Accessibility links
Petraeus' Fall As Stunning As The Career Before It The retired four-star general was on a fast track from an early age. David Petraeus was a West Point graduate with a doctoral degree from Princeton, who made a national name for himself by helping the Army rethink how it fights wars. Petraeus resigned as CIA director Friday, citing an extramarital affair. 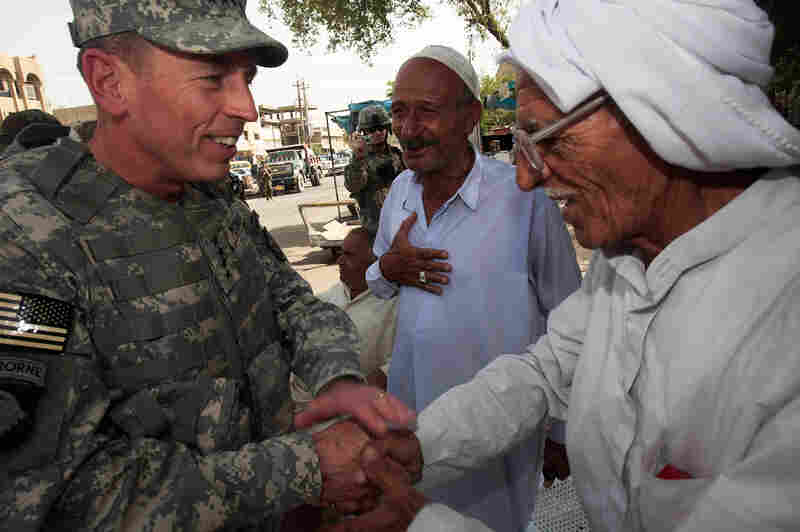 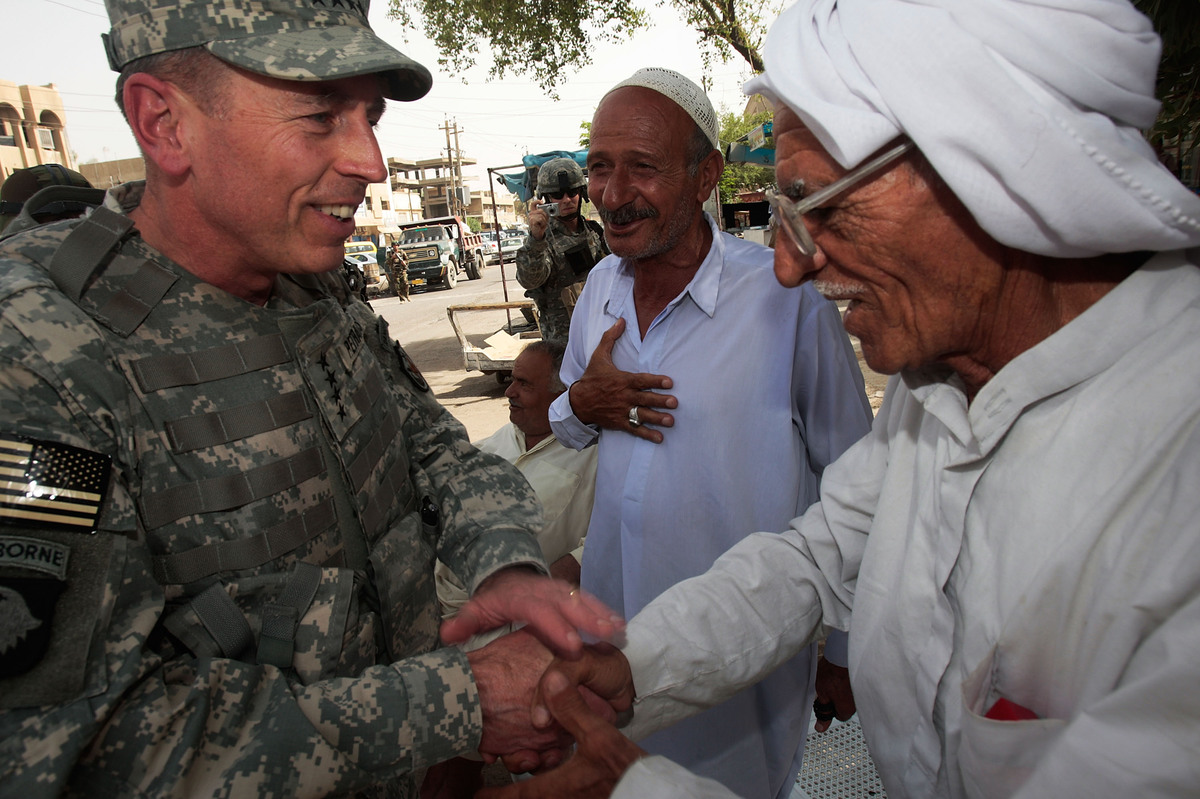 Gen. David Petraeus greets an Iraqi man at a tea shop in Baghdad in 2007. In 2011, Petraeus left the Army to become CIA director. He resigned Friday, citing an extramarital affair.

The resignation of CIA Director David Petraeus, the retired four-star general who stepped down late Friday citing an extramarital affair, brings to an end one of the most storied careers in modern U.S. military history.

Petraeus left the Army in August 2011 after nearly four decades in uniform. Before his retirement ceremony had even begun, he walked up on the empty stage, went over to the podium and tapped on the microphone. The general was doing his own mic check.

This is a man who leaves nothing to chance — which makes the nature of his professional fall from grace as stunning as the career that preceded it.

"When it comes to the art of the possible, there's Gen. Dave Petraeus, and then there's everybody else," former chairman of the Joint Chiefs of Staff Adm. Mike Mullen said at the retirement ceremony.

Petraeus was on a fast track from an early age. A West Point graduate, he nurtured relationships with key military leaders who became his mentors.

He got a doctoral degree from Princeton, and he made a national name for himself by helping the Army rethink how it fights wars like the ones in Afghanistan and Iraq.

His counterinsurgency strategy — COIN, as it's known in military lingo — was all about winning hearts and minds, getting buy-in from local populations so they would turn on the insurgents themselves.

'He Found A Way To Work'

In the summer of 2007, Petraeus walked through a Baghdad neighborhood that had seen a lot of violence. Dozens of U.S. Special Forces walked in front of him to seal the perimeter. Snipers perched on the rooftops, looking for threats.

Reporters donned full body armor, despite the 100-degree temperatures. Petraeus had no helmet, no flak jacket. He stopped along the street and talked casually with Iraqi shopkeepers.

A lot of this was for the benefit of the reporters. Petraeus wanted to make the statement that things were getting better. He knew he had to change perceptions about the war, and that meant talking to the media, which didn't always endear him to his fellow soldiers.

"The Army has never really liked Petraeus very much. They don't see him as being at the core of their culture," says Tom Ricks, a longtime national security journalist who has written extensively about Petraeus.

"Here is this sort of intellectual guy — Ph.D. from Princeton — who doesn't seem to mind the culture of Washington, reporters and politicians," Ricks said in an interview with NPR last year. "And at a time when they were saying nothing is working, he found a way to work in Iraq."

Petraeus went on to head the military's Central Command. Then in June 2010, President Obama asked him to return to the front lines as commander of U.S. and NATO operations in Afghanistan. About a year later, Petraeus was tapped to join Obama's Cabinet as the director of the CIA.

During his confirmation hearing, Petraeus took heat from senators concerned that the general would not be able to look critically at the war in Afghanistan from the director's chair.

"Clearly, I have views on the efforts in which I've been engaged. I've shared them, in the past with the agency's analysts, and I'll do so in the future," he said. "However, if confirmed, when I am in the Situation Room with the president, I will strive to present the agency position."

By most counts, he did just that, making a relatively seamless transition from military commander to the leader of the country's top intelligence agency. But after less than 15 months in the job, Petraeus is now out.

At his military retirement ceremony back in 2011, Petraeus thanked the supporters who referred to themselves as "COINdinistas," after his COIN strategy.

"Now, please rest assured, I am not out to give one last boost to the counterinsurgency field manual or to try recruit all you for COINdinista Nation," he said. "I do believe, however, that we have relearned since 9/11 the timeless lesson that we don't always get to fight the wars for which we're most prepared or most inclined."

In other words, the unexpected can change a war. It can also change a career.