Accessibility links
Far-Right Greek Party Rides Wave Of Economic Anger When Golden Dawn arrived on the political scene three years ago, many Greeks dismissed the party as neo-Nazi thugs. But in June, Golden Dawn won 18 of the 300 seats in Parliament, after campaigning on an anti-immigrant and anti-establishment message. Polls now show the party would double its share of seats if elections were held today. 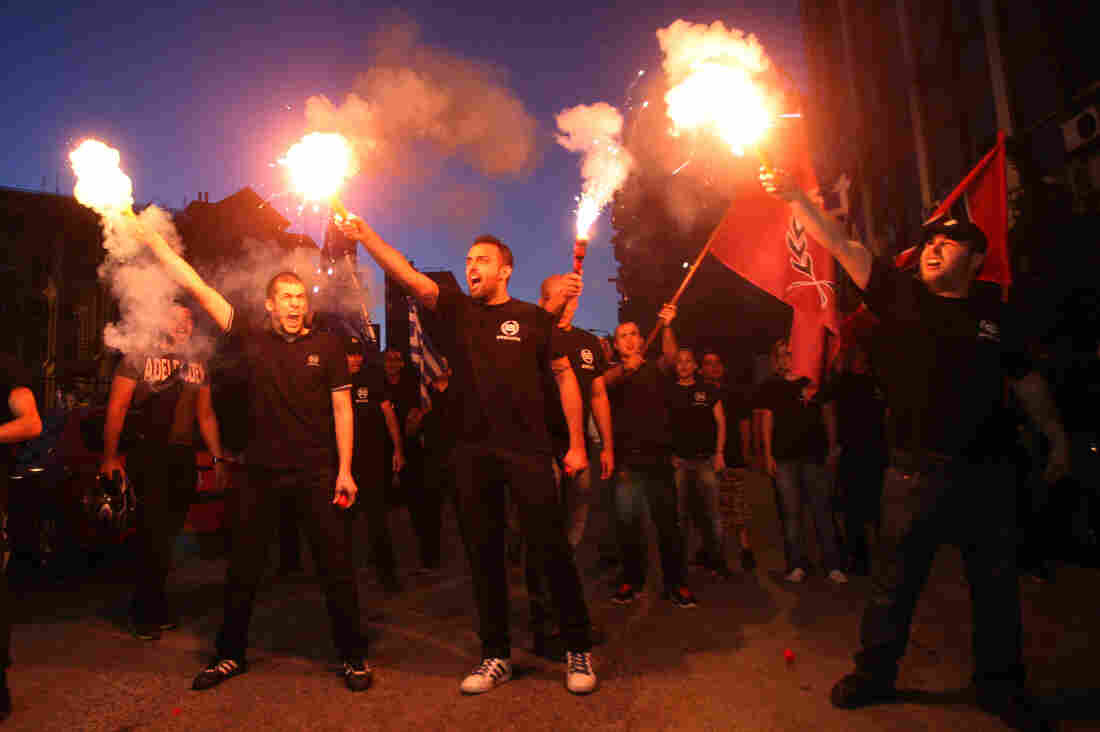 Members of the Greek ultranationalist Golden Dawn Party, sing the national anthem outside the party's office in Thessaloniki in June. The party's support has been boosted by anti-immigrant anger. Sakis Mitrolidis/AFP/Getty Images hide caption 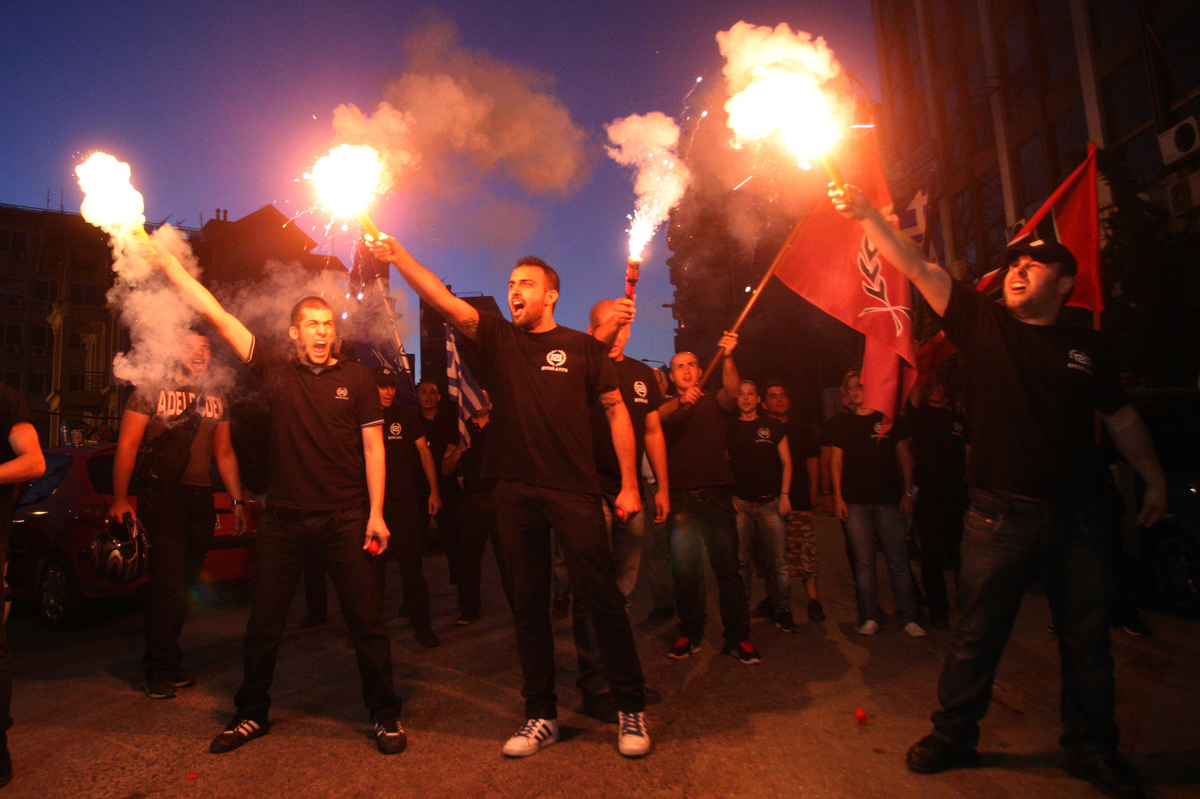 Members of the Greek ultranationalist Golden Dawn Party, sing the national anthem outside the party's office in Thessaloniki in June. The party's support has been boosted by anti-immigrant anger.

When German Chancellor Angela Merkel visited Athens last month, a few Greek Army reservists in fatigues greeted her with chants of "Get out, Nazis!" Like other Greeks, they are furious over the drastic budget cuts Germany and other eurozone countries are demanding in exchange for billions in bailout loans.

The protesters compared the situation to Nazi Germany's brutal occupation of Greece during World War II, when more than 400,000 Greeks died.

But investigative journalist Dimitris Psarras hears other echoes of the past.

"The economic crisis that Greece is facing today is similar to the one faced by Weimar Germany," he says. "Just as Germany struggled to pay reparations imposed by the victors of World War I, Greece is now struggling to pay off giant debt racked up by its own corrupt political system."

Even Prime Minister Antonis Samaras has used the reference. In Weimar Germany, paramilitaries from the far right and far left fought in the streets. Germans struggled through head-spinning economic and political crises.

Then, in 1933, after parliamentary elections that gave the Nazi Party the biggest share of the vote, Adolf Hitler came to power.

Now Greece may have its own version of the Nazis, Psarras says, the Golden Dawn Party. He has researched the movement for more than two decades and just released a book, The Black Bible of Golden Dawn. 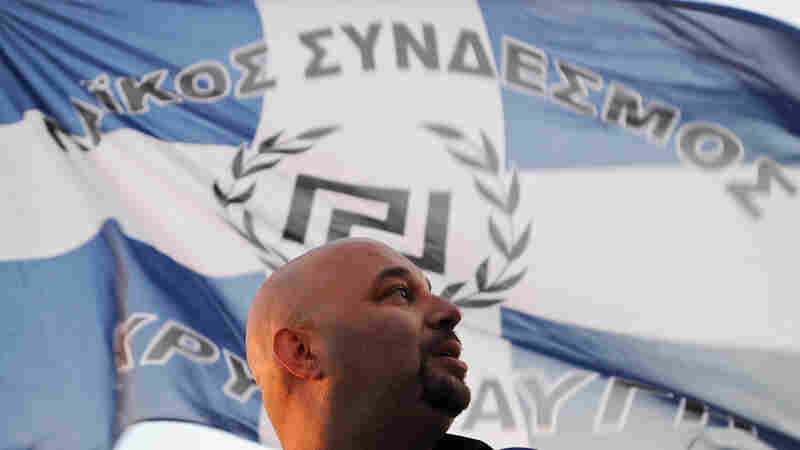 Ilias Panagiotaros, deputy of the Greek Parliament and member of Golden Dawn, looks on before giving a speech in Athens in June. Andreas Solaro/AFP/Getty Images hide caption 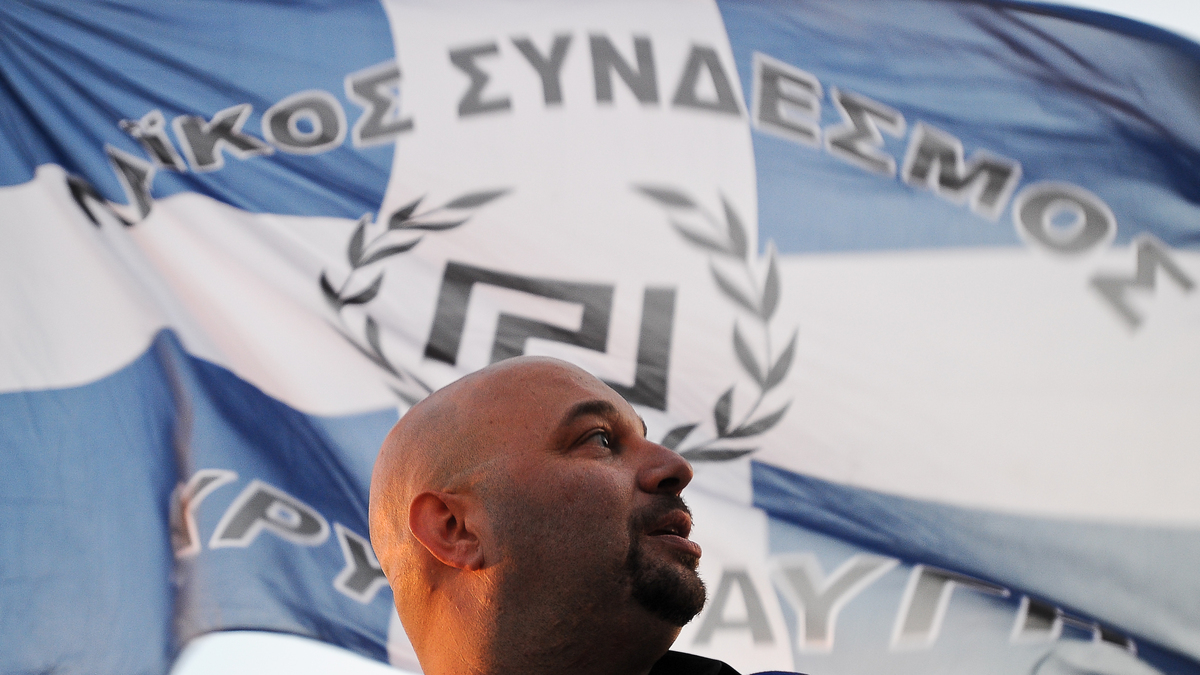 Ilias Panagiotaros, deputy of the Greek Parliament and member of Golden Dawn, looks on before giving a speech in Athens in June.

Party On the Rise

Golden Dawn members say they are nationalists and strongly reject the Nazi label.

But at rallies, party members chant, "Blood and Honor" — a slogan adapted from the Nazis — and they wear black T-shirts with a swastika-like ancient Greek symbol called a meandros.

The leader of the mob, Ilias Panagiotaros, shouted homophobic and xenophobic obscenities at the terrified crowd.

Panagiotaros is one of 18 Golden Dawn members elected to Parliament last June. The party won support by promising to kick out illegal immigrants and jail all corrupt politicians. They have also promised to erase household debt for low-wage earners and the unemployed.

"Every day we are growing," Panagiotaros says. "And very soon we're going to be ruling this country, and laws are going to be enforced."

Indeed, Golden Dawn is rising in opinion surveys and could win as many as 36 seats in the 300-member Parliament, were elections held today.

Panagiotaros recently told the BBC that Greeks are divided.

"Greek society is ready to have a fight, a new type of civil war," he said. "On the one side there will be nationalists like us, and Greeks who want our country to be as it used to be, and on the other side illegal immigrants, anarchists and all those who have destroyed Athens several times." 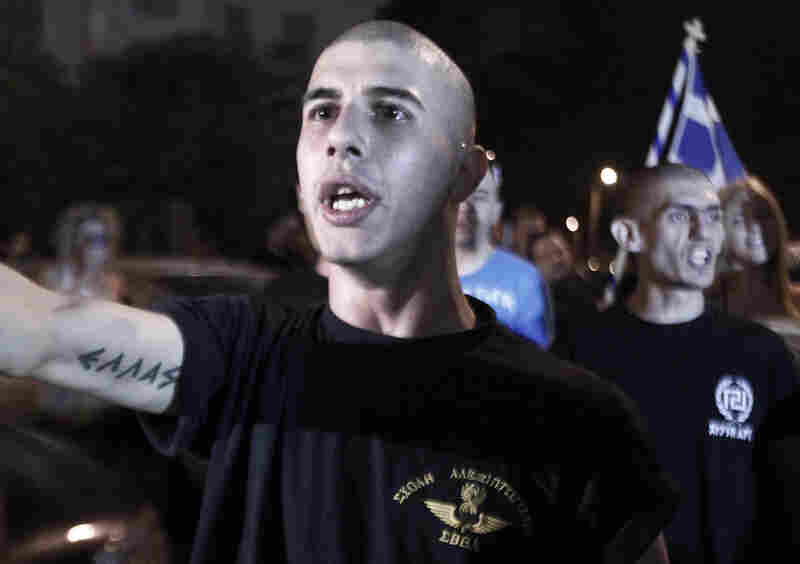 Supporters of Golden Dawn celebrate the results of the elections outside of their Thessaloniki headquarters in June. The tattoo reads "Greece." Dimitri Messinis/AP hide caption 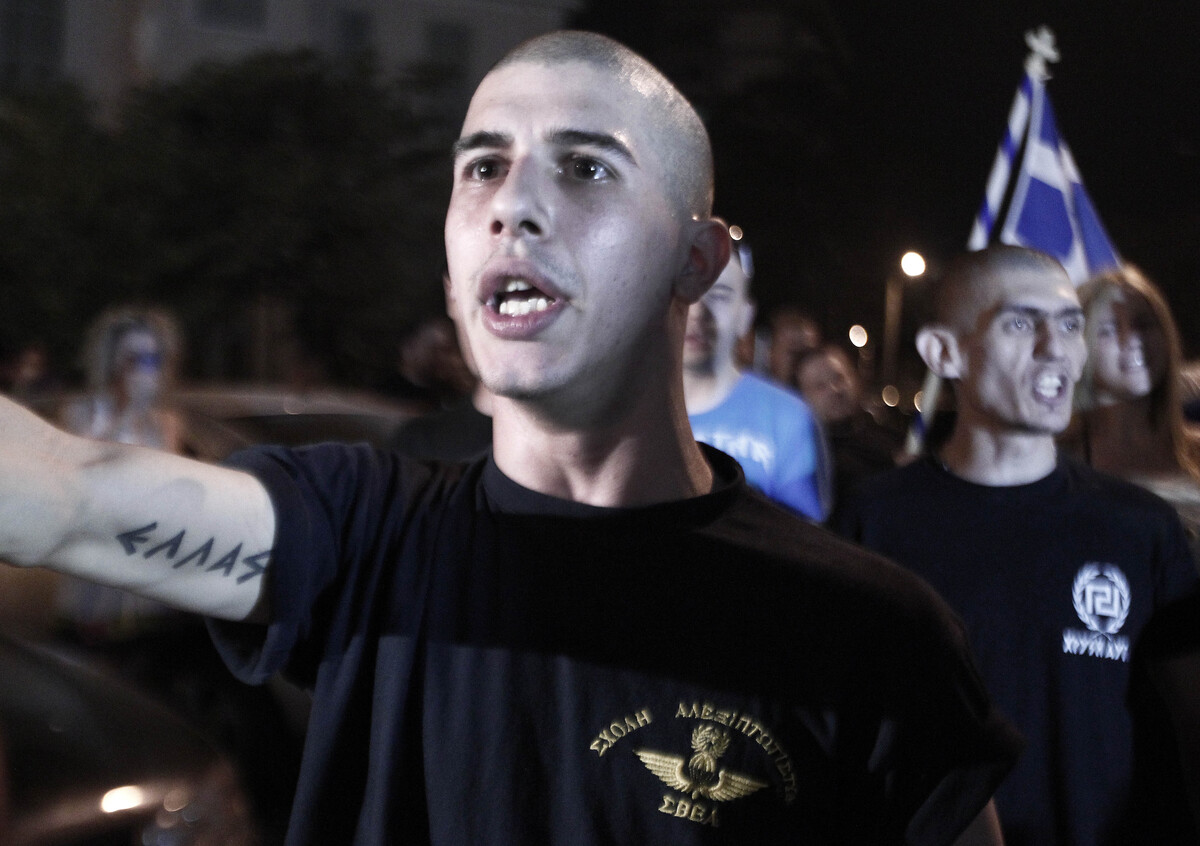 Supporters of Golden Dawn celebrate the results of the elections outside of their Thessaloniki headquarters in June. The tattoo reads "Greece."

But it was another Golden Dawn lawmaker, a death-metal bassist named Giorgos Germenis, who helped smash the market stalls of immigrant vendors in the seaside town of Rafina this September.

Poor migrants are Golden Dawn's main target — and they're an easy one.

Issa Ahmed Agboluaje, a vendor from Ghana, says a gang of men in black T-shirts cornered him and a Nigerian friend near a church this spring.

"They beat him so much, but they stabbed me," he says, lifting up his shirt to reveal a scar on his stomach. "When I escaped from them, I saw my body was full of blood."

They have the support of poor central Athens neighborhoods such as Agios Panteleimonas, where many residents say the immigrants are violent.

A mob of 150 Greeks, including some Golden Dawn members, recently destroyed migrant-owned shops in the neighborhood after a migrant stabbed a Greek barber.

Most newcomers are Africans, Afghans and Pakistanis who slip into the European Union through Greece, crossing the border from Turkey. More than 350,000 undocumented migrants reside in Greece, according to the Public Order Ministry. Many are desperate and living in squalor.

Public Order Minister Nikos Dendias calls them "invaders." On his orders, police have now detained more than 40,000 foreigners — most of them dark-skinned — to check for residency permits. Those without permits are supposed to be deported.

Stathis Boukouras, a Golden Dawn lawmaker from the southern city of Corinth, blames undocumented migrants for a rise in crime in urban areas. He wants them out of Greece immediately. But he denies that Golden Dawn assaults them.

"If some kid decides to wear a Golden Dawn T-shirt and beat up a Pakistani, that's not our fault," Boukouras says. "We didn't order him to do it."

But Psarras says, the party clearly promotes violence. Its supporters, who are fed up with a failing Greek state, actually welcome it.

"They consider it violence against the system," he says. "I've heard many people say, 'Yes, I know they're Nazis. I know they're violent. But I voted for them so they could get into Parliament and beat up lawmakers and government ministers.' "

Golden Dawn supporters are so angry about the state of Greece, he says, that they don't care about the consequences. All they want is revenge.