Accessibility links
U.S. Rethinks Security As Mideast Oil Imports Drop U.S. foreign policy and military commitments in the Middle East have long been tied to U.S. dependence on oil from the region. But imports from the Persian Gulf have actually declined sharply in recent years, which may lead to a realignment of policy priorities and an easing up of U.S. presence there. 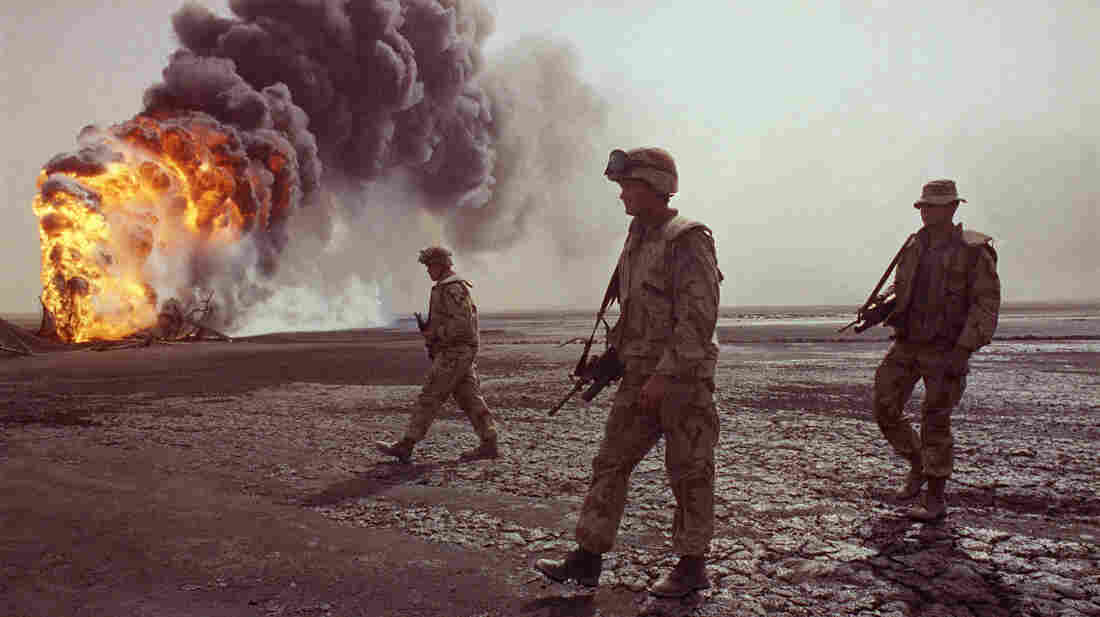 A U.S. Marine patrol walks across the charred oil landscape near a burning well near Kuwait City in March 1991. Concerns about oil supply were at play when the U.S. and its allies intervened during the Iraqi invasion of Kuwait in 1990. But American policy is changing now that Mideast oil imports to the U.S. are declining. John Gaps III/AP hide caption

Within the next two decades, the United States may barely need any oil from the Persian Gulf, due in large part to increased domestic production. That dramatic shift could shake the foundation of U.S. interests in the Middle East.

For more than 40 years, the U.S. security presence in the region has been rooted in one reality: It is where our oil comes from. The need to keep the oil flowing has meant U.S. administrations cozy up to Saudi Arabia. It has meant the U.S. military keeps aircraft carriers stationed around the Gulf. And it has meant a U.S. willingness to go to war to keep oil shipping lanes open, a position first enunciated by President Jimmy Carter.

"An attempt by any outside force to gain control of the Persian Gulf region will be regarded as an assault on the vital interests of the United States of America," Carter declared in his 1980 State of the Union address. "Such an assault," Carter said, "will be repelled by any means necessary, including military force."

Where The U.S. Gets Its Oil

The Carter Doctrine has guided U.S. policy ever since.

When Iraq invaded Kuwait in 1990, threatening the Gulf oil supply, the United States and its allies intervened. The public aim was to help Kuwait restore its sovereignty, but that did not tell the whole story.

"There were a lot of oil implications underneath that whole episode and our response to it," says Roger Altman, who served as deputy Treasury secretary in the Clinton administration. "I'm not saying we wouldn't have liberated Kuwait absent the oil factors, but they had to play a big role."

The oil picture has changed sharply since then, however. The share of U.S. oil coming from the Gulf is down by about one-third.

Much of that oil is going instead to China, Japan and Korea.

"The Asian states are really the prime consumers of Middle East oil," says Mikkal Herberg, director of the energy security program at the National Bureau of Asian Research. "We get really very little oil from the Gulf here in the U.S. anymore. In the future we will need virtually no Persian Gulf oil to speak of."

The United States is now producing more of its own oil. Plus, it's getting more from Canada, Mexico and Brazil.

A new report from the International Energy Agency, or IEA, highlights the shift in the Middle East oil trade. The Paris-based organization projects that by 2035 nearly 90 percent of Persian Gulf oil exports will go to Asia, with the United States getting a negligible amount.

Demand for Mideast oil is dropping in the U.S. and Europe, but growing dramatically in China and India.

Units=millions of barrels per day2035 figures are projections.

The sharply reduced dependence on Persian Gulf oil is raising questions about whether the Carter Doctrine should still apply.

"The U.S. has been the guarantor of the sea lanes and the Gulf producers because we felt that was vital to U.S. energy security interests," says Herberg of the National Bureau of Asian Research. "As we become quasi energy-independent it's likely that there will be questioning here in the U.S. 'Do we really need to carry that load?' "

If protecting the Persian Gulf oil supply doesn't matter so much anymore, would that justify some U.S. disengagement from the Middle East?

Persian Gulf oil will remain important, and somebody will need to secure those Gulf shipping lanes. China, poised to become the No. 1 buyer of Gulf oil, is now benefiting from the huge U.S. security presence in the region. Perhaps the United States could turn over security responsibilities in the Persian Gulf to China.

"Strategically, that's not something we really want to do," says Herberg. "But in an oil sense they are now the prime beneficiary of this. [They are a] free rider on these free sea lanes the U.S. keeps open. So how do you manage that conflict?"

The IEA, which advises governments on energy policy, hinted in its 2012 World Energy Outlook that the shift in the oil trade could redefine military alliances. With the U.S. defense budget under strain, that argument resonates.

"It's insane that we have the 5th Fleet of the U.S. Navy tied up there to protect oil that ends up in China and Europe," T. Boone Pickens, the energy tycoon, was quoted as saying recently in Parade magazine. 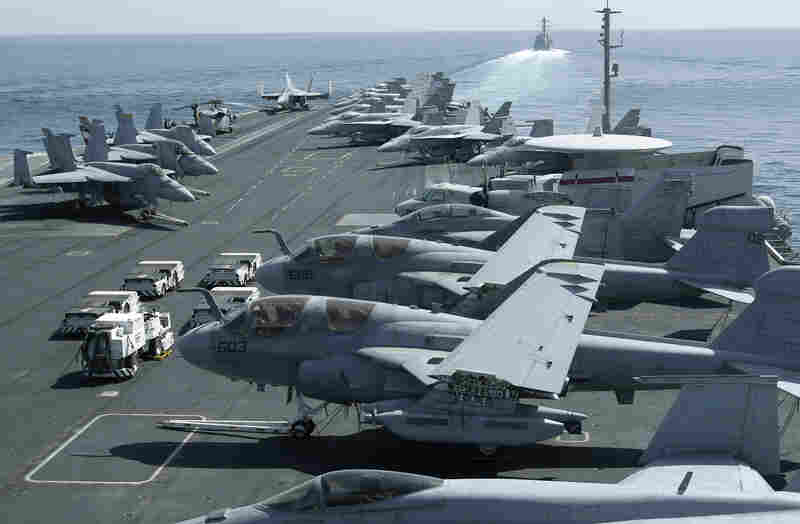 The U.S. maintains a strong naval presence in the Persian Gulf in order to safeguard key shipping lanes. Here, aircraft are parked on the flight deck of the USS Abraham Lincoln as a U.S. destroyer patrols the Arabian Sea in the Strait of Hormuz in February. Hassan Ammar/AP hide caption 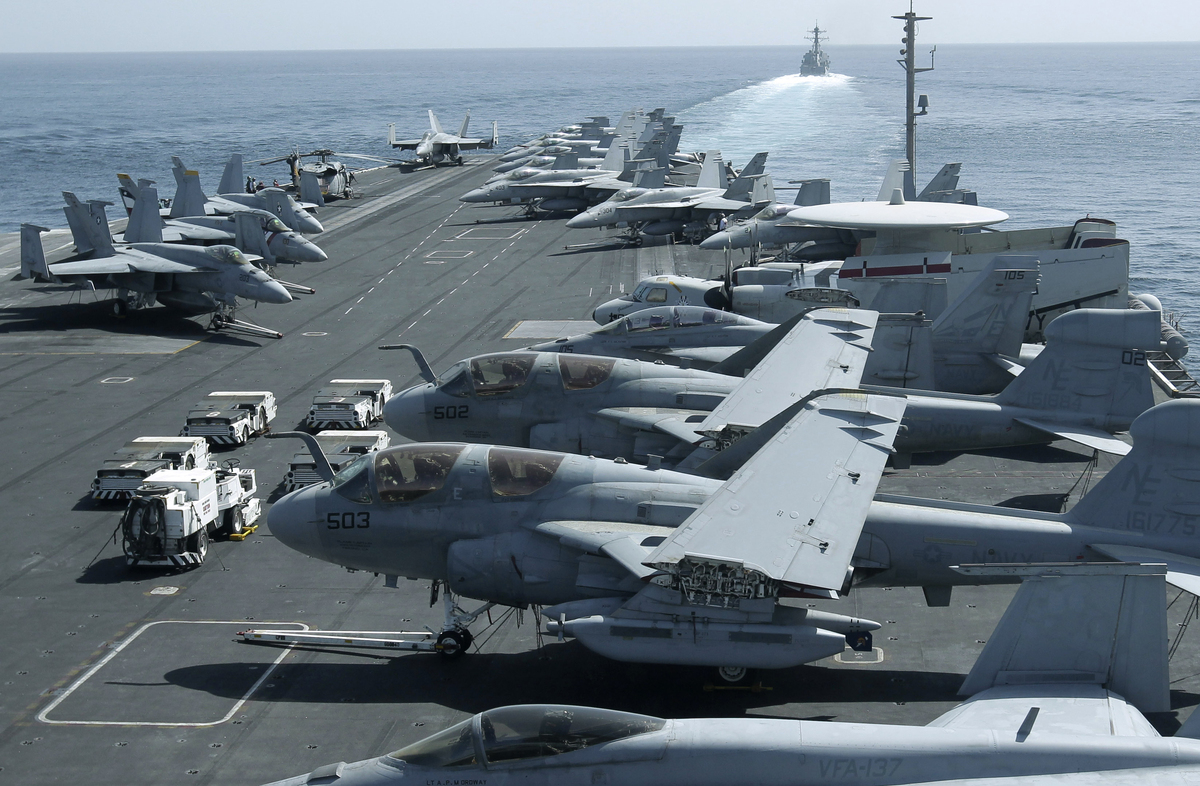 The U.S. maintains a strong naval presence in the Persian Gulf in order to safeguard key shipping lanes. Here, aircraft are parked on the flight deck of the USS Abraham Lincoln as a U.S. destroyer patrols the Arabian Sea in the Strait of Hormuz in February.

The Pentagon's new defense strategy, released last January, said the United States should "rebalance" toward the Asia Pacific region. But it did not call for a downgrading of the U.S. role in the Middle East.

The Question Of The Global Oil Market

Few U.S. defense officials would feel comfortable with the Chinese navy replacing the U.S. Navy in the Persian Gulf. But there may also be an oil-related rationale for maintaining the U.S. security presence in the Gulf.

Oil is traded in a global market. The U.S. may not need as much oil from the Persian Gulf as it used to, but it does have an interest in keeping that oil flowing. A disruption of the Gulf oil trade would raise the oil price for everybody.

"In a sense, the U.S. has a new dilemma," says Herberg. "Its access to oil is increasingly very secure in the Western Hemisphere. [There is] little reliance on the Gulf. But in terms of the oil price, the global oil markets, and the impact on the global and U.S. economy, that flow of oil from the Gulf remains a vital interest."

If the price of oil were to skyrocket because of some trouble in the Persian Gulf, it would mean a bigger trade deficit in the energy sector, a bigger share of the U.S. national income leaving the country.

Carl Pope, the former chairman of the Sierra Club, says that is the reality to keep in mind.

"It's not so much the barrels of oil we import," Pope says. "It's the hundreds of billions of dollars we export that threaten our security."

Those U.S. aircraft carriers in the Persian Gulf may be needed for a while yet.