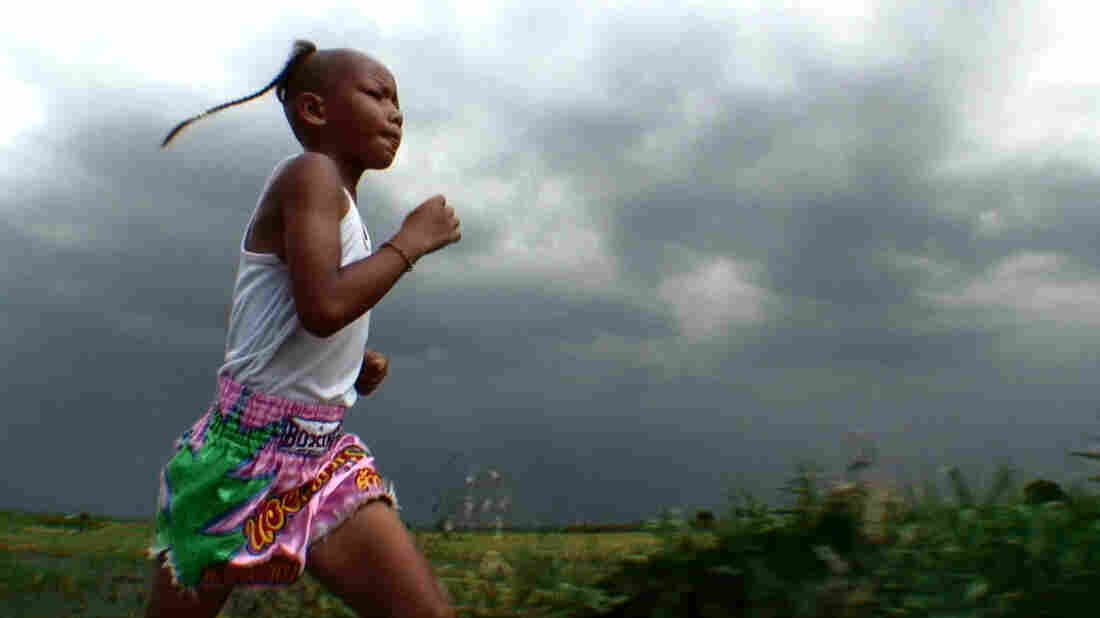 Buffalo Girls follows two 8-year-old professional Muay Thai fighters. Pet Chor Chanachai not only fights to support her family, but does so while suffering from a heart defect. 108 Media hide caption

In Thai with subtitles

It's no secret that, in many parts of the world, children don't experience what affluent Westerners would term "childhood." Still, even the most hardened documentary buffs may be dumbfounded by Buffalo Girls, a look at two 8-year-old Thai girls who support their respective families.

They do so by hitting each other in the head.

Stam and Pet compete in Muay Thai, a form of boxing in which kicking as well as punching is allowed. As depicted in fictional action movies, Muay Thai is both graceful and brutal. Practiced by 8-year-olds, it's neither.

Stam and Pet are not seriously injured in the bouts filmed here, although one adult observer acknowledges that broken arms and legs are fairly common among Thailand's 30,000 — yes, 30,000 — child boxers. 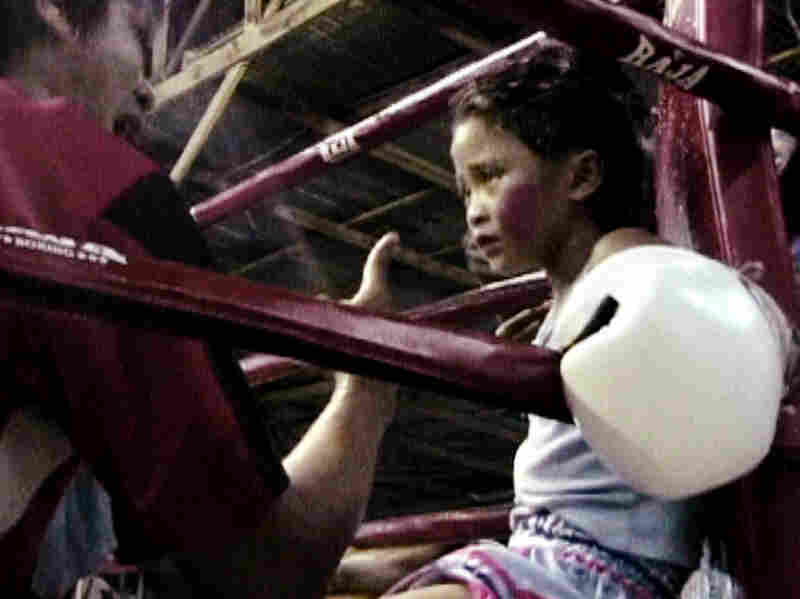 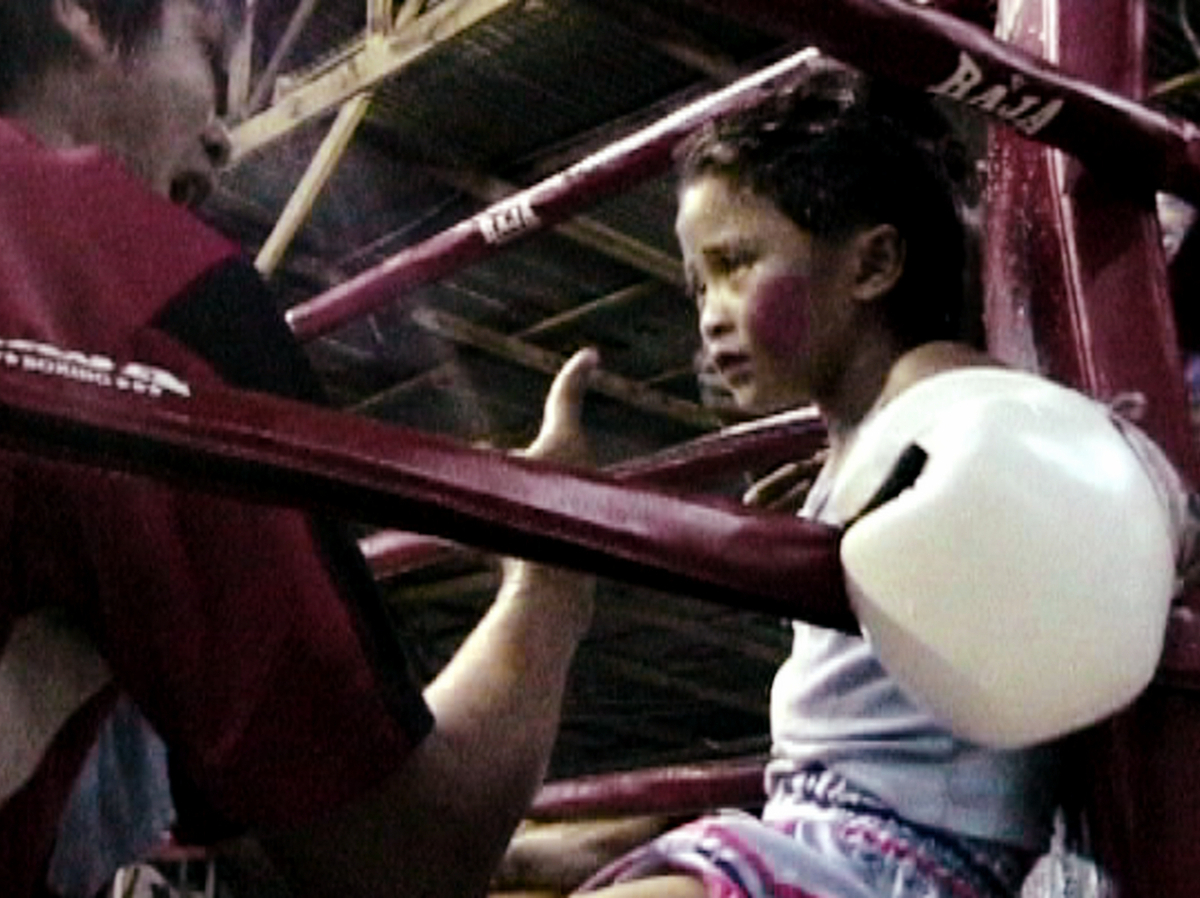 Director Todd Kellstein, an American music-video veteran, says that when he first saw Thai kids in boxing rings, he found the spectacle "horrible." Yet Buffalo Girls is not an expose or a polemic. It accepts that Stam and Pet — and their parents — have made an understandable choice, given the poverty of their families and regions. (At one point, the boxers travel for a bout to an urban red-light district, where the sight of writhing dancers suggests that there are worse ways for Thai girls to make some cash.)

In a rare bit of explication, the movie notes that "buffalo" has two connotations in Thailand. For rural folks, it refers to the strength and perseverance of the large animals, called "kwai" in Thai. To urbanites, however, a buffalo is a hick.

Stam and Pet are country girls, with few prospects for economic advancement. Each is in the 22-kilo (about 48-pound) weight class, which is lucrative because it draws enthusiastic bettors. They fight because, as Stam says, "I want lots of money to make my mom and dad happy."

Stam also goes to school, and helps her mother at the family's fruit and vegetable stand. But her parents' income is dwarfed by what she can earn from a four-round match. The family has a half-built house on its farm, and is counting on Stam's winnings to complete it.

Pet's earnings aren't pledged to any specific project, but her sacrifice to the family is perhaps even more impressive. She's struggled with a congenital heart defect, and had surgery two years before the documentary was filmed. To make an offering for Pet's continued survival, her mother shaved her head, save for two small patches of hair that are collected into pigtails.

Stam and Pet box three times during the movie, but this isn't Raging Buffalo. Kellstein shoots the fights from a distance, without close-ups of blows and injuries. Often, he strips away the combat sounds and crowd noises, replacing them with Scott Hackwith's ethereal music. The director is more interested in the family dynamic than the spectacle of little girls boxing.

That's understandable, in part because Stam and Pet fight like, well, small children. What the movie shows of their contests doesn't reveal any great skill. Their battles are all grit.

This suggests a question the director never poses: What's the appeal of such contests? "Girl fighting is a hit now," says one adult, which begins and ends the movie's commentary. Stam, Pet and their families don't seem to think much about what they're doing. Neither does Buffalo Girls.