Accessibility links
Obama's Visit To Myanmar: Too Much, Too Soon? Some argue the first visit by a sitting U.S. president to the country also known as Burma is too much reward for not enough political reform. But analysts say the trip could be a success if it focuses on the work still to be done. 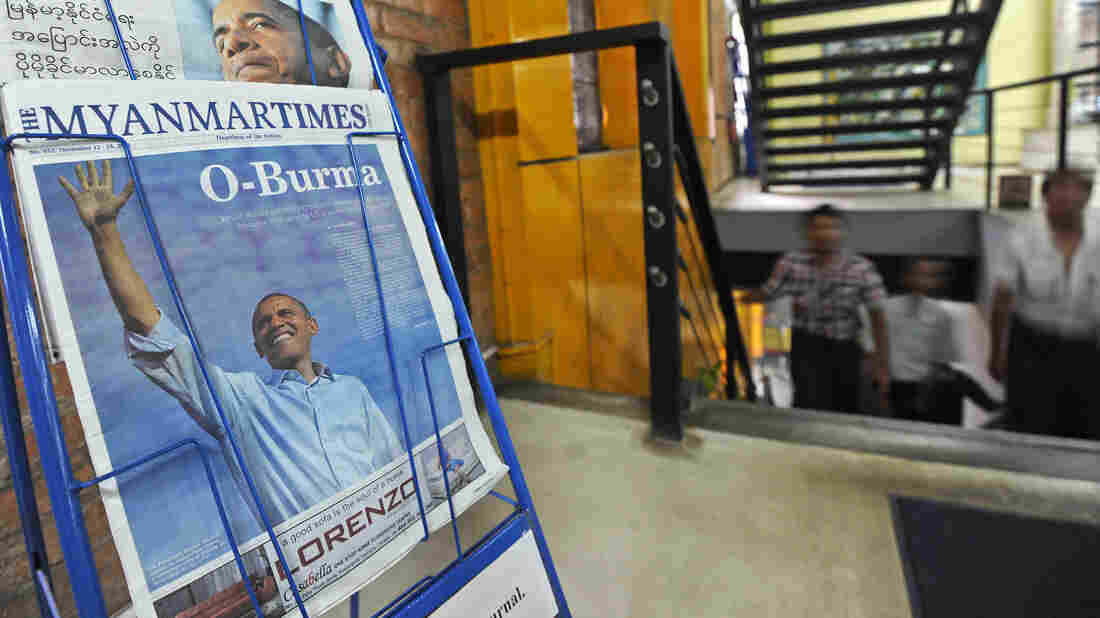 A newspaper with a front-page photo of President Obama is displayed at a press house in downtown Yangon, Myanmar, on Thursday, ahead of Obama's visit. Soe Than Win/AFP/Getty Images hide caption

When President Obama sets off to Asia this weekend to highlight his so-called pivot to the region, he will make a bit of history: Obama will become the first sitting U.S. president to visit Myanmar.

The country, also known as Burma, was a pariah state for decades, ruled by a ruthless military dictatorship. That is changing, and the Obama administration has encouraged a dramatic reform process in the country. But it may be too early for a victory lap.

Aung Din, a Burmese exile in Washington, D.C., says the U.S. response to the changes in his homeland has been much more than enough. The Obama administration has suspended most sanctions and sent an ambassador to Myanmar.

But Aung Din says this is not the right time for Obama to go.

"I think the United States government response is too much, too fast, and too generous," he says.

The former student leader says he believes there are still more than 300 political prisoners in Myanmar and an increasing number of displaced people from ethnic conflicts and communal violence. He also doesn't sound confident in the reforms promoted by President Thein Sein.

"His reform process is not good enough to get the credit or acknowledgment or endorsement from President Obama yet," Aung Din says. "He still needs to do a lot."

Obama will also attend a regional summit in Cambodia and visit Thailand on his trip. In Myanmar, he'll meet with Thein Sein and will visit Aung San Suu Kyi, the Nobel Prize-winning democracy activist who is now a member of parliament.

The Obama administration sees its engagement with Myanmar as a major success of its "pivot" to Asia. But Michael Green of the Center for Strategic and International Studies says the president needs to be more circumspect.

"I think if the president goes to Burma not as a victory lap to sort of champion this intriguing and fascinating piece of the pivot, but rather as an opportunity to encourage and push for more reform and acknowledge what has to be done, I think it will be a successful trip," Green says.

He says the trip could be a boost for Thein Sein, as well as for Suu Kyi, who is said to be less than enthusiastic about the timing of Obama's visit.

"In an odd way, the general and the lady are on this life raft shooting the rapids together, and we need them to keep at it," Green says.

Suu Kyi is often referred to as "the lady."

'At The Very Beginning'

Tom Malinowski, Washington director of Human Rights Watch, says there are many risks.

"Burma's really at the very beginning of that process. It could still be derailed by a military that does not want to give up power, by ethnic violence," Malinowski says. "And a lot of the things that the United States has been asking the government to do in the last few months, they've not done."

He says the government of Myanmar has doled out political prisoners to win international favor — rather than keeping its promise to release them all. Malinowski also says no one, not even Suu Kyi, has helped tamp down a conflict that has left hundreds dead and tens of thousands on the run.

"We've seen in the last few months a virus of ethnic and religious hatred spread through Burma, directed at Muslims in general and the Rohingya people living in the Arakan [Rakhine] state in particular," Malinowski says.

Secretary of State Hillary Clinton says Obama will discuss that conflict, and will call for calm and meaningful dialogue to resolve the issue of stateless Muslims in Myanmar.

The future of the country is not certain, she says, and Obama will have much to talk about while he's there.