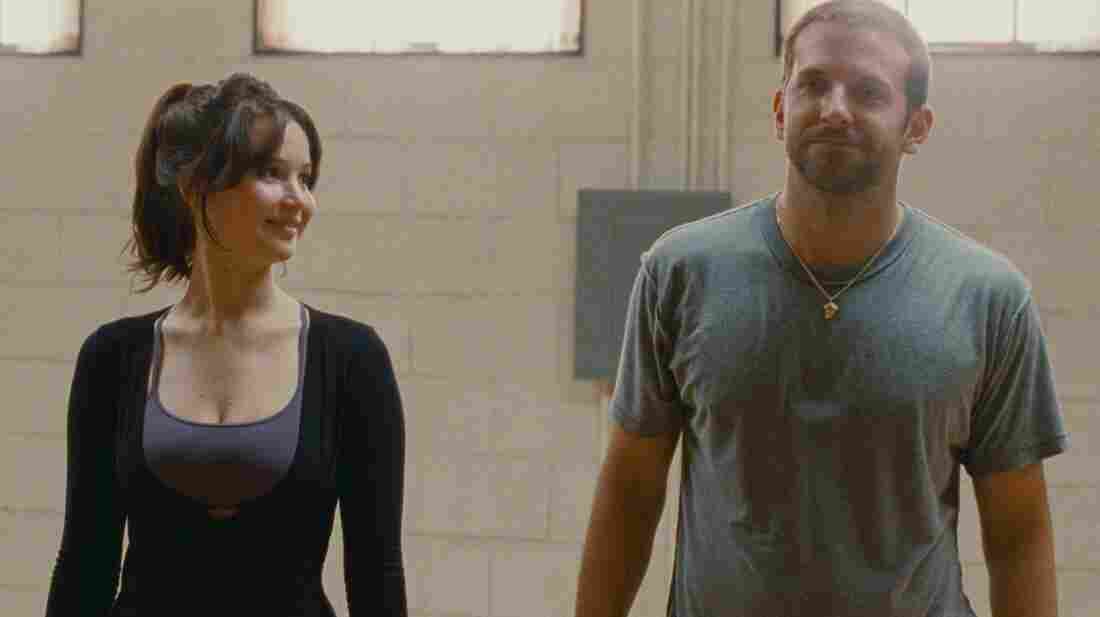 Tiffany (Jennifer Lawrence) and Pat (Bradley Cooper) are damaged souls looking for the kind of stability they shouldn't be able to find in each other. The Weinstein Co. hide caption

Rated R for language and some sexual content/nudity

The best thing about David O. Russell is that he cultivates his disequilibrium. In Silver Linings Playbook, his hero is disturbed and his heroine possibly more so, and his other characters have a grip on reality that is only marginally more secure. Russell might have made them seem the dreaded "q" word — quirky — and OK, he does, a bit, at the end, which broadly conforms to the rom-com template. But until then, Bradley Cooper's Pat Solatano is someone you'd be less likely to dream about than get a restraining order against.

In fact, that's what his wife has done at the start, which finds Pat, diagnosed with bipolar disorder, in a mental hospital — a place where the phrase "silver lining" as in "every cloud has a ... " is a mantra. In the novel by Matthew Quick, he's been there for four years after violently assaulting someone. Here, it's a mere eight months — and he acts like he could have used the extra three-plus years.

After his mother, played by Jacki Weaver, drives him home to the Philly suburbs, he throws A Farewell to Arms through his bedroom window because of the tragic ending, and he smashes furniture outside his psychiatrist's office when "Ma Cherie Amour" — his wedding song — plays in the waiting room.

While Pat pines for the reunion with his wife that he's certain will come, he lives with his mother and obsessive-compulsive father, Robert De Niro's Pat Sr., who has started gambling heavily on the Philadelphia Eagles.

He spends his days working out and running, until his friend Ronnie, played by John Ortiz, invites him to dinner — where Ronnie's wife (Julia Stiles) fixes him up with her widowed sister, Jennifer Lawrence's Tiffany. We think, "Who would fix her sister up with him?" — until we meet Tiffany, and wonder which of the two has more to fear. 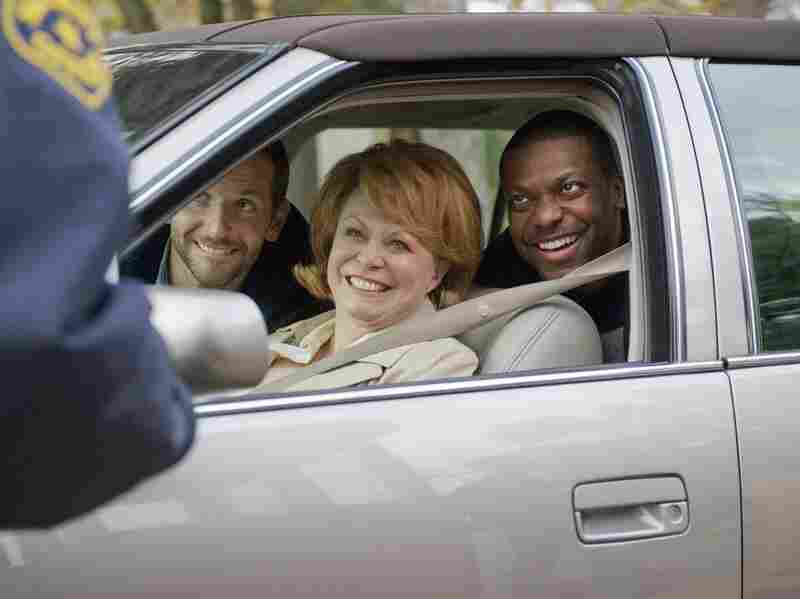 Jacki Weaver and Chris Tucker also help round out a team of actors who score a touchdown with the critics. The Weinstein Co. hide caption 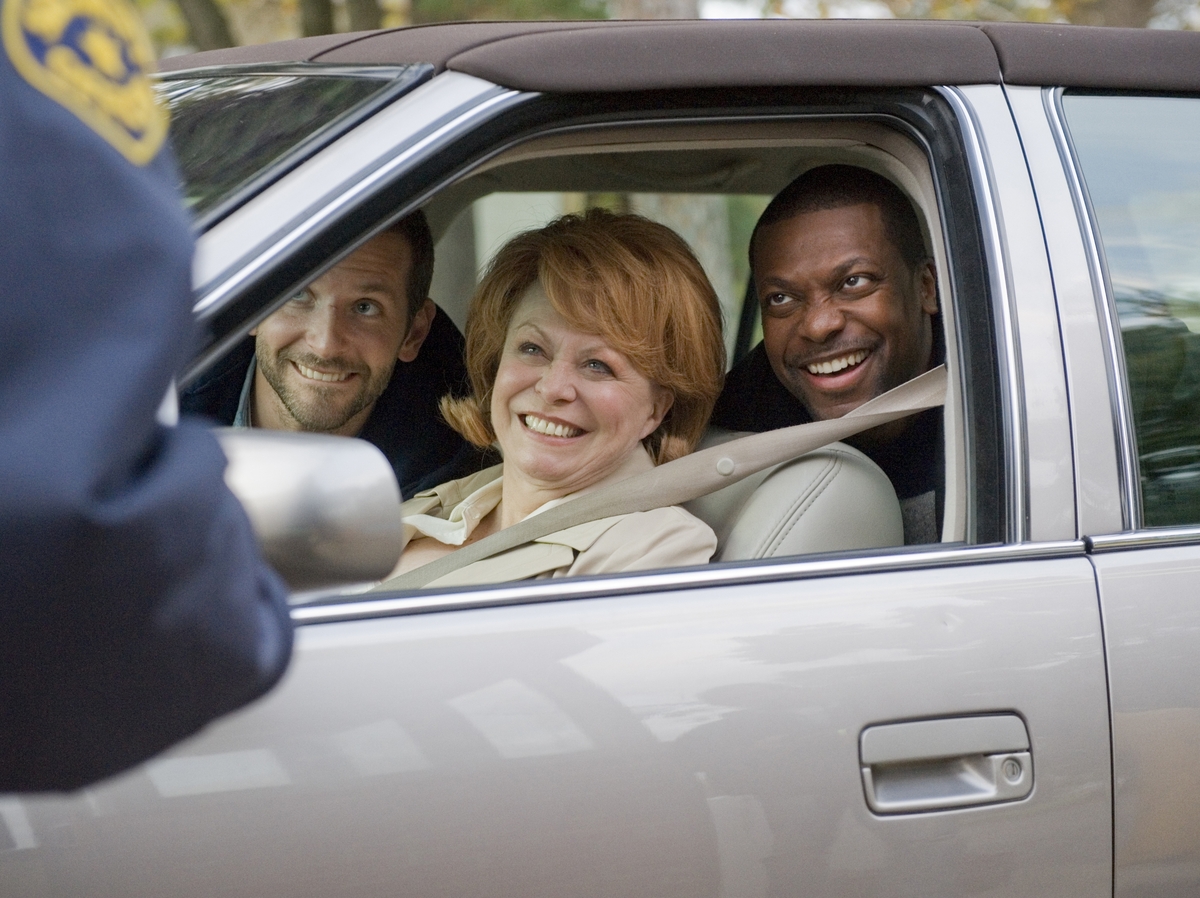 Jacki Weaver and Chris Tucker also help round out a team of actors who score a touchdown with the critics.

To director Russell, Pat and Tiffany are a hell-match made in heaven. Russell is, by all reports, a tempestuous fellow given to screaming matches and fistfights with actors — and I mention that not for gossip's sake, but because his films are similarly unruly: Think of Flirting with Disaster, Three Kings, I Heart Huckabees and The Fighter, in which the title character is the least pugnacious. Russell relishes the escalating momentum of people rubbing each other wrong. Although Tiffany likes Pat, Pat doesn't want to date her; he wants his wife back. But despite — or maybe because of — the friction, they bond indelibly.

Actors covet roles like these, and, indeed, Cooper co-executive-produced Silver Linings Playbook to get it made. To convey Pat's state of mind, he speaks loudly, with little variation in pitch. His eyes are unblinking. It's not an imaginative performance, but it's scary pure.

It's Lawrence who stunned me. I loved her in Winter's Bone and The Hunger Games, but she's very young — I didn't think she had this kind of deep-toned, layered weirdness in her. Chris Tucker plays a fellow patient of Pat's whose few scenes are dazzling in their topsy-turvy rhythms, and the rest of the cast is fine, although De Niro's funny turn struck me as Method throat-clearing with no launch — but that's the role.

Silver Linings Playbook has a conventional climax. There's a dance competition featuring nondancers Pat and Tiffany with a lot riding on it. It's exhilarating but unsurprising. I like the movie best when it's discombobulated.

Here's my favorite line, Tiffany's, when she intervenes to keep Pat from being arrested after a fight. The officer recognizes her as the wife of a late cop, saying, "You're Tommy's widow," and she says, "Yes, I'm Tommy's crazy whore widow minus the whore thing, sometimes."

The zigs and zags in that one line — the exhibitionism, self-hatred and defensiveness — could make you crazy trying to diagram. Which is just how David O. Russell likes it. Me too.