Accessibility links
Want To Help Sandy Victims? Send Cash, Not Clothes Lots of people and companies are making donations to help the victims of Hurricane Sandy, but food and clothing aren't always the most helpful things. Most charities would prefer money so they can target help to the greatest needs. 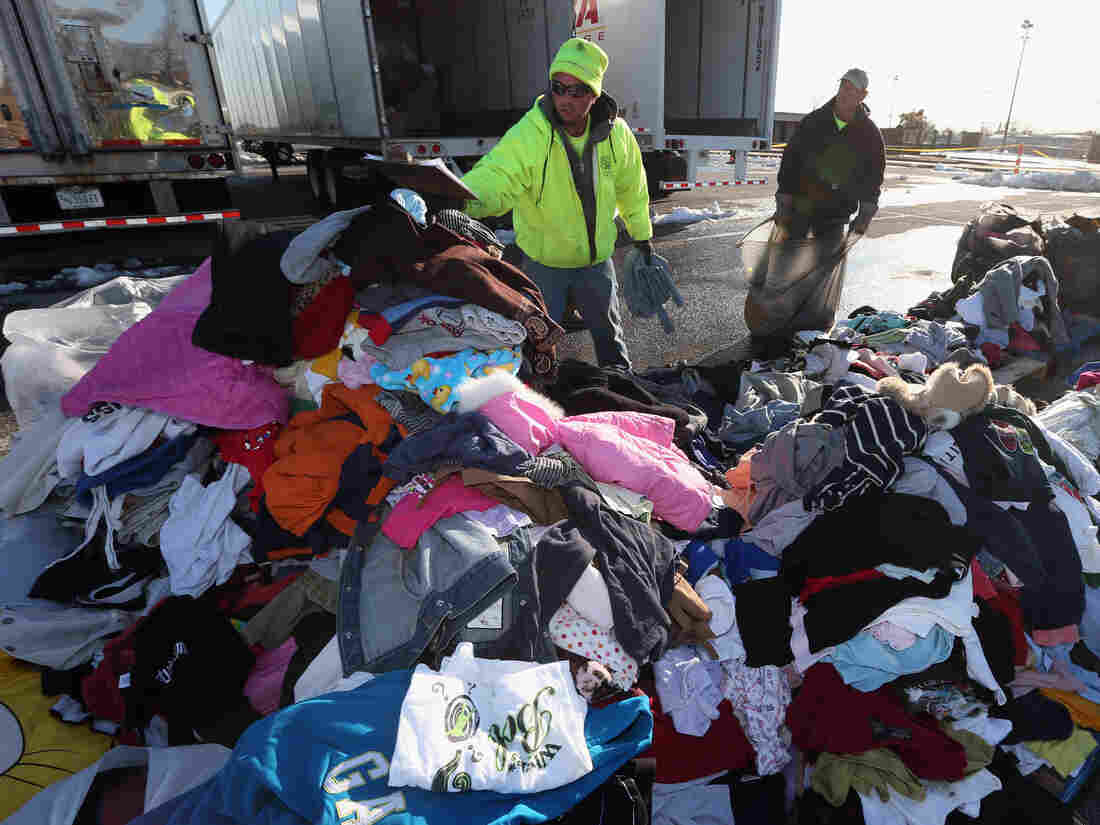 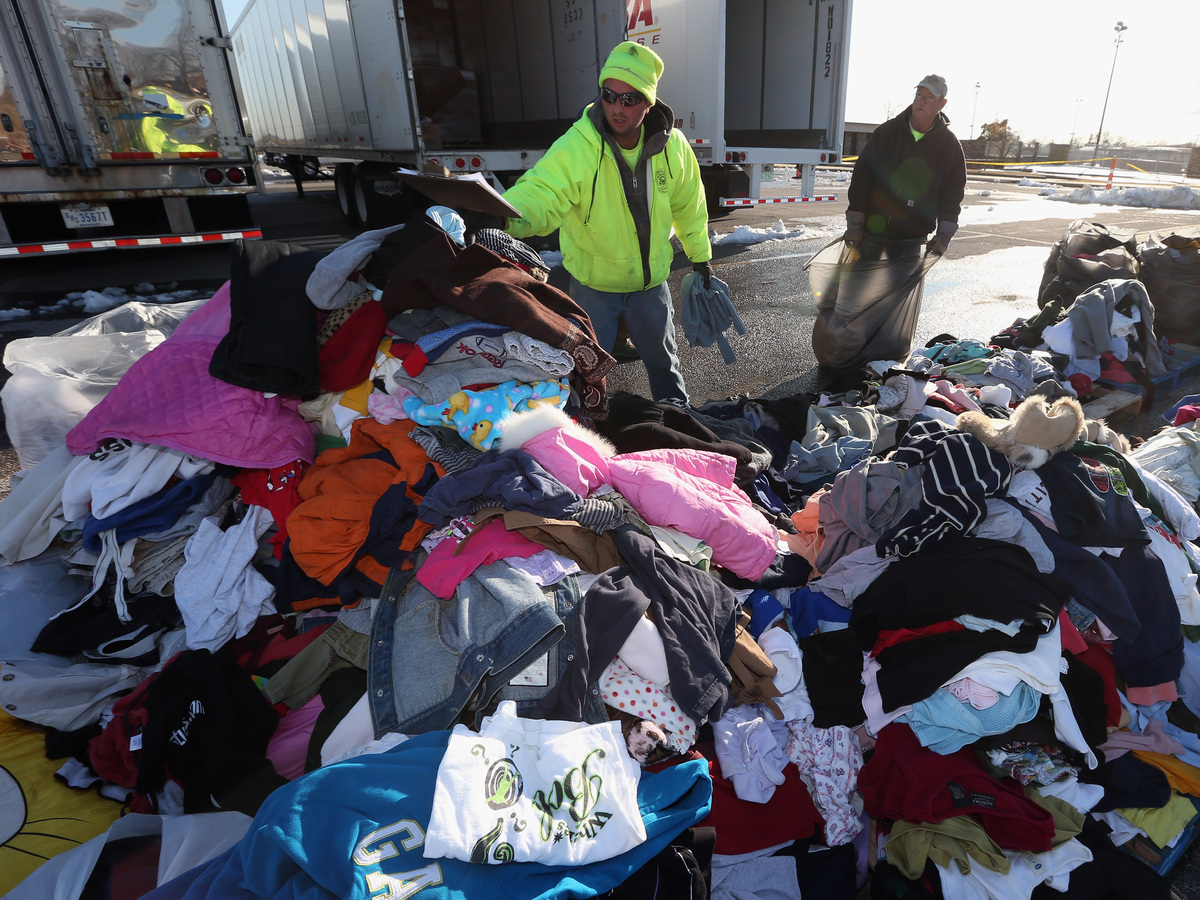 Whenever there's a disaster, people want to give, and Hurricane Sandy is no exception. According to The Chronicle of Philanthropy, U.S. charities collected more than $174 million in donations as of Nov. 9 to help respond to the storm.

But it's not only money that has been pouring in. Relief programs have also received mountains of clothes, food and other supplies, not all of which are needed. 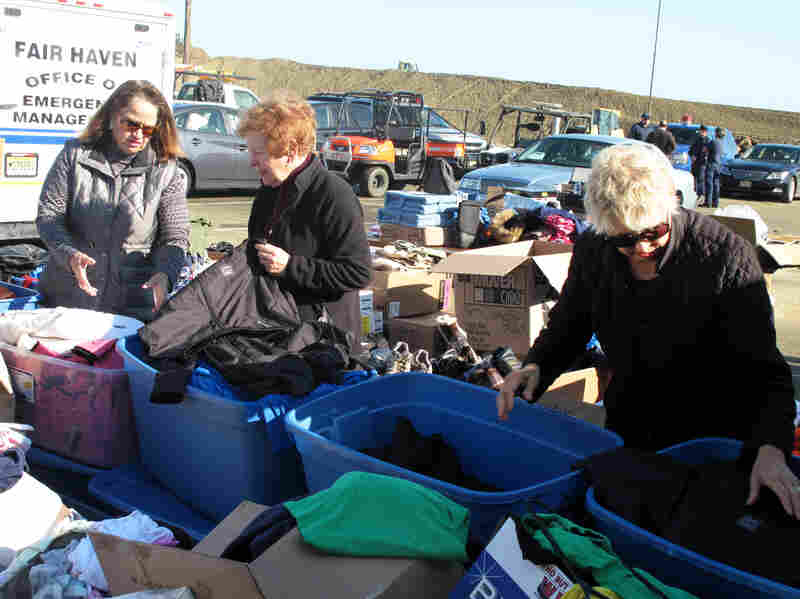 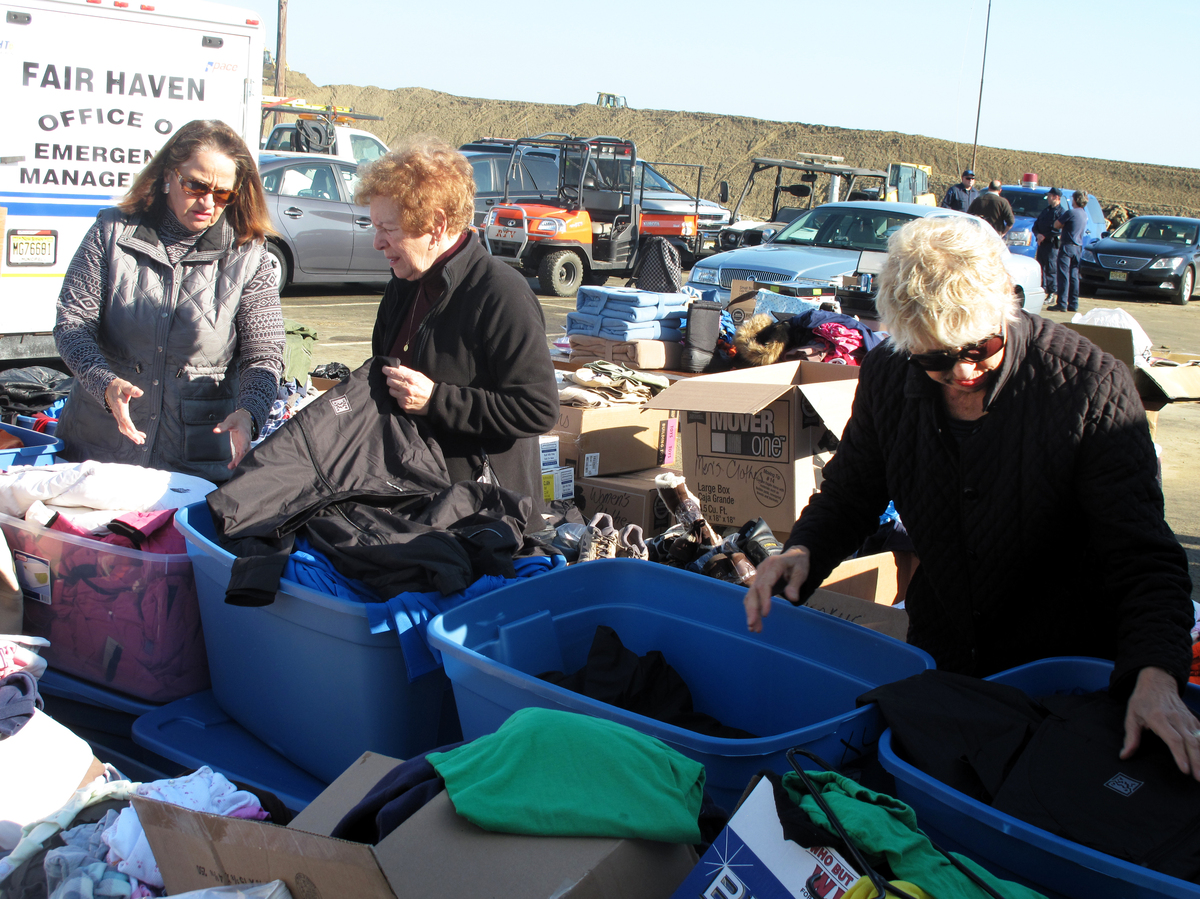 At an emergency relief site in the devastated town of Sea Bright, N.J., volunteers sort through piles of clothes, shoes and other donated items.

"This says small jacket, but where are the tops for these?" says one confused woman, holding up a pair of sweat pants found in a bin.

Similar scenes have been repeated up and down the New Jersey shore, and around New York City and Long Island. Ever since the storm hit, truckloads of donations have come from across the country, carrying food, hats, gloves, shoes and other supplies.

In Sea Bright, residents seem to want cleaning products more than anything else.

Bobby Dent says the bleach and masks he's just picked up will help. He's collecting supplies to deal with the mess that Sandy left in his house, which he purchased just two months before the storm hit.

"I'm going to try to get down in the crawl space and hit some of the mold," he says. "Hey, you do what you gotta do and move on, you know."

For the relief managers here, the challenge is trying to figure out how to get the right supplies to the right places.

In Sea Bright, they clearly have more than they need, and trucks with more donations are on the way from New Hampshire and Vermont. Those running this emergency site discuss how to transport some of the supplies to towns north of here, where they think the need is greater, so donations don't go to waste.

For charities, receiving an abundance of donated supplies in the aftermath of a natural disaster can be a logistical nightmare. Many charities prefer cash donations. So where should you send your money?

Charity Navigator, a nonprofit that evaluates U.S. charities, advises choosing a charity that's well-established, so you can be confident that it will be able to use your money effectively to handle the disaster.

When you make that donation, Charity Navigator recommends, make sure it gets where you want it to go. Avoid telemarketers and email solicitations, and instead send money directly through the mail or online. And if you give online, make sure you are on the charity's official website, not a scam site.

Finally, research your preferred charity so you know how your investment will be spent. There are dozens of charities helping with Sandy relief, but they are each doing so in different ways. Choose a charity whose specific contribution you support, whether it be medical assistance, shelter or fundraising for other nonprofits. You can also designate your investment so that your donation will be used for an express purpose.

Relief workers say they know that people mean well, but sometimes it can be overwhelming to get so much unsolicited help. And there's often waste — like warm blankets donated for disasters in tropical areas, or bottles of water sent to places where water is already plentiful.

"One of the lessons that we learned in Katrina, and all the relief organizations learned, is there are many people of goodwill who want to donate food and coats and other things to people impacted by the storm," says Ross Fraser, with Feeding America, a network of U.S. food banks.

But as in Hurricane Katrina, he says, donated products can often be more of a headache for relief workers than a help. "They have to make sure all the food that's donated is safe [and] the packages haven't been compromised. It has to be cleaned and sorted," Fraser says.

Besides, he says, relief agencies can get more bang for the buck than the average consumer, by buying in bulk and working out special arrangements with suppliers.

Carlos Rodriguez runs the Food Bank of Monmouth and Ocean Counties in New Jersey, and is helping with the relief effort. He notes, for example, that recently he was able to bring in 61,000 pounds of fresh fish, "and all we had to pay was maybe 61 cents a pound to bring it in, in freight costs."

As a result, most relief agencies say the best thing to give is money. That way they'll have the flexibility to buy the supplies that are needed the most.

But sometimes, giving cash can seem too cold in the emotional aftermath of a disaster.

Ashley Minton has arrived at the Sea Bright relief site with bags full of home-baked goods, including pumpkin, cranberry and banana muffins, and chocolate chip cookies. She says she wants to thank the National Guardsmen who helped her when she discovered that her home and everything inside had been destroyed.

"I was hysterical," she says. "And they were there, saying, 'What more can we do? What more can we move?' And we said, 'What can we do for you for helping?' And they said, 'Nothing at all. We're happy to do this.' "

But, she says, she couldn't do nothing. So she baked.