Accessibility links
Enjoy Thanksgiving Sprouts Without The Stink Atlanta-based food chemist and cookbook author Shirley Corriher explains why Brussels sprouts get so stinky, and how to prevent it from happening. She also shares the recipe for one of her family's Thanksgiving traditions — scalloped oysters. 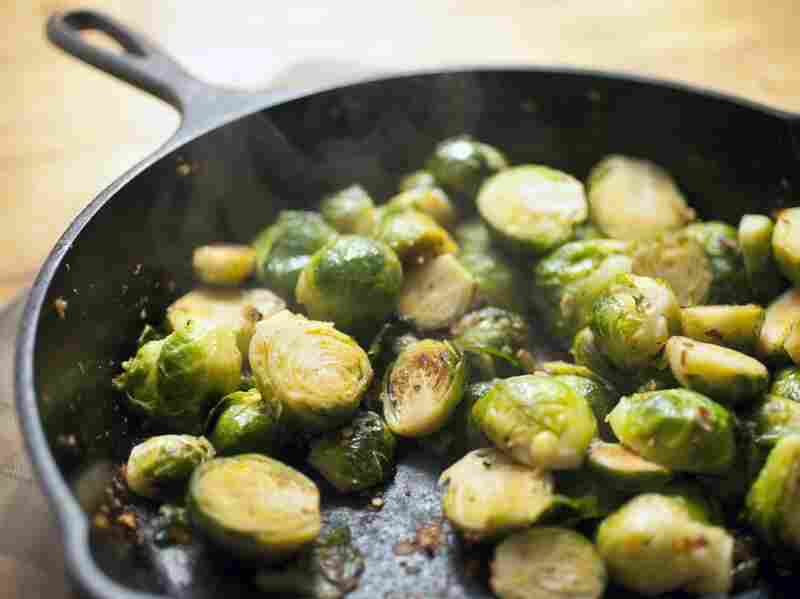 Brussels sprouts — long relegated to the bottom of the culinary barrel alongside lima beans, liver and the occasional fruitcake — have enjoyed a renaissance in recent years.

But there's an enduring reason so many have wrinkled their noses at this Thanksgiving meal staple: They smell. Like broccoli, cauliflower and other cruciferous vegetables, Brussels sprouts are rich in hydrogen sulfide gas. When cooked, those stinky gases escape, offering a less-than-warm welcome to Thanksgiving meal guests.

But it doesn't have to be that way, food chemist and cookbook author Shirley Corriher tells All Things Considered host Melissa Block. The amount of hydrogen sulfide gas released from sprouts, broccoli and cabbage doubles between five and seven minutes of cooking time, Corriher says. "So the real secret to cooking these is to cook them less than five minutes."

You can further reduce any unpleasant Thanksgiving Day odors, Corriher says, by precooking your sprouts a day ahead. Boil them for just under five minutes, she says, and then rinse them in cold water to stop the cooking.

"I love to reheat them with butter in a big skillet and some bread crumbs," she says. "Then throw in your sprouts, and toss them around to reheat them, and then serve."

Another must-have dish on Corriher's Thanksgiving table is her grandmother's oyster stew. "Oysters were such a rare treat," she says. "She only had them at Thanksgiving and Christmas, for the big feast."

When her "Nanny" passed away, Corriher says, "my aunt and uncle always got me to make [it]." Now it's her job to maintain that delicious tradition.

This is the way that I have made the oyster dish that my grandmother prepared for Thanksgiving and Christmas. I don't know that it is the way she made it, but my aunt and uncle love it when I make it, and always wanted me to make the oysters after Nanny was gone.

Preheat the oven to 350 [degrees] with the rack in the center.

Melt 4 tablespoons of butter in a medium saucepan. Stir in the flour, salt and pepper. Stir steadily on low heat for several minutes.

Remove from the heat and stir in the milk, a little at a time, to keep it smooth.

Return the pan to the stove, turn to medium heat and continue stirring. Slowly stir in the cream. Continue heating and stirring until you have a thin cream sauce.

Place the casserole on the arranged shelf and bake until bubbly around the edges, about 30 to 40 minutes. Serve hot.

Since Marcella Hazan introduced balsamic vinegar to Americans, many people put it on strawberries. My friend Terry Ford, owner of the Enterprise newspaper in Ripley, Tenn., adds brown sugar, which finishes off the sweetness and gives an even deeper red color to the berries. Some recipes call for fresh-cracked black pepper. I like to add a little salt. I have a tall, moderately narrow clear glass vase that I serve these berries in. They are so eye-catching that you need to serve them in clear glass. These are ideal at parties or as a light dessert.

About 1 to 2 hours before serving time, toss the strawberries with the brown sugar, salt and balsamic vinegar in a large mixing bowl. Refrigerate for about 30 minutes, then toss again. Refrigerate and toss again. Drain and serve cold in a clear glass container. You can save the liquid and reuse.