Accessibility links
Mick Jagger On The Apocalyptic 'Gimme Shelter' In honor of The Rolling Stones' 50th anniversary, All Things Considered has been talking to the members of the band about standout songs from their catalog. The 1969 track "Gimme Shelter" is about a "world closing in on you" — and it still speaks to us today. 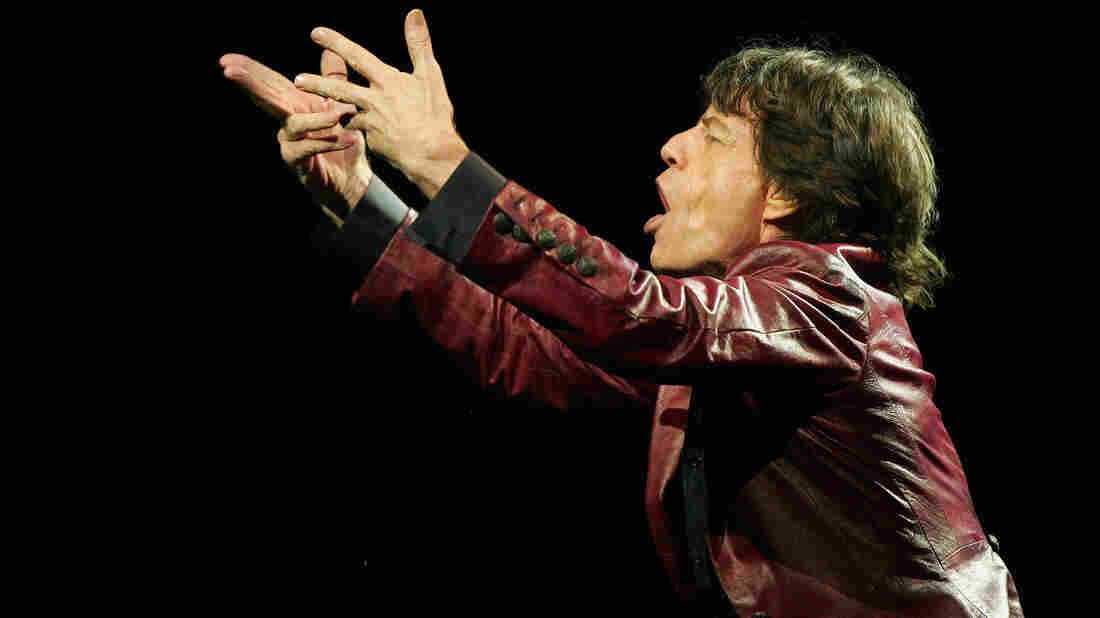 Mick Jagger says "Gimme Shelter" is about a "world closing in on you." Carl de Souza/AFP/Getty Images hide caption

In honor of The Rolling Stones' 50th anniversary, All Things Considered has been talking to the members of the band about standout songs from their catalog. Earlier this week, Keith Richards discussed what gives "Street Fighting Man" (1968) its distinctive guitar sound, Charlie Watts gave context to his drum part in "(I Can't Get No) Satisfaction" (1965), and guitarist Ron Wood skipped ahead in the band's history, settling on the funky, disco-inflected "Dance (Pt. 1)," from 1980.

For his pick, Mick Jagger went with 1969's "Gimme Shelter." NPR's Melissa Block suggests that the two talk over the song, to which Jagger jokingly responds, "Talk over it? Sacrilegious. I could rap over it."

In the original version that begins Let It Bleed, the Latin groove sets the pace and, as Jagger says, a "rock thing starts" with Keith Richards layering guitars throughout. Jagger coos in a high falsetto before he pronounces, "Oh, a storm is threatening." Then a soul singer comes in with that memorable refrain.

"When we got to Los Angeles and we were mixing it, we thought, 'Well, it'd be great to have a woman come and do the rape/murder verse,' or chorus, or whatever you want to call it," Jagger says. "We randomly phoned up this poor lady [Merry Clayton] in the middle of the night, and she arrived in her curlers and proceeded to do that in one or two takes, which is pretty amazing. She came in and knocked off this rather odd lyric. It's not the sort of lyric you give everyone — 'Rape, murder / It's just a shot away' — but she really got into it, as you can hear on the record. She joins the chorus. It's been a great live song ever since."

"Gimme Shelter" is downright apocalyptic, and a product of its time that still speaks to us today — especially in light of recent events like Hurricane Sandy.

"It was a very moody piece about the world closing in on you a bit," Jagger says. "When it was recorded, early '69 or something, it was a time of war and tension, so that's reflected in this tune. It's still wheeled out when big storms happen, as they did the other week. It's been used a lot to evoke natural disaster."

The Rolling Stones will soon embark on a short five-date tour in London, New York and New Jersey. For someone like Mick Jagger, who jokes about not knowing his age — he's 69 — performing is a very physical act.

"What do I do to get ready? Well, I do what I've always done for the last forever years," Jagger says. "I have to get up the fitness level, sing a lot, practice, get in the mood, and generally do lots of rehearsal. Get your body and mind ready.

"You get in the idea that you're going to be out there onstage and crank up the ego a bit. I'm really making this up a little bit, but if you're totally prepared mentally and physically, then the rest of it will follow. You won't be worried about it. You won't be nervous."

One more thing: Wardrobe is key.

"It makes you feel good," Jagger says. "You've got to have fresh wardrobe. You can't just go out there looking like you did last time. That helps your transformation. You know, being in a rock band, you can't overdo the costume changes too much because everyone thinks, 'Oh, that's not a real rock band. Look how many times he changes costumes! That's not rock. Rock's about going on in a T-shirt and staying in it and getting it all dirty.' But that's not really my approach."