Accessibility links
Seaside After Sandy: Is Rebuilding Worth It? Residents of Seaside Heights, N.J., are coming home to survey the damage from Hurricane Sandy and make decisions about what to do next. The decision to rebuild isn't always straightforward. For many, it's as much emotional as it is financial. 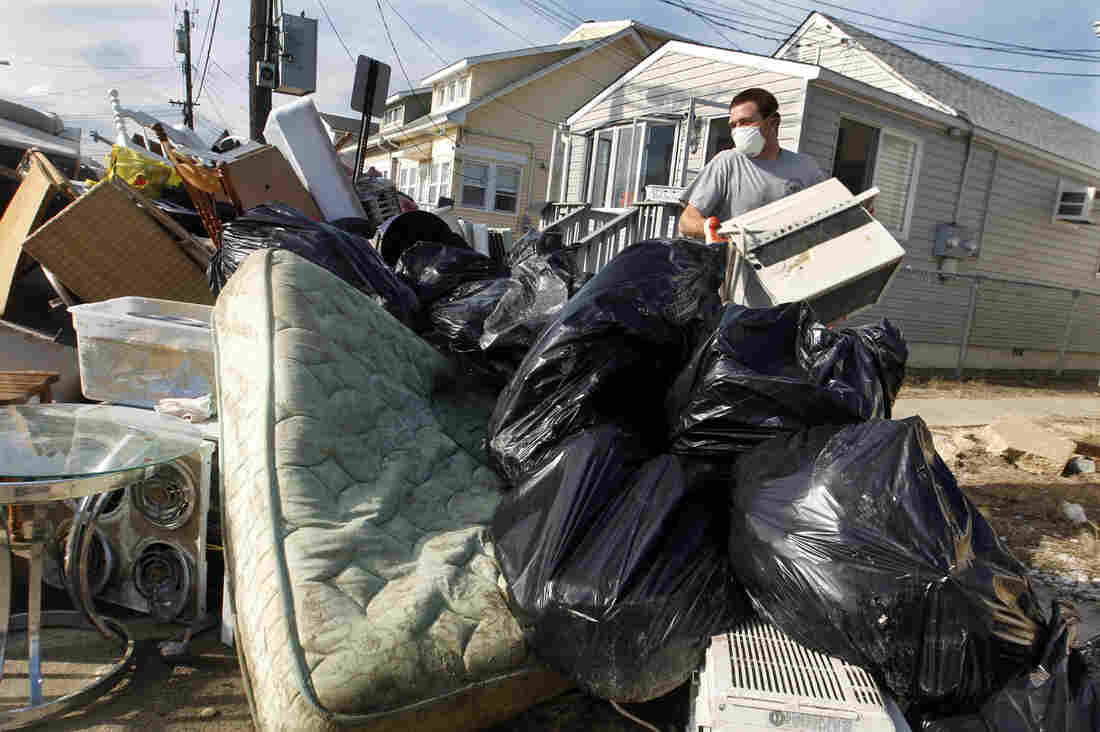 Ernest Shallo, of Carteret, N.J., throws a ruined air conditioner onto a pile of debris in front of a small home in Seaside Heights, N.J. Residents were allowed back in their homes for a few hours Monday, two weeks after the region was pounded by Superstorm Sandy. Mel Evans/AP hide caption

Ever since Hurricane Sandy ripped through the New Jersey coast, some of the hardest-hit towns have been closed altogether. Authorities say gas leaks and unstable buildings have made them too risky to visit.

This week, residents were allowed to enter Seaside Heights for a few hours each day to get a firsthand look at the damage. Many are struggling with whether to rebuild their homes. 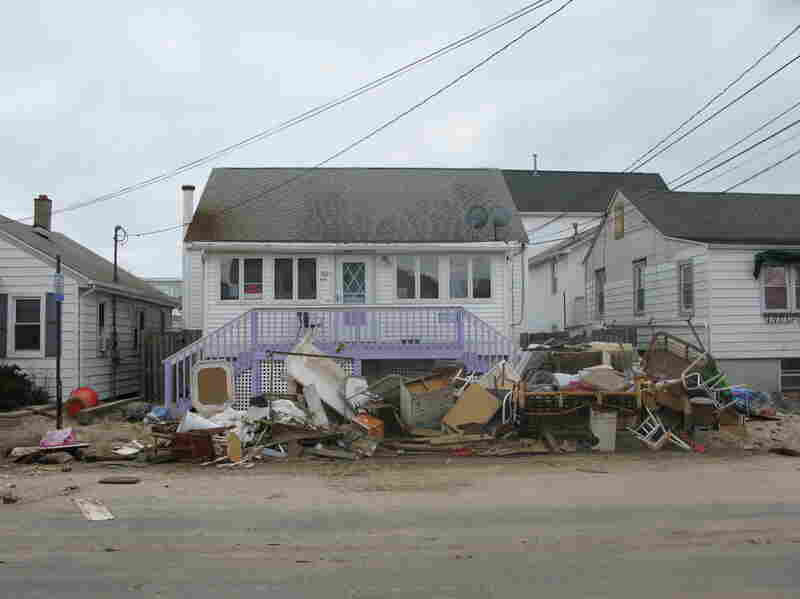 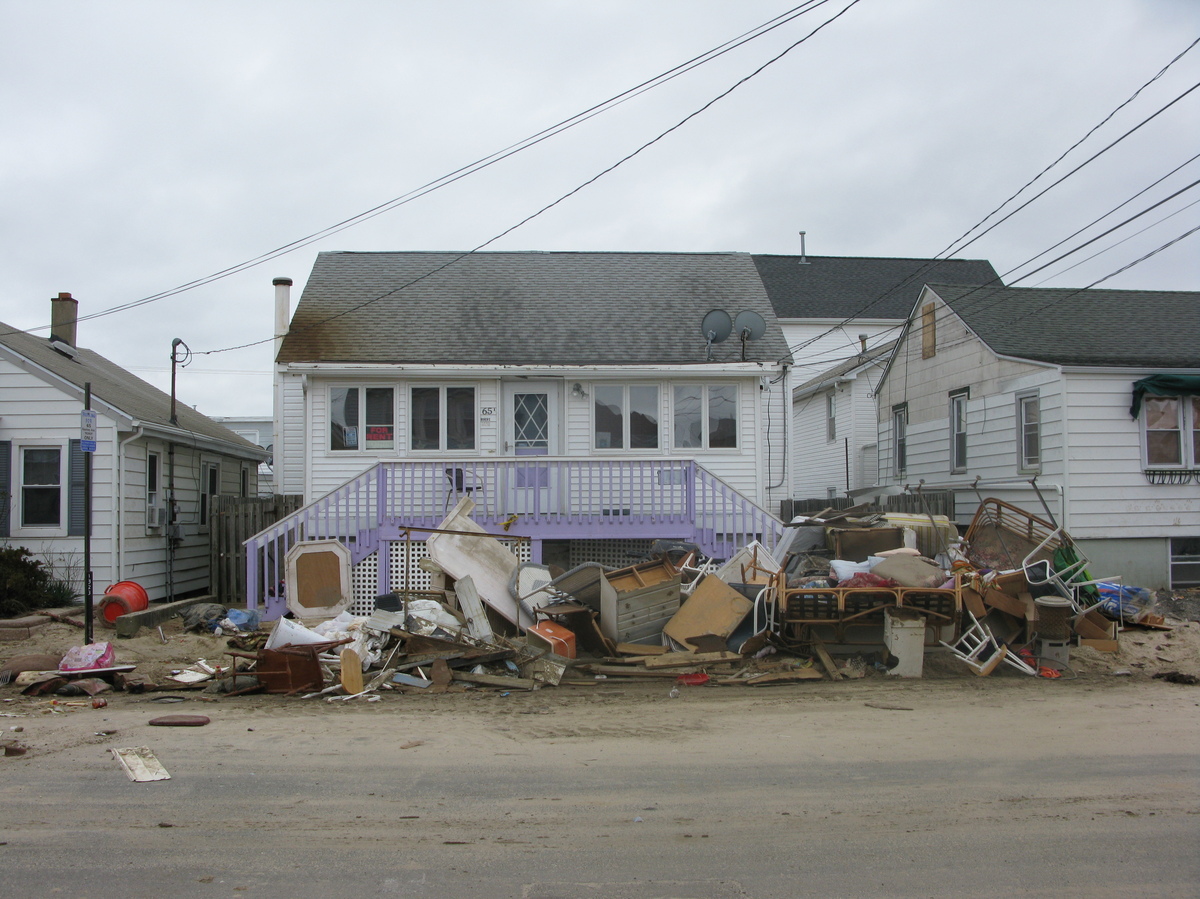 When Connie and Robert Giallella came back to Seaside Heights a few days ago to the house the family has owned since 1948, they had no idea what to expect.

This week, the Giallellas brought their contractor with them. He said there was mold in the insulation, so they had to begin ripping out walls to remove it. But the house is structurally sound.

It's salvageable, but Connie Giallella says they're not sure they'll bother fixing it.

"It's a matter of how much money you want to pay. The question is: Is it cheaper to knock the house down? We don't know," Robert Giallella says. 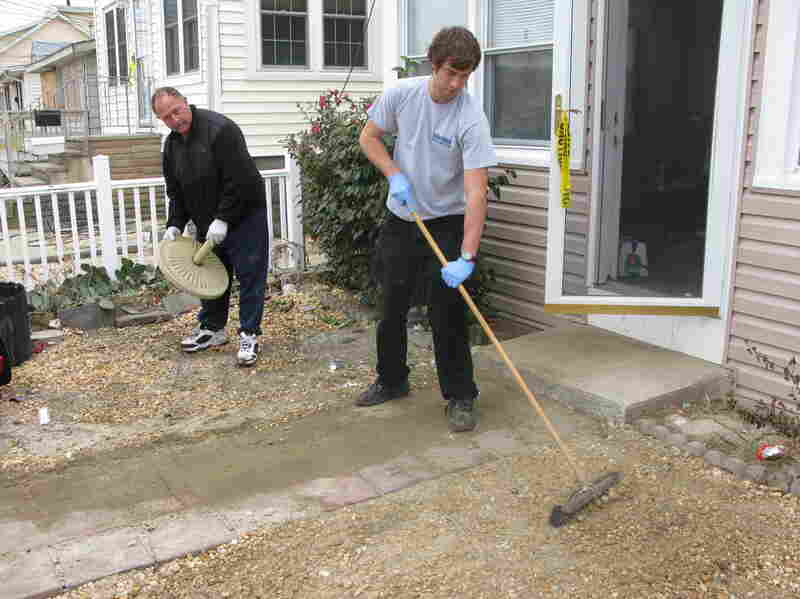 Wayne Duszczak (left) and his son Anthony clean up the gravel yard of their Seaside Heights home, which was badly damaged during Superstorm Sandy. Jim Zarroli /NPR hide caption 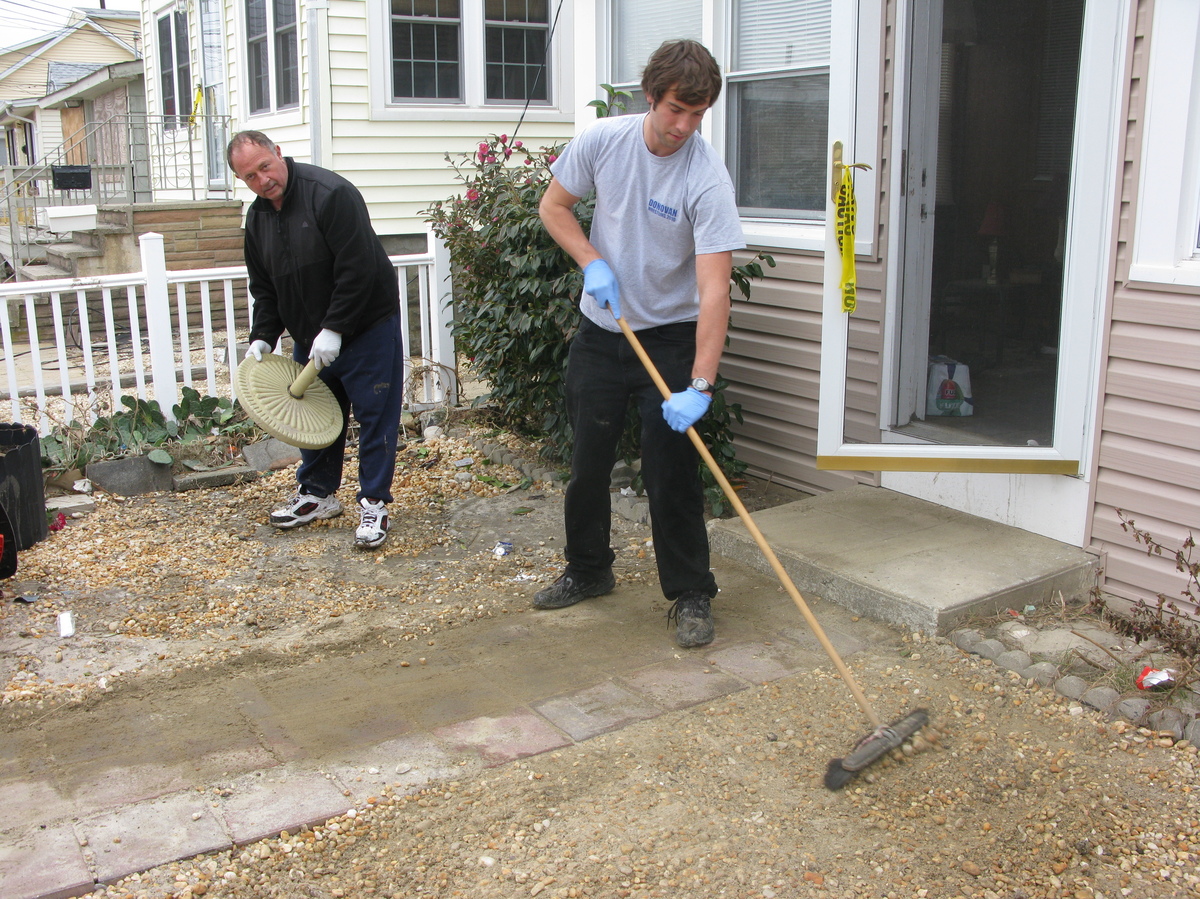 Wayne Duszczak (left) and his son Anthony clean up the gravel yard of their Seaside Heights home, which was badly damaged during Superstorm Sandy.

The house is only 700 square feet, but repairs will cost between $40,000 and $50,000. The Giallellas have no flood insurance because Seaside Heights never flooded. And even if they did, it wouldn't cover internal damage. But this is their second home — they live full time outside Philadelphia. So like a lot of people here, they have to weigh how much they're willing to spend to rebuild. For many, the decision is as much emotional as it is financial.

Wayne Duszczak and his son Anthony are full-time residents of Seaside Heights. They live in a small house close to what was once the boardwalk. A widower, Wayne Duszczak had spent $30,000 renovating his place recently.

"Well, I have a girlfriend now, and she looked at my house, and it was a man cave. She went, 'Oh, my God,' and she got me going on it. I started throwing out stuff because I guess I am a bit of a hoarder," he says.

Duszczak doesn't want to think about how much he's lost; it would make him sick. For now he's living with friends. He hasn't decided whether to try to sell the house.

In Sandy's Wake, A Reshaped Coastline

"Walking away, I don't know. My son has lived here his whole life. He's got some kind of sentimentality about it. I could leave, but, you know, you gotta at least pick up everything and put it back in order," Duszczak says.

Duszczak and other longtime residents say the town has changed in recent years. A lot of investors have come in and built along the shore on what used to be dune land. It has made the town more vulnerable to flooding. It has also brought in a lot of renters. The hard-partying cast of Jersey Shore rents a house around the corner.

"They charge you more on your taxes up here because you're near the ocean, but 2 o'clock in the morning somebody comes down the street yelling, 'You Can't Always Get What You Want,' because he's drunk. He wakes me up, you know?" Duszczak says.

Duszczak points out five or six houses on his block alone that are rented out, some of them year-round. The owners have taken a hit as well; the apartments are no longer inhabitable.

Jared and Jennifer Drogose lived in one of those apartments until Sandy struck. On Thursday, they came to clean out their place. They had just a few hours to work; the police make everyone leave town at 3 p.m.

"It's really hard to get this stuff out, and the time limit, and it's sickening," Jennifer Drogose says.

She says their landlord came by one day to see the apartment and cried. She says he's talking to FEMA and his insurance agent, and doesn't know when or if he can rebuild. Meanwhile, the couple are living in a motel and looking for a new apartment.

A lot of people here say Seaside Heights will be rebuilt — even the amusement pier that suffered so much damage. But it's also true that the town itself has changed in ways that residents are only beginning to reckon.