Accessibility links
Sandy Reveals Long Island Utility's 'Boondoggle' Past Nearly three weeks after Hurricane Sandy, nowhere has the wait to restore power been longer than on Long Island. Utility mismanagement has deep roots there, where consumers are still paying for abuses that started more than 50 years ago. 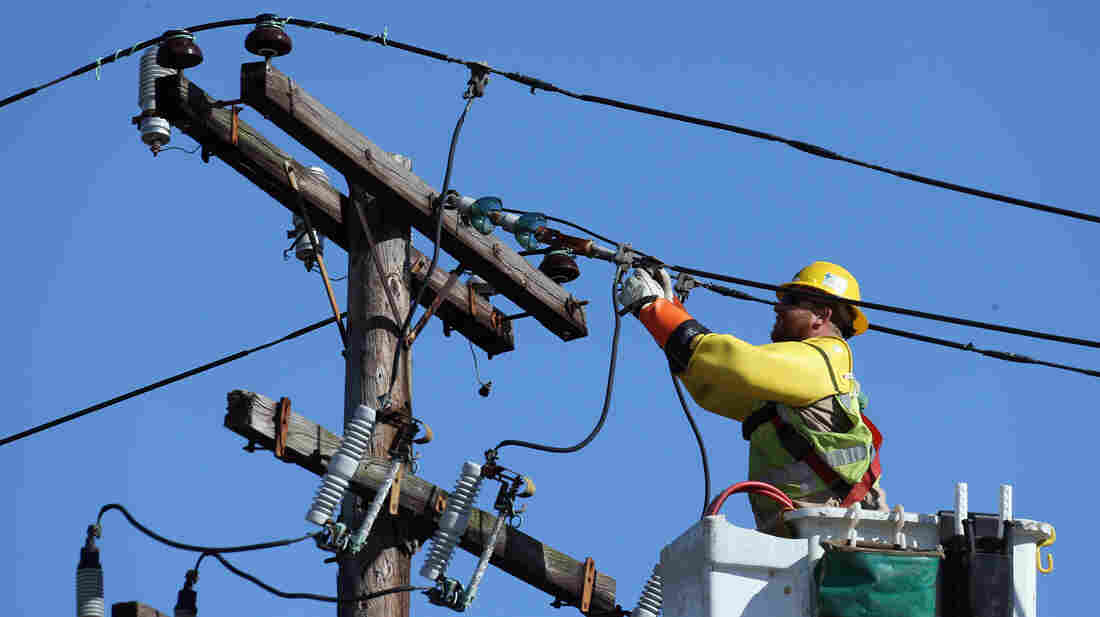 Nearly three weeks after Hurricane Sandy slammed into New York and New Jersey, the lights and heat have finally come back on across most of the region.

But nowhere was the wait for power longer than on Long Island, where about 1,000 customers are still in the cold and dark, and utility mismanagement has deep roots.

The list of the Long Island Power Authority's alleged failures is epic. New York Gov. Andrew Cuomo said that in the runup to Sandy, LIPA failed to stockpile utility poles, so after the storm it ran out. Newsday reported LIPA has no system to automatically to report outages, and Moody's warned that the power authority was in danger of running out of cash.

"It has been the product of catastrophes, and it continues to experience them," says Kenneth McCallion, a former federal prosecutor with decades of experience dealing with power companies on Long Island.

McCallion says to understand what ails LIPA, you have to go back to its roots. The Long Island Power Authority is a state agency that was formed to take over a private power company — one with a deeply troubled history — called Long Island Lighting Co., or LILCO.

"It came to our attention because we were investigating a number of unions in Long Island, and one of them was a security guards union," McCallion says. This was back in the early 1980s. "And the security guard union was looking to organize and take over the security functions at the Shoreham plant as it was being built."

Shoreham wasn't just a regular power plant; it was a nuclear plant — and a controversial one.

"So we were alarmed and became increasingly concerned as we furthered our investigation — not only from a national security standpoint," McCallion says.

Back then, guys on the Brooklyn task force called the east end of Long Island the "wild east." McCallion realized that a number of unions and contractors working at the Shoreham nuclear power construction site were the targets of other organized crime investigations. Several union leaders ended up in prison.

But for decades, the Shoreham project staggered forward.

"We noticed that the construction seemed to be going on forever — they'd build part of the plant and then literally some of it was ripped out and then reconstructed," McCallion says.

In the 1960s, when LILCO started building Shoreham, the utility said it would cost between $65 million and $75 million. The final bill was 100 times larger — more than $6 billion.

"The rumor among the trades at Shoreham was that they never really wanted the project to finish because it was just a tremendous boondoggle for everyone except the consumers of electricity on Long Island," McCallion says.

"It was just a colossal mess in terms of the construction of the plant in so many ways," says Karl Grossman, an investigative journalist who wrote a book about Shoreham. A box of nuclear engineering documents was discovered in a town dump; questions about safety and evacuation routes consumed communities near the plant; electricity rates on Long Island skyrocketed.

Engineers working there said if the plant ever came online, they would move. And in the mid-1980s, McCallion brought a civil Racketeer Influenced and Corrupt Organizations, or RICO, action against the power company on behalf of Long Island's Suffolk County.

One of McCallion's witnesses fled to Alaska and would testify only by videotape.

"He was fearful of basically testifying and being without protection," McCallion says. "Because, I mean, Long Island construction trades at the time — and the garbage haulers and the security guard unions — were rather upset that the Shoreham project may come to a halt. And they certainly had the capability to retaliate against the whistle-blowers. One of them just decided to go up to Alaska and stay there."

"We successfully prosecuted LILCO as a racketeering organization — not a traditional one, not an organized-crime family, but as having engaged in an intentional scheme to defraud," he says.

The jury's verdict could have bankrupted LILCO, but McCallion settled and then New York State bailed LILCO out.

In the late 1990s, the state agency, the Long Island Power Authority, issued $7 billion in bonds and bought the company.

"LIPA really takes over as the utility on Long Island from LILCO," McCallion says, "but is saddled with this multibillion-dollar Shoreham debt."

Financially, Grossman says, it was a bad deal for consumers, but Long Islanders backed it anyway because the LIPA takeover meant the Shoreham nuclear plant would never open.

"The sentiment at the time was very clear — better our money than our lives," Grossman says.

Today the Long Island Power Authority is still deeply indebted. Long Island consumers pay some of the highest electric rates in America. But most of LIPA's cash goes to debt service. And that's very likely one reason it was unprepared for Sandy and its aftermath.