Accessibility links
Put A Little Soul In That Thanksgiving Stuffing Thanksgiving has its must-haves: potatoes, cranberries, turkey. But cooking the feast with a soul-food style gives the meal a whole new flavor. Three chefs give their take on the tradition and serve up some recipes, too. 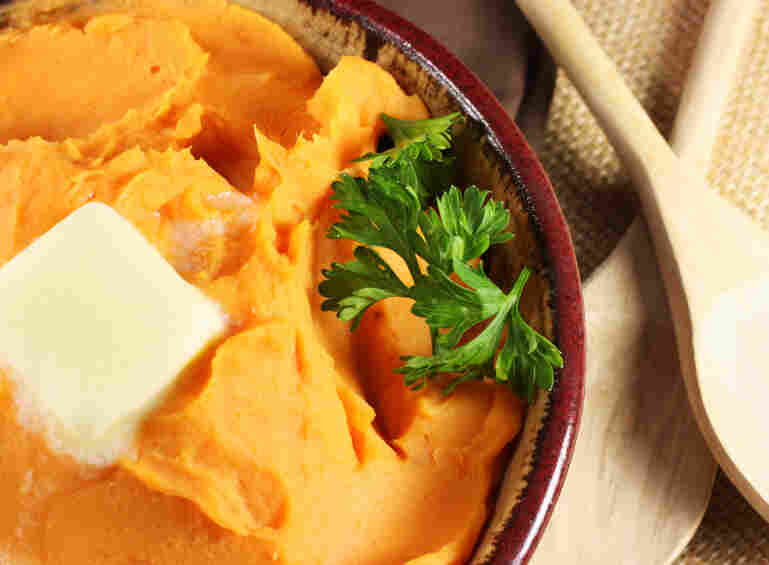 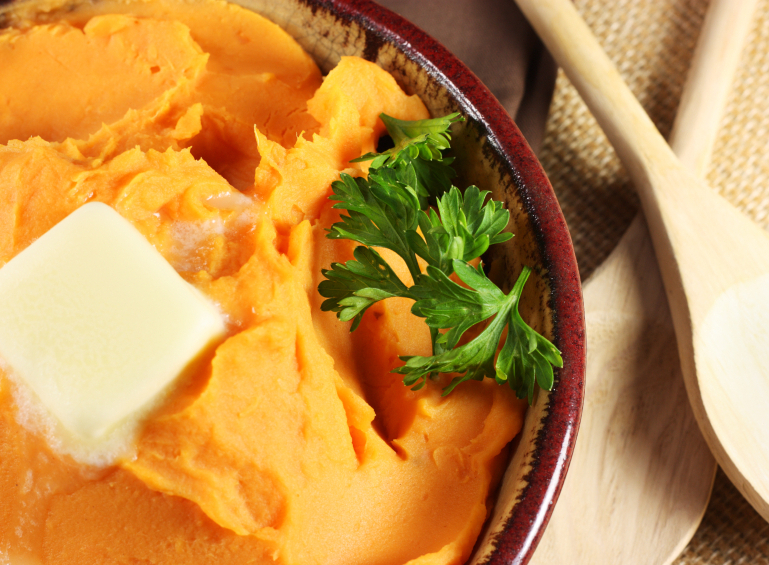 Thanksgiving has its must-haves: potatoes, cranberries, turkey. But cooking the feast with a soul-food style gives the meal a whole new flavor.

Soul food conjures up thoughts of rich dishes full of butter or gravy — comfort foods. But soul food comes out of one of America's darkest chapters. Chef Melba Wilson, owner of Melba's Restaurant and Melba's 125 in Harlem, N.Y., explains that the basis of the cooking comes from the food slave owners gave to slaves.

Tanya Holland, executive chef and owner of Brown Sugar Kitchen and B-Side BBQ in Oakland, Calif., is known for her inventive twists on modern soul food. In her restaurant, for example, they smoke and roast yams and then mash them with butter and cream.

"What I love about Thanksgiving is it's inclusive, and it really is nondenominational, open no matter what ethnicity," she says. "And for us, it's sort of been a way to connect with friends of other backgrounds and knowing that we were kind of ... celebrating being together and being all here in this one country with all our diversity."

Soul food favorites have been reinterpreted by many of the country's big name chefs. Art Smith is among them. He's won some of the culinary profession's highest awards and is executive chef and co-owner of Washington, D.C.'s Art and Soul restaurant. Smith's cooking style comes from out of his own family traditions in northern Florida.

"God and fried chicken go hand-in-hand down there ... and food is a very important part of that whole social element," he says.

Growing up, Thanksgiving for him was more about the hunting beforehand than it was about the cooking. Smith would go out with his grandfather and hunt for quail or squirrel. They'd eat whatever game they got along with a turkey from the farm.

"Much of the food culture that is now very much part of my family, my great-grandmother created that," he says. That includes one of his favorite side dishes, her cornbread "dressing."

3/4 pound dried Calimyrna figs, stemmed and cut into eighths (about 2 cups when prepped)

Prepare cornbread, and when cooled, crumble and set aside in a large bowl. Remove sausage from casing, if necessary, and crumble. Cook sausage in a skillet over medium heat until cooked through; set aside. Place Madeira and prepped figs in a small saucepan over medium heat in order to re-hydrate figs. All of the liquid should be evaporated; this takes about 10 minutes.

Toast pecans in a small skillet over low heat for about 5 minutes. In a large skillet, melt butter and add onions and celery. Cook over low to medium heat until vegetables are soft and translucent, about 10 minutes. Add herbs, salt and pepper and cook an additional 5 minutes. Add sausage, figs and onion mixture to the crumbled cornbread and loosely mix, using a wooden spoon or large kitchen spoon. Gently press stuffing mixture into 2-quart glass or ceramic baking dish (12"X8 1/4"X2 1/2"); the top should be textured and rustic, not smooth. Bake stuffing for 1 hour at 350 degrees.

4 semi-sweet apples such as Fuji or Braeburn, peeled and diced

1/2 cup of apple brandy or brandy

A pinch of salt

Zest oranges and reserve zest and then peel and remove segments. Combine all ingredients in a food processor and pulse until mixture resembles a salsa. Transfer to a bowl, cover, and let sit overnight in refrigerator before serving. 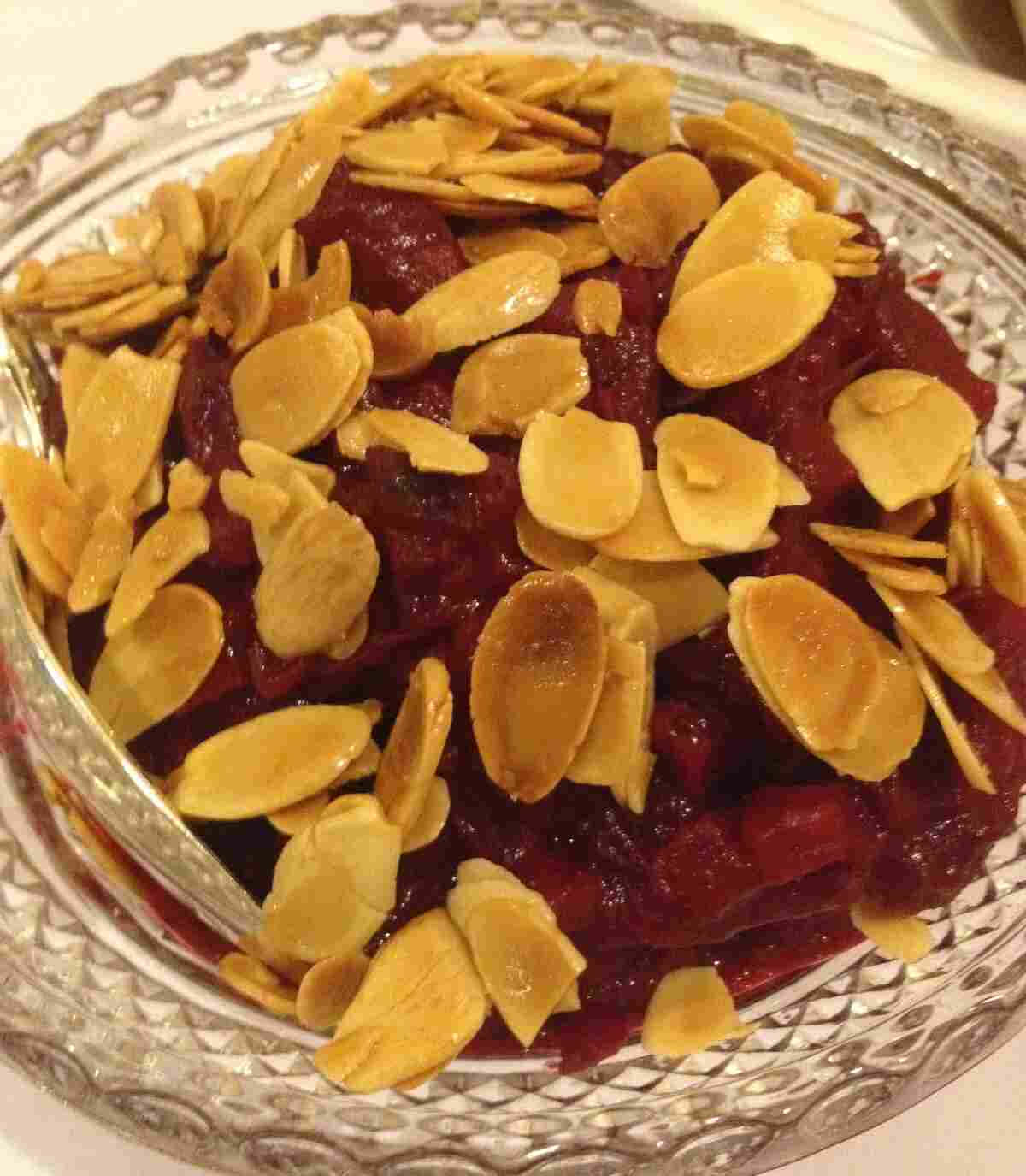 Recipe adapted from Art Smith's Back to the Table. Smith is executive chef and co-owner of Art and Soul restaurant in Washington, D.C.

Grate the zest from the orange and squeeze the juice.

Bring the cranberries, pears, orange juice and zest, ginger, sugar and cinnamon to a boil over medium-high heat, stirring often. Reduce the heat to medium-low. Simmer, uncovered, until almost all of the cranberries have popped and the juices are syrupy, about 20 minutes. Transfer to a container and cool completely. Cover tightly and refrigerate overnight to marry the flavors. Remove the cinnamon stick. (The chutney can be prepared up to 1 week ahead.)

Just before serving, stir in half of the almonds, and garnish with the rest. Serve chilled or at room temperature.

*To toast nuts, spread the nuts in a single layer on a baking sheet. Bake in a preheated 350-degree oven, stirring occasionally, until fragrant and lightly toasted, about 10 minutes. Cool completely before using.