Accessibility links
Controversial Casting For A Nina Simone Biopic The producer of an upcoming Nina Simone biopic has cast Afro-Latina actress Zoe Saldana in the lead role — a move that's proved controversial. Critics say that while Saldana is a talented actress, she's too close to traditional light-skinned Hollywood beauty standards. 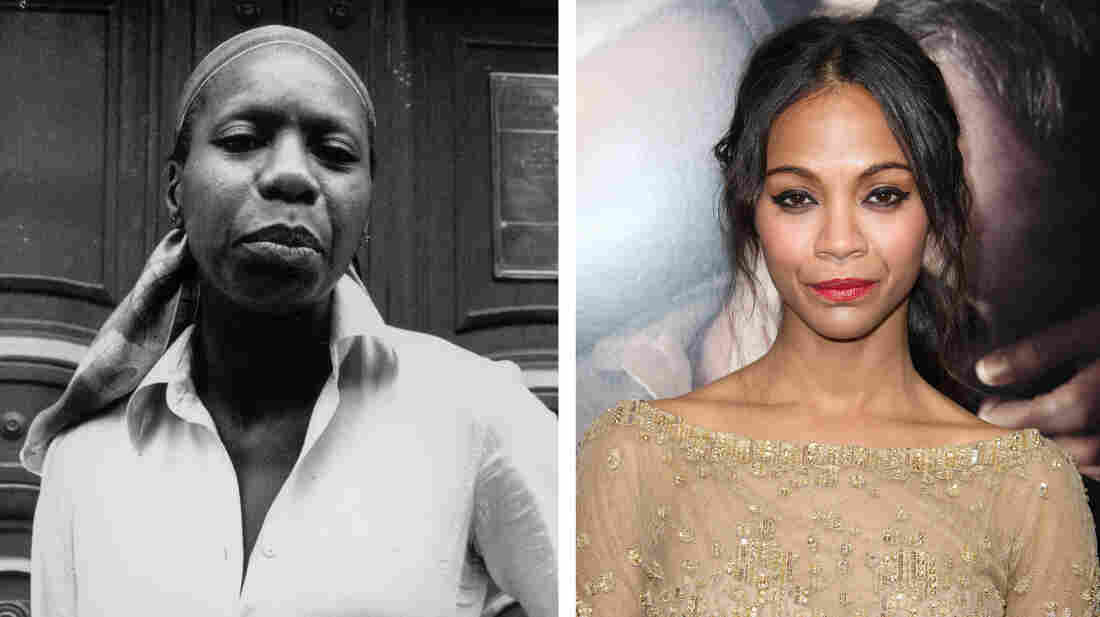 Nina Simone (left) and actress Zoe Saldana are seen in this composite image. Saldana has been cast to play the late singer in a film biopic. John Minihan/Frederick M. Brown/Getty Images hide caption

The rumors that had been around for a couple of years have finally been confirmed: At long last, there's a film in the works about the turbulent life of Nina Simone, otherwise known as the "High Priestess of Soul."

Simone was famous from the 1950s through the '70s for her music and her civil rights activism. And although she died in 2003, her voice remains popular on TV, movie soundtracks and commercials.

Originally, hip-hop diva Mary J. Blige was slated to star in the film, called Nina, but she dropped out last year after shooting was delayed. To take her place, director Cynthia Mort chose willowy Zoe Saldana, a gorgeous Afro-Latina who co-starred in Avatar. And that's when the outcry began.

'Princess' Nina Simone: The Voice Of A Movement

Erica Renee is one of several angry posters on YouTube who believes the choice of Saldana is jarringly incorrect. "It's like super-disrespectful to cast an ethnically ambiguous person to portray a woman who battled the industry's distaste for her dark skin, and her natural hair and her thick features," she says in one of her videos. Renee says Saldana's keen features and cafe au lait complexion are very close to Hollywood's typical beauty standard.

Lanita Jacobs teaches anthropology at the University of Southern California, and often lectures on how African-Americans are portrayed in film and on television. Jacobs says casting the fair-skinned Saldana, then darkening her with makeup and giving her a prosthetic nose and an Afro wig, is particularly offensive to women who have had to struggle with acceptance because of their own dark complexions.

"We understand that there are these beauty issues," Jacobs says, "and sometimes what sanctions people's right to speak on these kind of issues is whether they have had experiences born of what it means to have kinky hair, or to have wide noses or darker skin. Nina's music taps into a certain kind of awareness born of the way she looks."

Simone herself — born Eunice Kathleen Waymon in Tryon, N.C. — often said in interviews that Hollywood penalizes dark-skinned female artists for their hue. Her daughter, actress Simone Kelly, told The New York Times that the singer often said she'd like Whoopi Goldberg to portray her if a movie was ever made.

The social website Change.org has circulated a petition asking director Cynthia Mort — who did not respond to our interview requests — to rethink the casting of Saldana in the title role. Petitioners said this isn't a diss of Saldana and her considerable talent, but a request for someone who more closely mirrors Simone's actual looks.

Some of the movie's black critics have already said they won't go to see it when it's finished, both because of the casting decision and because the Simone family was not consulted. But many swore they'd boycott another movie they believed did a disservice to how black women are perceived — and then turned out to see The Help in droves.