Accessibility links
Blasphemy Charges On The Rise In Pakistan A single accuser's word is often enough to lead to an arrest and spark mob violence. Human rights advocates say the charges are frequently made against religious minorities, and are often used to settle personal scores. 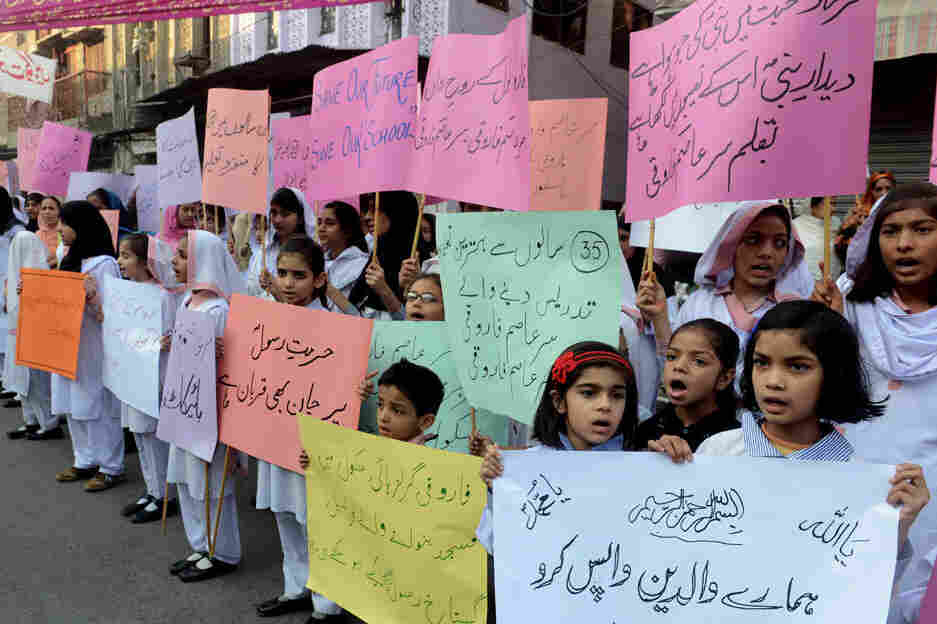 Students demand the reopening of the Farooqi Girls High School in Lahore, Pakistan, in early November. A mob attacked the school in October, accusing a teacher of insulting the Prophet Muhammad. It takes just one accusation to lead to an arrest under Pakistan's stringent blasphemy laws. Arif Ali/AFP/Getty Images hide caption 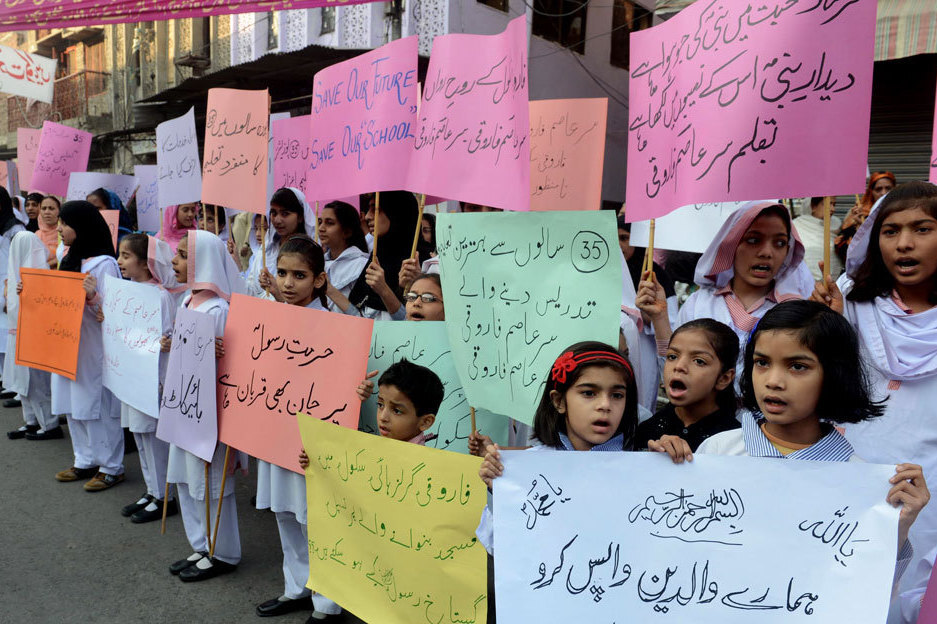 Students demand the reopening of the Farooqi Girls High School in Lahore, Pakistan, in early November. A mob attacked the school in October, accusing a teacher of insulting the Prophet Muhammad. It takes just one accusation to lead to an arrest under Pakistan's stringent blasphemy laws.

Pakistan has had 27 blasphemy cases filed so far this year, a figure that alarms human rights groups, who say the law is frequently used to persecute religious minorities.

In a case that has drawn international attention, a judge on Tuesday dismissed blasphemy charges against a Christian girl, Rimsha Masih, ending a three-month order for her and her family.

There are many other, less publicized cases that also have had a broad impact on entire communities.

On a recent autumn morning in Lahore, hundreds of uniformed schoolgirls, many wearing veils, file into the Farooqi Girls High school. The four-story school sits just off a narrow, congested street in an older section of this vibrant city in eastern Pakistan.

Getting back to class is a welcome return to normalcy for Farooqi's students and teachers. The school was attacked last month after a teacher was accused of writing insulting comments about the Prophet Muhammad in a student's notebook — something the teachers vehemently dispute.

The accuser was a vice principal from a nearby religious school, or madrassa. On the night of Oct. 30, an angry and violent mob formed outside the Farooqi school. Still inside was Sheraz Shuja, the school administrator, along with the principal and some teachers. 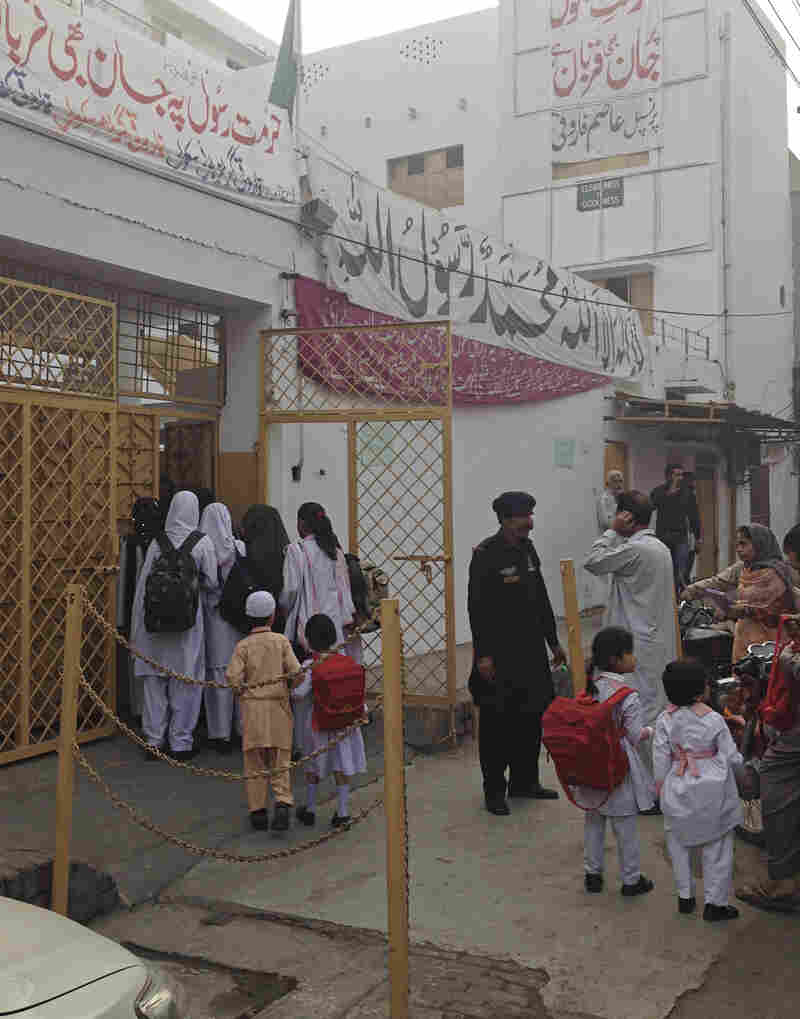 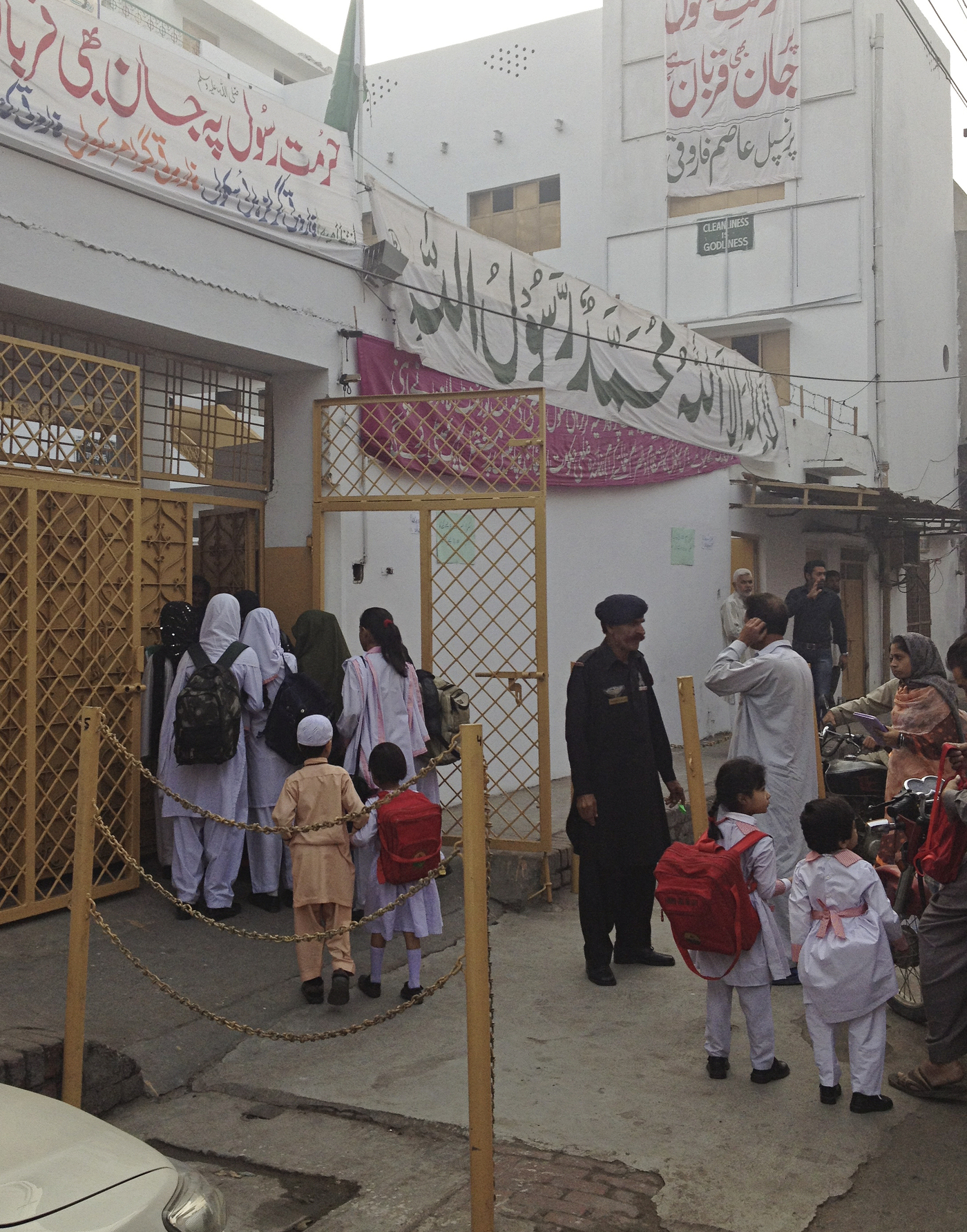 Students file into Lahore's reopened Farooqi Girls High School. The school was temporarily closed after a violent attack in October.

"We heard a loud knock at our door, and they were trying to break the door. They were pushing it hard," Shuja says. "So we went on the top floor. Then they broke into the building, hundreds of people. They looted and burned everything. We were very afraid. If they had got hold of us, they would have killed us."

The police arrested Farooqi's 77-year-old principal, and the teacher accused of blasphemy is in hiding, in fear for her life.

'We Will Not Spare You People'

This is the fourth time this year that teachers working with nonreligious curricula have been accused of blasphemy. Sumbul Naseer, who teaches science at the Farooqi school, says she's worried.

"So many people are having threatening calls from so many numbers, [saying], 'Don't open the school, don't go inside, we will not spare you people,' and this and that," Naseer says.

Under Pakistan's stringent blasphemy laws, it takes only one accusation — backed up with little or no evidence — to lead to an arrest. The original laws date back to British colonial times, before Pakistan gained independence in 1947.

The laws were strengthened under President Zia-ul-Haq during the 1980s, when insulting the Prophet Muhammad or the Quran was made a capital offense. However, to date, no one has been executed for blasphemy.

The laws do not clearly define what "insult" means. This gives wide berth to Islamist extremists, who have been increasingly using the laws to further their religious goals, says Joseph Francis, director of the Center for Legal Aid Assistance and Settlement, which helps Christians accused of blasphemy.

"Extremists have been able to exploit the situation," Francis says. "Pakistan is under attack from militants, trying to introduce their version of Islam and creating intolerance against minorities. The blasphemy law is one of the instruments they can use."

Francis says Shiite Muslims, Hindus, Christians and other minorities are being increasingly targeted. The accused, their families and their communities often face vigilante justice, he adds.

"If one person is accused, the entire community is punished," Francis says."In one case, six people were burned alive and 147 houses burned down. Many people have to go into hiding — they cannot lead a normal life."

With A Girl Jailed, Pakistan Law Again Under Scrutiny

Francis points to Rimsha Masih, the Christian girl who was acquitted Tuesday. Earlier this year, a local mosque leader accused her of burning pages of a book used to teach children about the Quran. After she was accused, violent mobs forced an exodus of hundreds of other Christians from the slum neighborhood where Rimsha lived.

In a twist, her accuser was arrested for planting evidence against her. In a television interview, he said he wanted to drive the Christians from the area.

I.A. Rehman, secretary-general of the Human Rights Commission of Pakistan, says charges of blasphemy often have nothing to do with insulting the prophet or the Quran.

"Our finding is that blasphemy cases are initiated, in a large number of cases, to settle personal scores, to settle economic competition issues and to settle sectarian differences," Rehman says.

And that is likely to continue, he adds, because the government won't tackle Islamic extremism.

"The government is not in a position to take on the militants straight on," he says. "It is weak. And the extreme ... wave of intolerance has sympathizers and supporters across the board in Pakistan."

Pakistan's politicians may take warning from what happened to Salman Taseer, the former governor of Punjab. He was gunned down last year after suggesting that the blasphemy laws be reviewed.