Accessibility links
Big News From Mars? Rover Scientists Mum For Now Data from a soil sample on Mars have NASA scientists buzzing with excitement over a finding that could be "one for the history books." But they're not spilling the beans about their discovery yet. 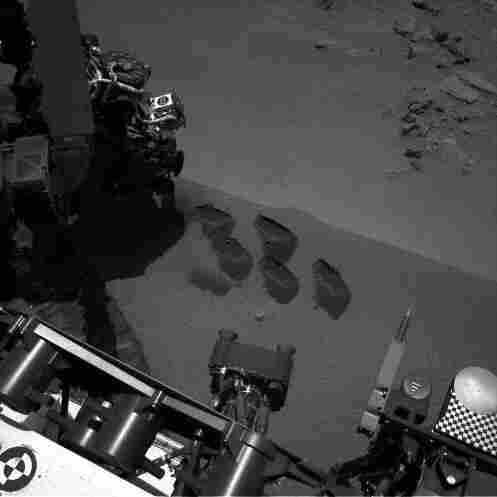 NASA's Mars rover Curiosity dug up five scoops of sand from a patch nicknamed "Rocknest." A suite of instruments called SAM analyzed Martian soil samples, but the findings have not yet been released. NASA/JPL-Caltech hide caption

Scientists working on NASA's six-wheeled rover on Mars have a problem. But it's a good problem.

They have some exciting new results from one of the rover's instruments. On the one hand, they'd like to tell everybody what they found, but on the other, they have to wait because they want to make sure their results are not just some fluke or error in their instrument.

It's a bind scientists frequently find themselves in, because by their nature, scientists like to share their results. At the same time, they're cautious because no one likes to make a big announcement and then have to say "never mind."

The exciting results are coming from an instrument in the rover called SAM. "We're getting data from SAM as we sit here and speak, and the data looks really interesting," John Grotzinger, the principal investigator for the rover mission, says during my visit last week to his office at NASA's Jet Propulsion Laboratory in Pasadena, Calif. That's where data from SAM first arrive on Earth. "The science team is busily chewing away on it as it comes down," says Grotzinger.

SAM is a kind of miniature chemistry lab. Put a sample of Martian soil or rock or even air inside SAM, and it will tell you what the sample is made of.

Grotzinger says they recently put a soil sample in SAM, and the analysis shows something remarkable. "This data is gonna be one for the history books. It's looking really good," he says.

Grotzinger can see the pained look on my face as I wait, hoping he'll tell me what the heck he's found, but he's not providing any more information.

So why doesn't Grotzinger want to share his exciting news? The main reason is caution. Grotzinger and his team were almost stung once before. When SAM analyzed an air sample, it looked like there was methane in it, and at least here on Earth, some methane comes from living organisms.

But Grotzinger says they held up announcing the finding because they wanted to be sure they were measuring Martian air, and not air brought along from the rover's launchpad at Cape Canaveral.

Grotzinger says it will take several weeks before he and his team are ready to talk about their latest finding. In the meantime he'll fend off requests from pesky reporters, and probably from NASA brass as well. Like any big institution, NASA would love to trumpet a major finding, especially at a time when budget decisions are being made. Nothing succeeds like success, as the saying goes.

Richard Zare, a chemist at Stanford University, appreciates the uncomfortable position John Grotzinger is in. He's been there. In 1996, he was part of a team that reported finding organic compounds in a meteorite from Mars that landed in Antarctica. When the news came out, it caused a huge sensation because finding organic compounds in a Martian rock suggested the possibility at least that there was once life on Mars.

"You're bursting with a feeling that you want to share this information, and it's frustrating when you feel you can't talk about it, "says Zare.

It wasn't scientific caution that kept Zare from announcing his results. It was a rule many scientific journals enforce that says scientists are not allowed to talk about their research until the day it's officially published. Zare had to follow the rules if he wanted his paper to come out.

He did break down and tell his family. "I remember at the dinner table with great excitement explaining to my wife, Susan, and my daughter, Bethany, what it was we were doing," says Zare. And then he experienced something many parents can relate to when talking to their kids.

"Bethany looked at me and said, 'pass the ketchup.' So, not everybody was as excited as I was," he says.

Zare says in a way, scientists are like artists. Sharing what they do is a big part of why they get out of bed in the morning.

For now, though, we'll have to wait to see what's got Mars rover scientists itching to say what they found.