Accessibility links
Scandals Call Into Question Crime Labs' Oversight A report three years ago found serious problems in the nation's forensic science community, but since then, little has changed. In many states, lab employees report to law enforcement, potentially undermining their impartiality. And only a few states require labs to be accredited. 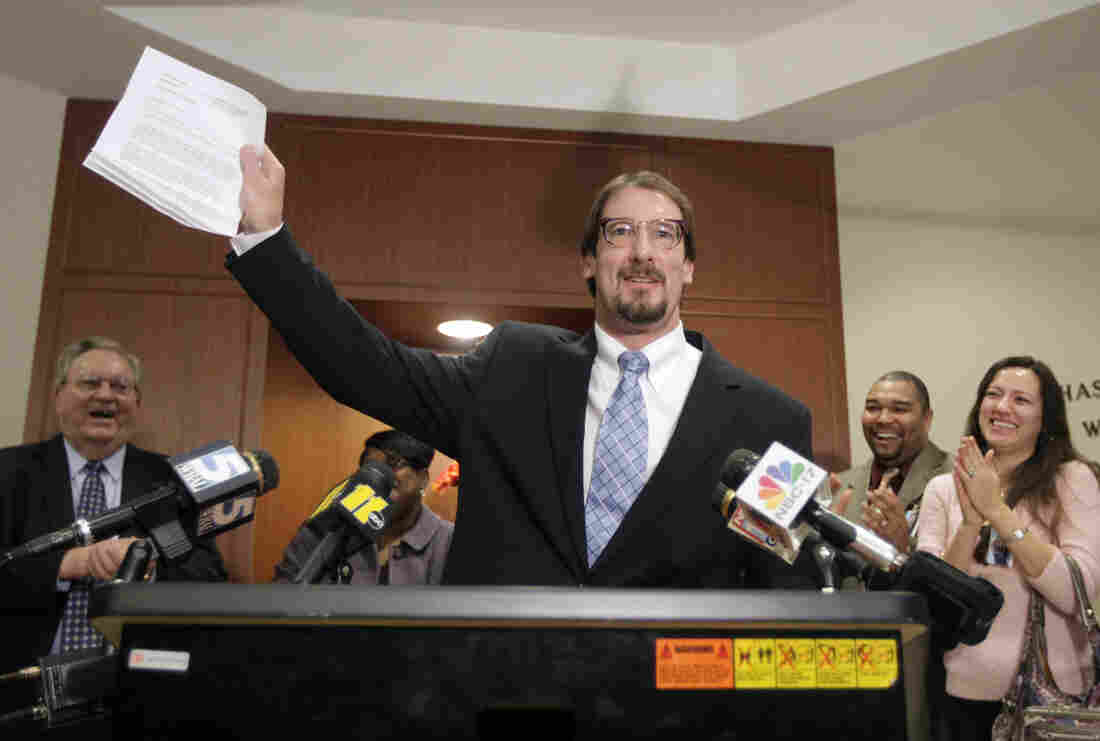 Greg Taylor holds up his release papers after he was unanimously exonerated by a three-judge panel in Raleigh, N.C., in 2010. Taylor, who had been in prison since 1993 for murder, is now suing several people who worked at a crime lab, claiming their erroneous findings landed him in jail. Shawn Rocco/AP hide caption 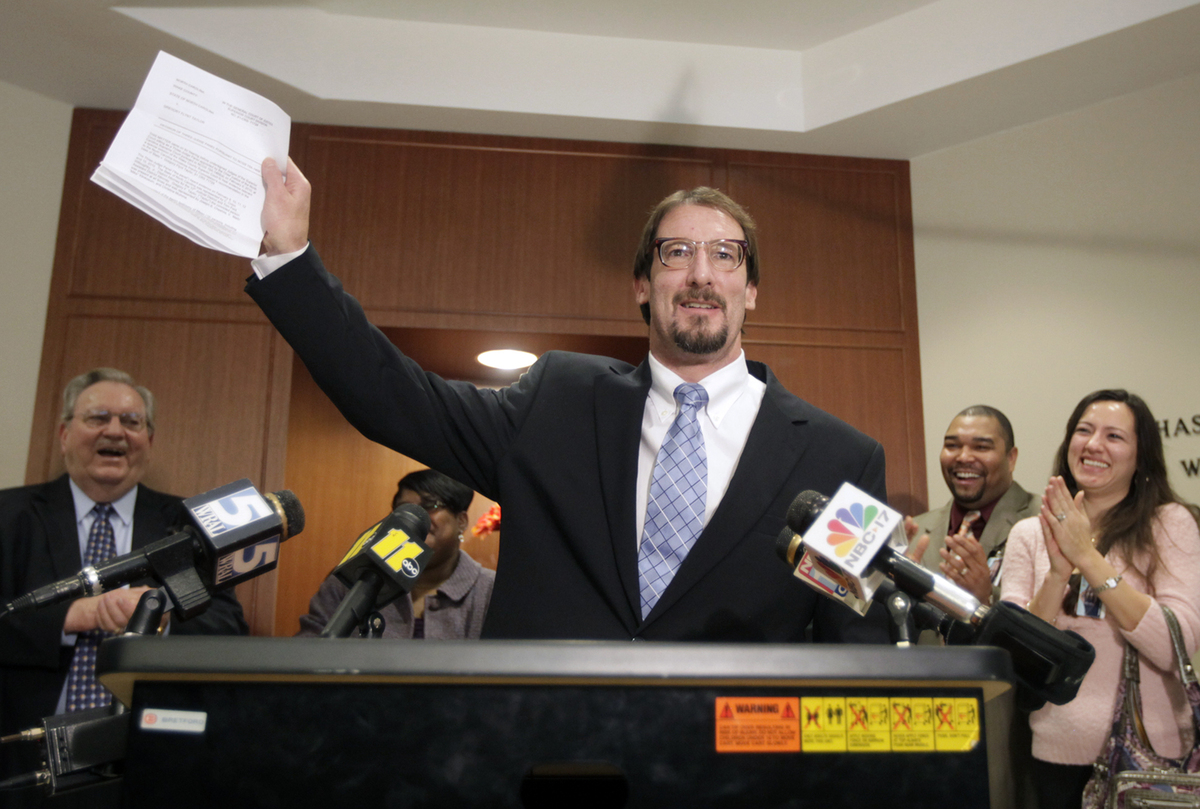 Greg Taylor holds up his release papers after he was unanimously exonerated by a three-judge panel in Raleigh, N.C., in 2010. Taylor, who had been in prison since 1993 for murder, is now suing several people who worked at a crime lab, claiming their erroneous findings landed him in jail.

Three years ago, a report from the National Academy of Sciences exposed serious problems in the nation's forensic science community. It found not only a lack of peer-reviewed science in the field, but also insufficient oversight in crime laboratories.

Little has changed since that report came out, but concerns are growing as scandals keep surfacing at crime labs across the country.

In the early 1990s, Greg Taylor became a suspect in a North Carolina murder case after his truck was found near the crime scene. The key physical evidence against him was a spot on his truck. A report from a state lab showed there were indications of blood. He was sentenced to life in prison.

"I spent a lot of years really wondering about how the victim's blood could have been on my truck," Taylor says.

In his case, an initial lab test showed indications of blood, but then a follow-up test came back negative. It wasn't human blood.

This critical information was excluded from the lab's final report, and Taylor's attorney didn't have access to it.

Years later, his lawyers uncovered the negative test results. In 2010, after 17 years in prison, Taylor was exonerated, and his story unraveled a bigger scandal at the lab.

Chris Swecker, a former assistant director from the FBI, audited the lab's work and found it produced biased reports for more than a decade.

"What we found was over 200 cases where the reporting of the results of blood examinations were very weighted toward the prosecution," he says.

Taylor is now suing several people who worked there.

Marvin Schechter, a defense attorney who served as an adviser to the National Academy of Sciences forensics report, recommends making all public crime labs independent.

"We seem to believe in this country that forensic work is the property of the police department and the district attorneys, and it should not be. If it's science, that should be done by independent scientists," Schechter says.

In 2011, questions arose about the accuracy of testing evidence at a Nassau County crime lab. In that case, the police-run lab was shut down and thousands of cases were thrown into question.

New York is one of only a few states that require labs to be accredited. It relies on a national nonprofit agency called the American Society of Criminal Lab Directors Laboratory Accreditation Board (ASCLD/LAB).

Its inspectors examine hundreds of labs in nearly every state. But Schechter says they don't truly scrutinize labs.

"When ASCLD/LAB comes to a laboratory for an inspection, it announces that they're coming. It's not a surprise inspection. Everybody gets a chance to clean up their act," he says.

ASCLD/LAB inspectors found a long list of problems at the New York lab years before it was closed. But they never revoked its accreditation, and it's not their policy to notify the public when they find issues.

The Key To Reform

"What it means is that we have gone in and looked at the laboratory's quality system and determined that they have operational policies and procedures in place that when followed, will ensure that the laboratory generally does quality work," Keaton says.

It turns out that Ralph Keaton was second in command at the North Carolina lab during the time it mishandled Greg Taylor's case, and Keaton is one of the people Taylor is suing.

"You might expect something like this from the police or some sort of sleight of hand by the prosecution or whatever. But you never expect it from a scientist or a supposed scientist at a lab," Taylor says.

A few bills aimed at reforming forensic science have recently been put forward in Washington, but none has passed. Meanwhile, on Long Island, a new lab has been set up, run by civilian scientists, not the police.