Accessibility links
A Thanksgiving Menu That Goes Back To The Roots The first Thanksgiving was something of a joint venture between pilgrims and Native Americans. Chef Richard Hetzler of Mitsitam Native Foods Cafe shares a menu that celebrates the first settlers and the country's first tribes. 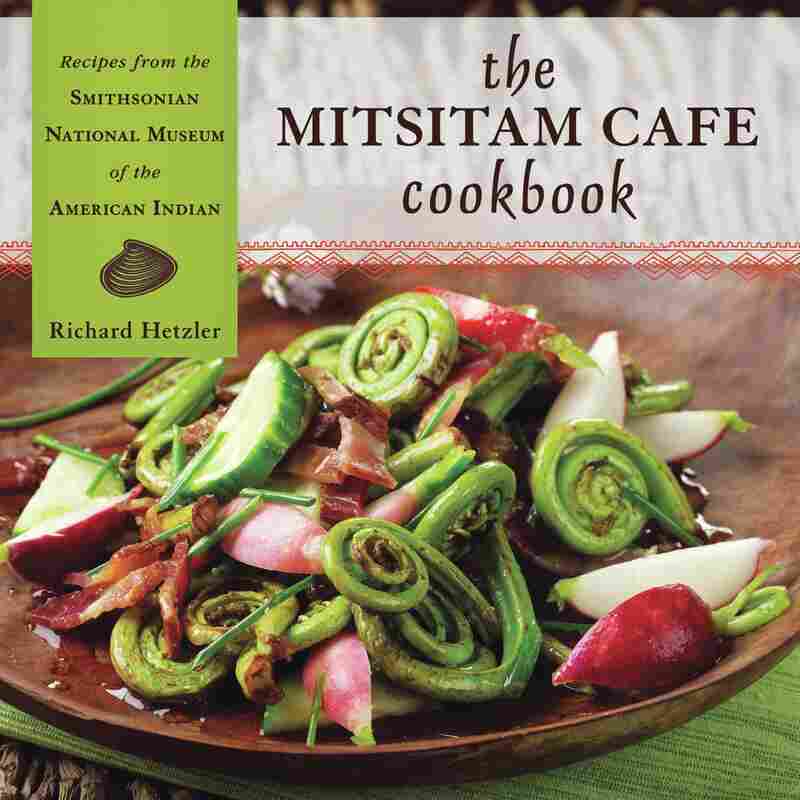 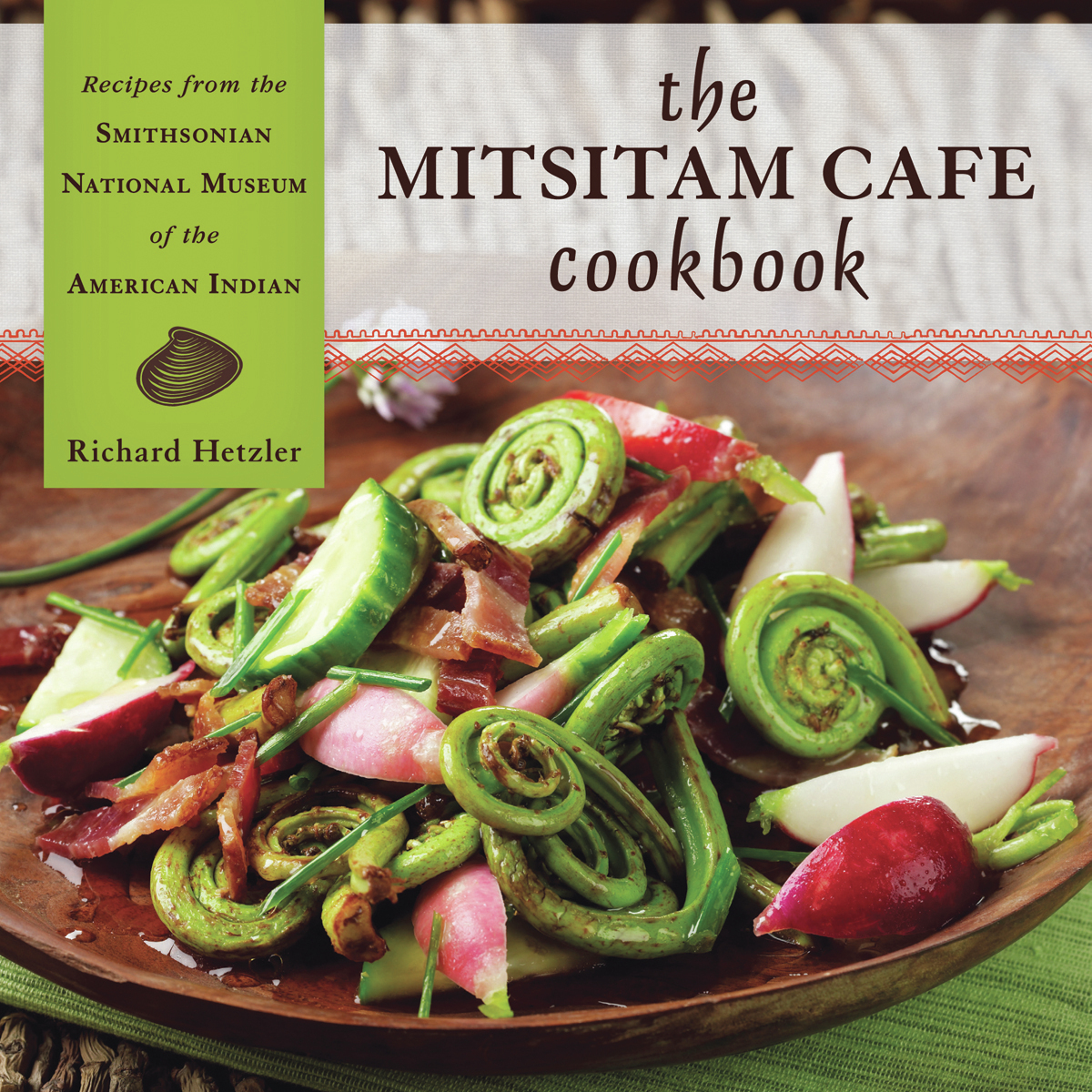 Everyone knows the schoolhouse version of the first Thanksgiving story: New England pilgrims came together with Native Americans to share a meal after the harvest. The original menu was something of a joint venture, but over the years, a lot of the traditional dishes have lost their native.

For those who want to create a feast that celebrates the flavors that Native Americans brought to the table, Chef Richard Hetzler has an entire menu of options from his award-winning cookbook, The Mitsitam Cafe Cookbook.

The recipes are drawn from the Mitsitam Native Foods Cafe at the Smithsonian National Museum of the American Indian, where Hetzler is lead chef. Ever since opening the cafe, he has seen a growing interest in native cooking. He attributes it to Americans wanting to know more about their history, and to the health benefits of native foods. He tries to stay true to that tradition by keeping his recipes simple.

"There's not a lot of stuff put into them to change those flavors or manipulate what you're tasting," Hetzler tells NPR's Celeste Headlee. "You're getting the true healthiness of that dish." Hetzler also takes indigenous foods and ingredients from different regions throughout the Western Hemisphere, and adapt them to today's palate.

"If you think about the history of food," says Hetzler, "a lot of that dates back to Native Americans and what they were doing." Those methods include cooking dishes with ingredients that have a natural synergy. Hetzler's Three Sisters Salad uses corn, beans and squash that have been traditionally planted and grown together.

For hesitant home cooks, Hetzler isn't asking you to throw out grandma's recipes. "Branch out, try one thing," he says. "Nobody wants to change their whole meal. But you could incorporate one piece and start making traditions of your own, that carry down to your children or your family members, and keep going from there."

The following recipes are excerpted from The Mitsitam Cafe Cookbook, by Richard Hetzler:

In Haudenosaunee (Iroquois) villages, as in many other Native communities, women planted, hoed, weeded, and harvested communally, often working in large groups. The staple crops they grew — corn, beans and squash — came to be known as The Three Sisters. Not only do the three foods grow well together (the beans climb the natural trellis provided by the cornstalks, while the broad-leaved squash plants spread out below, preventing weeds and keeping moisture in the soil), but when cooked together they provide nearly complete nutrition.

Here, grilled squash and corn are mixed with cranberry beans and yellow and red tomatoes. 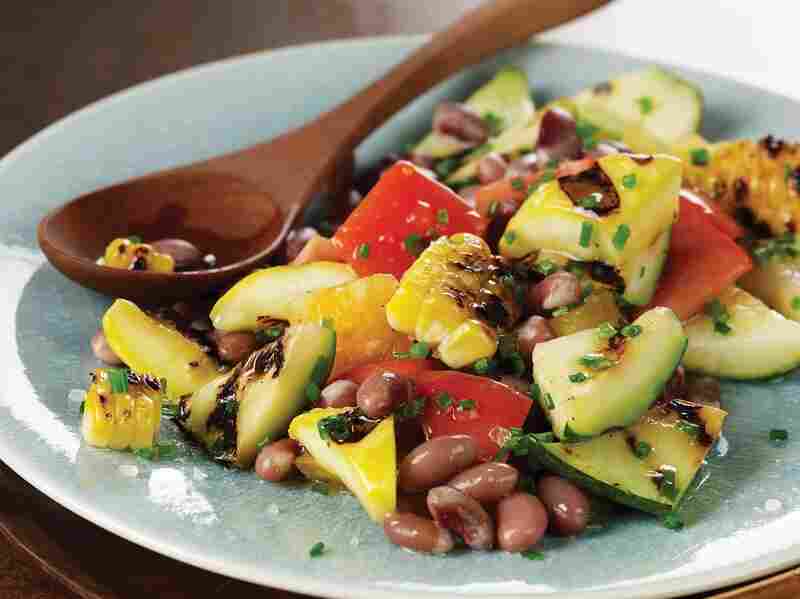 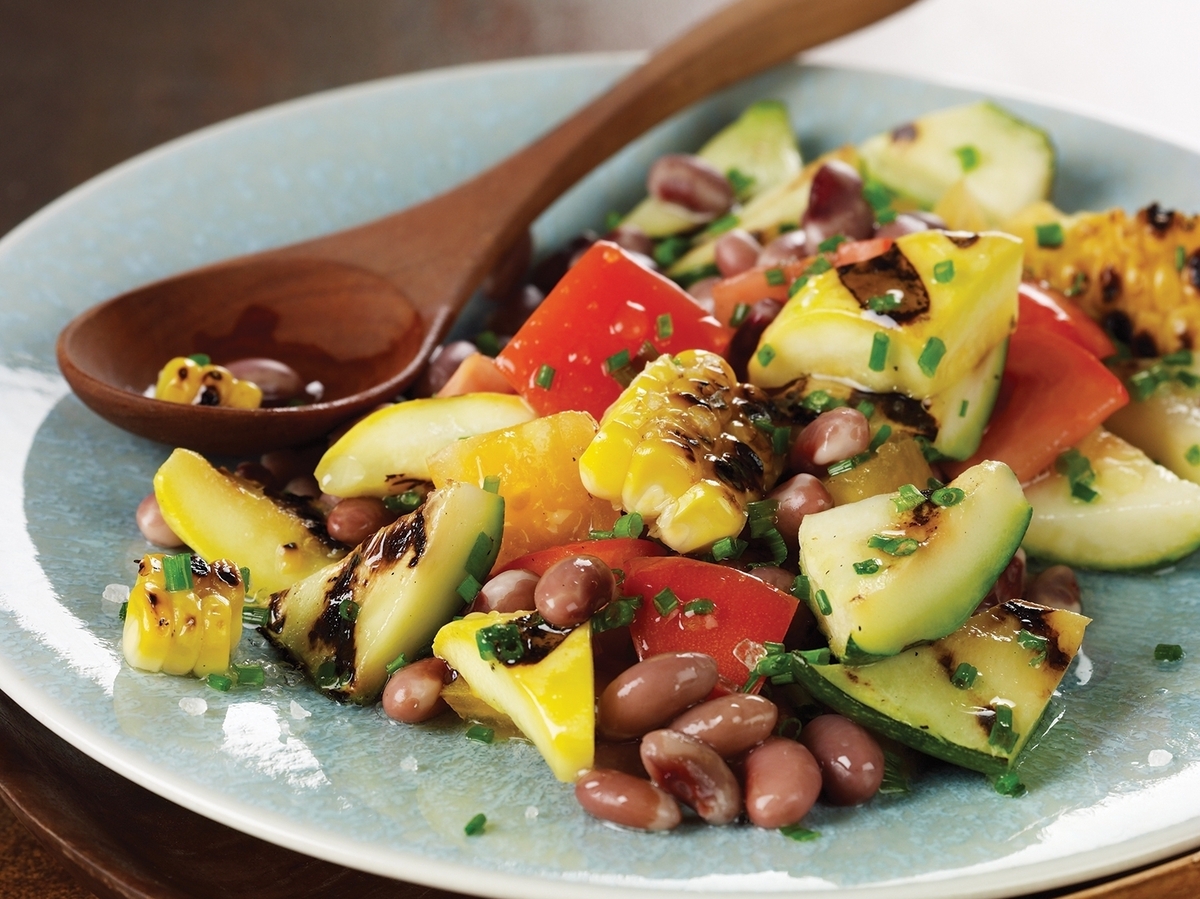 For the vinaigrette: In a small bowl, combine all the ingredients and whisk to blend. Cover and refrigerate for at least 1 hour, or up to 10 days.

For the salad: Prepare a hot fire in a charcoal grill, or preheat a gas grill to high. Brush the zucchini, squash, and corn with oil. Season the vegetables on all sides with salt and pepper. Grill the zucchini and squash until crisp-tender and grill-marked on both sides, about 10 minutes. At the same time, grill the corn until lightly browned, turning to cook all sides, 4 to 5 minutes.

Transfer the zucchini and squash to a cutting board and finely dice, then empty into a large bowl. Cut the kernels from the corn and add to the bowl along with the beans and the yellow and red tomatoes. Add 1/4 cup vinaigrette and toss to coat. Season with salt and pepper and toss again.

Serve at room temperature or cold.

For the vinaigrette: In a medium bowl, combine the vinegar, honey, and mustard. Gradually whisk in the oil until incorporated. Stir in the salt, pepper, and mustard seeds. Cover and refrigerate.

For the salad: Preheat the oven to 350°F. Put the vegetables in a medium bowl and toss with the oil, salt, and pepper. Spread on a rimmed baking sheet and roast until crisp-tender, 50 minutes to 1 hour. Remove from the oven and let cool slightly.

Transfer the roasted vegetables to a medium bowl and add the vinaigrette. Toss to coat. Taste and adjust the seasoning. 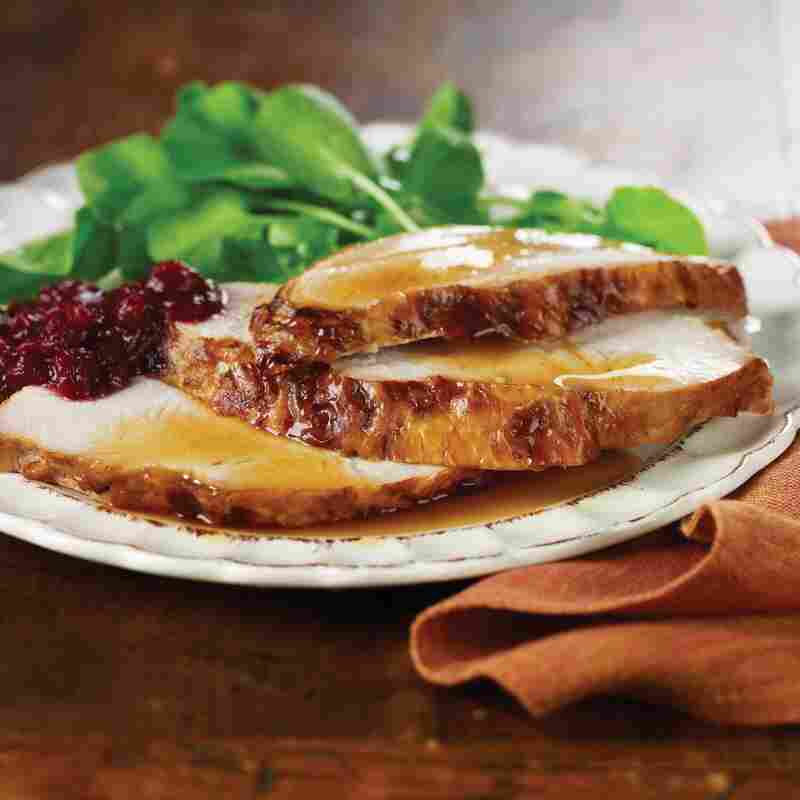 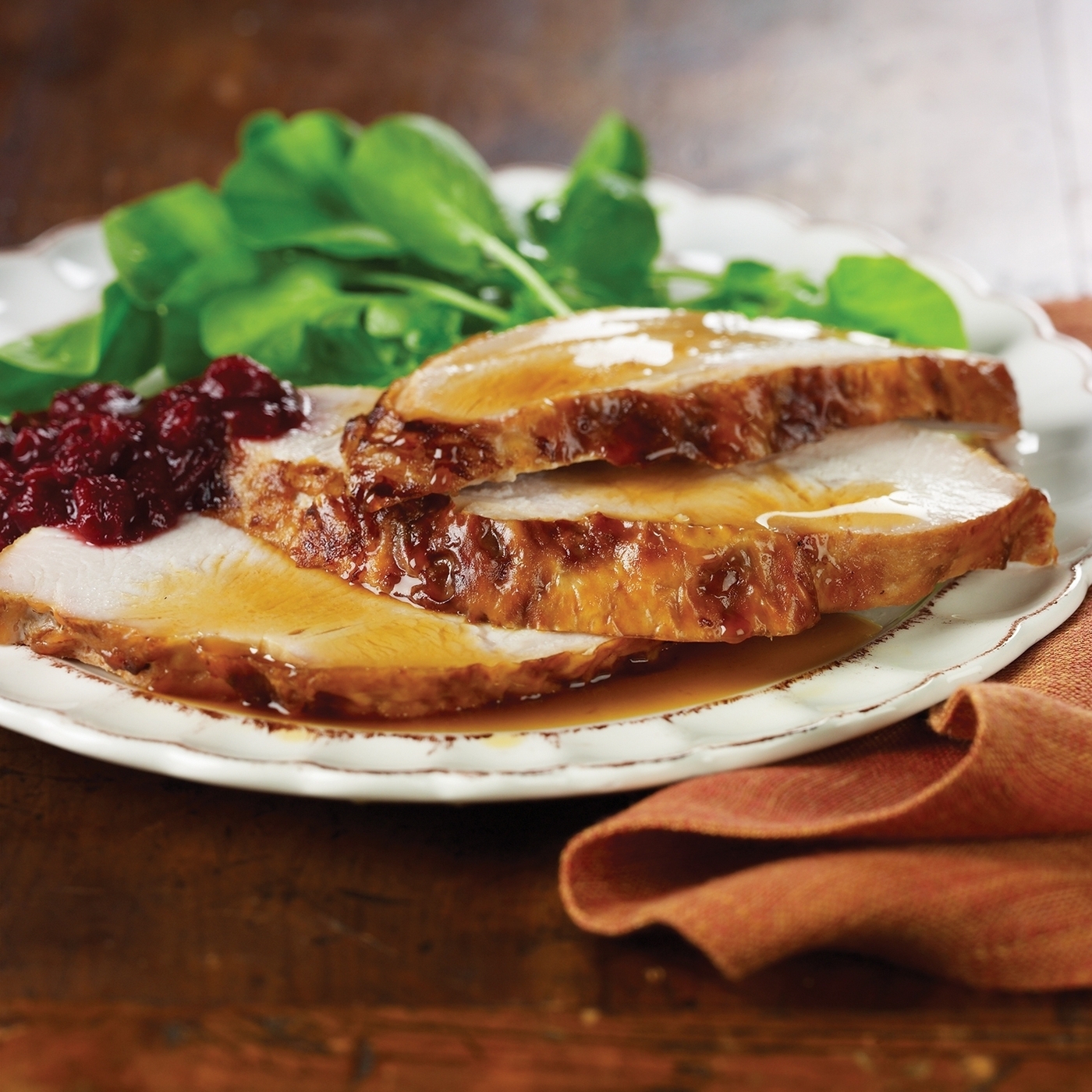 In a large, nonreactive stockpot, combine all the brine ingredients except the ice. Stir to dissolve the salt and sugar. Bring to a boil over high heat and cook for 3 minutes. Remove from the heat, add the ice, and set aside to cool to room temperature. Add the turkey breast, cover, and refrigerate for at least 2 days, or up to 3 days.

Preheat the oven to 325°F. Remove the turkey breast from the refrigerator and the brine. Rinse, pat dry, and rub with the butter, both under and on top of the skin. Season on both sides with salt and pepper. Place the turkey breast on a rack in a roasting pan and roast 2 to 2 1/2 hours for a bone-in breast or 30 to 45 minutes for a boneless breast.

Meanwhile, for the maple butter baste, melt the butter over low heat in a small saucepan. Add the maple syrup and increase the heat to high. Bring to a rolling boil and remove from the heat.

Cook the turkey for about 15 minutes longer, basting with the maple butter every 5 minutes. The turkey is done when an instant-read thermometer inserted into the center of the breast and not touching the bone registers 150 to 165°F (150°F will provide juicier white meat). Remove from the oven and transfer to a carving board. Tent with aluminum foil and let stand for 10 minutes. Carve the turkey breast and serve with the relish, if desired.

When reservations were created in the mid-1800s, the U.S. government promised to supply Native people with "commodity" foods to replace the subsistence foods that were no longer available to them. For European Americans, a basic commodity is wheat, so wheat flour became a staple for people whose diets for thousands of years had been based on corn. Over the past 150 years, this change has had many effects on Native American cooking, not the least of which is the invention of fry bread. One of the most popular and delicious (and least healthful) of modern Native foods, fry bread is for many communities both a festival and an everyday food. 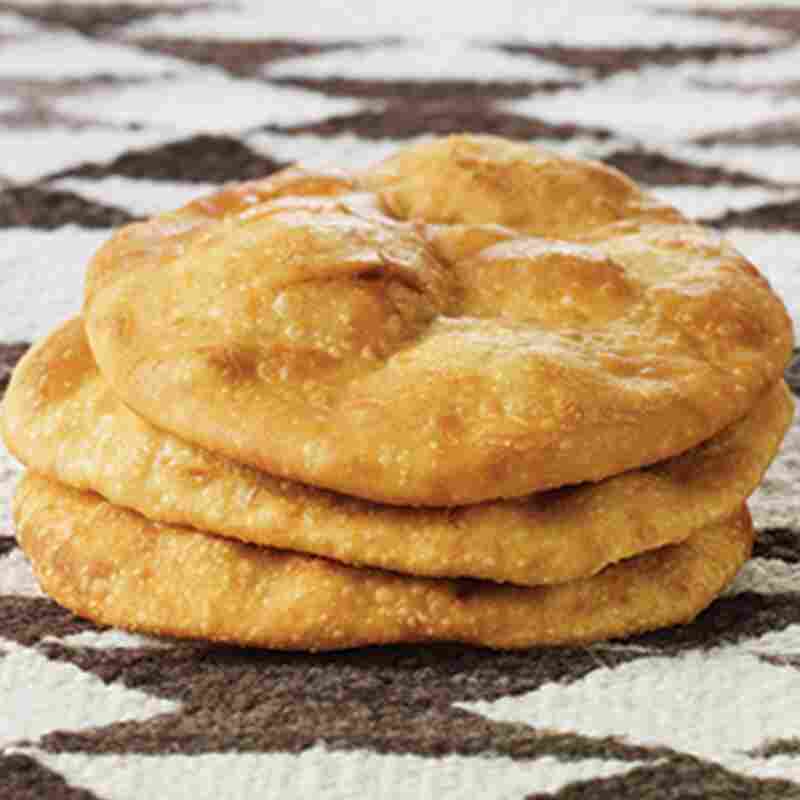 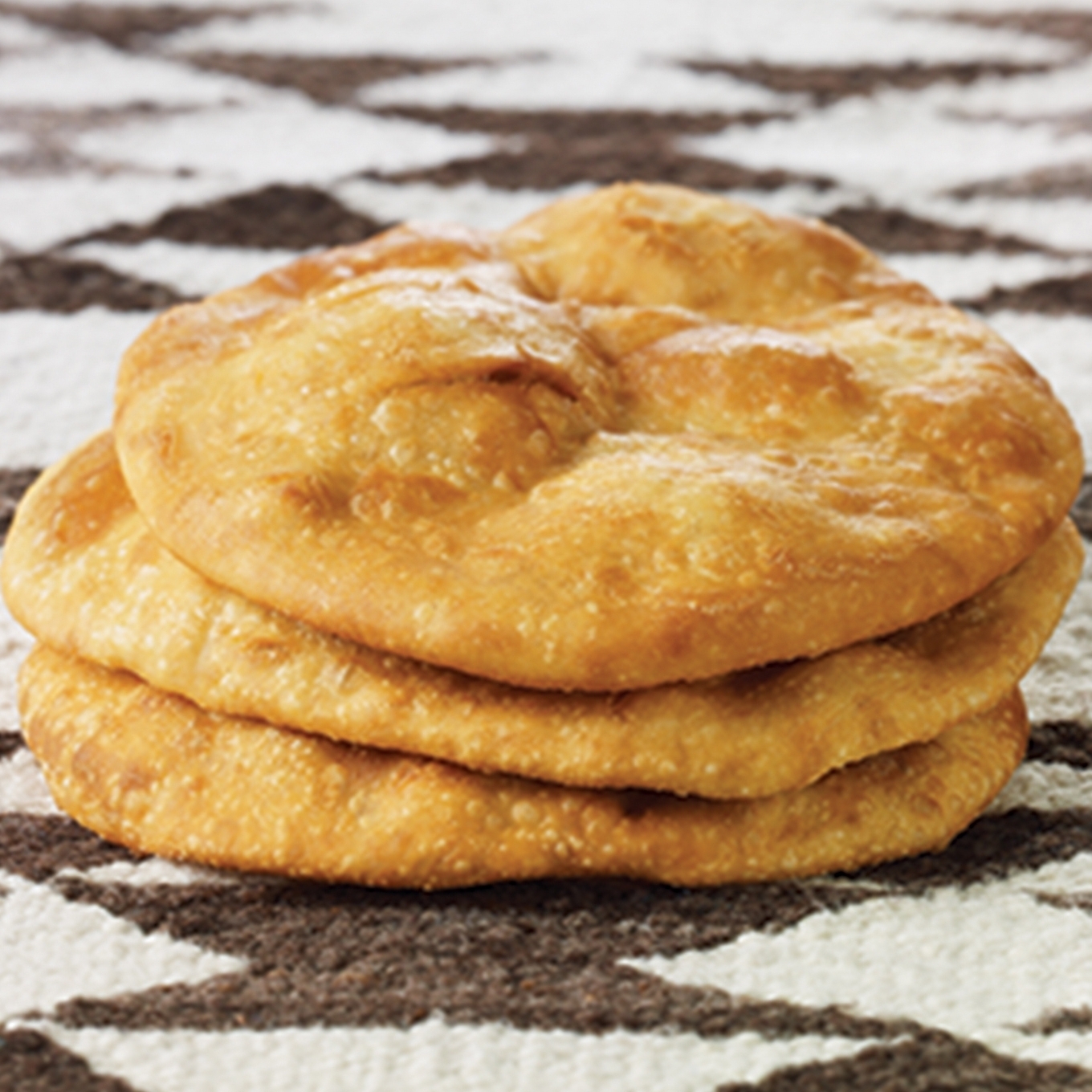 Recipes and techniques vary, but the result is basically the same: a dough leavened with baking powder and deep-fried until puffed and golden brown.

In a medium bowl, combine the flour, baking powder, salt, and the 2 tablespoons sugar. Stir with a whisk to blend. Stir in the 3/4 cup milk to make a stiff dough, adding a bit more if necessary. On a lightly floured board, divide the dough into 6 pieces. Form each into a ball, then roll into a disk about ¼ inch thick.

In a Dutch oven or deep fryer, heat 3 inches oil to 350°F on a deep-fat thermometer. Using a sharp knife, cut an X in the center of each dough disk. Place one disk at a time in the hot oil and cook until golden brown, about 2 minutes on each side. Using tongs, transfer to a paper towel–lined plate to drain. Keep warm in a low oven while frying the remaining disks.

Serve at once, either plain or sprinkled with cinnamon sugar.

Preheat the oven to 350°F. Butter a baking sheet.

In a medium bowl, combine the flour, 2 tablespoons of the sugar, the baking powder, and salt. Stir with a whisk to blend. Using a pastry cutter, cut in the butter until the mixture resembles coarse meal. Using a fork, stir in the cold water just until the dry ingredients begin to come together.

On a floured board, form the dough into a disk. Wrap in plastic wrap and let rest for 15 to 20 minutes.

Meanwhile, in a deep bowl, beat the heavy cream until soft peaks form. Beat in the remaining 2 tablespoons sugar.

To serve, place one round on each of 4 dessert plates and top each serving with whipped cream and berries.