Accessibility links
Through Meditation, Veterans Relearn Compassion The epidemic of post-traumatic stress disorder has pushed the VA to explore new and sometimes unorthodox treatments. In one VA facility in Menlo Park, Calif., veterans of current and past wars gather to meditate and break down the shields that combat forced them to hold. 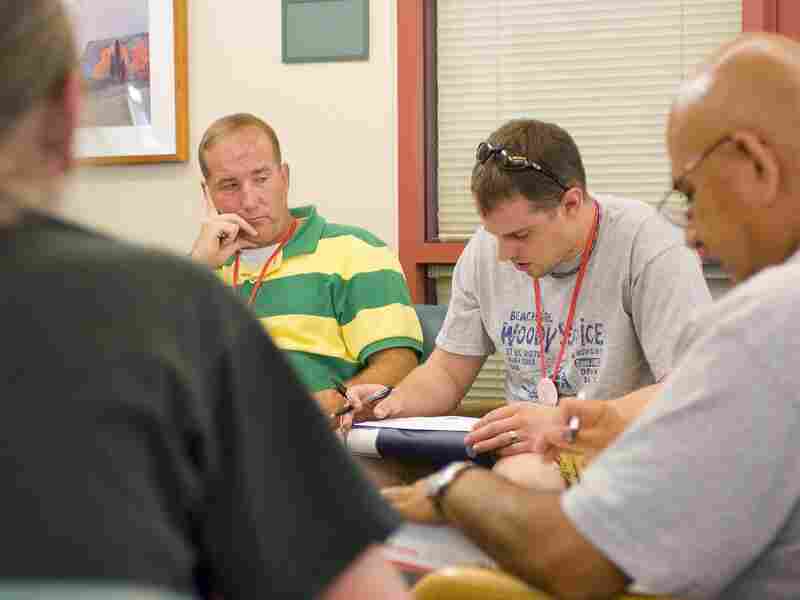 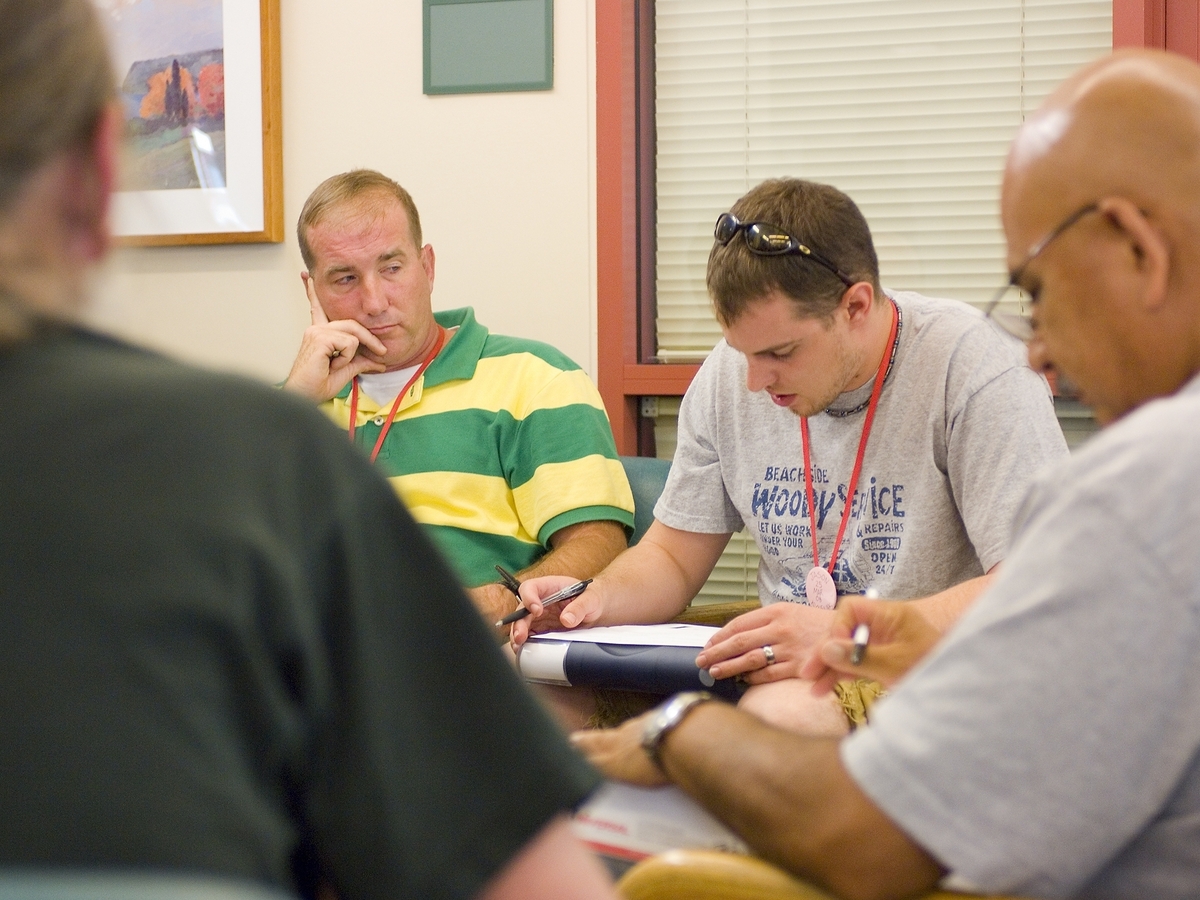 Veterans participate in a therapy session at the Veterans Affairs center in Menlo Park, Calif.

Marine Esteban Brojas is rocking back and forth in his chair in a rehabilitation center for veterans in Menlo Park, Calif. He rubs his hands together so quickly you can hear them.

"You know, you're going into a building, and you know there's a grenade being popped in there," he says, "and there's a woman and a child in there ... and you're part of that?"

When Brojas came back from Iraq in 2003 to his home in Greenfield, Calif., he reunited with his wife and met his newborn daughter for the first time. His wife was excited to see him, but he found himself not wanting to pick up his daughter.

"The fact of holding my daughter in my arms, you know, or even being intimate with my wife? Very difficult. Very difficult because of the trauma," he says.

Multiply Brojas by the hundreds of thousands of newly returned servicemen and servicewomen the Department of Veterans Affairs estimates are suffering from PTSD, and you can see the scale of the problem here. These men and women cannot leave combat completely behind.

The Search For New Solutions

Despite how common this is, there are no easy answers for how to treat PTSD. Talk therapies can work, but they take a long time and not all vets stick with them.

Antidepressants, like Prozac, have been disappointing. In 2007, a VA study found that no drug should be considered effective for PTSD in vets, but today, they're still widely prescribed, and a lot of vets do find them useful.

In general, PTSD is a huge problem with only a handful of half-answers. The VA Medical Center in Menlo Park is exploring new possibilities through its residential treatment center.

Five men, including Brojas, sit in armchairs in the center's rec room. A couple of therapy dogs — golden retrievers named Eldridge and Elise — are curled up on the floor.

Two things are surprising about this scene. One is that half of these men are in their 50s and 60s — vets from the Vietnam era, not more recent wars. The other is that they're here to meditate.

Leah Weiss, a meditation expert at Stanford University, has been leading a weekly guided meditation and discussion group here for a year.

Similar scenes are happening at VA clinics in Texas, Virginia, upstate New York and Michigan. These projects look at several different types of meditation — mindfulness, transcendental — to see what works in treating PTSD.

This particular technique is called "compassion cultivation training." Weiss, who helped develop it, tells the men to think of a person they care about and to "allow yourself to feel the presence of this person." There's a phrase Weiss repeats, like a mantra: "That person is just like me."

The idea here is that in combat, the way to stay safe is to think of everyone as a potential threat. Fear and distrust are default. But with PTSD, it stays that way, even after combat is over. The soldier with PTSD has lost the ability to relate to people as just people. Compassion meditation is about getting that ability back, learning to see oneself in others.

After about 20 minutes of this, Weiss brings the meditation to an end. The men open their eyes, readjust in their chairs and stretch a little. Weiss opens up the discussion.

The Vietnam vets talk first. Some say they'd never even heard of PTSD until a few years ago. Now that they're getting treatment, it's like they're making up for lost time.

"The idea, of you saying, 'just like me,' that does a lot for me in a sense because I know how I'd like to be treated or how I want to feel," says John Montgomery, who has a bushy gray mustache and a tattoo of a scorpion on each forearm. "So if I'm showing that to somebody else, I find myself looking at me a little better and being satisfied with what I see."

Montgomery says he knows that what the meditation is teaching him sounds incredibly basic: Treat others the way you want to be treated; it's Human Relationships 101. And yet, it's completely at odds with the person the Vietnam War trained him to be.

"You're in a situation where you don't negotiate. You either make it or you don't," he says, "because we were taught to survive."

When he came home, Montgomery says, he had forgotten how to be a son, a parent, a friend. This lasted for decades.

John Perry, a soft-spoken Vietnam vet from Phoenix, steps in.

"It's pretty much just a self-imposed prison," he says. His story is much the same as Montgomery's.

"I didn't talk to anybody. No one would ask me any questions about it. I wouldn't answer if they did," Perry says. "So isolation has been my problem for 40 years."

No one says it out loud, but it's clear what these vets are saying to the younger guys in the room: Fail to deal with this now, and we are your future — decades of isolation, substance abuse, ruined relationships.

Those are the stakes for Iraq vet Brojas, who sits across the room from Perry and Montgomery. This discussion has thrown him into a memory so intense and real, it's like he isn't even in the room.

"Knowing the fact that there's a man running from you, and you unload [your weapon] ... and he's dead right in front of you," he says. "It's a close-combat situation when that happens. And it's hard."

Dorene Loew, the director of the Menlo Park trauma program, steps in. She knows that every time Brojas relives this memory, he falls deeper under its spell. She needs to bring him back.

"You're not there right now. You're right here," Montgomery tells Brojas. "You're in this environment, here."

Montgomery knows exactly what to say.

It works. Brojas comes back and calms down. He says he'll be back for more meditation sessions, and he's finding other ways to ground himself, like taking deep breaths.

Meanwhile, Montgomery has done something he thought he had forgotten how to do: feel compassion. In a few weeks, he'll leave this program and go back to his family — a different man, he hopes, than he was when he came here.