Accessibility links
Animals Seized From Colombian Narcos Find A Home Colombian drug traffickers have a thing for exotic animals. But what happens when those traffickers are arrested and extradited? In southwestern Colombia, one women has created a refuge for hundreds of abused animals, many of them previously owned by traffickers. 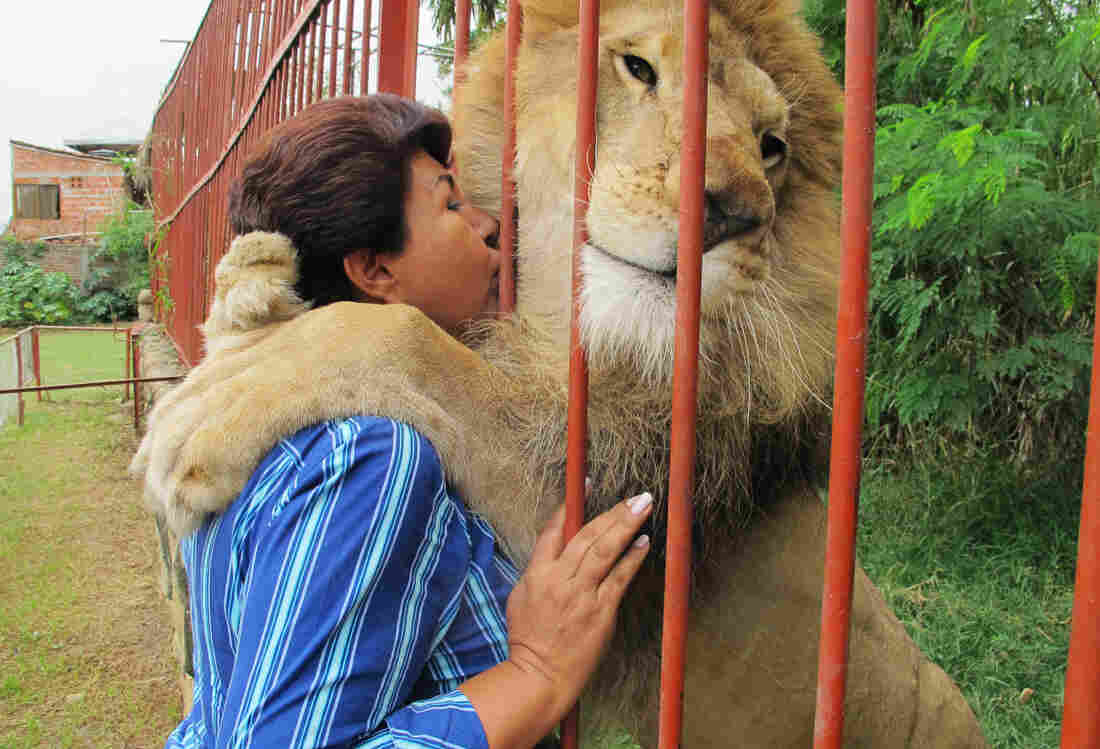 Ana Julia Torres cares for hundreds of abused animals at a refuge in Cali, Colombia, including this lion named Jupiter. Many of the animals were previously owned by drug traffickers who have been arrested. Juan Forero/NPR hide caption 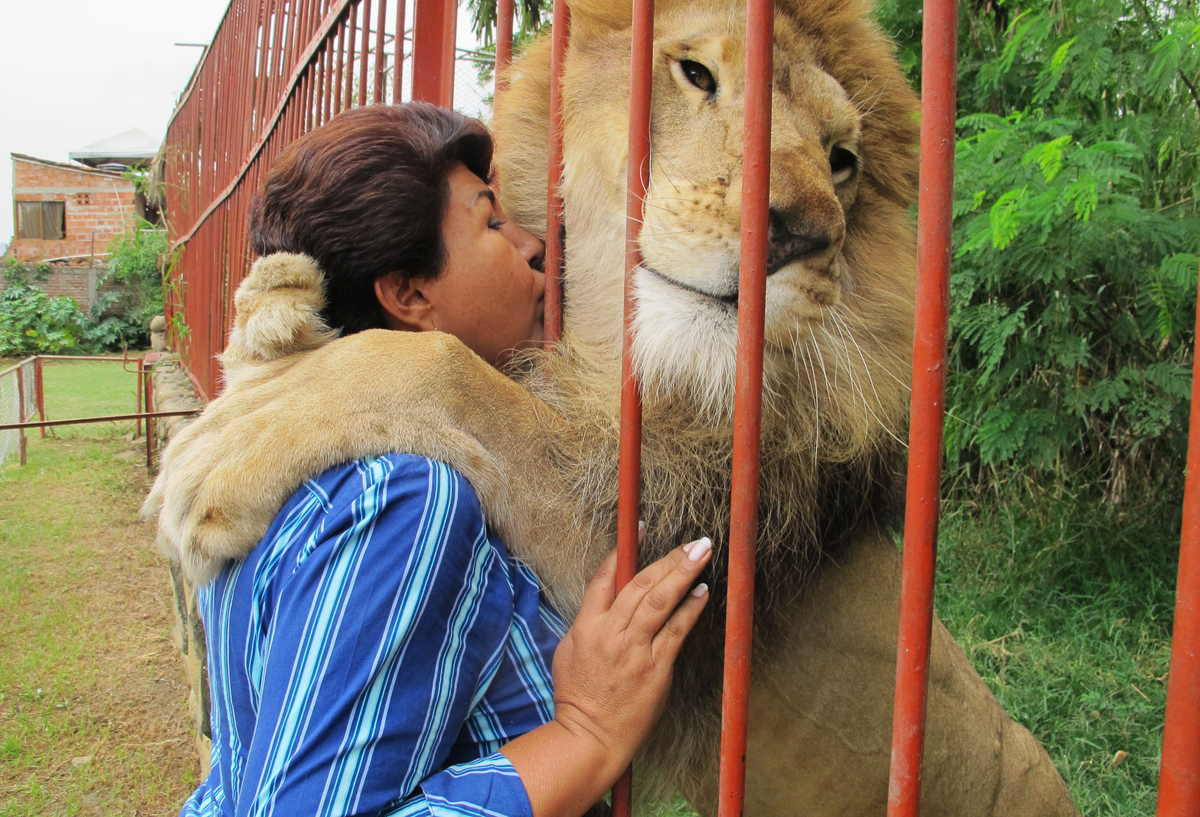 Ana Julia Torres cares for hundreds of abused animals at a refuge in Cali, Colombia, including this lion named Jupiter. Many of the animals were previously owned by drug traffickers who have been arrested.

Villa Lorena, in southwestern Colombia, is an animal refuge like no other.

There are four lions, nine Bengal tigers, jaguars, cougars, a crocodile, a speckled bear and an ostrich. There's a chimpanzee named Jocko, spider monkeys and hundreds of brightly colored birds.

One thing they all have in common — they've been abused, says Ana Julia Torres. Monkeys have been beaten. Birds have had their beaks cut off.

For 18 years now, Torres, 52, has been collecting animals whose treatment underscores the darker side of Colombian society.

Drug kingpins and death-squad commanders used to have jaguars and tigers as mascots. With so many of those men extradited to the United States, the animals have wound up in Villa Lorena in the city of Cali.

The environmental police also provide a steady supply of animals confiscated from smugglers and fly-by-night circuses.

"I have two human children, and the rest of my children are 800 animals — some clawed and some very hairy, but all of them wonderful," Torres says.

Some of the animals are housed in tight cages, others in large enclosures similar to those of a modern zoo. 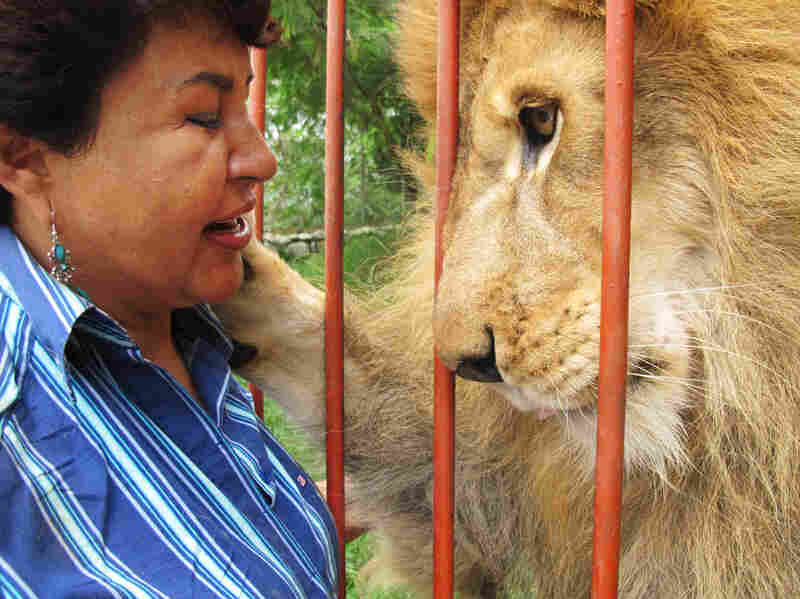 There are some 800 animals at the refuge run by Torres, but Jupiter the lion is her favorite. Juan Forero/NPR hide caption 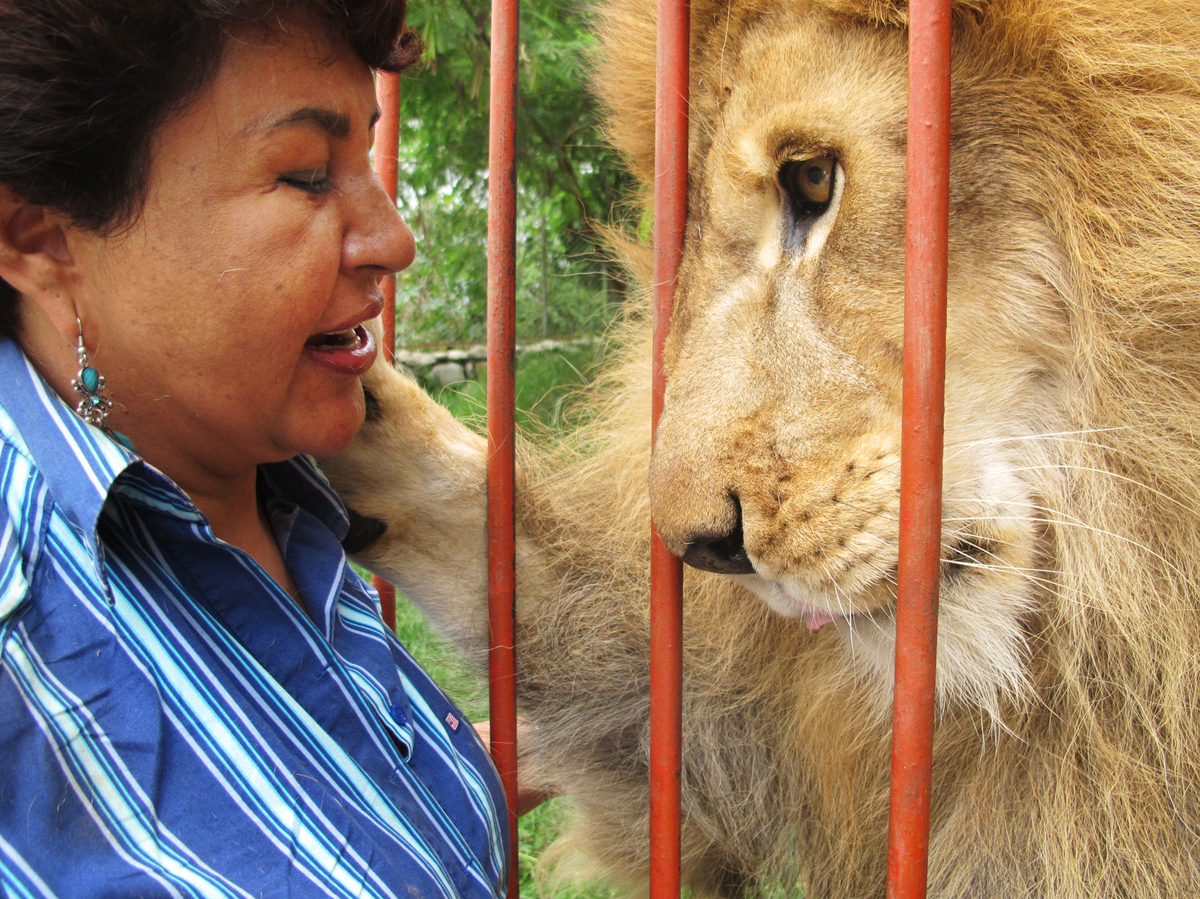 There are some 800 animals at the refuge run by Torres, but Jupiter the lion is her favorite.

Donations and revenues from three private schools she runs help fund Villa Lorena and its 10 employees.

"They say I'm crazy because I've dedicated my life to this," she says. "Because I've forgotten about material things."

Few people, though, ever get to see the collection. It's open to the children in her schools and the journalists who come knocking.

"This is not a zoo," she says. "It's a refuge, an old-age home; a hospital. [It's] a place where we love, protect, defend and respect animals."

Still, even Torres has her favorites, like the big cats. None is closer to her than Jupiter, a 12-year-old lion, whom she treats like a bouncing baby.

Jupiter is big, powerful and ferocious, but he's a pussy cat with Torres, who hugs and kisses him through the red bars of his cage.

Though Villa Lorena has a permit, and the support of state wildlife officials, some have questioned whether some of these animals shouldn't be put to sleep.

Torres firmly believes, however, that animals should be treated like people.

"Why do we believe that an old animal should be put to death? That because they don't have a leg they can't live?" she says. "What we've shown here is that they can live happily."

On a tour of the six acres that make up the refuge, Torres stops to talk to her favorite tigers and Winnie the Pooh, a bear. She even has a way with the storks that seem to answer her by clicking their beaks.

Then there's Lorenzo, a water buffalo — brutish and not particularly attractive. While hugging Lorenzo, Torres says she detects a teardrop on his heavy, hairy face.

She tells him not to cry, and that she loves him like all of her children.