Accessibility links
Sandy Victims Get Bird's-Eye View Of Homelessness In New York City, Thanksgiving has been mass-produced in shelters, churches and community centers. But many of the storm victims are sharing their holiday meal with people who are hungry year-round.

It's been almost a month since Superstorm Sandy slammed into the Northeast, and for many people, it means the first Thanksgiving outside of their destroyed homes or without the friends or family they usually visit.

In New York City, Thanksgiving has been mass-produced in shelters, churches and community centers where thousands upon thousands of storm victims can find free meals.

Many of them are sharing their first post-storm Thanksgiving with people who are hungry year-round. 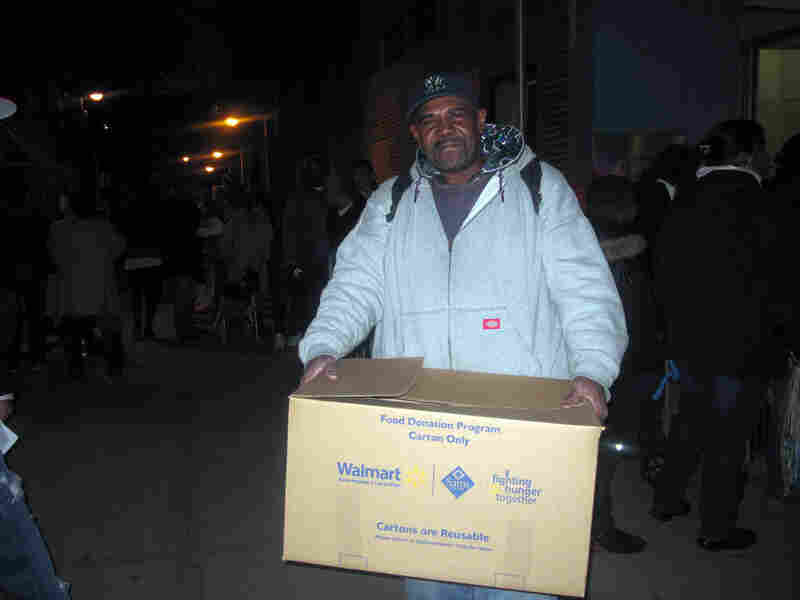 Maurice Geddie of Brooklyn's Red Hook neighborhood picks up a free turkey donated by a local grocery store. He's hoping his wife will be willing to cook it, though she's been stuck cooking for storm victims at shelters for weeks. Ailsa Chang/NPR hide caption 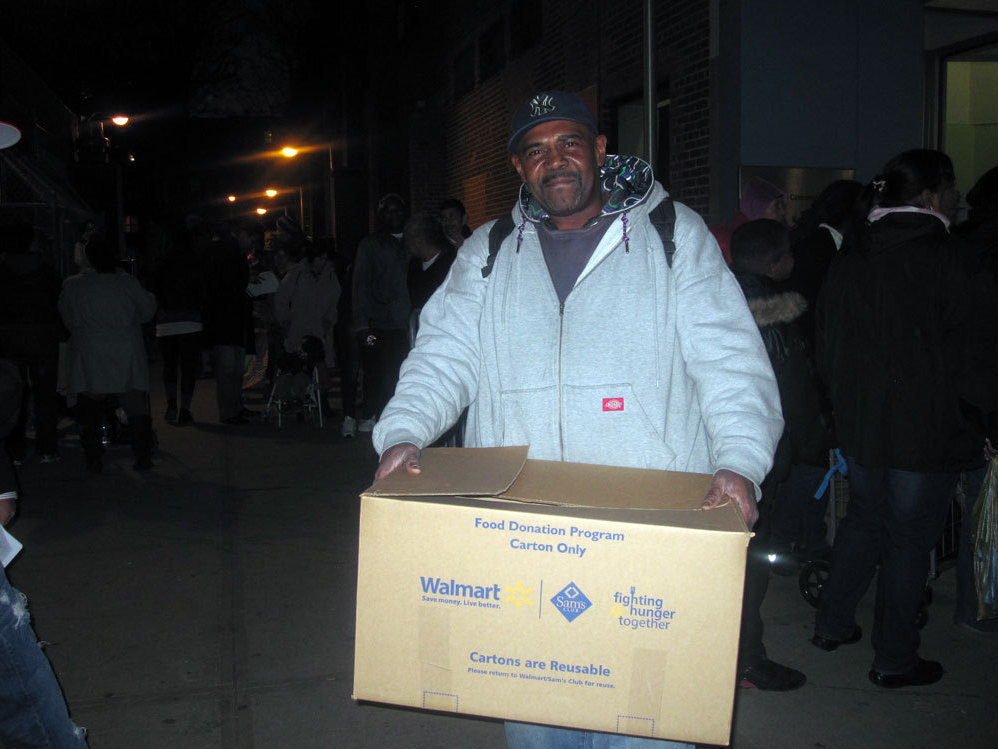 Maurice Geddie of Brooklyn's Red Hook neighborhood picks up a free turkey donated by a local grocery store. He's hoping his wife will be willing to cook it, though she's been stuck cooking for storm victims at shelters for weeks.

Mary Hennings was homeless before Sandy and she's still homeless now. She having a Thanksgiving meal Thursday at St. Mark's Church in Lower Manhattan, which was advertised as a place where Sandy victims could go. Hennings says she can't help but notice the surge in charity.

"People say, 'Oh my goodness, people lost their power, their refrigerated goods. You know, they might not have a Thanksgiving,' " she says. "Now, all of a sudden, they want to partake in being helpful, but what they fail to realize is that people like me and other good people go every day without having a warm place to sleep."

The impulse to feed has gripped this city: website after website trying to organize Thanksgiving meals for storm victims started saying days ago that they can't accept any more volunteers. Celebrity chefs are swooping in. The Food Bank banded together Wednesday with a high-end Wall Street restaurant called Cipriani to feed more than 1,000 guests.

Twelve-year-old Chantel Windham's home in the Rockaways was flooded. And now here, the live jazz band and plates of gourmet beef tenderloin just don't feel like real Thanksgiving, she says.

Windham says she's used to being around family and friends. Every Thanksgiving, she and her father would drive down to South Carolina to see her grandparents. But the family car was destroyed by the storm. Now, she's packed in at a table with her neighbor and three men she doesn't know.

In this dining room open to anyone who needs a free meal, you'll find the storm tables. There's the Coney Island table, the Rockaway table and the Staten Island table. That's where Anthony Pittius and Jessica Lamberti are sitting. They were supposed to get married this month, but then Sandy hit, and those plans washed away, along with the two wedding bands that were never worn. Gone. Lamberti's still nursing a black eye after a refrigerator hit her face that night.

"At first I was locked in the bathroom, and he had to kick in the bathroom door to get me out, and then the water was so high that everything was just floating and the fridge just smacked me right in the eye," Lamberti says. "And we had to, you know, swim out."

Lamberti and her fiancé have lived in a shelter on Staten Island ever since. All they have to wear now is donated clothes, but the two say they are grateful for the meal.

"On a regular basis we really don't get hot meals," she says.

Just wraps, Pittius adds, and Ramen soups. To be able to share this meal is a blessing, he says.

Then there are some storm victims who are hoping to host their own parties with kitchens that just got power back. In Brooklyn's Red Hook neighborhood Wednesday, hundreds of residents lined up to pick up free turkeys.

Maurice Geddie hadn't yet asked his wife for permission to be standing in line. She had told him she was too tired to prepare a Thanksgiving meal after cooking nonstop at shelters since the storm hit. Will she be a little annoyed if he now makes her cook a turkey?

Geddie says Thanksgiving is about chilling at home — your own home. And he was determined to make this year no different from years past — like it or not, Sandy.