Accessibility links
Long-Term Science: When Research Outlives The Researcher Some scientific research can't be completed in days or months — projects can take years, or even decades or centuries. This poses a challenge for scientists who must make plans for experiments that often outlive the experimenter. 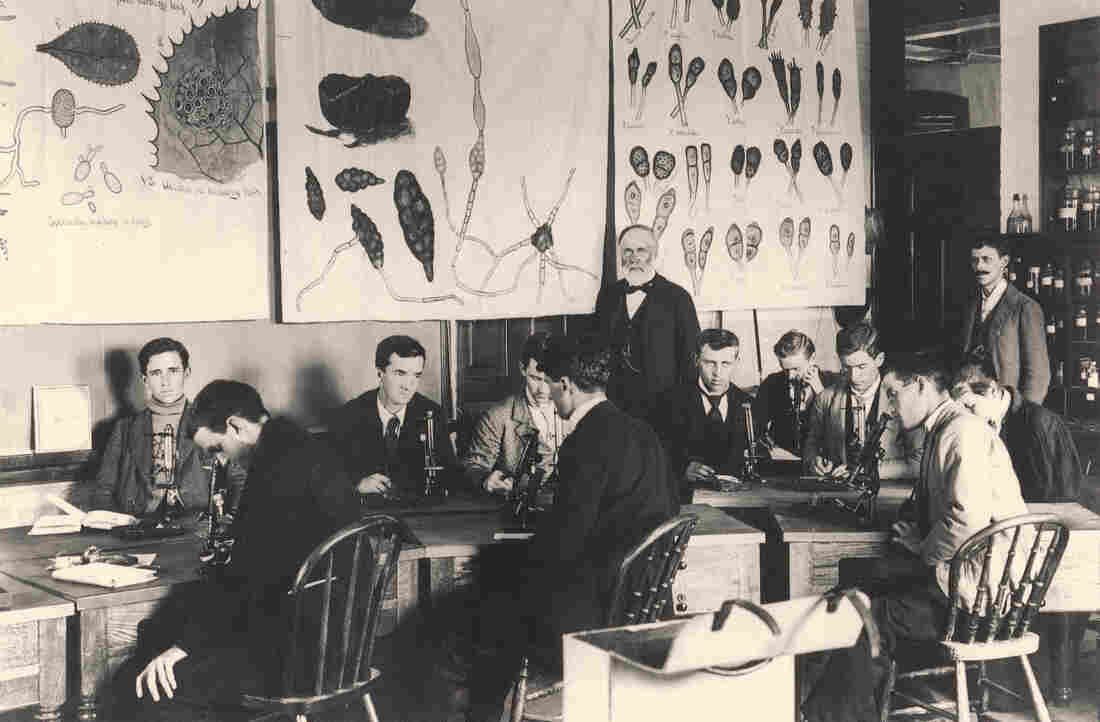 William Beal, standing at center, started a long-term study on seed germination in 1879. He buried 20 bottles with seeds in them for later researchers to unearth and plant. Michigan State University hide caption 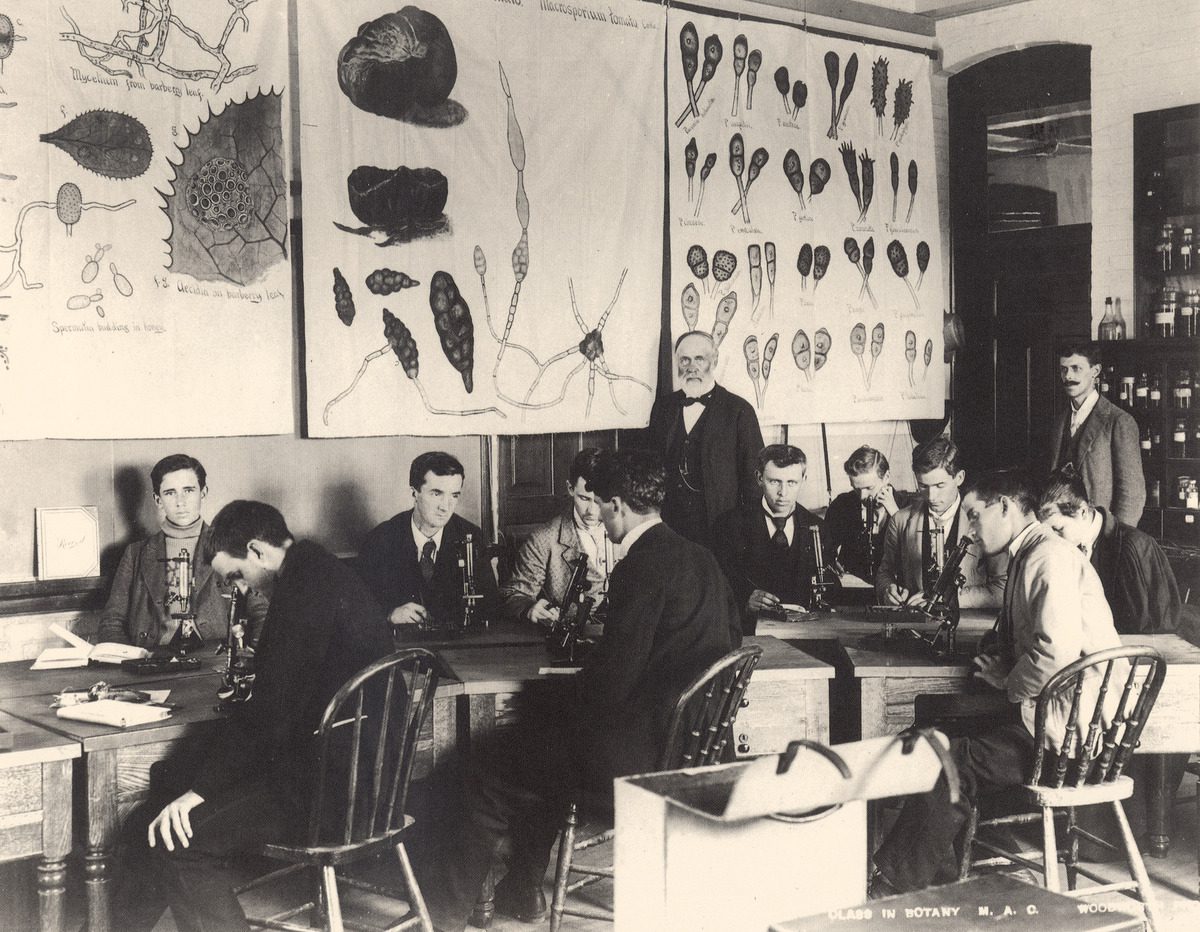 William Beal, standing at center, started a long-term study on seed germination in 1879. He buried 20 bottles with seeds in them for later researchers to unearth and plant.

A biologist who has been watching a dozen bottles of bacteria evolve for nearly a quarter of a century is hoping he can find someone to keep his lab experiment going long after he dies.

Meanwhile, just by coincidence, a botanist who works across campus is carefully tending an experiment that started before he was born, all the way back in 1879.

These two researchers, both at Michigan State University in East Lansing, represent different sides of an unusual phenomenon in science: experiments that outlive the people who started them.

Most researchers design studies to churn out results as quickly as possible. But because nature can work on vast time scales, some questions can take longer to answer than any one scientist's career.

Richard Lenski began his evolution experiment in 1988 with a simple question: Does evolution always lead to the same end point? If he started with 12 identical flasks, full of identical bacteria, would they all change over time in the same way? Or would random mutations send each bottle's population spinning off in a different direction? 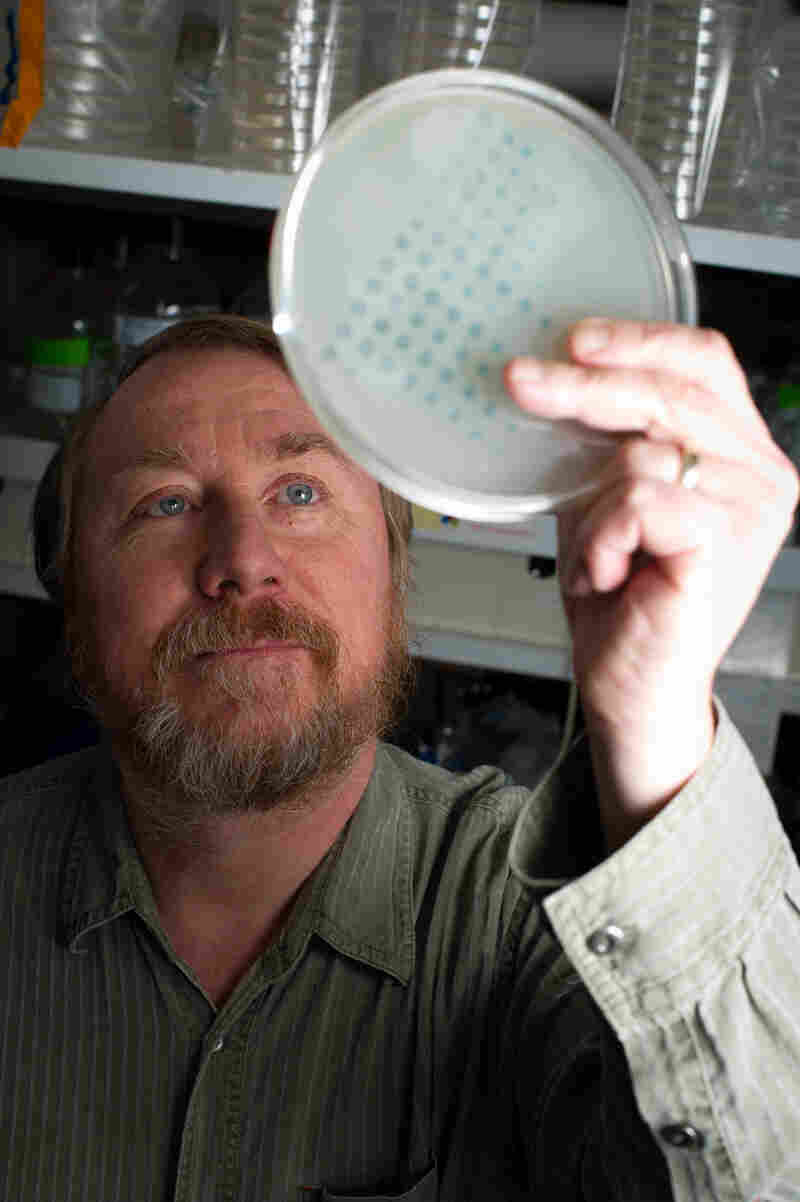 Richard Lenski examines the growth of bacteria on a plate on Jan. 12. He began an evolution experiment in 1988 with 12 identical flasks of bacteria to see if the populations would change over time in the same way. G.L. Kohuth/Michigan State University hide caption 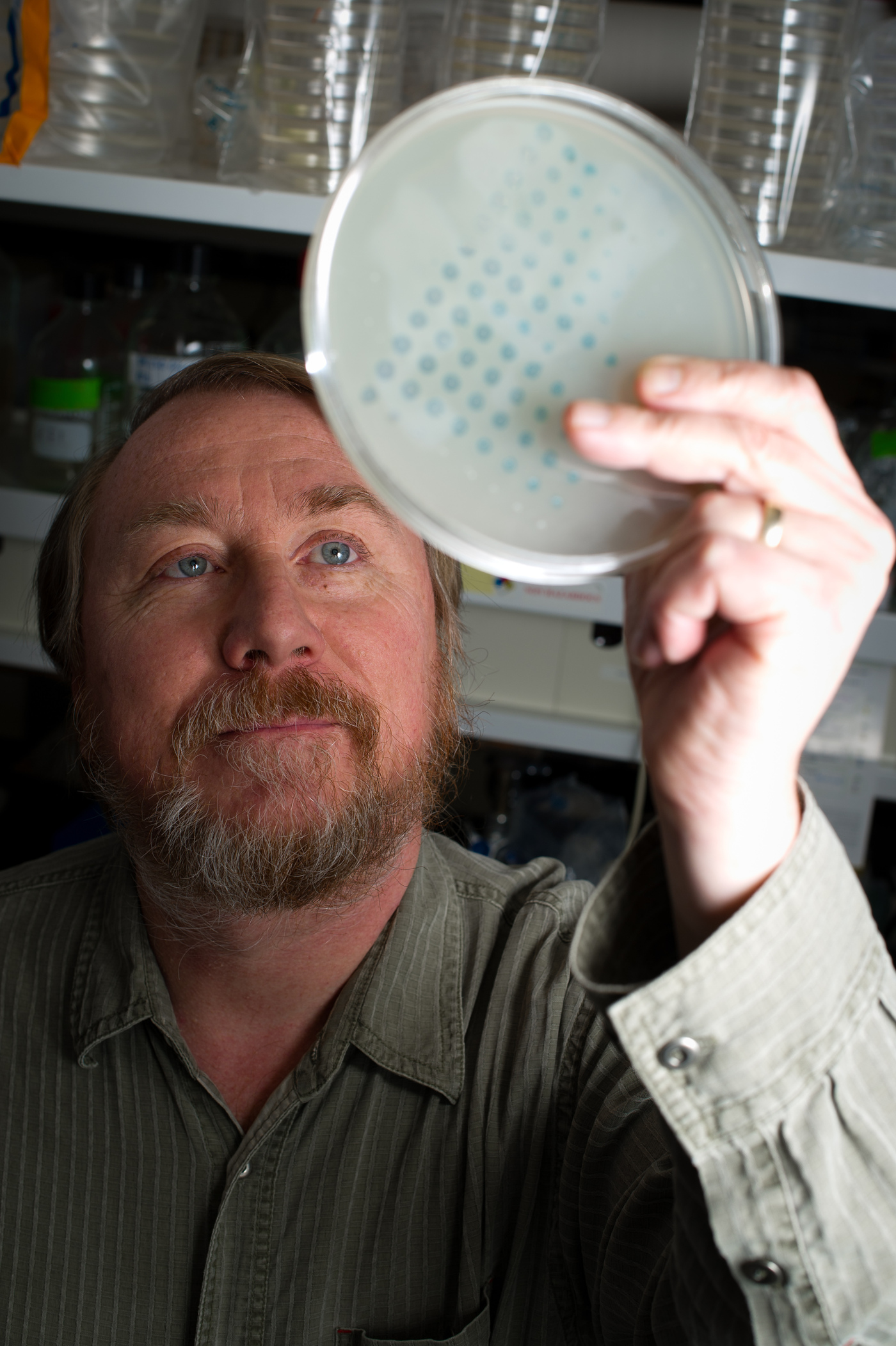 Richard Lenski examines the growth of bacteria on a plate on Jan. 12. He began an evolution experiment in 1988 with 12 identical flasks of bacteria to see if the populations would change over time in the same way.

"This was an experiment that was intended to be a long-term experiment, although I had no idea that it would be multiple decades," says Lenski, an evolutionary biologist. "It does just keep producing new and interesting results, so it doesn't seem to be near the end of its life span."

Every day, someone in his lab has to do the brief, tedious chore of feeding and caring for the bacteria. On day number 8,449, Lenski reached into an incubator and pulled out his old friends.

These E. coli bacteria reproduce so rapidly that, in one day, they speed through seven generations — creating the equivalent of their great-great-great-great grandchildren and letting Lenski watch their evolution in real time.

Lenski brought the flasks over to a lab bench and reached for his glasses. "When I started this experiment, I didn't need reading glasses," he notes, "and now looking at things close-up is always more work than it used to be."

For the first decade of his experiment, the bacteria in each flask mostly changed in similar ways. For example, they all were producing larger cells.

Then things got kind of boring for a while because the changes started coming more slowly. Lenski had other projects going on in his lab, and figured that maybe he'd learned all he could from this one.

"And so I was sort of thinking, 'OK, maybe it's time to stop the experiment,' " he says, recalling that he asked a few colleagues what they thought of that idea. "And they basically said, 'Nope, you can't stop it, it's gone on too long.' "

So he stuck with it. And a few years later, in 2003, something happened. The liquid in one flask looked strange. "This flask was considerably more cloudy," says Lenski. "I was suspicious that we had a contaminant."

It turns out that the bacteria in that one flask had actually changed in a dramatic way. After 30,000 generations, they had suddenly gained the ability to consume citrate, a chemical that had always been in the flasks — but that was never intended to be a food, since laboratory E. coli normally can't eat it.

What's more, Lenski was able to trace exactly how that new trait emerged. Over the years, he's been freezing samples of his bacteria, so he was able to go back and track every little genetic change that's taken place through the generations, using technologies that didn't even exist when he first started this study.

Lenski is now convinced that this study should keep going far into the future, to see what else might evolve. He'd like to see this experiment go on not just for 50,000 bacterial generations but 50,000 human generations, to "really get some very hard numbers on the process of evolution."

The fact that Lenski won't be around to see those hard numbers doesn't seem to bother him.

"My wife and I were very fortunate that one of our daughters had a baby about 20 months ago. And that really changes one's perception of time even more than a long-term experiment," Lenski says.

He notes that people tend to conflate the universe with their own existence, "but having children, grandchildren and so on ... you really just come to grips with the vast span of time that is available. And we only get to occupy a tiny portion of it."

Lenski, who is 56 years old, thinks he'll watch his bacteria for about another decade. Then he'll have to find someone to inherit this project. It's not a particularly expensive or difficult study — so he just needs to find someone younger who has a lab and is willing to carry his vision forward.

"They might be in their, you know, early- or mid-30s or something like that," Lenski says, "and then they can decide whether they want to do it for just the next five or 10 years or whether they want to continue it for another 30 years and perhaps pass it on to somebody who hasn't even been born yet."

Is it really possible to keep an experiment going like that? The answer is undoubtedly yes, as Lenski learned years ago when he heard of another long-term study happening on campus.

"Here I was, proud of myself for what was at that time maybe a 15-year experiment, discovering that it wasn't even the oldest experiment on campus — that there was another one up around 100 years, or even past that," recalls Lenski.

That experiment is currently cared for by Frank Telewski, who runs Michigan State University's botanical garden. The garden is named after botanist William J. Beal, and he started a long-term study on seed germination all the way back in 1879.

Beal was inspired by local farmers who had been asking him this question: If we weed our fields year after year, will we ever reach a point where the weeds just don't come back?

"Well, that was a very interesting question," says Telewski, because it wasn't at all clear how long seeds might remain viable in the soil. "We know that seeds can remain dormant for a long period of time, and Professor Beal's key question was, 'How long?' " 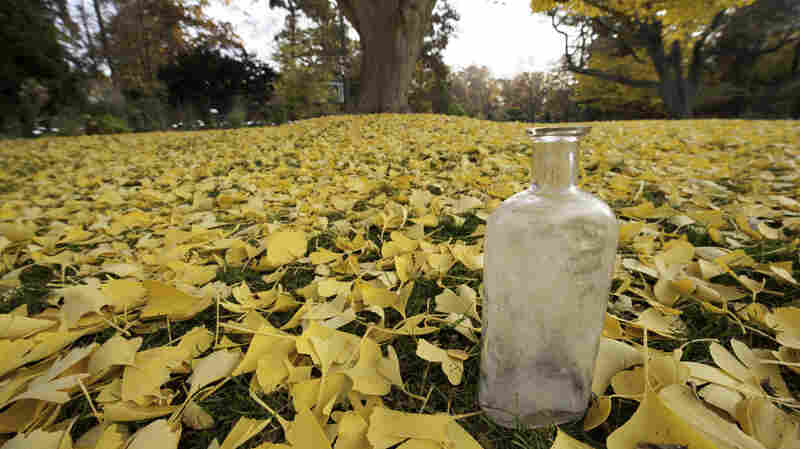 Bottles like this 90-year-old one were filled with seeds and sand, then buried by William Beal. Researchers periodically unearth a bottle and plant the seeds to see if they grow. Kurt Stepnitz/Michigan State University hide caption 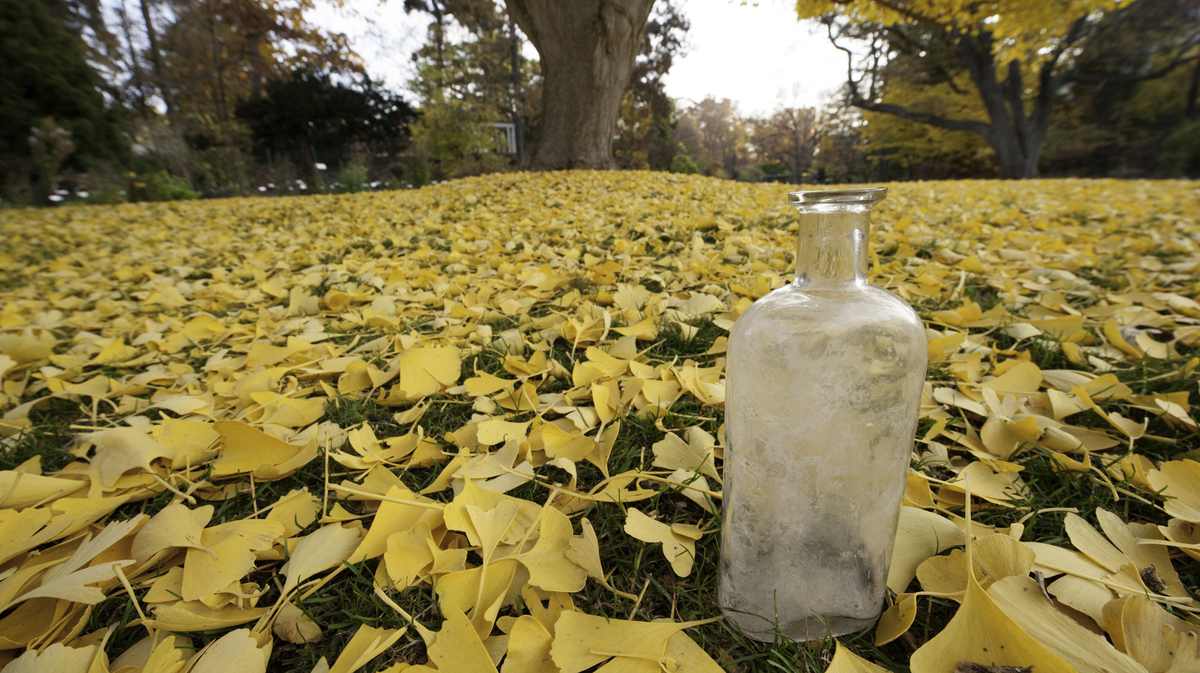 Bottles like this 90-year-old one were filled with seeds and sand, then buried by William Beal. Researchers periodically unearth a bottle and plant the seeds to see if they grow.

So Beal put a precise quantity of seeds from different species into 20 sand-filled bottles and stashed them underground. The original plan was to dig up one bottle every five years and see what would grow.

The only writings from Beal about his experiment are dry scientific reports, but Telewski assumes it meant a lot to him.

"He had to be passionate about it," says Telewski. "You don't do something like this, you know, with that long-term desire, without being passionate."

Beal opened six bottles before he retired. Then he passed it on to a colleague, Henry Darlington. Eventually it was taken over by others, including Robert Bandurski and Jan Zeevaart, who passed it on to Telewski.

The experiment has lasted longer than Beal ever intended because the caretakers extended it. They first decided to open a bottle only once every decade, and now, once every two decades.

Telewski dug up his first bottle 12 years ago. He did it at night, with a flashlight, trying not to draw any attention to the secret burial spot. He says it was exciting to think back and remember that the last person to see the seed was Beal, 120 years ago. "For me that holds a level of significance, that holds a level of fascination, charm," says Telewski.

And he says the mysteries of long-term seed viability remain scientifically interesting. Only two plant species sprouted from the last Beal bottle. Telewski can't wait to dig up the next bottle, in 2020.

Will that be the year that nothing germinates, wonders Telewski, or "will something that hasn't germinated in 30, 40 years all of a sudden appear?"

This kind of inherited experiment is unusual, says Telewski, but in another way, the whole of science is one big long-term effort. Every time researchers record a careful observation, or stash a specimen in a museum, they make it possible for some unknown person of the future to pick up where they left off.

"And isn't that wonderful that somebody, somewhere, thought forward enough to say, 'Let's hold onto this, let's keep this experiment going, let's design this experiment to go on and see where it takes us,' " says Telewski.

Telewski already has someone in mind to inherit the Beal study when he retires. "There's one particular person I've been speaking with, and I think she's going to be very excited to pick it up," he says.

If all goes as planned, he thinks the experiment will probably outlive her, too.

Some research studies don't yield quick results, and scientists design experiments that continue for years, if not decades. Below is a sampling of some long-term projects, many of which continue to this day. (Mouse over the bars for more information about each study.)