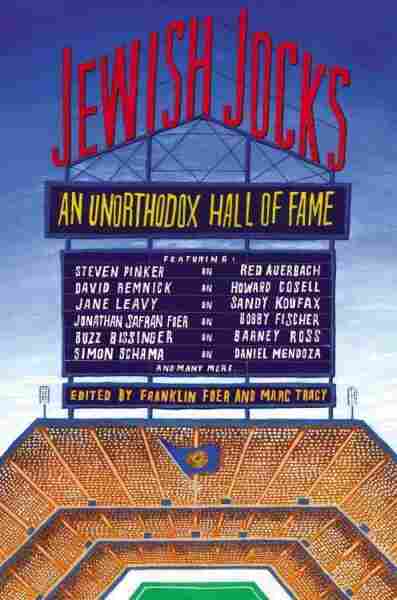 An Unorthodox Hall of Fame

by Franklin Foer and Marc Tracy

There have been a number of books about great Jewish athletes, starring legendary baseball players like Sandy Koufax or Hank Greenberg, the "Hebrew Hammer." But a new book doesn't focus only on Jewish players — it looks at the myriad ways Jews have contributed to the American athletic landscape. Jewish Jocks: An Unorthodox Hall of Fame is a collection of essays compiled and edited by Franklin Foer and Marc Tracy of The New Republic magazine.

Foer and Tracy join NPR's Linda Wertheimer to discuss the rise of Jews in big-league sports.

Foer: "We went out to our favorite writers, our favorite novelists and journalists and economists and historians and asked them to write about their favorite Jewish jocks. And it's really a portrait of Jewish life in this country, and more than that, it's a portrait of the history of sports and the very important role that Jews played in creating American sports."

Tracy: "We included people such as [sports journalist] Howard Cosell, who is certainly no one's idea of a jock, probably, but at the same time we considered to be a Jewish jock because he changed the way Americans view, in this case, football."

Foer: "[When] we're talking about the subject of Jews in sports, we're going to a very central place in the Jewish psyche. Jews over the ages resisted sports because sports were perceived as gentile activities. And then there was also this looming anti-Semitic caricature of the Jew — that the Jew was bookish, effeminate, wan, stuck in the ghetto and incapable of manly activity. And Zionism, when it arose, tried to rebut this anti-Semitic character head-on."

On the influence of Jews in basketball 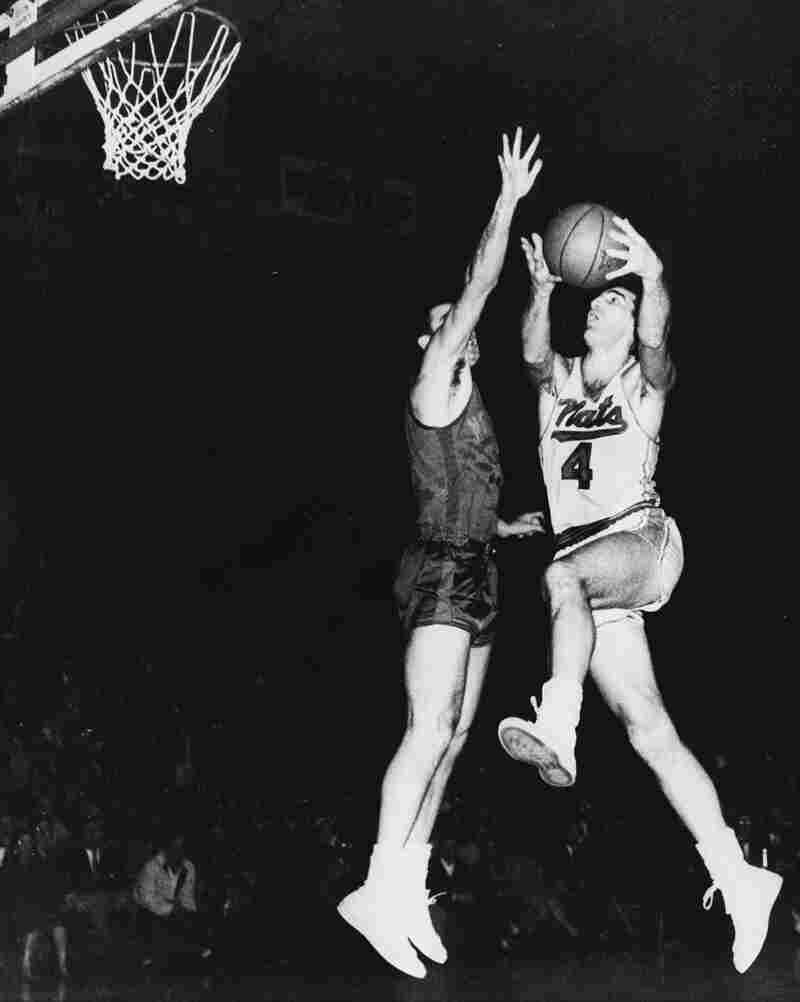 Dolph Schayes (right) of the Syracuse Nationals drives in to score in a March 1959 NBA playoff game. AP hide caption 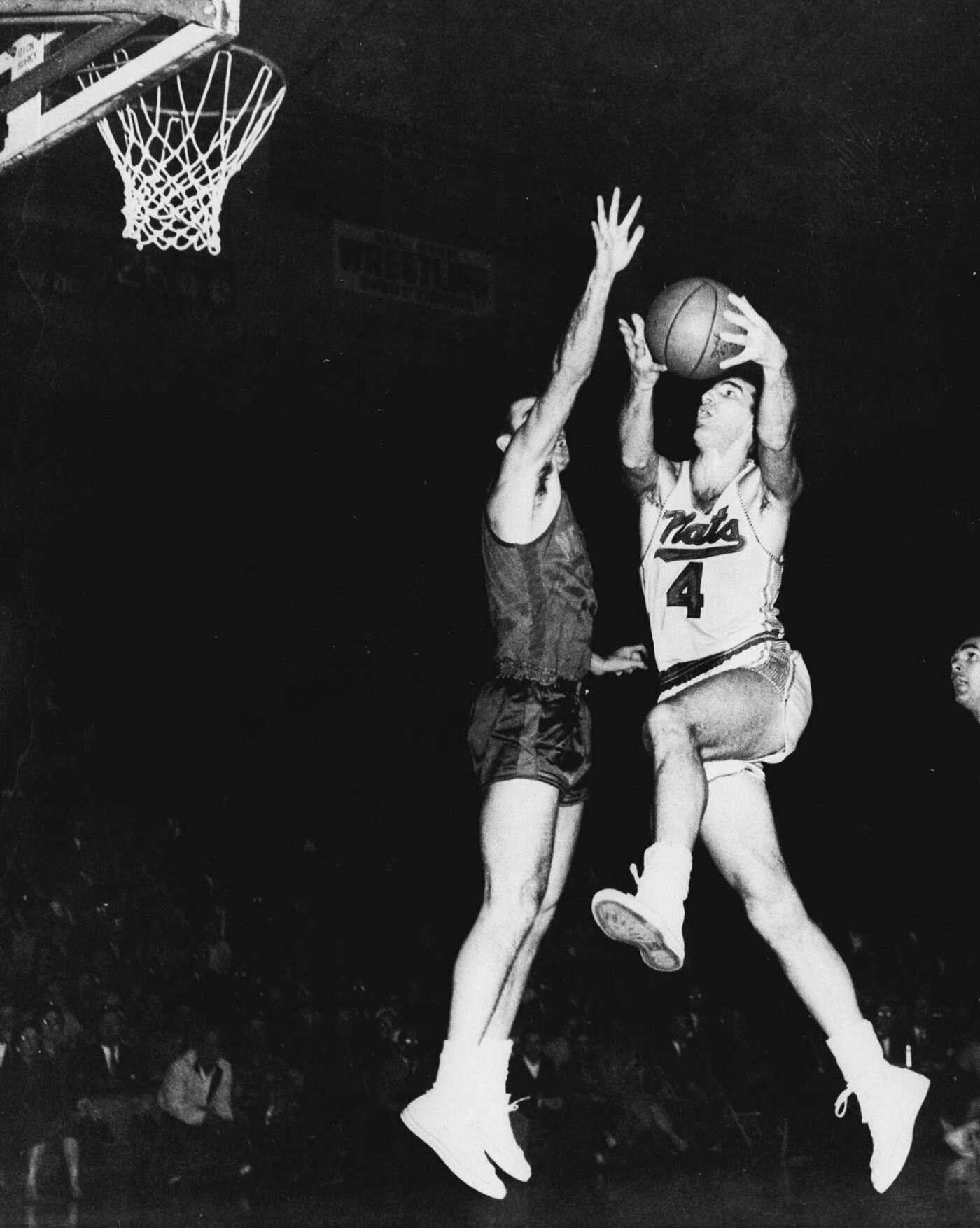 Dolph Schayes (right) of the Syracuse Nationals drives in to score in a March 1959 NBA playoff game.

Tracy: "Dolph Schayes is considered by Jew and non-Jew alike to be one of the ... all-time greatest basketball players. And he very much represented the culmination in Jewish participation in basketball as far as being on the court was concerned. Because he was a rookie in 1948. He grew up, you know, in the Bronx, and, as he put it to me, in the Bronx in the 1930s and 1940s, there were a lot of Jews. They all played basketball because it was the sport of urban spaces — you didn't need too many resources. Everyone played basketball. And he was a great basketball player. And what you sort of see happen is something developed in New York City, especially among the Jews, called the City Game. The City Game, you know, its locus was City College, which was coached by a guy named Nat Holman. One of Nat Holman's players was a guy named Red Holzman.

"Red Holzman [was] ... an absolute all-time coach. Won two championships for the New York Knicks, the only two New York Knicks championships in history, and probably for the remainder of history. And the City Game, which Red Holzman really brought to full fruition with these Knicks, involves passing and moving without the ball and backdoor cuts, because that was the only way to beat more physically endowed teams. And that actually turned out to be a better way to play basketball, and it turned out to be the way that everyone plays basketball to this day. So one of Red Holzman's players for the New York Knicks who imbibed the City Game was Phil Jackson, who created his, you know, pass-happy triangle offense — and Michael Jordan and Kobe Bryant did a few things with that."

On Benny Leonard, the Jewish boxer who wasn't afraid to say he loved his mother 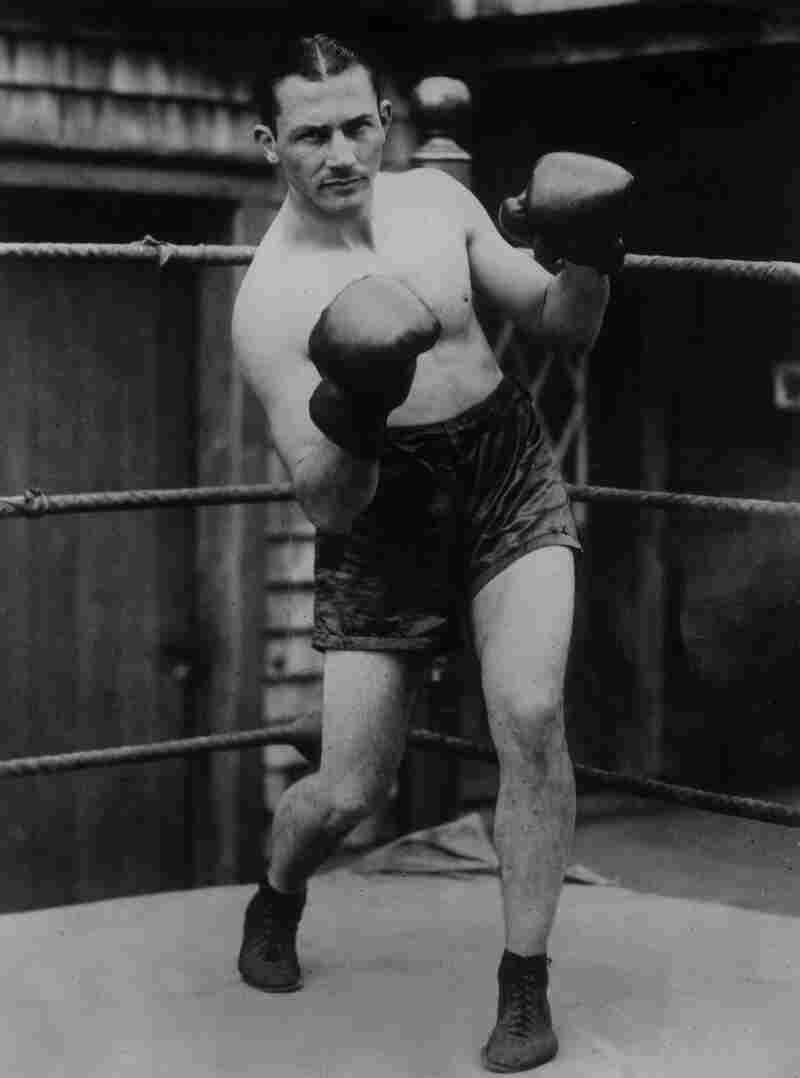 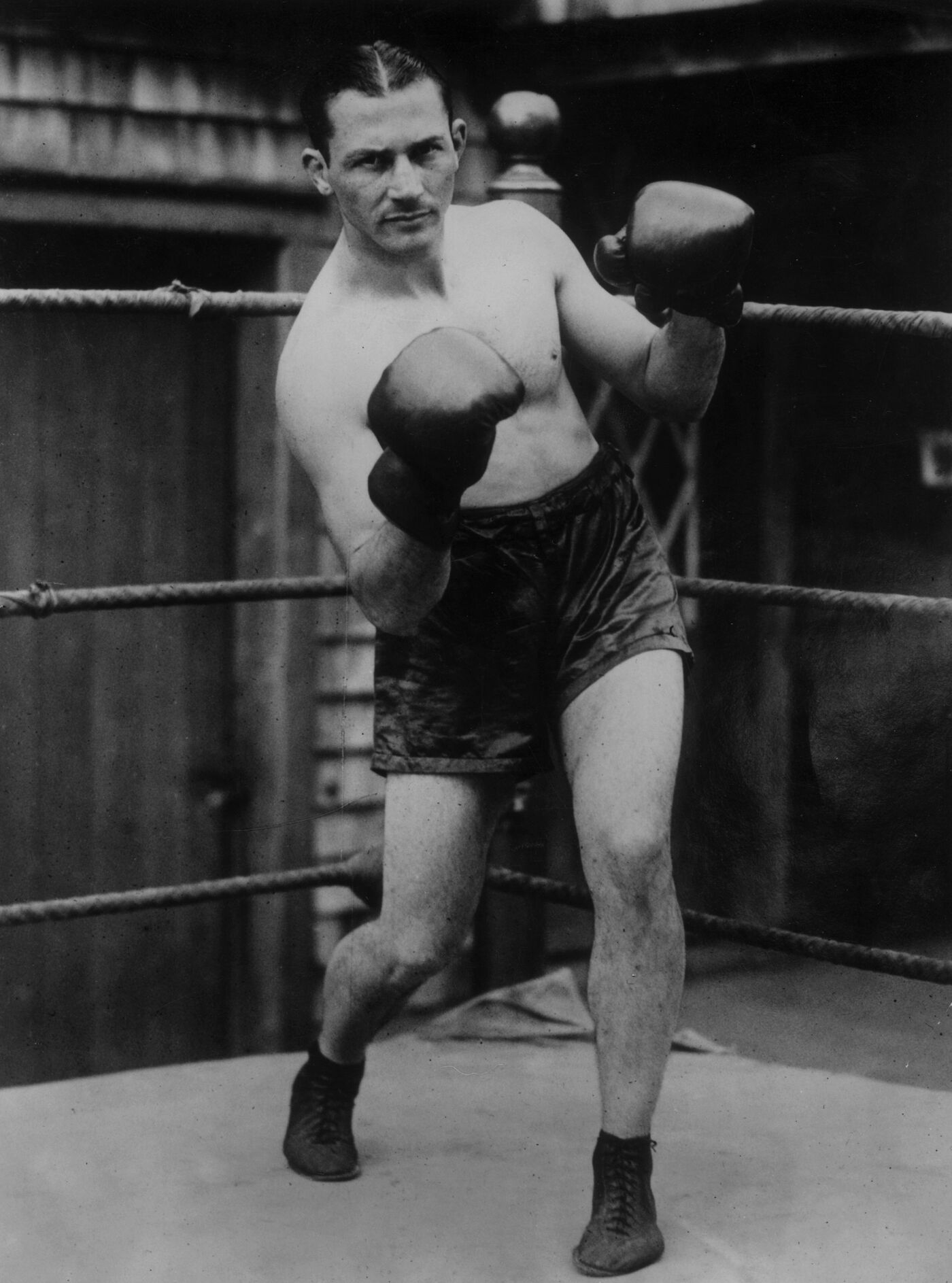 American lightweight Benny Leonard, pictured in 1925, is remembered as one of boxing's greatest.

Foer: "Benny Leonard is rated by most boxing historians as one of the top 10 greatest. He became champion in 1917, and he remained champion until 1925, and he just dominated the sport. And, in fact, in the interwar years, one-third of all the boxing champions in this country were Jewish. And the boxers that we produced actually transformed the game. And Benny Leonard certainly transformed the sport of boxing with his methodology. He was an extremely slippery boxer. He was extraordinary at using feints and counterpunching and assessing the strategic weaknesses of his opponents. And Jews, across all matters of sports, are usually pegged as the 'scientific boxer' or the 'scientific hitter,' which is another way of imposing a stereotype on the Jewish athlete that could be perceived as extremely flattering or as demeaning. Henry Ford, a notorious anti-Semite, thought that the way that Benny Leonard boxed, with all of his feints and all of his trickery, was fundamentally unmanly.

On Don Lerman, a founding father of competitive eating 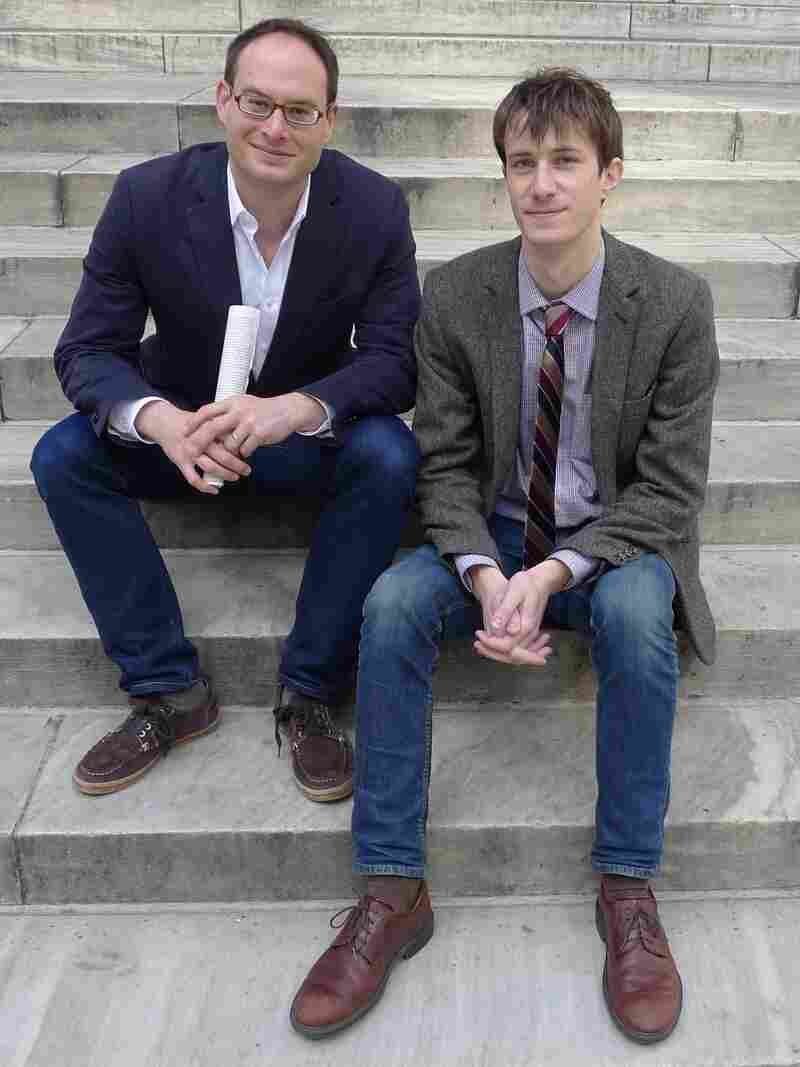 Franklin Foer (left) is the editor of The New Republic, where Marc Tracy (right) is a staff writer. Len Small/Twelve hide caption 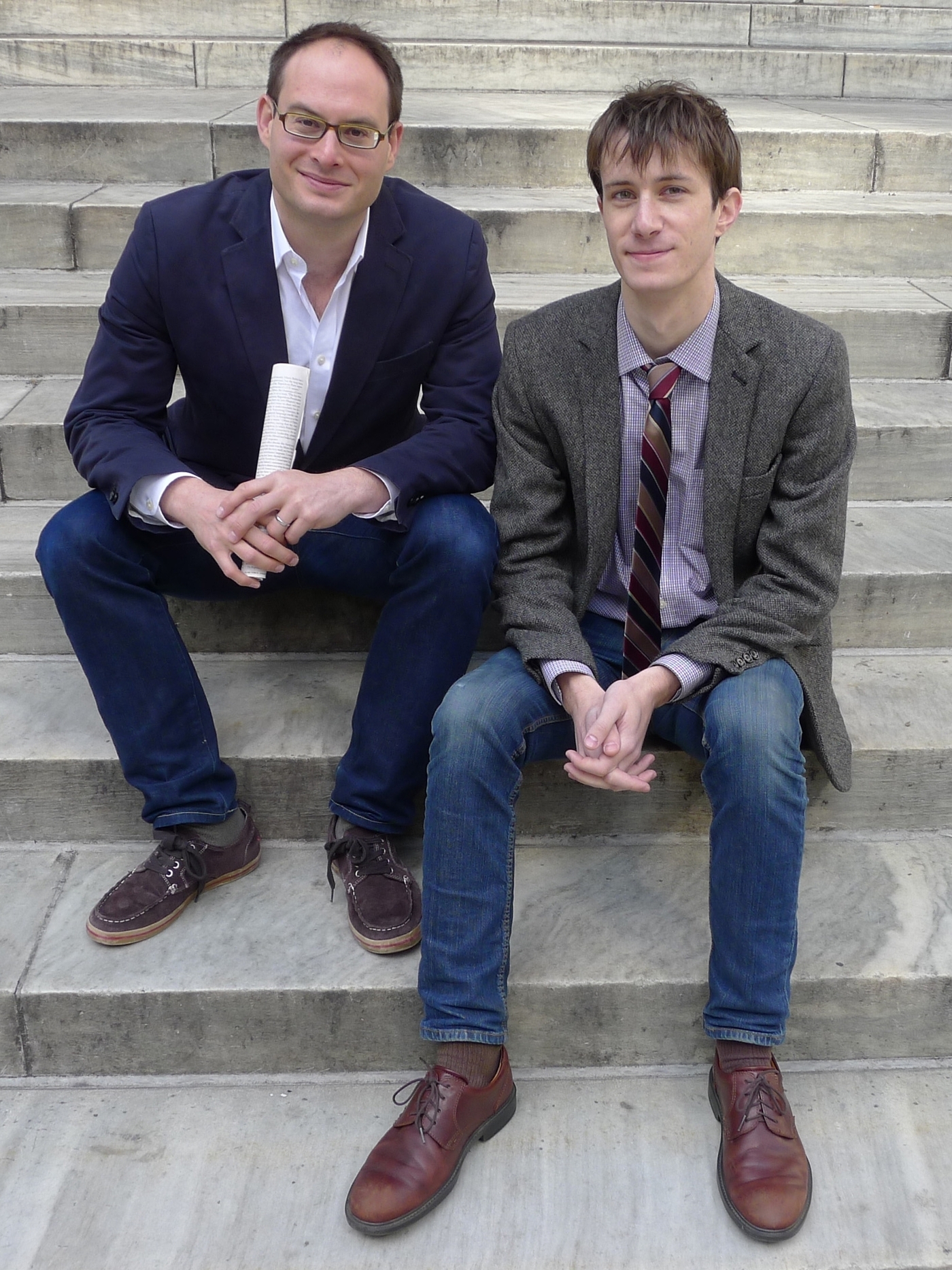 Franklin Foer (left) is the editor of The New Republic, where Marc Tracy (right) is a staff writer.

Tracy: "You know, people might be familiar with the Coney Island hot dog contest and the whole competitive eating thing, which has really taken off in the past 10 or 12 years. And the reason it's only taken off ... is because of Don Lerman. Don Lerman was the one who, more than anyone else, figured out how to make it a sport. This is a guy who, you know, was a businessman. He sold day-old bread to supermarkets — made a fortune, retired, and then really [decided] just as a lark that he was going to do competitive eating. And what he quickly noticed is that whereas everyone else was just trying to eat as much ice cream or jalapenos or whatever as you can, he turned it into an almost mechanized sport. He would, you know, take the butter — 'cause butter-eating is one sort of competitive eating — and he would give each butter — take a chomp, quarter-turn, chomp, quarter-turn, chomp, quarter-turn. ... And it's very apparent that he's treating it as a science. You know, it's not what you think of as a typical sport, but Don Lerman attacked it with all of the rigor and all the intensity that the true athlete brings to his craft."

Read an excerpt of Jewish Jocks