Accessibility links
Sierra Leone's Diamonds Still A Source Of Contention Blood diamonds, as they were once known, helped fuel atrocities in both Sierra Leone and neighboring Liberia. While no longer termed "conflict diamonds," they remain a divisive issue for the small West African nation. 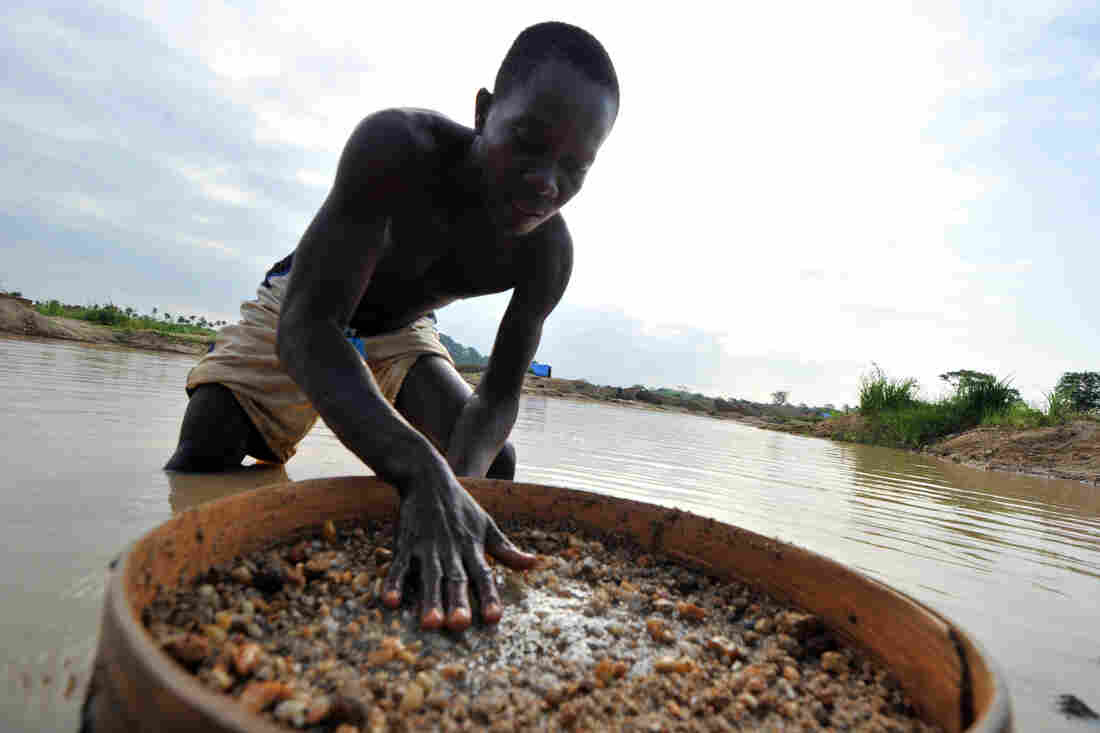 A diamond prospector filters earth from a river in Koidu, the capital of diamond-rich Kono district in eastern Sierra Leone. Koidu suffered some of the worst ravages of Sierra Leone's war in the 1990s as rebels forced citizens to mine at gunpoint. Ten years after the conflict, diamonds remain a contentious issue. Issouf Sanogo/AFP/Getty Images hide caption

Sierra Leone's "blood diamonds" helped fuel atrocities in the impoverished West African nation in the 1990s. The war has now been over for a decade, and the country's most valuable resource is no longer known as the product of a conflict. But it remains a contentious issue.

Voters in Sierra Leone went to the polls on Nov. 17 to pick a president and the parliament, and the country's diamonds were a central issue. Opposition parties accused the government of mortgaging lucrative diamond fields for a "pittance," while President Ernest Bai Koroma boasted of his "ambitious" efforts to transform the industry.

As of Friday, there were still no results in what was seen as a tightly contested election. The BBC reported that about 10 percent of the votes had been set aside because of alleged fraud. It was not clear when the results would be announced.

The diamond-mining Kono district, in the eastern part of the country, reflected the country's bitter irony: It's resource rich, but poverty abounds as development has not kept pace with other parts of the country.

In Koidu, the capital of Kono, women and children stand knee deep in the fields on either side of the dusty potholed roads. 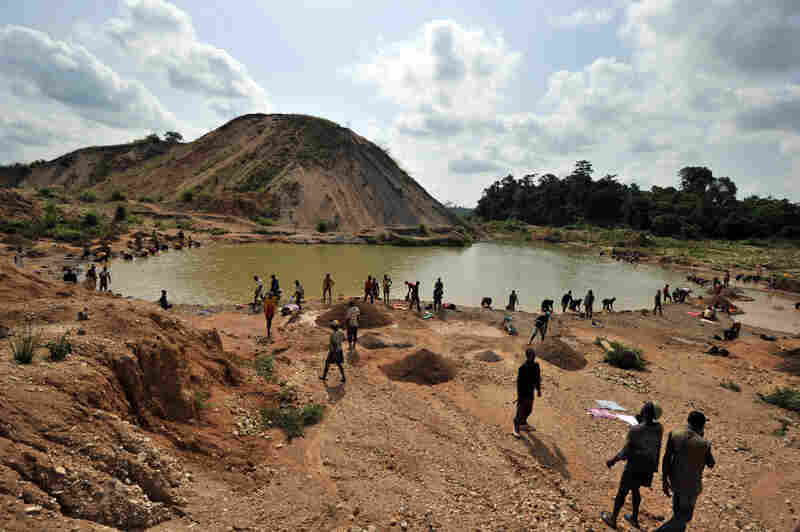 Small-scale artisanal mining has sustained this area since diamonds were discovered in 1930, but it is hard work and the pay is low. Issouf Sanogo/AFP/Getty Images hide caption 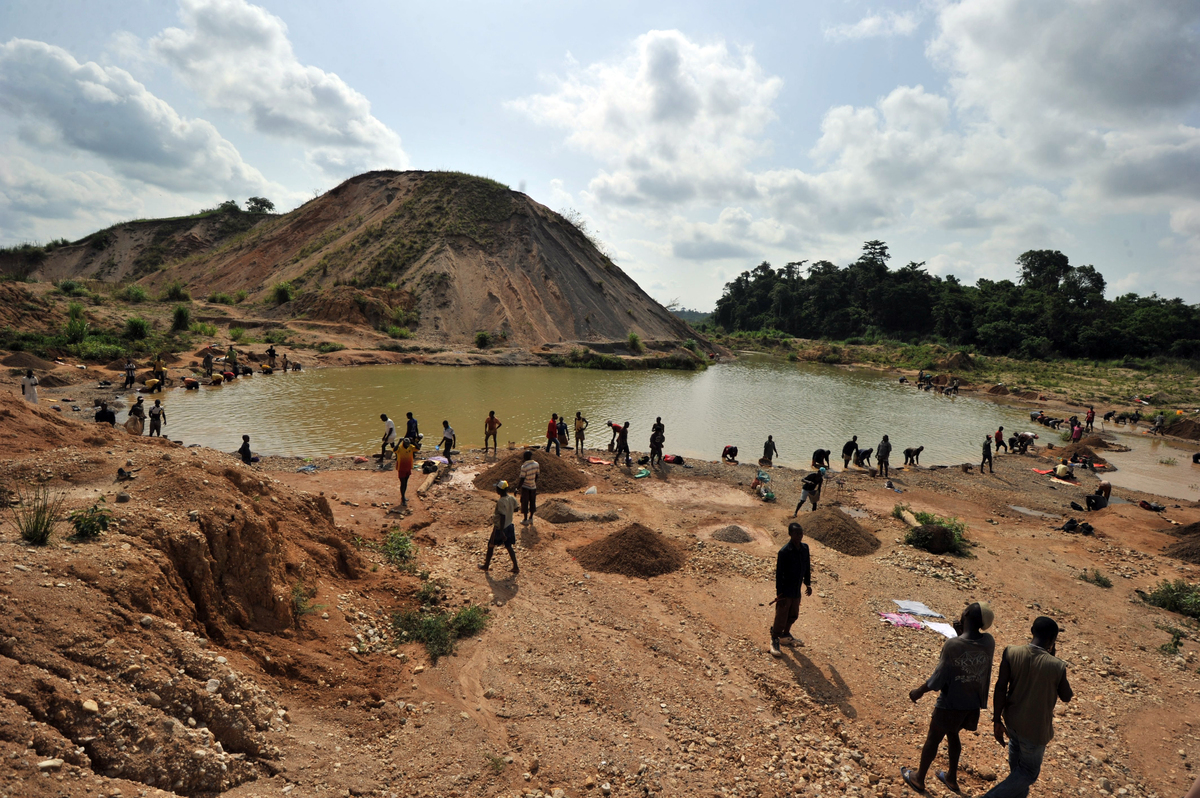 Small-scale artisanal mining has sustained this area since diamonds were discovered in 1930, but it is hard work and the pay is low.

Mounds of dug-up dirt dot the landscape around them.

With stooped backs, their eyes are down, scanning the huge sieves in their hands as they hope to spot the unmistakable sparkling of a diamond in the muddy water.

One of the miners gets lucky. He pulls a diamond the size of a grain of rice from the river, dirty and barely recognizable from the multifaceted stones that sparkle in jewelry store cases.

"When you put it in the water it can shine," he says.

It's a good thing, but it won't make him rich.

Koidu is the heartland of diamond mining in West Africa — two of the world's biggest diamonds were found here — but it was also home to some of the worst fighting on the continent. During the decade-long conflict that ended in 2002, rebel factions fought for control of the diamonds.

War And Violence On The Decline In Modern Times

But since 2003, after signing on to a regulatory scheme to stop the flow of conflict diamonds, the Sierra Leone diamond trade has come to be seen as legitimate and is part of the government's pitch to attract foreign investment.

Ten years after the war ended, there is peace in Sierra Leone. But the scars are still visible here in Koidu — no roads, electricity only for those who can afford generators, and little or no running water.

"It's not easy. It's difficult because I have my children, I have my wife, and I don't have any money to give them," says 35-year-old Mohamed Challey.

Challey gets paid 1,000 leones every morning — about 25 cents — plus one meal a day. If he finds a diamond, he has to sell it to his boss, and then he gets half.

"We need more help because things are very hard for us here," Challey says. "There are no jobs. My father is here. My mother is here. I don't have any money to give them unless I do mining."

Despite its natural resources, Sierra Leone is one of the poorest countries in the world. With a growing youth population and massive unemployment, the U.N. estimates two-thirds of the population live on less than $1.25 a day.

For thousands of people like Challey, who has little education, digging and sifting through the dirt searching for diamonds is the only way out of poverty.

But with almost no regulations for the small-scale mining industry, both the people and the diamonds are left open to exploitation, says Lesley Nmboka of the National Chairman of the Campaign for Just Mining.

"You know it's actually the people who have money that will normally pay a pittance to the locals to do all the dirty jobs for them to go tracing or looking for the diamonds," says Nmboka. "You can still see poverty bravely rearing its ugly head in these communities."

There are new roads and electricity in the major cities. But the challenge of transforming the country's natural resources into development for its people still remains.