Accessibility links
Just Another Day In Damascus If one word could describe everyday life for Syrians in the country's capital, it is "waiting": waiting to learn who has died, or to replace a bomb-shattered window, or to pass through a checkpoint. There's menace and dread, too, of thuggish militiamen and the unrelenting bombings and shellings.

Just Another Day In Damascus

Just Another Day In Damascus 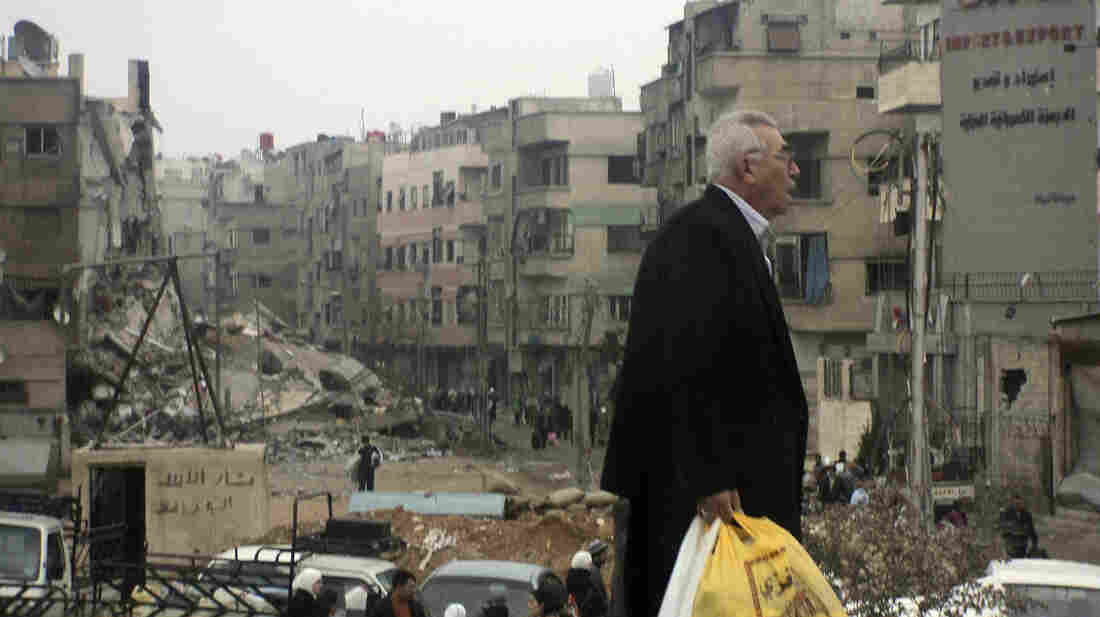 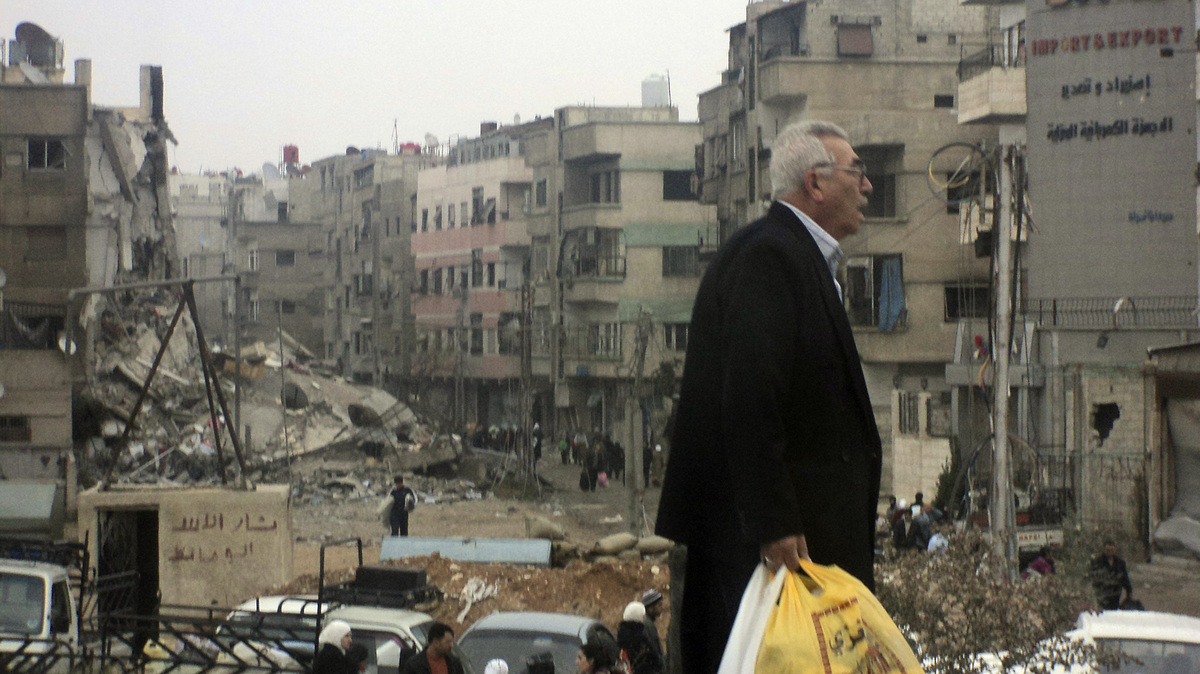 A man walks near buildings damaged after shelling by forces loyal to Syria's President Bashar Assad, at Harasta, a suburb of Damascus, on Nov. 19.

Editor's Note: Throughout the Syrian uprising, the government has allowed few foreign journalists and other outsiders into the country, and there has been limited information about life in many parts of the country. In this essay, a Syrian citizen describes life in the capital, Damascus. For security reasons, NPR is not identifying the author.

It was barely dawn, just a short while after the morning call to prayer, when a jet roared overhead and bombarded the outskirts of Damascus. I was still in bed, my cat Gremlin nestled on my arm. The booming sound invoked the image of a gigantic sledgehammer smashing the ground. Sometimes, the bombs have a strange aftersound, as if a truck is being dragged on a metallic surface.

The Syrian government has been using a variety of ammunition, each with a distinctive soundtrack. Many Syrians, including children, knew nothing about the weapons of war before the Syrian uprising began in the spring of 2011. Now they differentiate them by sound alone.

That morning, I also heard the familiar thumping of shells fired from government tanks. They sit perched on Mount Qasioun, the series of hills that surround the capital, and fire at rebel strongholds in the neighborhoods below.

The worst part of that morning wasn't the thunder from the battle unfolding about a 40-minute drive from my home. Rather, it was the knowledge that most every time I heard an explosion, civilians were likely killed or maimed. Or that a home was destroyed, or a livelihood lost.

A Degree Or Two From The Dead

On previous days, I had heard shelling and bombs much closer to my home. On those days, fear pierced my heart.

But this morning, all I felt was dread for what I knew was coming: the names of the dead. 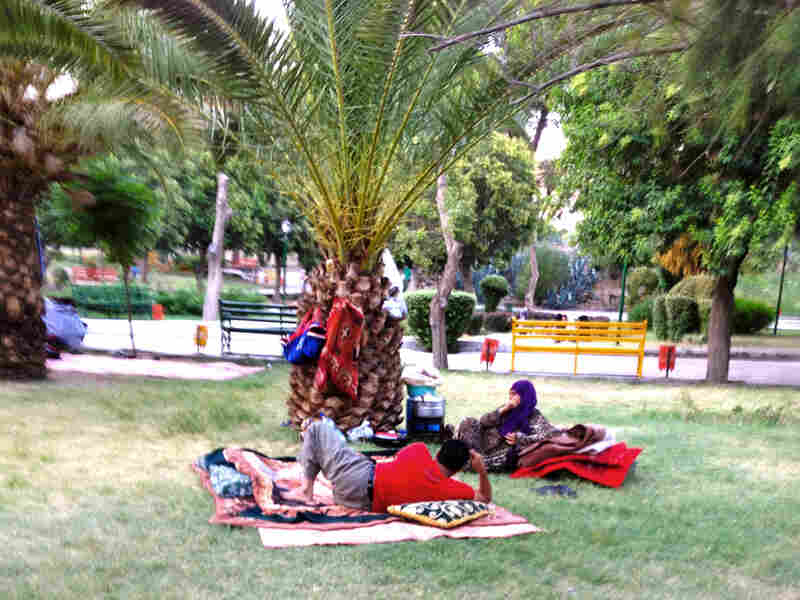 Syrians whose homes have been destroyed by recent shelling sleep in a Damascus park. Courtesy hide caption 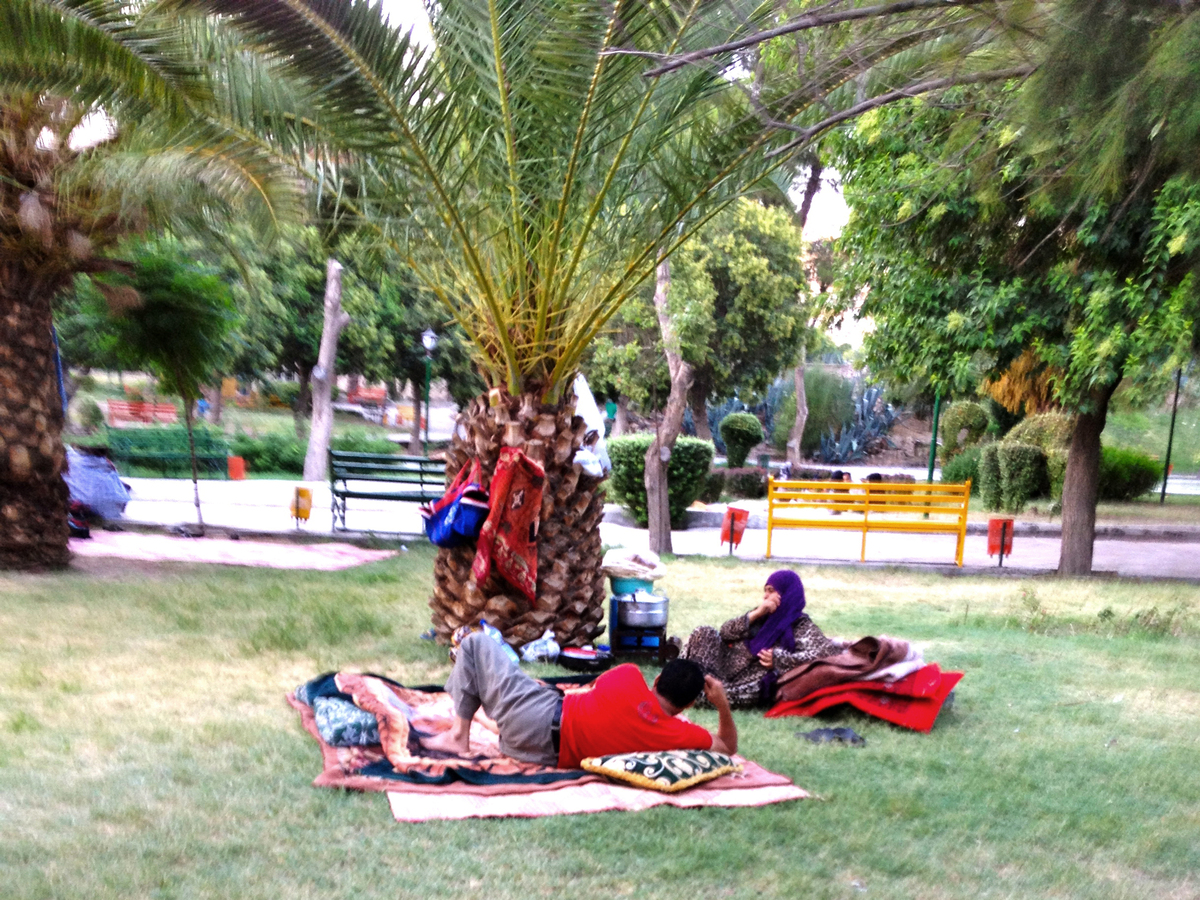 Syrians whose homes have been destroyed by recent shelling sleep in a Damascus park.

A few hours later, I learned that a kind man I knew briefly was among those killed. He once helped me with travel documents for Gremlin, my cat, in case I had to evacuate her. He lost his life driving to work on Oct. 8 during shelling in the outskirts of Damascus. He left behind a large family that must now fend for itself.

As a Syrian, I'm just a degree or two separated from the dead these days. The dead may be the husband of a friend, or the child of an acquaintance. Every day, I hear about the tragic death of someone who is linked to someone I know.

Thousands of Syrians have voluntarily left their homes, my own relatives and friends among them. They now live everywhere from Dubai, in the United Arab Emirates, to Texas. Some vow never to return. Others lead what they call temporary lives, with rented furniture and no jobs, waiting to see what happens next.

Also waiting are the millions of Syrians who are now sheltering in refugee camps in surrounding countries, like Turkey and Jordan, where they are bracing for a harsh, wet winter.

If one word could describe everyday life for Syrians, it is "waiting."

Waiting to learn who was killed today. Waiting before replacing shattered glass in the bedroom, in case another bomb shatters it. Waiting in a public park for food and shelter, after an explosion destroys a home.

Facing The Awful Unknown Every Day

Waiting at checkpoints, which have turned the city into a labyrinth of roadblocks and detours. It's there that ordinary Syrians interact with the authorities several times during the average commute, and you never know what the experience will bring.

The most frightening encounter I've had occurred at a checkpoint beneath an overpass, where my car was the only one around.

A half-dozen armed shabiha, or paramilitary fighters who support the government, gawked and glared at me and my two companions. Tall and muscular, and with visible tattoos of President Bashar Assad, they approached us at a deliberate pace.

Without warning, one pushed himself halfway inside our car through the passenger seat window and searched the glove compartment. Syrians speak of terrible things that can happen at checkpoints, like random detention and kidnappings. 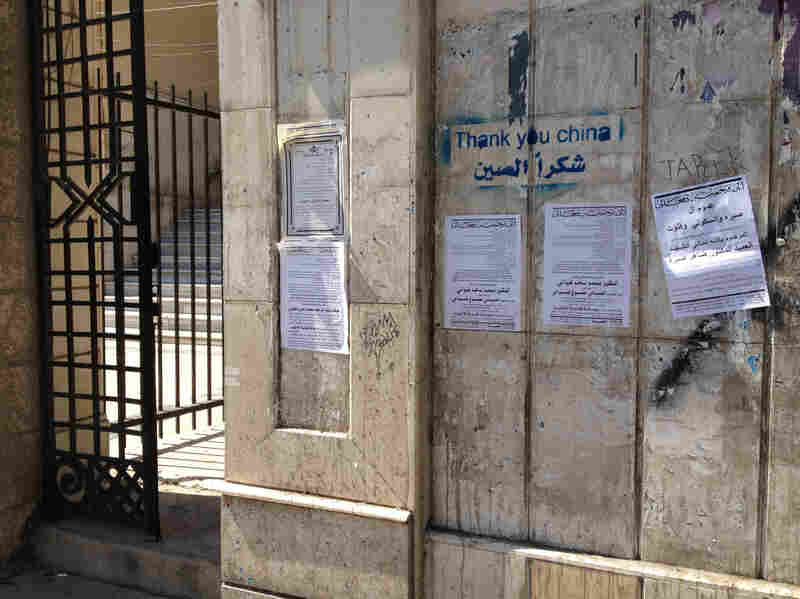 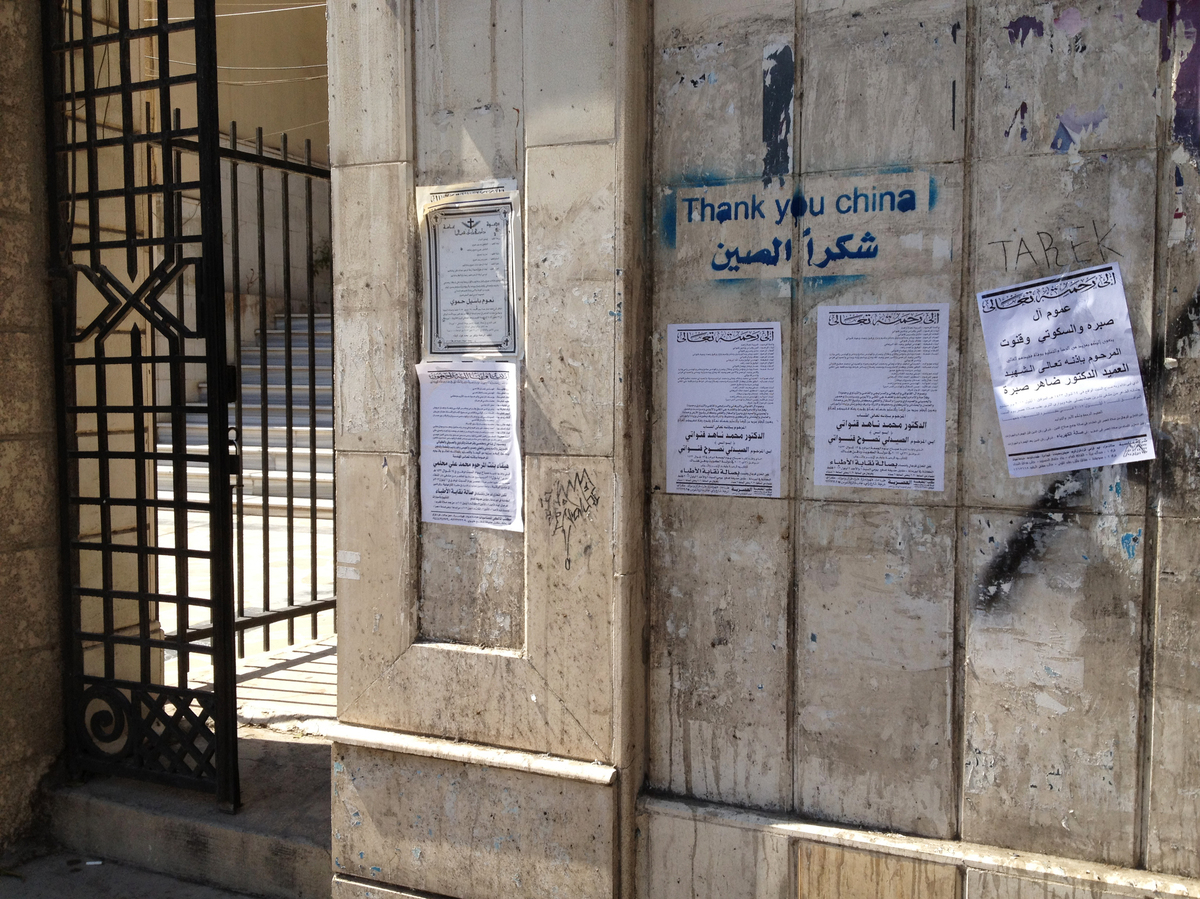 Death notices hang on a wall alongside pro-regime graffiti in central Damascus.

But this time, after those few menacing moments, the shabiha waved us through.

Another day, as I drove to the outskirts of the city to visit relatives, I encountered Syrian government soldiers who had a very different attitude. Thin-bodied and baby-faced, the conscripts tend to come from the countryside, and many are away from home for the first time.

They called me "sister" and smiled, greeting me the way they might address a stranger who passes through their home village.

"May God protect you," one told me, pointing out that it was getting dark soon. He waved me through.

At the next checkpoint, not knowing what to expect, I waited 25 minutes for my turn. I noticed the driver in the car ahead of me give the armed guard a couple of CDs before being waved on.

When I pulled up, the same soldier briefly glanced through my car.

Then he surprised me.

"Sister, do you like to listen to music?" he asked, trying to crack a smile.

"Yes," I answered, not quite sure what to think.

"Here you go. Take these," he said, and handed me the CDs he had just received.

I then drove home, nervous that it was already dark, and aware of the shelling and fighter jets that I could hear in the neighboring suburb.

I slipped one of the CDs into the car stereo, and soon found myself singing along to the folk songs that played.

Just another day in Damascus.