Accessibility links
An Arbor Embolism? Why Trees Die In Drought Scientists who study forests say they've discovered something disturbing about the way prolonged drought affects trees. When drought dries out the soil, a tree has to suck harder to draw in water. But that increases the risk of drawing in dangerous and deadly air bubbles. 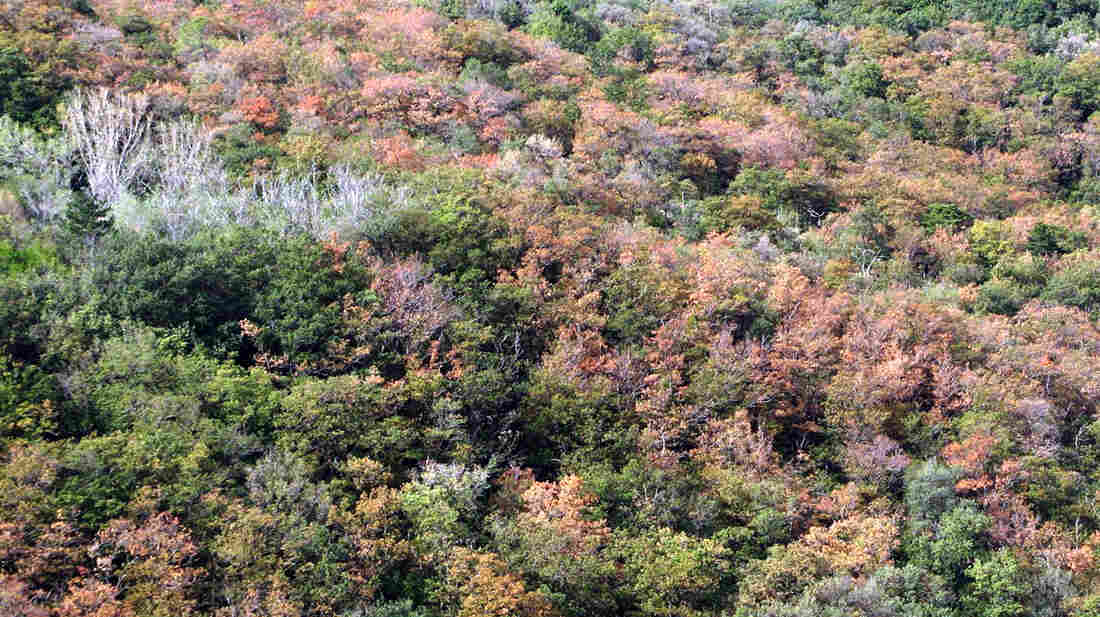 A forest near Trieste, Italy, is largely dead owing to drought stress during the summer of 2012. Andrea Nardini/Nature hide caption

It has to do with the way trees drink. They don't do it the way we do — they suck water up from the ground all the way to their leaves, through a bundle of channels in a part of the trunk called the xylem. The bundles are like blood vessels.

When drought dries out the soil, a tree has to suck harder. And that can actually be dangerous, because sucking harder increases the risk of drawing air bubbles into the tree's plumbing. 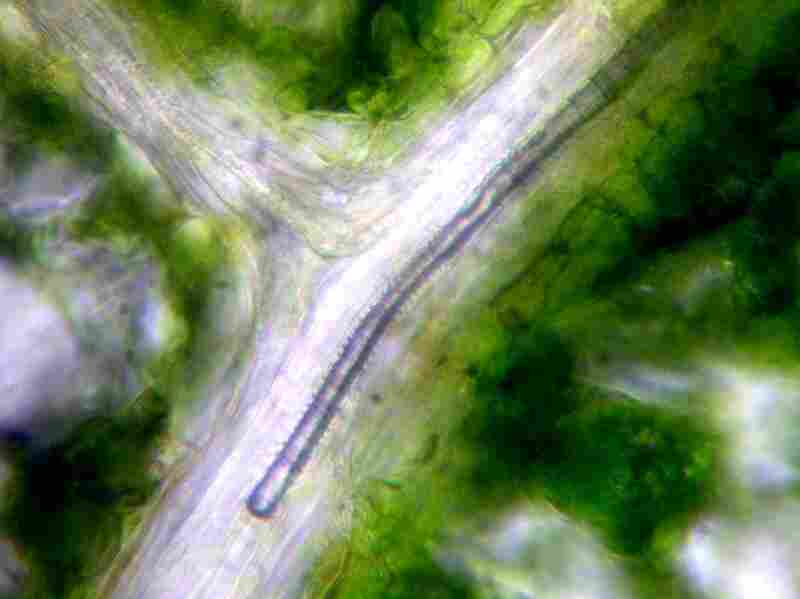 An air embolism in a narrow water-transporting cell in a leaf of a walnut tree, captured using light microscopy. Drought stress increases the likelihood of embolism, reduces photosynthesis and may eventually lead to plant death. Herve Cochard/Nature hide caption 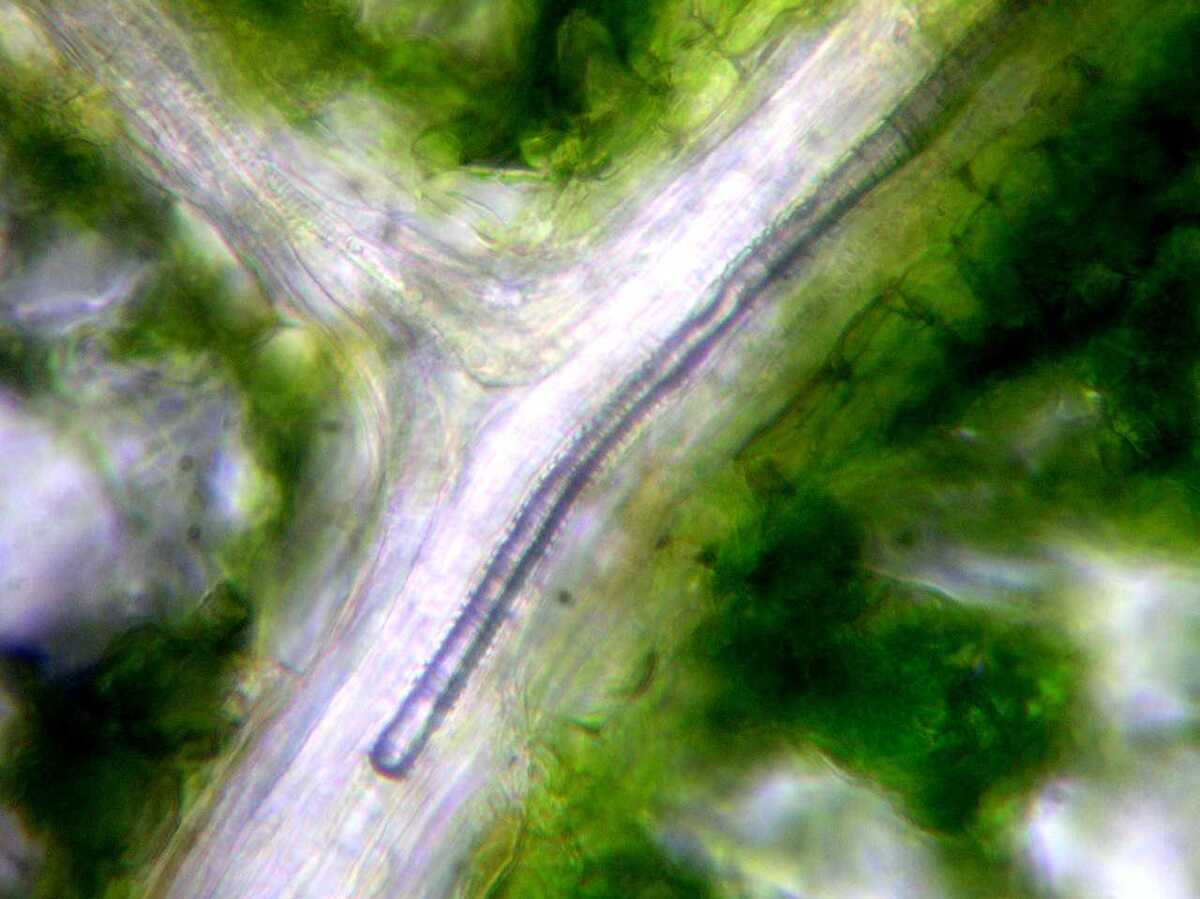 An air embolism in a narrow water-transporting cell in a leaf of a walnut tree, captured using light microscopy. Drought stress increases the likelihood of embolism, reduces photosynthesis and may eventually lead to plant death.

Plant scientist Brendan Choat explains: "As drought stress increases, you have more and more gas accumulating in the plumbing system, until they can't get any water up into the leaves. This is really bad news for the plant because this is like having an embolism in a human blood vessel."

Like a human embolism, the gas bubbles stop the flow of fluid. If that persists, it means thirst, starvation and eventually death.

Choat is from the University of Western Sydney in Australia, a region that has seen years of record-breaking drought. He wondered: How much drought does it take before trees start choking on air bubbles?

He and a team of researchers studied 226 species of trees around the world, including desert trees, rain forest trees and many others. They discovered that for most, it doesn't take much drought at all.

"So this is the key thing," Choat says, "that it would only take a small shift in terms of the moisture environment, the temperature ... to push these plants across the threshold."

The threshold between drinking and choking, that is. The reason there's so little margin of error is that trees have to finely balance eating and drinking. To eat, they open holes in their leaves, called stomata, to absorb carbon dioxide. But the more they do that, the more they lose water by transpiration through the stomata. Lose too much, and they have to start sucking harder — and risk a deadly embolism.

Choat's research, in the journal Nature, shows that it doesn't take much drought before trees start to self-destruct.

But what about trees that have evolved to live in really hot, dry places? They're sippers, not gulpers.

Plant scientists like Bettina Engelbrecht figured they'd have a larger margin of safety before they choke. "Instead," she says of Choat's research, "we find, well, it's all the same — everyone is right at the edge and has a very risky strategy."

Engelbrecht, at the University of Bayreuth in Germany, studies rain forest trees. "Now, we have to worry about all of them," she says. "We have to really deal with the problem at the global scale." That's because temperatures are rising around the globe. That makes drought more likely and more intense. Big droughts have hit southern Europe, Russia, Australia and the U.S. in recent years.

The first 10 months of 2012 were the warmest ever in the continental U.S. Along with the heat came widespread drought, which still persists in the Southwest.

Nathan McDowell, a plant scientist at the government's Los Alamos National Laboratory in New Mexico, actually puts trees under plastic to see how they deal with less water and more heat. He says trees are adaptable, up to a point.

"Now we're changing that climate range really fast," he notes, "faster than any of the living plants here have experienced. So can they change fast enough to adapt to that? You know, the preponderance of evidence right now is saying that [at] lots of locations around the world, they're not adapting fast enough."

When they don't adapt, they stop growing. Beetles and other insects invade. If droughts last long enough, the forests just die, and get replaced with something else.