Accessibility links
What Happened To 'Baby Jane'? She's Turning 50 On its 50th anniversary, Robert Aldrich's classic horror film What Ever Happened to Baby Jane? has just been released on Blu-ray. Though it's far from a musical, classical music critic Lloyd Schwartz says its musical elements are crucial to the film. 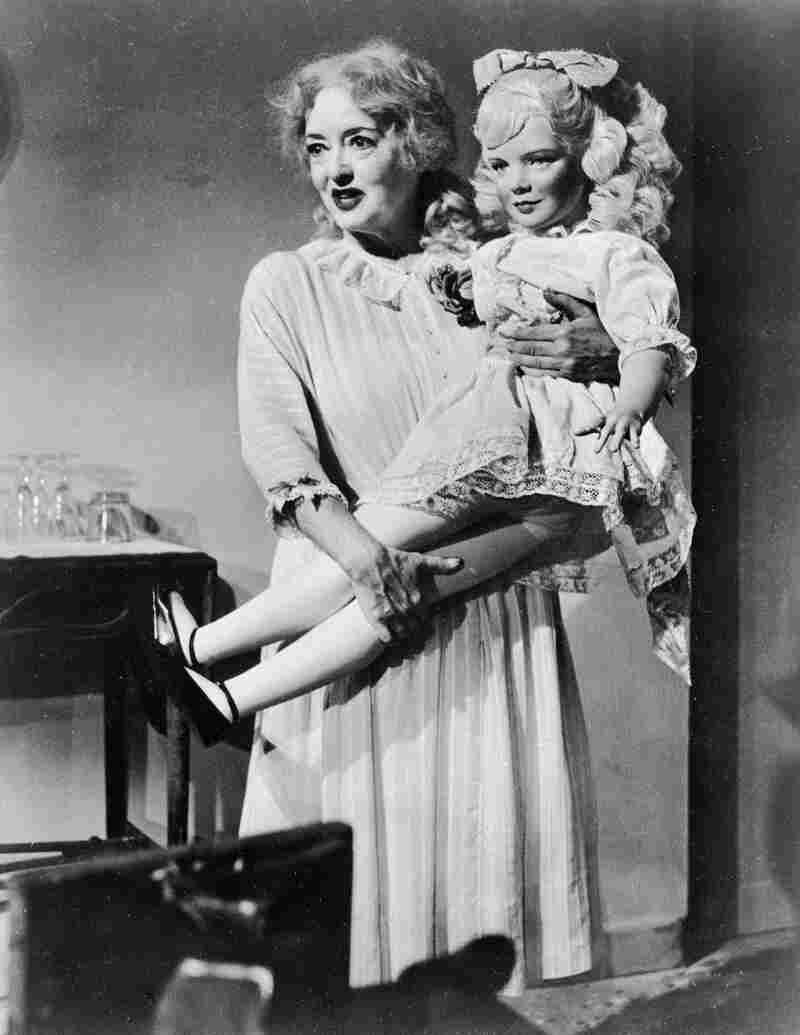 Bette Davis in the role of Jane Hudson in What Ever Happened To Baby Jane? The classic horror film, which has just turned 50, is being released on Blu-ray AP hide caption 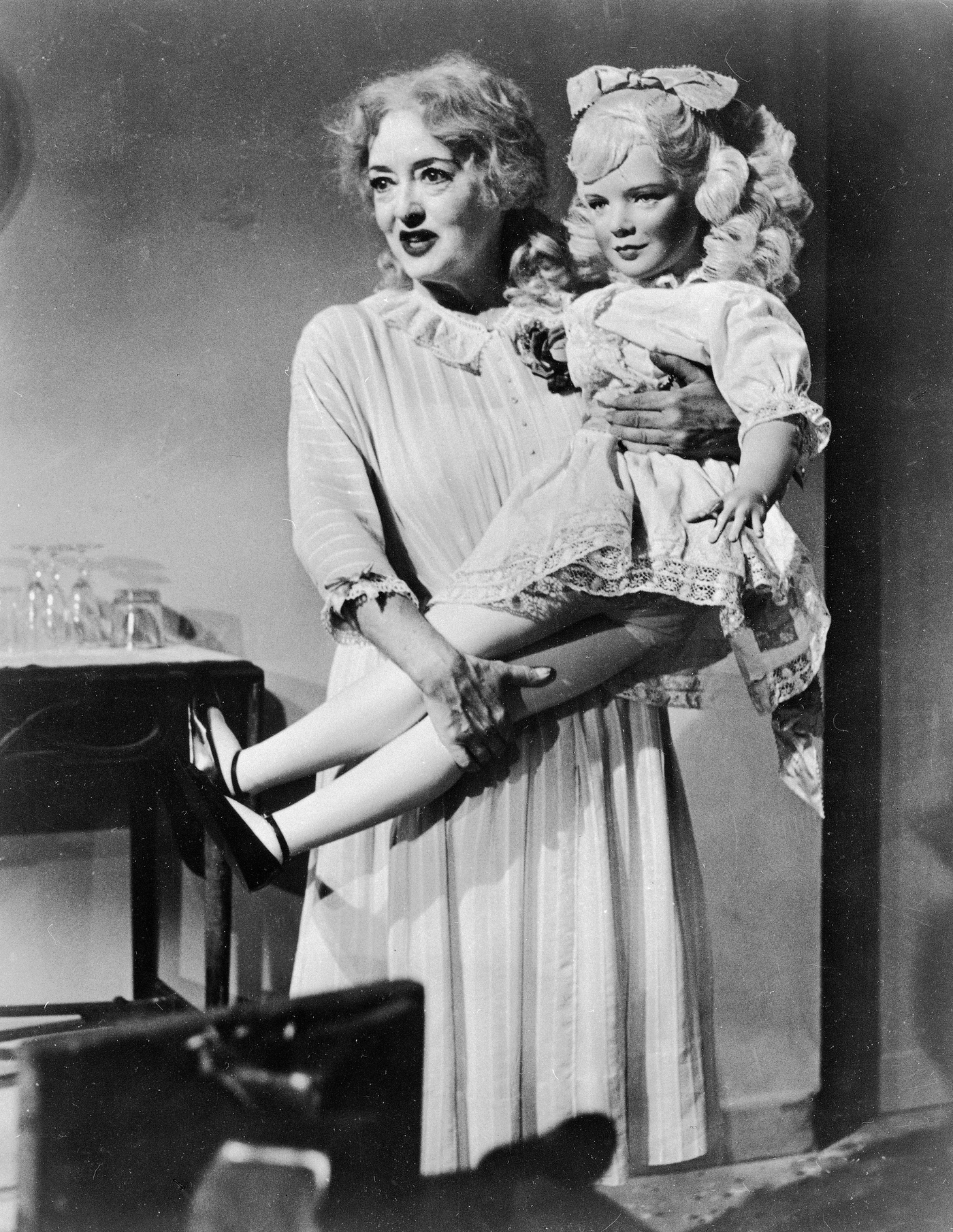 Bette Davis in the role of Jane Hudson in What Ever Happened To Baby Jane? The classic horror film, which has just turned 50, is being released on Blu-ray

Baby Jane Hudson is now 50 years old — or at least the strange and brilliant movie in which she's the main character is, just released as a beautifully remastered Blu-ray. Robert Aldrich's grotesque gothic tragedy is a cross between Gypsy, with its antithetical show-biz kid sisters, and Sunset Boulevard, with its decayed Hollywood glamour.

Baby Jane is a blond, curly-haired child star, a Shirley Temple wannabe, like Baby June in Gypsy. She's self-centered and more selfish than her plain sister, Blanche, who in the 1930s becomes a queen of Hollywood melodrama. Then it seems as if Jane, in a sudden fit of drunken jealousy, has rammed her car into her sister and crippled her for life. Years later, the sisters are still living together in a nightmare of mutually destructive co-dependency.

Director Aldrich is no stranger to movies about Hollywood or the grotesque. His best-known works — including Kiss Me Deadly, The Dirty Dozen and The Longest Yard — range from film noir and horror to biblical epic and archetypal action films. But the reason audiences crowded to see Baby Jane was probably not the director, but its two legendary stars: Bette Davis and Joan Crawford, in the first — and last — film they ever made together. There was evidently as little love lost between the actresses as between the sisters.

Fifty years after its premiere, What Ever Happened to Baby Jane? still holds up, both for its vivid direction and its fascinating performances. Crawford, as the trapped and suffering Blanche Hudson, is both convincing and quite sympathetic as the victimized sister — a more surprisingly understated performance than I remembered. We don't discover until the very end of the movie what a monster she really is. Davis, of course, has the more bravura role, the child star who wants to make a comeback as an adult, but who's still living in her childhood. Guilty and tormented, because she thinks she's caused her sister's injury, she tortures her sister and even commits a murder, yet her derangement also allows her to retain her childlike innocence.

Part of the movie is a kind of musical. Baby Jane becomes a star singing an awful sentimental ballad: "I've written a letter to Daddy. His address is Heaven Above." Written by Frank De Vol and Bob Merrill — who wrote the lyrics for Funny Girl and such '50s novelty hits as "If I Knew You Were Coming I'd've Baked a Cake" and "How Much Is That Doggie in the Window?" — it's a skillful parody of old music hall songs. Jane sings the song again as a grownup when she's making her pathetic attempt to revive her career. It's a moment both repugnant and perversely comic.

Finally, Jane learns the truth about what's behind her malignant relationship with her sister. Davis' performance achieves a kind of tragic grandeur, a moment before Jane's total retreat from reality of heartbreaking, almost Oedipal illumination that she and Blanche really didn't have to wreck each other's lives.

In the last minutes of the film, Jane is dancing like a child on the beach, surrounded by stunned onlookers, the audience she's craved for so many years. It's one of Davis' great screen moments, and she was nominated for an Oscar. Crawford wasn't. But Davis lost to Anne Bancroft in The Miracle Worker — and Bancroft's Oscar was accepted by none other than Joan Crawford. Ah, Hollywood!

But the weirdest moment on the new Blu-ray is not part of the movie. It's a bonus track of an appearance by Bette Davis on the late Andy Williams' TV show, singing a rock song called "What Ever Happened to Baby Jane?" Few horrors in the film itself are as scary as this clip.