Accessibility links
Rebel Advances In Congo Send Civilians Fleeing Rebels in the Democratic Republic of Congo made big gains this week on the country's eastern border. As has happened many times before in the area, the fighting touched off a mass exodus of civilians seeking safety. 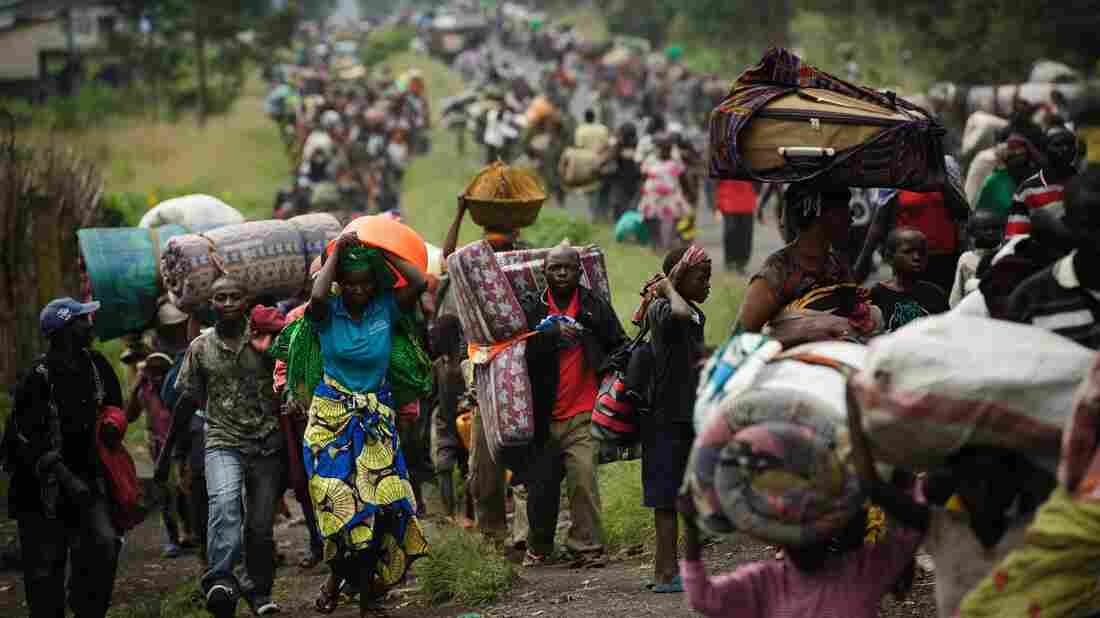 To escape fighting, thousands of civilians flee the town of Sake in the eastern part of the Democratic Republic of the Congo on Thursday. Rebels captured Sake and made other advances in the area this week. Eastern Congo and the larger region have been the scene of frequent fighting over the past two decades. Phil Moore/AFP/Getty Images hide caption

It's a scene that's become wearily repetitive in the eastern part of the Democratic Republic of Congo: An uprising drives out poorly trained government troops, creating havoc and sending large numbers of refugees fleeing for their lives.

This time the rebel group is M23, or March 23. Their revolt began this spring, and earlier this week they took Goma, an important town on the country's eastern border, just across Lake Kivu from Rwanda. The rebels then proceeded to take the next town over, Sake.

Just days ago, Congo's President Joseph Kabila had refused to negotiate with the rebels, who are made up of former government soldiers who defected.

But since then, Kabila, along with Rwandan President Paul Kagame and an M23 rebel chief, have all been in Uganda for talks about the fighting. 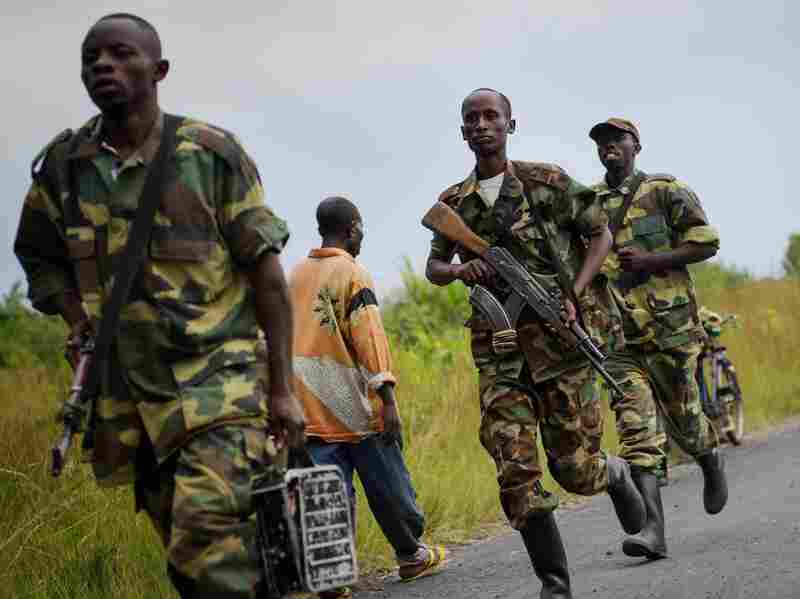 Congo rebels from the group known as M23 run toward the town of Sake in the eastern part of the country on Thursday. The rebels captured the town as part of their gains this week. Phil Moore/AFP/Getty Images hide caption 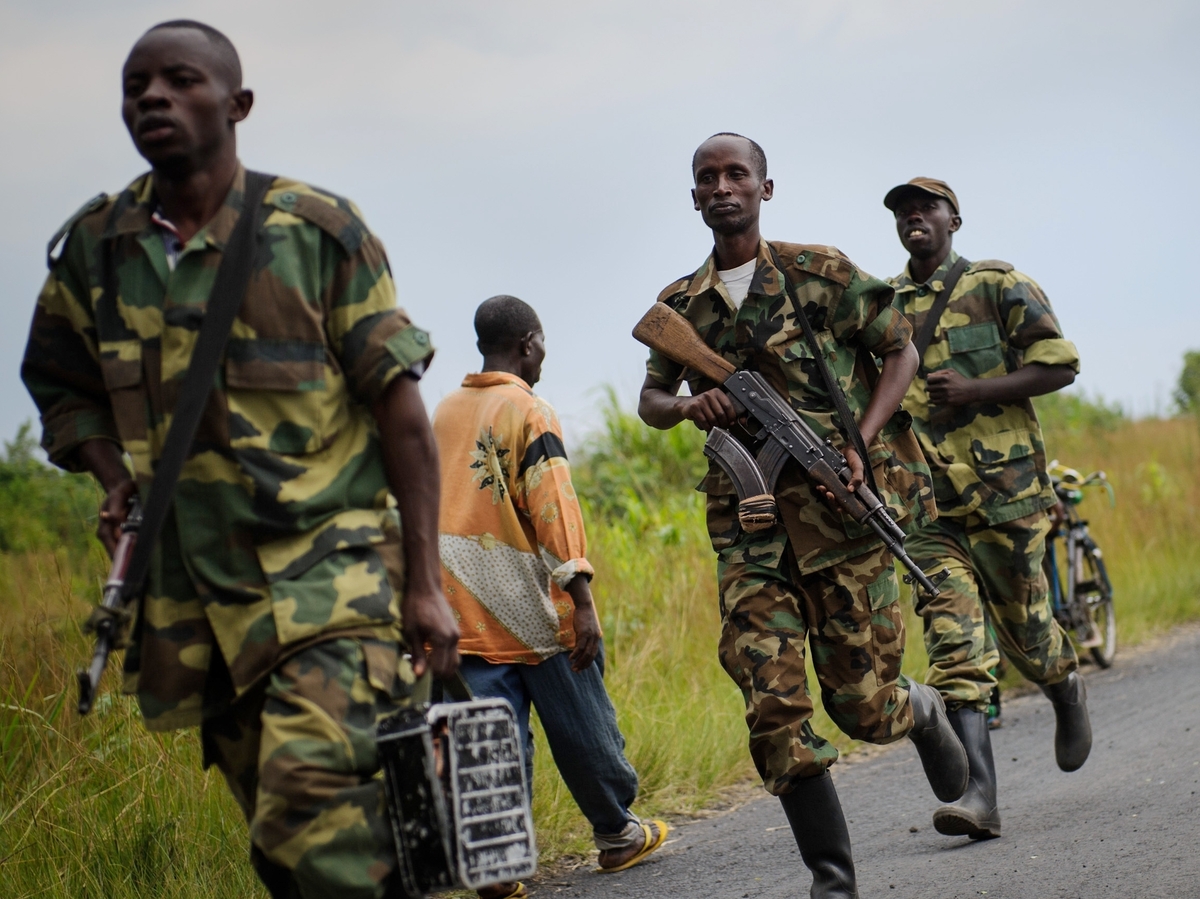 Congo rebels from the group known as M23 run toward the town of Sake in the eastern part of the country on Thursday. The rebels captured the town as part of their gains this week.

In another development, Kabila has fired his military chief of staff after a U.N. report accused him of selling guns on the side.

Meanwhile, in the nearly deserted streets of Sake, a six-man rebel squad patrols the town. After taking Sake, the rebels defended it against a counterattack.

"Sake is calm now. People left because of all the bombs fired by Kabila's army," says a rebel commander, who didn't give his name because he wasn't authorized to speak. "The leader of M23 told us to stop and wait here in Sake, not to take any more territory. Now we're awaiting word from [negotiations in Uganda]."

A Flood Of Displaced Civilians

Almost all of the 37,000 people in Sake have taken flight. The eight-mile road leading from Sake to Goma was jammed with an exodus of disconsolate villagers. They were carrying everything of value that they owned, because leaving it behind meant it was likely to be taken by looters.

Yet Again, Congo Faces The Specter Of Civil War

Foam mattresses, jerry cans and radios. Goats and pigs. Lanterns, stewpots and charcoal braziers. All of it muscled forward on the tops of heads, stuffed in backpacks or piled on heavy wooden scooters called "chukutos."

"All we know is that we have to leave. We don't know where we're going or where we'll sleep," says a distraught man whose small son struggles with a bicycle laden with two bulky bedrolls and three ducks hanging from the handlebars.

"You are the most powerful nation in the world," he says, addressing an American radio reporter. "Why don't you save us?"

The British charity Oxfam estimates that 100,000 to 150,000 refugees are on the move because of the M23 offensive. They're sleeping in schools, in grass lean-tos and in the open, even though it's been raining heavily.

This is not a new story. Marauding militias common in the wilds of eastern Congo have driven some of these same villagers from their homes again and again over the past 20 years.

A local leader named Muhindo Kininga counted nine people killed by shrapnel. That's not including the body of a man lying in the mud nearby, whose limbs were twisted under him, and whose face was frozen in a look of surprise.

A three-truck convoy full of blue-helmeted, expressionless U.N. soldiers passes on the road.

Residents glower at the U.N. soldiers. The residents are angry at the contingent of 1,500 international peacekeepers stationed in Goma who did nothing to stop the rebel advance. The U.N. says the force is not a substitute for the national army.

"We don't like them," says a lumberman named Kiwa Birizen. "They don't do anything for us."

He's understandably testy. There's an unexploded mortar round lodged in his kitchen floor, and he says he hasn't eaten in three days. He says retreating government soldiers looted all the stores in Sake before abandoning the town and fleeing to the south.

When asked which side they support, all the refugees interviewed gave the same answer: "Neither side. We just want peace."