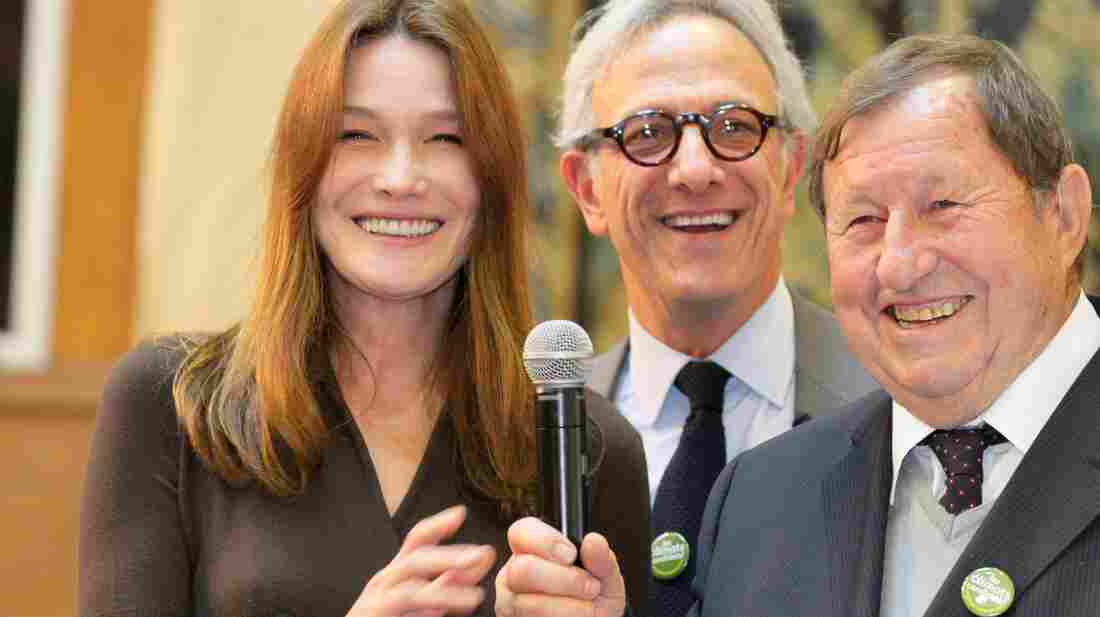 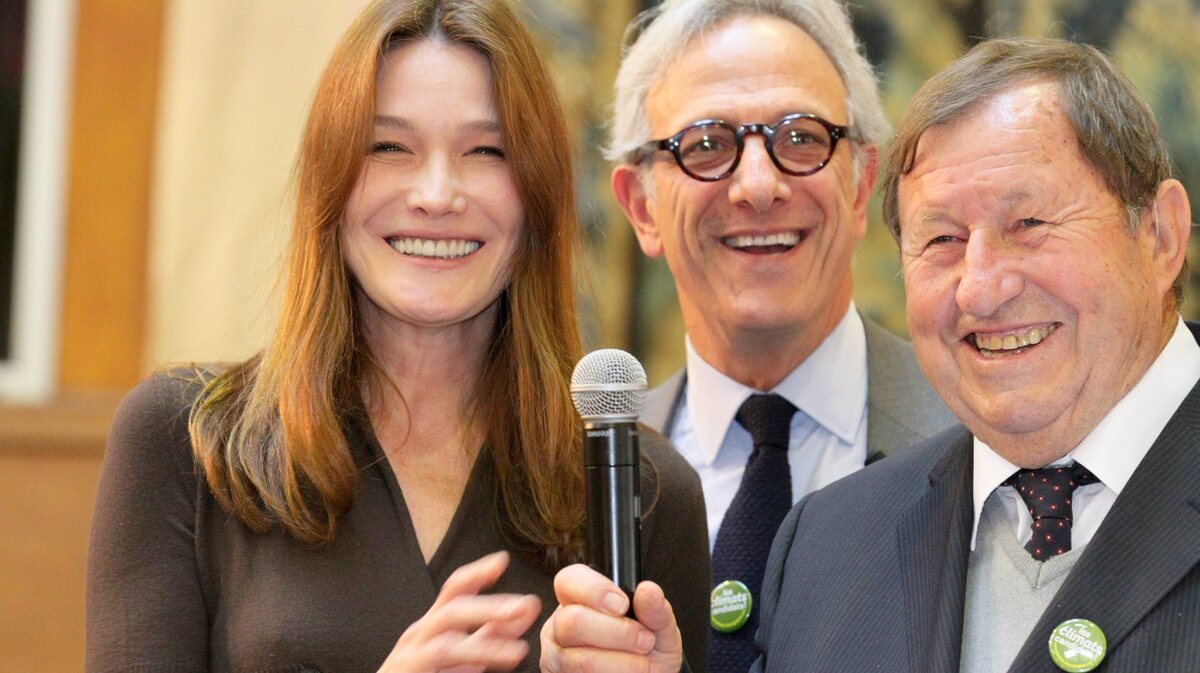 For the last century and a half, the wine season in France's grape-growing region of Burgundy has revolved around one major commercial event. On the third Sunday in November, hundreds of barrels of the recent harvest are sold to the highest bidder in a charity wine auction. The historic event, which took place this year on Nov. 18, has evolved into an A-list rendezvous for the power players in the international wine industry.

The wine auction at the Hospices de Beaune began in 1851 as a pure Burgundian affair. These days, the high-powered event attracts wine exporters and aficionados from around the world. An auctioneer from Christie's wields the gavel. The sound of Russian and Chinese buzz on the auction floor. 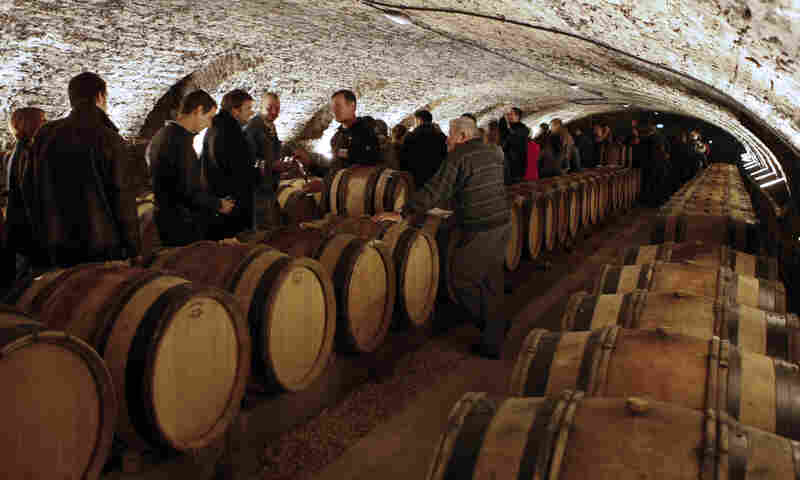 Guests attend a wine tasting in the cellar of Hotel Dieu before the wine auction. Emmanuel Foudrot/Reuters /Landov hide caption 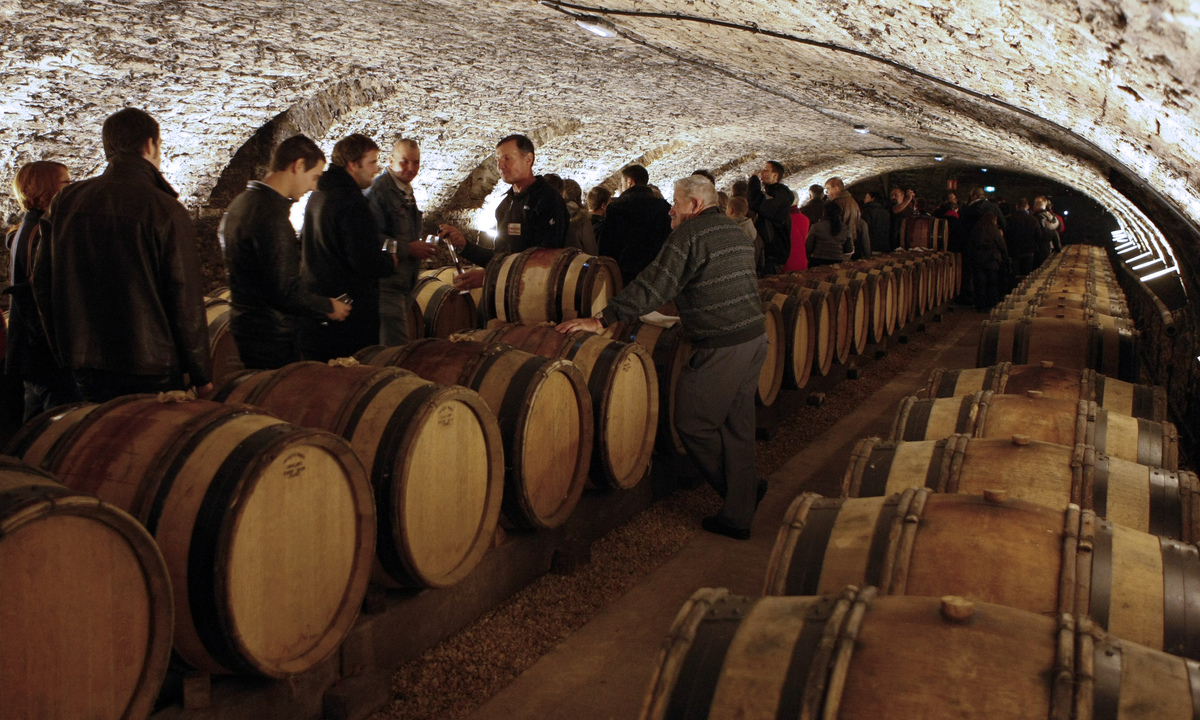 Guests attend a wine tasting in the cellar of Hotel Dieu before the wine auction.

"This is still the Mount Everest of the wine world, and if you want to know about wine you have to encounter Burgundy," wine critic Greg Love says. "Where else in the world can you get such a variety of great wines with such aging power that also can be enjoyed when they're young. This is the great wine region of the world."

Bidders buy barrels, not bottles, of wine that has just begun aging and won't hit the shelves for another two years. Typically, the Hospices de Beaune auction is a first judge of the new vintage's quality and sets the prices. The wines on the block are legendary — Pommard, Cotes de Nuits, Clos Vougeot — and so is the venue.

The Hospices — a hospital and almshouse in the medieval city of Beaune — was built in 1452 just after the Hundred Years War, when famine and misery ravaged the countryside. Known as a palace for the poor — the old and sick and mothers about to give birth were welcomed for treatment and refuge here until 1983 when the last patient checked out — it became one of France's top tourist attractions. The buildings' facades and gargoyles are a stunning example of Gothic architecture and its multicolored tile roof is in the grand style of the kingdom's former rulers, the dukes of Burgundy.

Three days of partying, known as Les Trois Glorieuses, take place around the auction. There are wine-soaked dinners, and music and crowds fill Beaune's cobbled streets. Burgundy is much smaller than France's other major wine-growing region, Bordeaux, and there is an intimate feeling here. Vineyards are tiny — family-owned plots that go back generations. The valuable wines auctioned off come from land donated to the hospice by Burgundy families over the last five centuries. The proceeds of the auction go to hospitals in the region. One barrel is always donated to an outside alms organization.

This year, it's for the charity foundation set up by Carla Bruni-Sarkozy — former pop singer, supermodel and first lady of France — who was happy to donate her star power in return for a barrel of Corton Grand Cru.

As Bruni-Sarkozy charms and coaxes bidders to go ever higher, the tenseness of the auction floor melts away into laughter and bonhomie. To everyone's delight, a battle between two top bidders keeps the price rising.

A group of Chinese buyers in the front row is clearly in the thrall of it all. One of them, a 59-year-old real estate mogul who doesn't want to give her name, says China is becoming crazy over Burgundy wines.

"Because it's good. It's really nice, you know, taste and long history," she says. "In Burgundy, people love their land. It's so ... impressive for us, the French culture, we love it."

The buyer, Ukrainian millionaire Igor Iankovsky, takes the stage to thank everyone. He says the wine will no doubt fetch even higher prices when he auctions off the barrel's 300 bottles for his own charity back in Kiev, where Burgundy is in fashion. Sixth-generation winemaker Alberic Bichot is pleased to have placed the winning bid for his client.

"It's just fabulous, and I am very proud for my customer," he says. "He's from Ukraine. And [Bruni-Sarkozy's] going to deliver the wine, no? I do hope so. She promised."

Because of bad weather, this year's Burgundy harvest is the smallest in nearly half a century. But the quality is said to be outstanding. This year's Hospices de Beaune auction fetched record prices, raising an all-time high of $7.5 million for Beaune hospitals.