Accessibility links
A Wave Of Plagiarism Cases Strikes German Politics Several top government officials have been caught up in an embarrassing cheating scandal — including the defense minister, who resigned as a result, and the education minster, who is under investigation for her doctoral dissertation. An informal group of "plagiarism police" has undertaken the hunt. 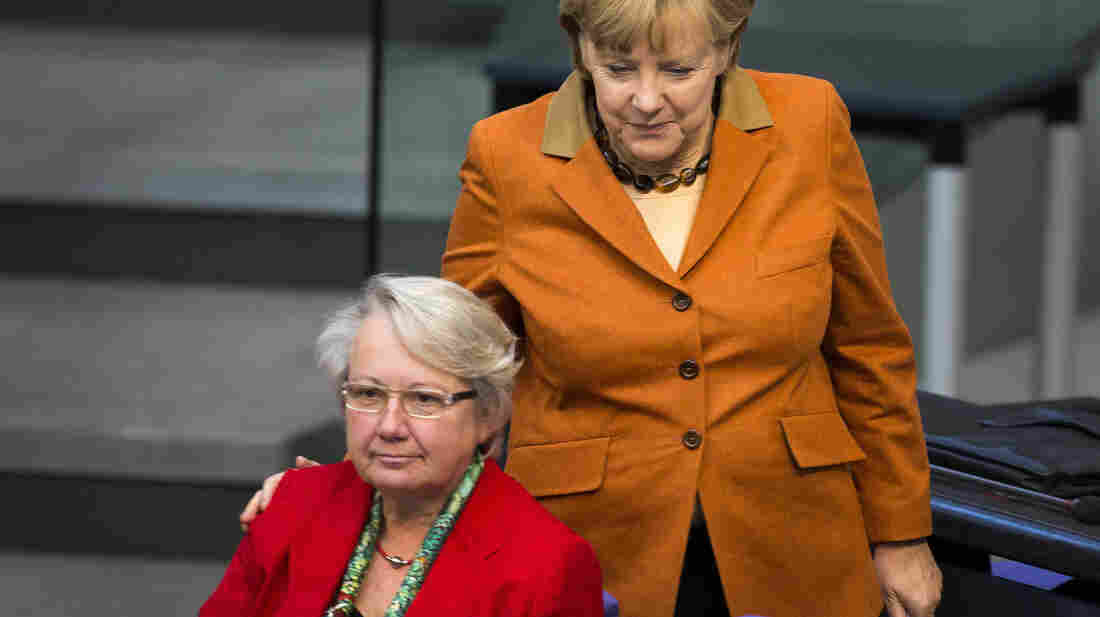 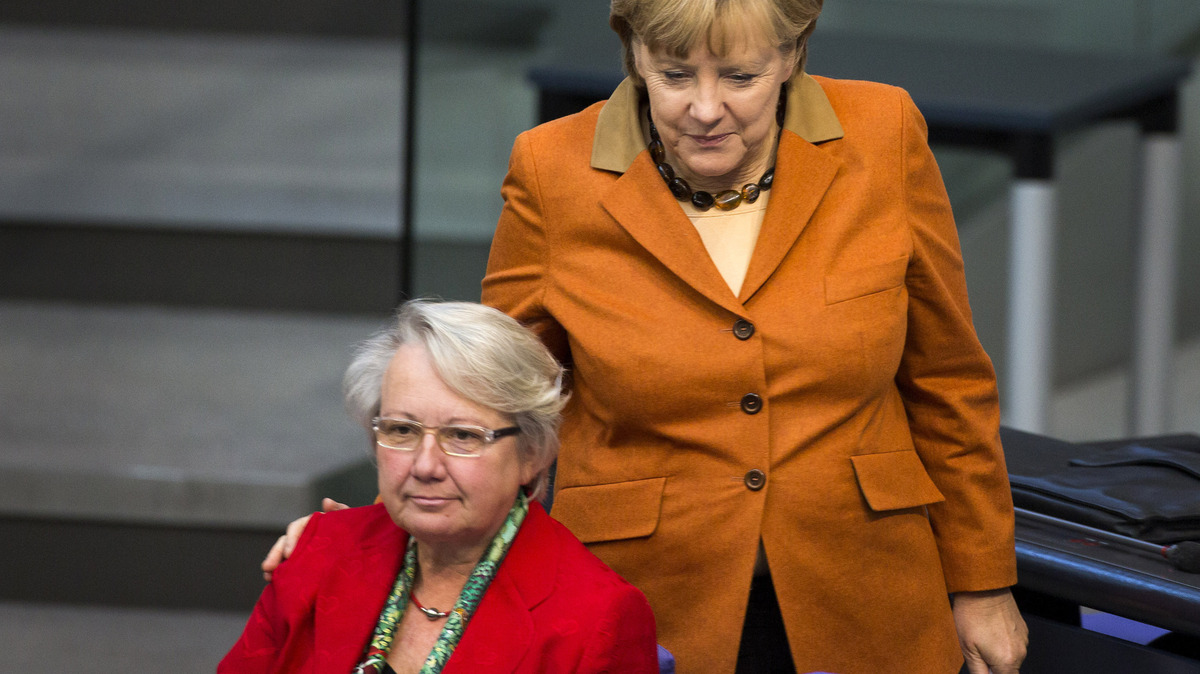 German Chancellor Angela Merkel (right) has given guarded support to Education Minister Annette Schavan, who is facing calls to resign over allegations of plagiarism.

More than half a dozen politicians in Germany are caught up in an embarrassing cheating scandal that last year cost the German defense minister his job.

The country's education minister is also implicated. She, like the other politicians, is accused of plagiarizing while earning a doctorate degree.

Their accusers are private citizens who use the Internet to coordinate their hunt for cheaters.

One of Germany's more famous cybersleuths is an American professor named Debora Weber-Wulff.

The Pennsylvania native says she began hunting for plagiarists nearly a decade ago, after an incident at the Berlin University of Applied Sciences.

Weber-Wulff says she had asked her students there to write a report in English. The papers she got back were terrific — too terrific, as it turns out.

Her suspicions peaked when she read one report that used the word "inculcate."

"Now I have a pretty good vocabulary in English and I thought: 'That's kind of strange that a German kid would know words I wouldn't know,' " she says.

By plugging parts of the report into Google, Weber-Wulff quickly discovered the student had lifted passages from another paper. As it turns out, so did 11 other students in her class of 32. 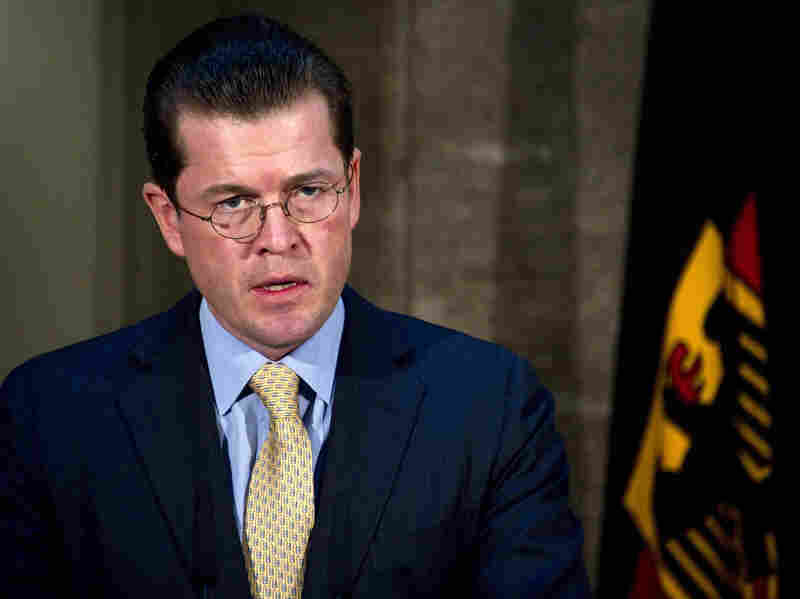 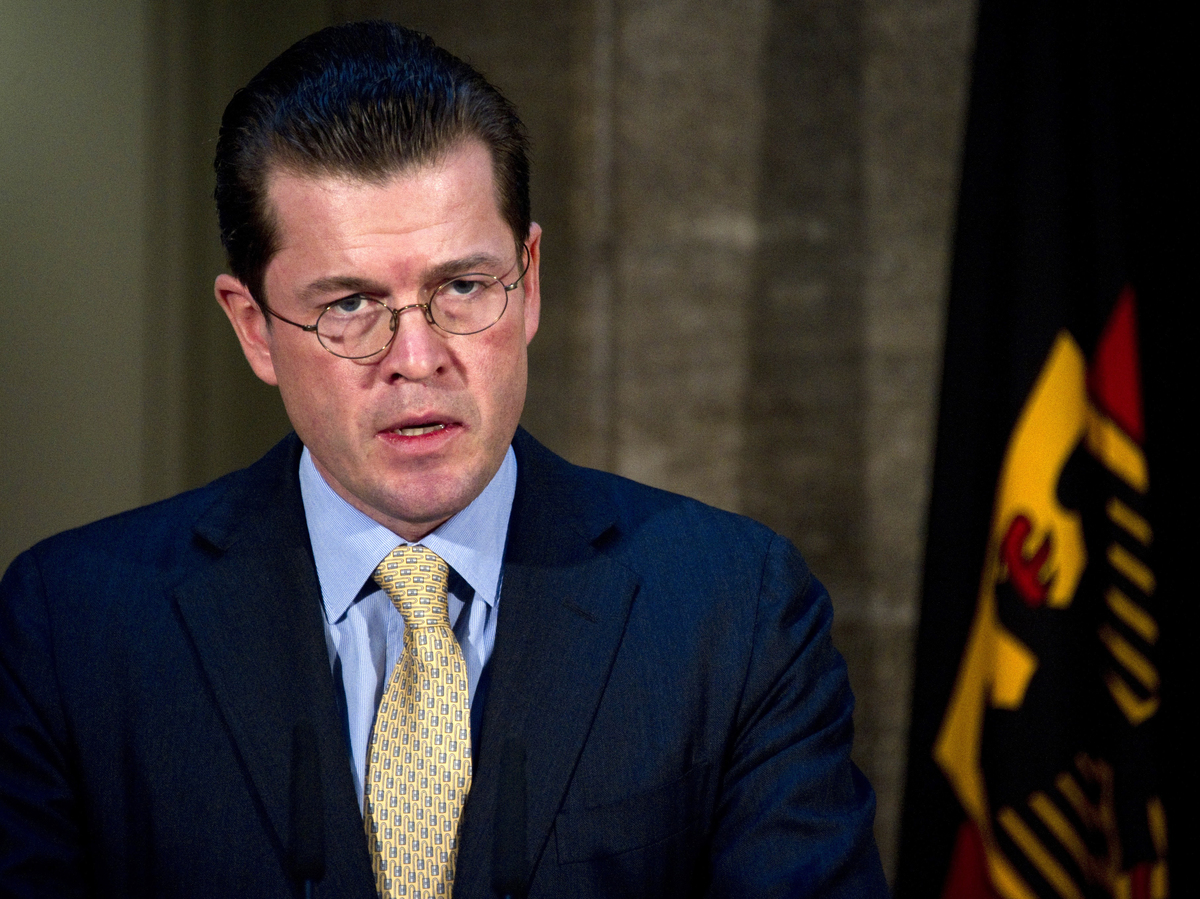 German Defense Minister Karl-Theodor zu Guttenberg was stripped of his doctoral degree and resigned last year after accusations of plagiarism.

"I was so irritated because I had studied in the States at [the University of California, San Diego] and we had a very strict policy on plagiarism that was made as clear to us in the '70s," she says. "This is nothing new."

Weber-Wulff says there weren't such strict policies in Germany, nor were there any serious government or academic efforts to prevent or ferret out plagiarism.

On the contrary, individuals are under pressure to get a doctorate degree, which earns the bearer respect and is important to anyone who wants to achieve high-ranking political office.

German public interest in the subject began to grow. Some Germans created collaborative websites, or wikis, where they posted plagiarized passages they uncovered.

One such wiki posted a bombshell in February 2011, accusing then-Defense Minister Karl-Theodor zu Guttenberg of lifting most of his doctoral dissertation from other works.

The German aristocrat and rising political star was stripped of his doctorate and resigned his Cabinet post the following month.

Ulrich Schulte, the Parliament bureau chief for Die Tageszeitung, a left-leaning daily newspaper, says the incident shook his countrymen's faith in their leaders. It also prompted reviews of other politicians' academic work.

New wikis began popping up, including one called Vroniplag, which was named for a politician's daughter accused of plagiarism.

Professor Weber-Wulff, who contributes to Vroniplag, says the fraud the education minister is accused of wasn't as clear-cut as that perpetrated by former Defense Minister Guttenberg. Much of it had to do with Schavan not making the many citations she used clear enough.

"I myself had doubts at that time because there were so many small bits that I didn't feel we were able to do justice to it," Weber-Wulff says.

Instead, another member took the allegations and posted them on a separate blog last May using the pseudonym "Robert Schmidt."

"At no point did I attempt to deceive anyone with regard to my dissertation work. I refute these claims that I plagiarized and I will fight," Schavan said in October on German television ZDF. "I owe myself and academia that much."

She also lashed out at her accuser for being anonymous and tried but failed to silence public discourse about her case.

One of her staunchest supporters is Humboldt University Professor Emeritus Dietrich Benner. He says Schavan is being crucified over a technicality.

Benner says that people without position and little money are using such plagiarism claims to become famous.

So far, no action has been taken against the education minister. Her dissertation is being reviewed by academics at the University of Duesseldorf, which issued her the doctorate.