Accessibility links
Manning Plea Offer Another Odd Piece Of An Odd Case Bradley Manning, the Army private accused of giving information to the website WikiLeaks, is expected in court on Tuesday. Manning denies being a spy and recently offered to plead guilty to minor charges. This is just one more oddity in a case some describe as "bizarre." 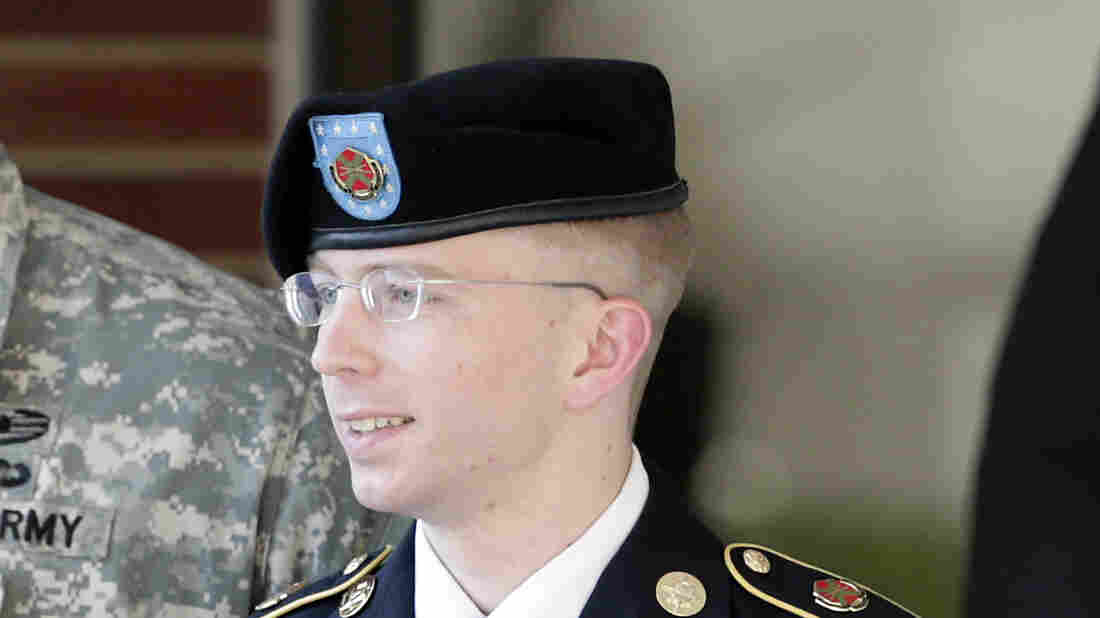 Army Pfc. Bradley Manning is escorted out of a courthouse in Fort Meade, Md., after a pretrial hearing in June. Manning is charged with aiding the enemy by giving hundreds of thousands of classified diplomatic cables and war logs to the secret-sharing website WikiLeaks. Patrick Semansky/AP hide caption 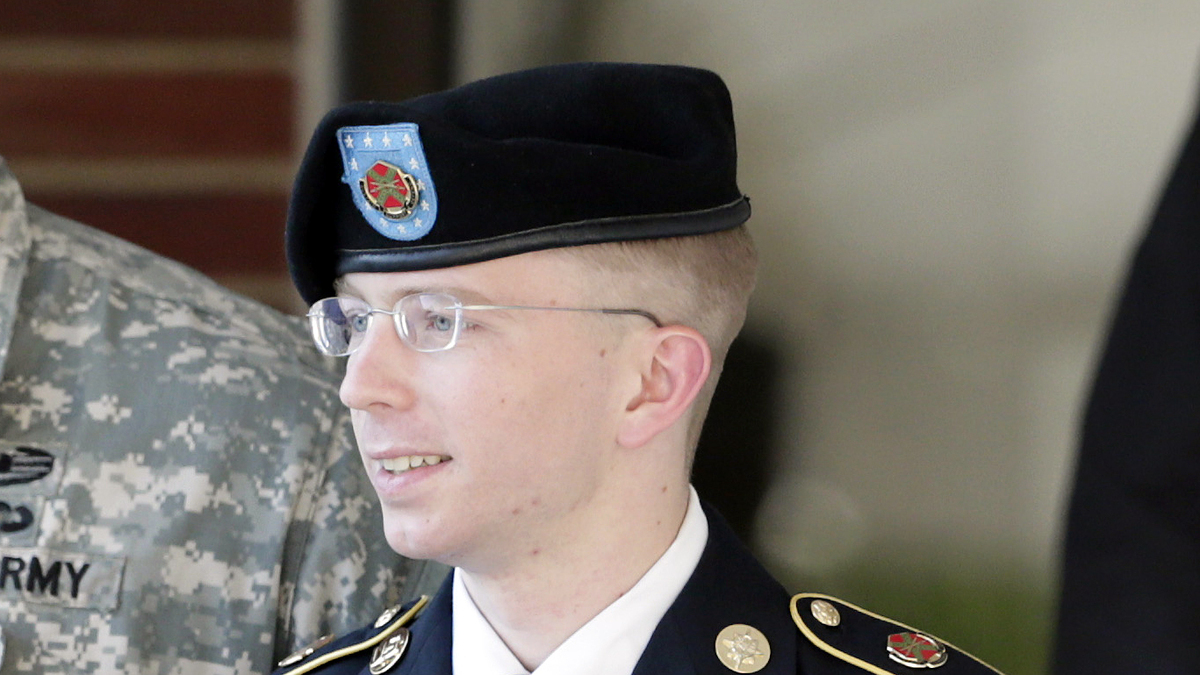 Army Pfc. Bradley Manning is escorted out of a courthouse in Fort Meade, Md., after a pretrial hearing in June. Manning is charged with aiding the enemy by giving hundreds of thousands of classified diplomatic cables and war logs to the secret-sharing website WikiLeaks.

The young Army private accused of passing diplomatic cables and war reports to the website WikiLeaks has made an unusual offer: Bradley Manning says he'll plead guilty to minor charges in the case. But he rejects the idea that he ever acted as a spy or helped America's enemies.

It's just another twist in one of the oddest prosecutions in years. The case began nearly two and a half years ago, when U.S. investigators accused Manning of pulling off the biggest leak of classified information in American history. They say he accessed embarrassing State Department cables and military field logs and put the information on discs he labeled as Lady Gaga songs.

The military sent Manning to a brig in Quantico, Va., where supporter Jeff Paterson says his treatment was extreme.

"For nine months, he was kept in complete isolation from other prisoners," Paterson says. "He had really no human interaction at all except for guards that would yell at him every five minutes saying, 'Are you OK?' Basically, it was a way to use the pretense of mental health concerns to literally drive him crazy."

Paterson and other members of a support network have protested outside the White House gates. They disrupted a fundraiser for President Obama and tried to generate national outrage over the case. Eventually, authorities moved Manning to Fort Leavenworth, Kan. Jailers there let him read and sleep on a normal mattress.

But Manning still hasn't had his court martial, even though rules say it should take place 120 days after a person is detained.

"This has been one of the slowest courts martial that I can remember," says Eugene Fidell, who teaches military law at Yale University. "Particularly where the accused is in pretrial confinement, I just don't understand it."

There's something else Fidell doesn't understand.

"It is remarkable how difficult it is, how much more difficult it is to get basic information in this case than it is in a regular trial in federal district court," or even the ongoing military proceedings in Guantanamo Bay, Cuba, for the men accused of plotting the Sept. 11, 2001, terrorist attacks, he says.

By contrast, military prosecutors in the Manning leaks case almost never make their motions public. Neither does the judge. That leaves Manning's civilian lawyer, David Coombs. He sometimes puts up redacted court papers on his website, but only after military minders approve them. The secrecy's so intense that reporters and the Center for Constitutional Rights have sued to get access to information.

"People use the phrase 'the fog of war,' " Fidell says. "But this is a case that seems to be the fog of law."

And, then, as if things couldn't get any stranger, Manning's lawyer signaled that Manning had offered to plead guilty to a few minor violations. But the idea apparently was not part of a plea agreement with military prosecutors and Manning is guaranteed nothing in exchange.

"Accused will often plead with exceptions and substitutions to some other offense in the hopes of, say, getting leniency," says Richard Rosen, a military law expert at Texas Tech.

Under the court rules, prosecutors can still go ahead and bring Manning to court martial on the very serious charges of aiding the enemy and misusing classified information.

"The military prosecution is only interested in what happened," Paterson says, "whereas the defense team wants to tell people why things happened."

Why things happened has always been the heart of Manning's public defense: He says he was a whistle-blower offended by American abuses in the wars in Iraq and Afghanistan.

The theme was picked up by musician Graham Nash, who played a special song for Manning at a recent fundraiser in California. The lyrics include such lines as, "All I did was blow the whistle and the game began," and "Tell the truth and it will set you free, that's what they taught me as a child."

Manning's supporters, who include Nobel laureate Desmond Tutu, hope his alleged mistreatment will translate into a reduced prison sentence. The issue could come up Tuesday at a court hearing in Fort Meade, Md.

It's unclear whether the military judge will buy that argument, says scholar Fidell.

"This entire case has been conducted so far in a very bizarre way so far both by the prosecution and the defense," he says.

And Fidell says, why should the end of the case follow any different pattern?