Accessibility links
Ask A NASA Astrobiologist About Dec. 21 'Doomsday' NASA astrobiologist David Morrison has taken it upon himself to answer hundreds of questions about the science of doomsday predictions. At NASA's Ask an Astrobiologist site, Morrison thoughtfully responds to questions like: Will we have Christmas this year? 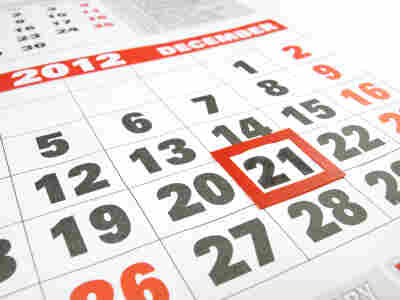 Some doomsayers predict that the world will end on Dec. 21, 2012, citing the end of the pre-Columbian Mayan calendar. iStockphoto.com hide caption

On Dec. 21, 2012, some fear that a rogue planet will collide with Earth and destroy the planet, or that the supposed end of the Mayan calendar will lead to the obliteration of the universe.

When people have questions about these scenarios, they often turn to the Internet.

NASA astrobiologist David Morrison has taken it upon himself to enter that online conversation and answer hundreds of questions about the science of existential threats.

On NASA's Q&A site Ask an Astrobiologist, Morrison debunks and details the origins of popular apocalyptic scenarios and thoughtfully responds to questions about potential doom.

"Many people don't know what they're afraid of," Morrison tells NPR's Neal Conan, "but they have heard this doomsday thing so often that they just come to me with a simple question: Will we have Christmas this year?"

Morrison says he's not quite sure how he became NASA's doomsday expert, but the questions started coming in around 2007 or 2008. "They came out of the blue," he says. "I had no idea anyone was worried about a 2012 apocalypse. So I answered."

The questions kept flooding in, and the blog has become something of an obsession for Morrison over the past year. Ask an Astrobiologist has received more than 5,000 questions about doomsday 2012, and Morrison has posted more than 400 responses.

As the senior scientist of the NASA Astrobiology Institute, Morrison has a lot of scientific knowledge about how the universe works. But he says the logic is actually pretty simple.

"If there were anything out there like a planet headed for Earth," he says, "it would already be the brightest object in the sky after the sun and moon. Everybody on Earth could see it.

"Go out and look. It's not there. You don't need to ask the government or me, just use your eyes. There's no interloper out there headed into the solar system."

Though some of the questions may seem frivolous and outlandish, Morrison receives queries from people who are legitimately concerned and contemplating suicide. "Another extreme one ... I got was quite touching. It was: My only friend is my little dog. When should I put her to sleep so she won't suffer in the cataclysm?"

NASA does not track the origin of the responses, but based on context, Morrison says most of them are from the U.S., and a lot also come from the United Kingdom, India and Pakistan.

Morrison thinks the increased public interest in the subject can be linked to TV shows and movies focused on the apocalypse, and also the increase in natural disasters across the world.

As for his plans for the site after Dec. 22, 2012, Morrison says, "I'm going to drink a bottle of champagne and say that somebody else should take it up."

Even when doomsayers wake up on the day after the predicted apocalypse, Morrison says he doesn't expect the worries to stop. "Some of them will just think it's going to happen next year or the year after. There's always people who want there to be an apocalypse. But, Morrison says, he's moving on to other quests.

"I'm going to go back to worrying about little things, like life in the universe and searching for life on Mars," he says. "How dull compared to the end of the world."

Learn More About The Beyond 2012: Google+ Hangout With NASA