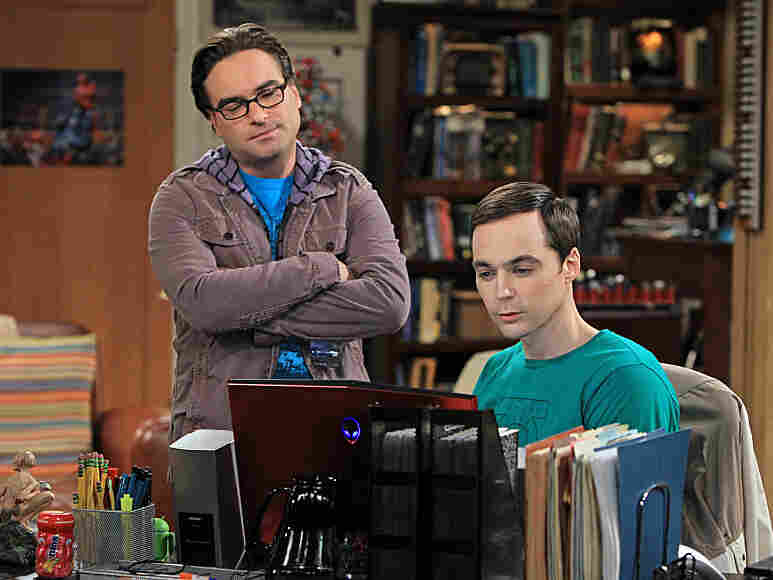 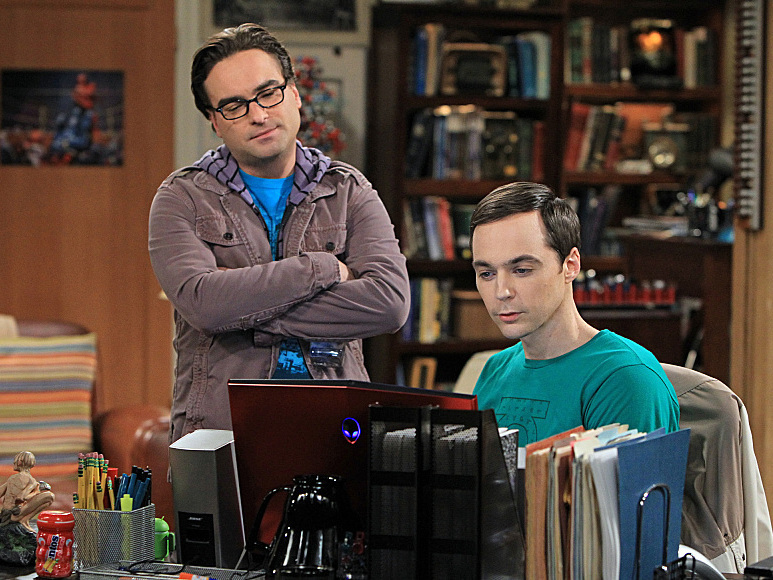 Johnny Galecki and Jim Parsons in The Big Bang Theory, one of Chuck Lorre's three popular comedies currently on CBS.

On Tuesday's Morning Edition, NPR's Neda Ulaby has a story about Chuck Lorre, the producer whose name is attached to three of the five highest-rated comedies on American television last season: The Big Bang Theory, Two And A Half Men, and Mike & Molly. (Mike & Molly is both the newest of these shows and the underachiever, being only the fifth highest-rated comedy and the twenty-ninth highest-rated show on all of broadcast prime-time television in total viewers for the 2011-12 season.) Men and Big Bang are both massive syndicated moneymakers, to the point where TBS has been very nearly rejuvenated just by being able to boast the rights to the latter and FX has been so boosted by the former that it signed on to air ex-Man Charlie Sheen's Anger Management.

Lorre probably got his biggest dose of public exposure during the Sheen epic, which culminated in the star leaving Two And A Half Men, seeing his character emphatically killed off and literally burned to ashes that were then thrown in the air, and being replaced by Ashton Kutcher. But Lorre has been around sitcoms for much, much longer than that. He worked on Roseanne and produced the reasonably well regarded Grace Under Fire, the clearly troubled Cybill, and the very sweet Dharma & Greg. Those – particularly if you combine them into a body of work with the three Lorre works on now – are actually very, very different shows, despite the fact that they all have, to varying degrees, a pretty traditional sitcom feel.

In one sense, there is a Chuck Lorre brand; call it "50 percent sweet and 50 percent vulgar, plus or minus 30 percent depending on the show," or possibly "the comedy that the plurality of Americans like, whether you personally think it's clever or not," or possibly "comedy for people who hate critics." (In fairness, both the leads on Mike & Molly and the cast of The Big Bang Theory are often spoken of kindly even in critical circles, even when the shows they're on are less so.) But in another sense, Lorre executes a kind of comedy that can vary enormously in both tone and quality – in part because he created these shows with different collaborators.

Two And A Half Men is a product largely of Lorre's collaboration with Lee Aronsohn, who was behind the "enough lady jokes!" controversy that happened this spring. Aronsohn displayed at that time (and essentially acknowledged) a distrust of women that comes through loud and clear on the show, which he agreed during that controversy is about damaged men and the women responsible. Men remains a pretty nasty, angry show, and by far the one with the most consistently juvenile sensibility. The Big Bang Theory is much warmer and more optimistic about humanity. It was co-created by Lorre and Bill Prady, who used to work for – of all people – Jim Henson, and whose Twitter chatter is with people like Wil Wheaton and other geek superstars. Mike & Molly, which has a genuinely sweet romance at its center and some very brittle supporting characters, was co-created by Lorre and Mark Roberts, who used to write for Men but uses a much lighter tone these days.

All three shows come from the Lorre machine, and there are rhythms and stylistic qualities in common. Lorre is effectively the primary architect of what became the distinctive feel of CBS comedy in the post-Everybody Loves Raymond era. But the three shows are actually quite different, aside from the basic fact that they're all popular (two of them are massively so) and none of them are critical darlings.