Accessibility links
For Cyprus' North And South, A Reversal Of Fortunes For decades, the Turkish-occupied north lagged far behind the independent nation to the south, with its strong ties to Greece. Now, it's the Turks in northern Cyprus who have the roaring economy, as Greek Cypriots await the terms of an EU bailout. 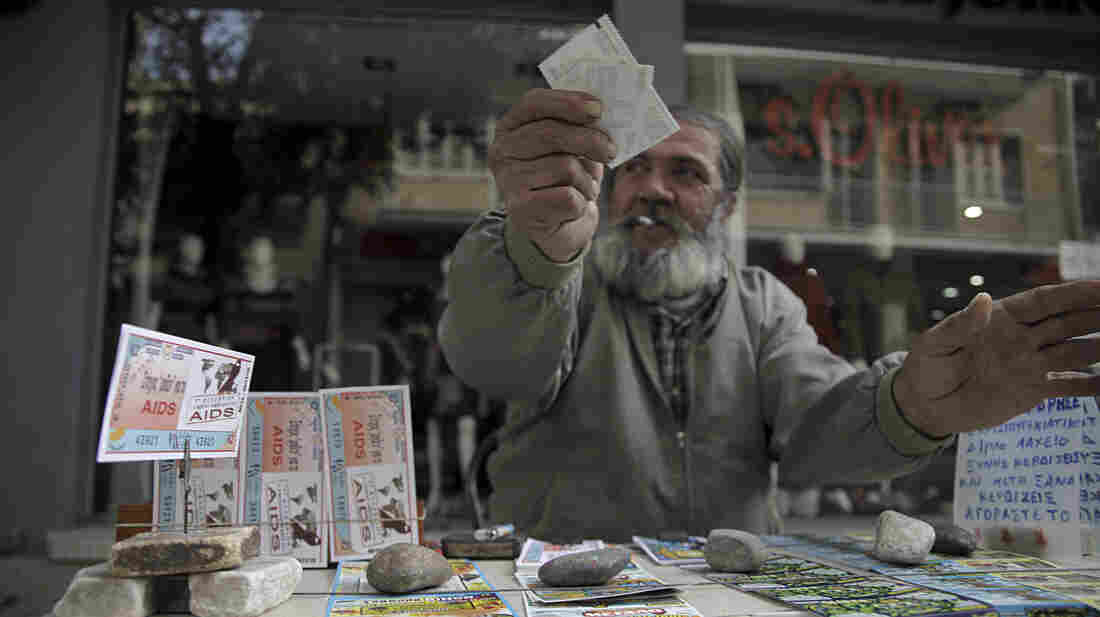 A man sells lottery tickets in Nicosia, the capital of Cyprus, last week. The island has been divided since 1974. Now, the once-poor north has strong economic growth while the once-wealthy south is set to become the fourth eurozone country receiving a bailout. Florian Choblet/AFP/Getty Images hide caption

Just a few years ago, Cyprus was considered a wealthy country, though that referred mostly to the Greek Cypriots on the southern part of the divided island. When Cyprus entered the eurozone in 2008, analysts were wondering what would become of the much poorer north, which has been occupied by Turkey since a 1974 war.

Now, the Turks in northern Cyprus have the booming economy, while Greek Cypriots, crippled by exposure to ailing Greek banks, are waiting for final approval on what will be the fourth sovereign bailout of a eurozone country.

After Turkey invaded Cyprus nearly four decades ago, Greek Cypriot families in the north fled their homes and relocated in the south — which is now an independent nation in the European Union. 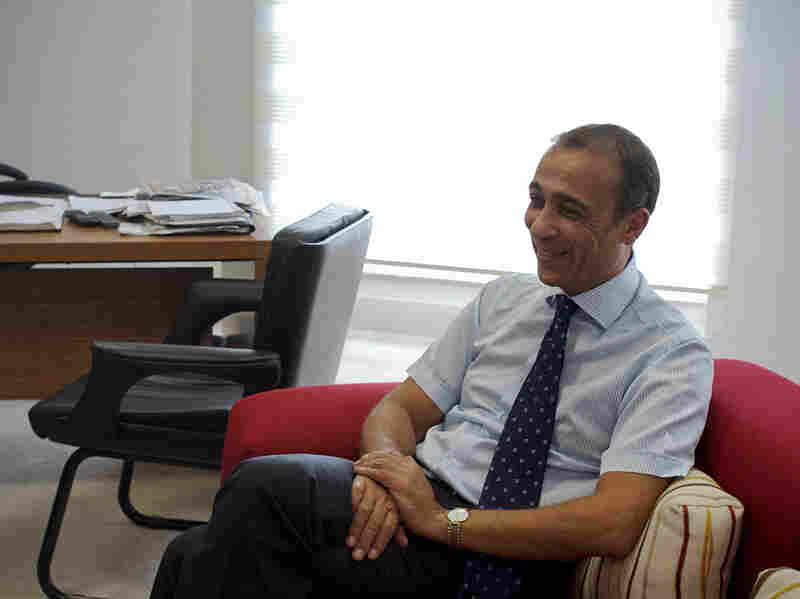 Fikri Toros, a Turkish Cypriot businessman, says his family's company struggled for years because of embargoes and a weak Turkish lira. But its fortunes have improved with Turkey's economy. Joanna Kakissis/NPR hide caption 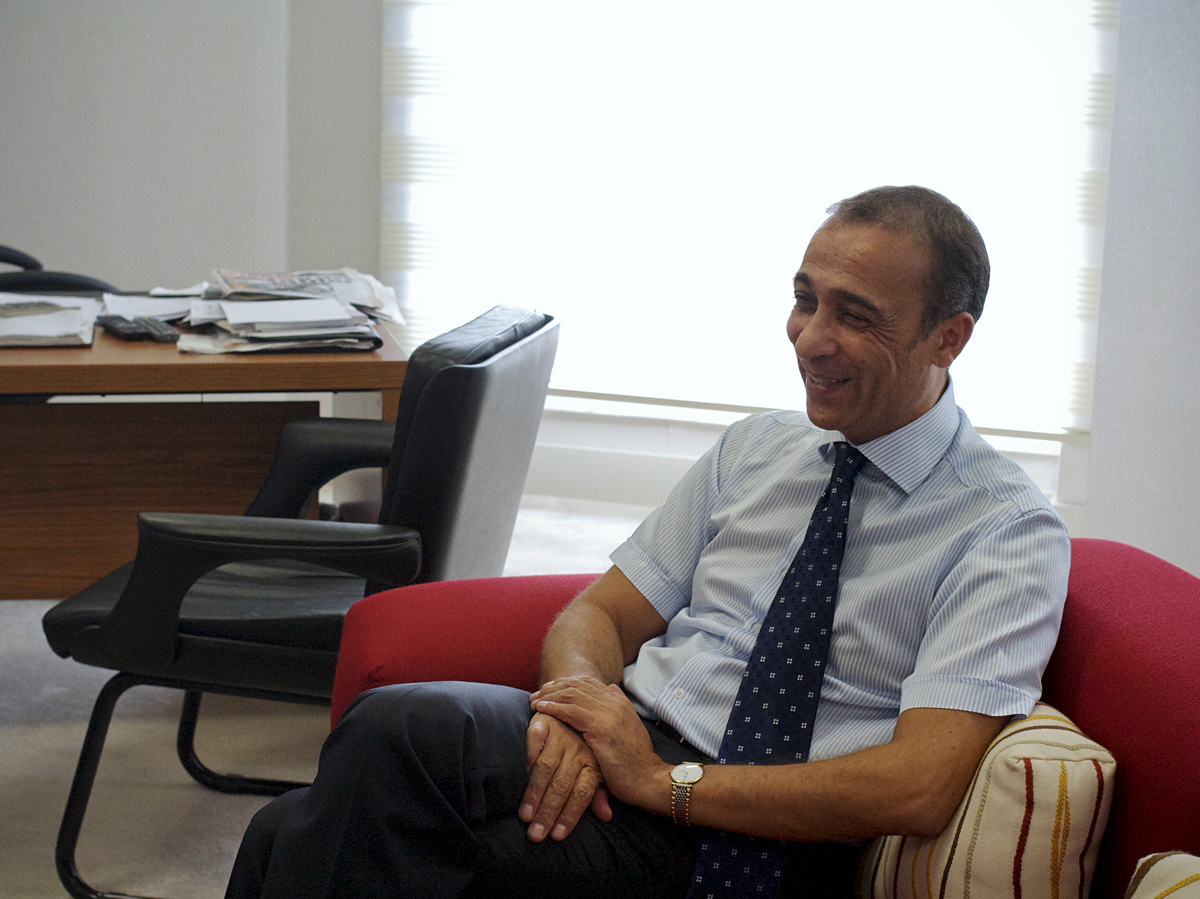 Fikri Toros, a Turkish Cypriot businessman, says his family's company struggled for years because of embargoes and a weak Turkish lira. But its fortunes have improved with Turkey's economy.

"One of the biggest challenges was to deal with the high inflation, very high interest rates and use of the Turkish lira in general," Toros says.

In 2003, the border dividing the island opened. Turkish Cypriots hoped they could partner with the flourishing south — and Europe.

But Greek Cypriots rejected a unification plan by then-U.N. Secretary-General Kofi Annan and joined the European Union in 2004 without the Turkish Cypriots.

Ergun Olgun, a former adviser to the Turkish Cypriot government, says that killed incentive to work together.

"The European Union destroyed the basis for the two sides to reach the kind of sustainable agreement," says Olgun, "because there is no need for Greek Cypriots to share their power with the Turkish Cypriots at this time."

The divisions and dependencies deepened. The Greek Cypriots adopted the euro in 2008. But by then, the Turkish lira was strong, says Ersin Tatar, the Turkish Cypriot finance minister.

"Turkey's much stronger, and because Turkey's stronger, that strength is reflected in north Cyprus," he says. "We have more Turkish tourists, more Turkish companies, Turkish commercial flights. Turkey is opening us up to the world."

Just 300,000 people live in the northern part of Cyprus. The Turkish Cypriot economy has grown by 5 percent annually in recent years, partly, Tatar says, because of an education industry financed by Turkey.

"Our universities now number about six, and two more are being built with support from Turkey," he says. "We have about 50,000 students. About 30,000 students are from Turkey, but we have a growing number from Iran, Azerbaijan and African countries."

Many sign up at Near East University, which has campus mosques and a fast-growing Islamic Studies program. That's where Hayrettin Gunaydin, who's also from Turkey, teaches. He says many Turkish professors are also arriving to teach Arabic and Turkish history.

There's a checkpoint to enter the south, where another 800,000 people live in the Republic of Cyprus, nearly all of them Greek Cypriots.

The cities there have malls, villas and sleek office buildings. Paris Dimitriades, who likes hanging out in the trendy cafes and restaurants of Limassol, Cyprus' second-largest city, says he still can't believe the economy is tanking. 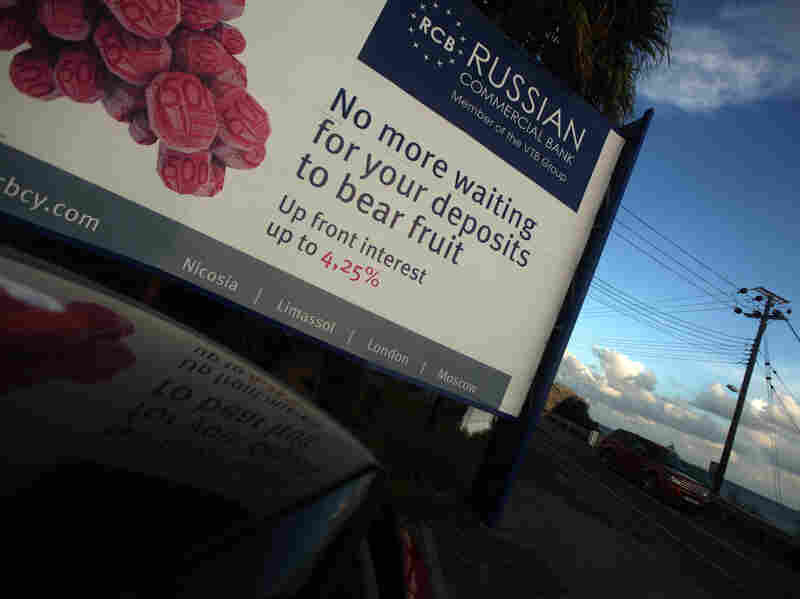 A car drives past a billboard promoting a Russian bank on a main road in the southern Cypriot port of Limassol earlier this month. Russian and Ukrainian investors have a major presence in Cyprus. Patrick Baz/AFP/Getty Images hide caption 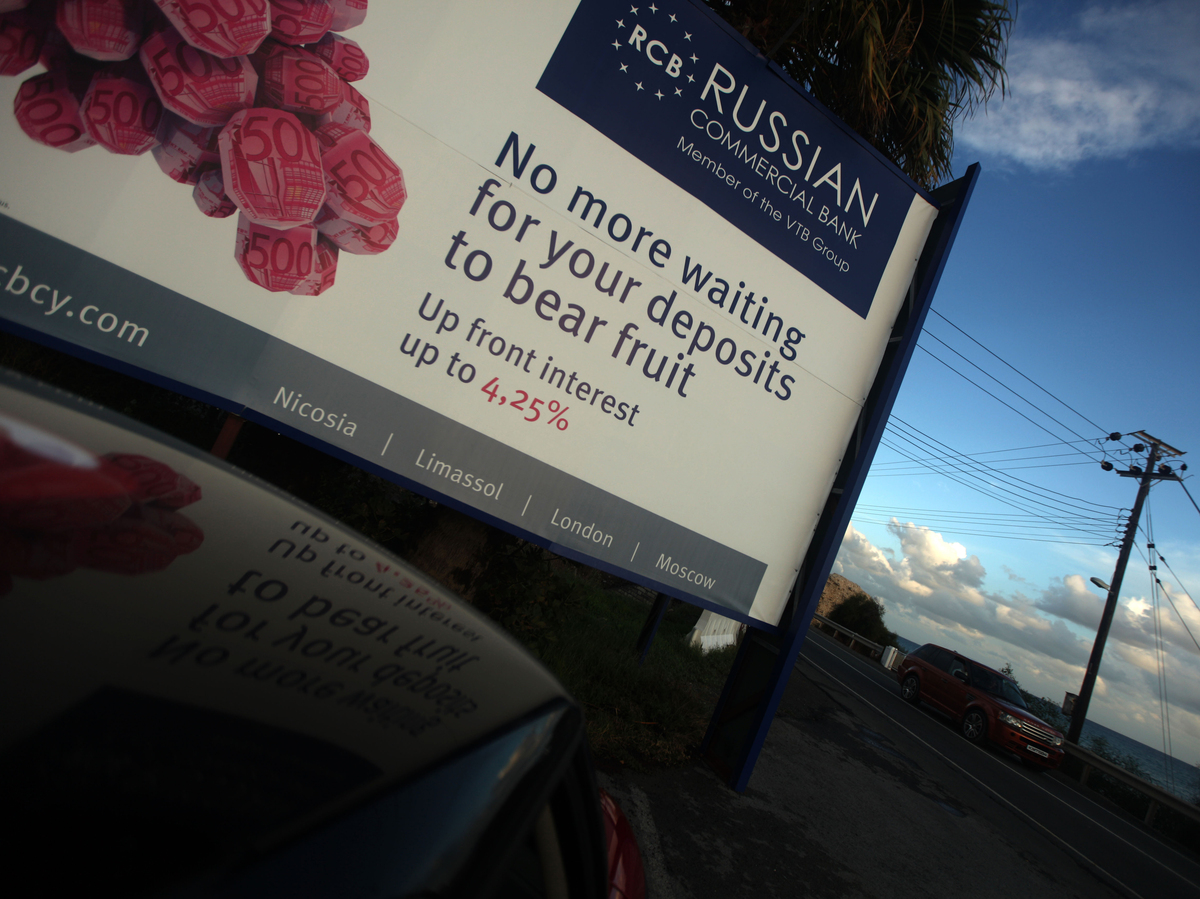 A car drives past a billboard promoting a Russian bank on a main road in the southern Cypriot port of Limassol earlier this month. Russian and Ukrainian investors have a major presence in Cyprus.

"Cyprus had a prosperous economy," says Dimitriades, who works for the EU presidency, which Cyprus currently holds. "It was like one of the most prosperous economies in the EU. That was not an exaggeration."

"There are $22 billion deposited in our banks in Cyprus, primarily from Russia and the Ukraine," he says.

That amount is nearly equivalent to the country's entire GDP. Great Britain, Iran, Israel and China also invest in the island, he says.

Trade relations between the Cypriots and Russians date to Soviet times. Current President Demetris Christofias, the only communist president of an EU nation, was educated in the Soviet Union, speaks Russian fluently and likes to call himself the "red sheep" of Europe.

But Russia's presence is most felt in Limassol, a port city that has Russian restaurants and Russian pop music, a monument to poet Aleksandr Pushkin and city signs in Russia's Cyrillic alphabet.

Marina Snigireva, who's from Moscow, has lived in Limassol for eight years. She works for one of the many Russian offshore companies in Cyprus and says many of them employ Greek Cypriots.

"Imagine if one day Russian business disappeared from here," she says, looking downcast. "I guess it would be a very big tragedy for Cypriots as well."

She says she's also anxiously awaiting the details of the bailout, and how it will affect her business and adopted country.