Accessibility links
Will China's First Lady Outshine Her Husband? She is a wildly popular singer, AIDS activist and major general in the Chinese army. Now, Peng Liyuan is slated to add another title: first lady of China. Peng's husband, Xi Jinping, is expected to become the country's president next year. Military garb has replaced her fabulous costumes as China's image-makers ensure she doesn't overshadow Xi. 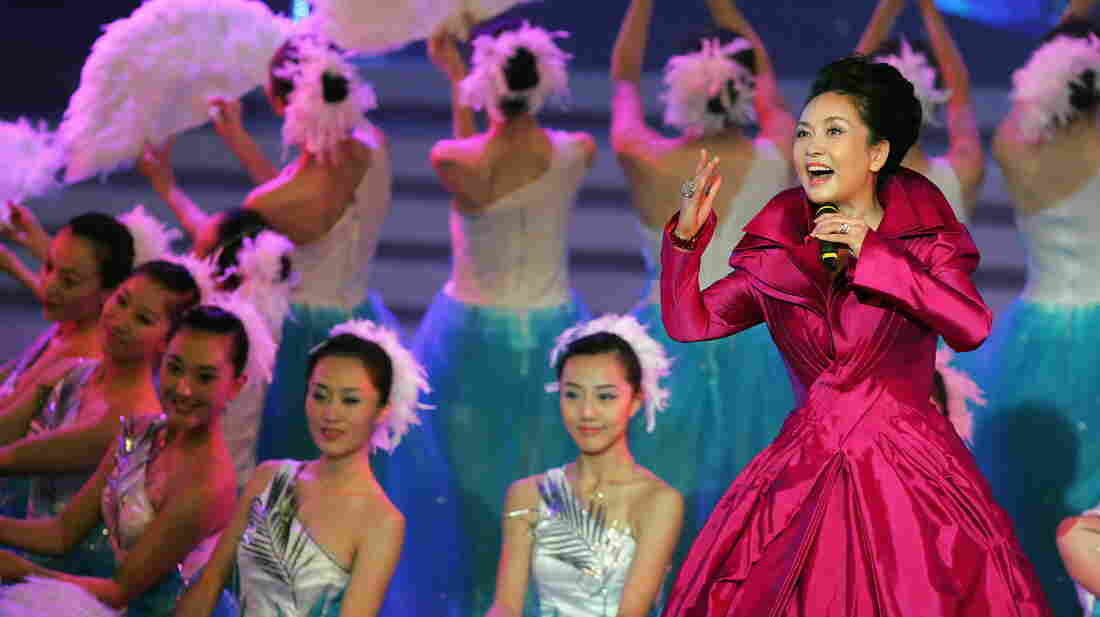 A famous singer, a major general in the army and an AIDS activist, Peng Liyuan is expected to take on yet another role soon: first lady of China. Peng has been married for more than two decades to Xi Jinping, China's newly anointed leader. Xinhua/Landov hide caption

Step aside Michelle Obama and Carla Bruni-Sarkozy. A new first lady could be heading for fame on the global stage — one who's not just a singing superstar and AIDS ambassador, but also a major general in China's People's Liberation Army.

Nicknamed "The Peony Fairy," Peng Liyuan, 50, has been in the public eye for decades, best known for her annual appearances on the most watched television program in the world, the Chinese New Year gala.

She is married to Xi Jinping, who recently ascended to the country's top leadership post. But will China's new first lady be allowed to shine? 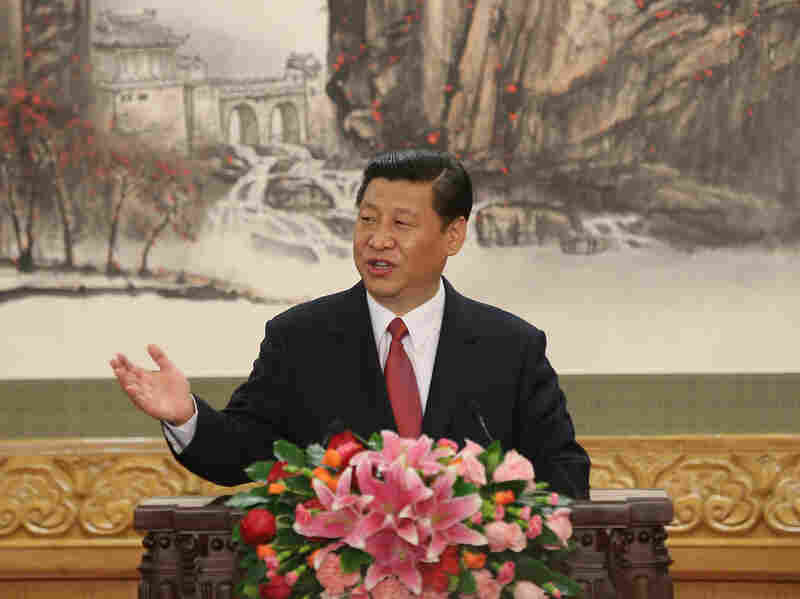 Peng's husband, Xi Jinping, assumed the top leadership post in China's Communist Party earlier this month and is expected to become the country's president next year. The two met in 1986, when she was already a star and he was a deputy mayor. Lintao Zhang/Getty Images hide caption 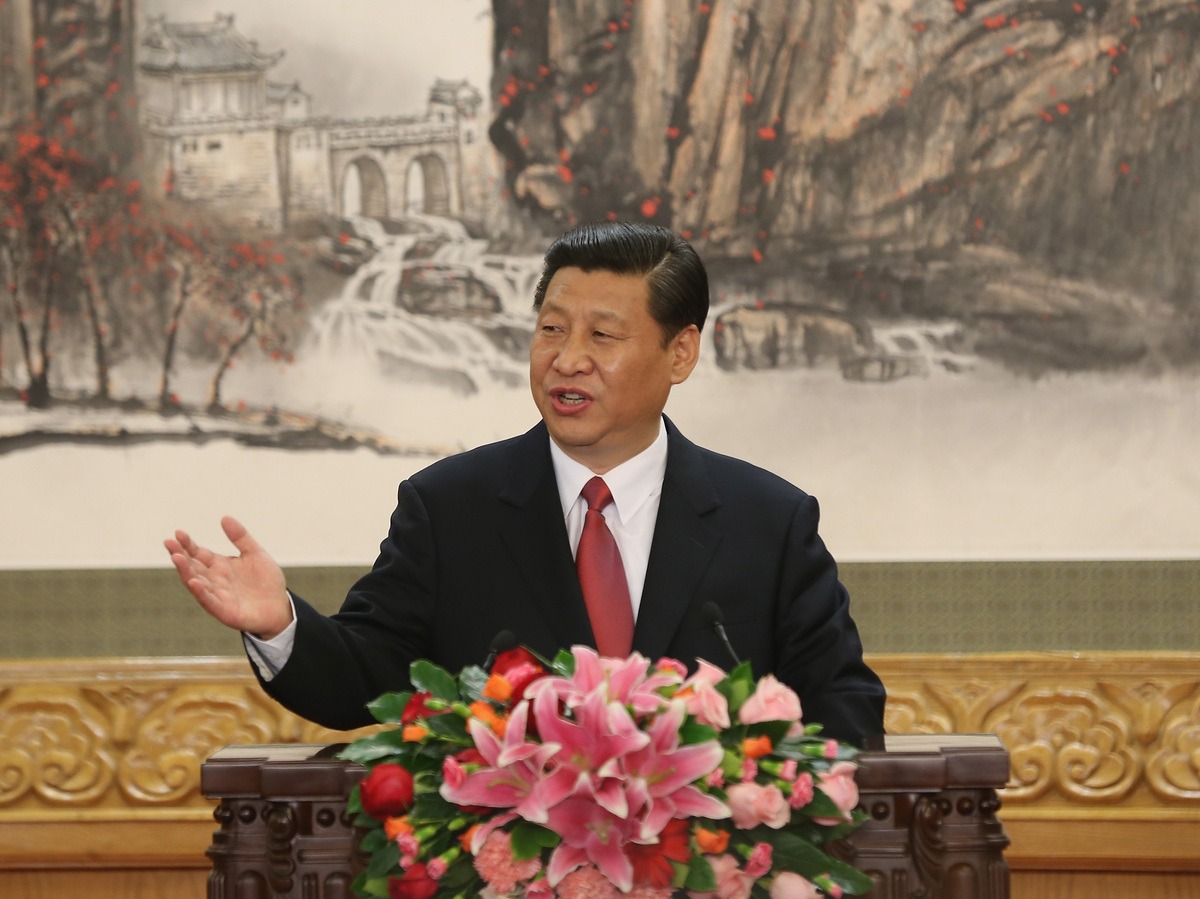 Peng's husband, Xi Jinping, assumed the top leadership post in China's Communist Party earlier this month and is expected to become the country's president next year. The two met in 1986, when she was already a star and he was a deputy mayor.

In an unguarded moment, the glamorous singer told a state-run magazine that when she first met her future husband in 1986, she found him "rustic" and "old-looking." Now 59, Xi was then a deputy mayor of Xiamen in Fujian province, while she was already a star. She said she tested him by turning up in "big army trousers" to see how much he cared about appearances.

Not much, apparently. He's reported as saying it took him just 40 minutes to know that Peng was the woman he wanted to marry. At that point, she could hardly have known her husband would end up as Communist Party general secretary and China's next president.

"My impressions of her are great," says Yan Chang, who met Peng in 2003, after the singer commissioned two songs from Yan's husband, composer Josef Fung. "She's very plain-living. She wears casual, embroidered clothes and likes traditional stuff. She used to come to my house to listen to music and talk about art."

At the time, Peng was at the height of her fame, a household name across China. But she told Fung this was to be her last album.

"She was quite candid about that. She said the leaders were saying, 'You should reduce your public performances now. In the future, you shouldn't really appear at all,' " the composer says. "I couldn't understand why at the time. She said, 'Well, I wouldn't really like to do that. For a certain reason, maybe, yeah, I have to do it.' "

In this song, "Swallow," Peng combines a Kazakh folk song with electronic music.

When it came to the album, she had clear demands for him: For one song, called "Swallow" in English, she asked him to meld a Kazakh folk song with electronic music to produce an avant-garde sound. He says she was keen to push musical boundaries inside China.

"After the CD, she was regretting that she didn't take more risks," Fung says. "She would like to have gone a bit further.

"She has, in a way, a double personality," he says, describing her as a "diva with Chinese characteristics."

"In her private self, she was quite humble. She was very considerate to the people working with her," he says. "On the other hand, you can see a certain power in her. She's sometimes quite critical on other people. But she's a nice person."

The singer is Xi Jinping's second wife, following a divorce. They have one daughter, who studies at Harvard under an assumed name.

Earlier this year, Sarah Lande from Muscatine, Iowa, sat next to Peng Liyuan at an official banquet. She says her impressions were extremely positive.

"She seemed to be alive and beautiful. Eager to talk, you know, eager to discuss things," Lande says. "She spoke some English, and she seemed very interesting. She was saying she doesn't perform much any more, but she works with a fine arts academy."

Peng was already a famous folk singer in China when she met her husband, Xi Jinping. Here, she performs "In the Field of Hope."

Peng's other high-profile role has been as an AIDS ambassador.

"Being asked to do this was the best new year's present I could get," she said in a recorded message about AIDS awareness. She began in 2006, when there was great stigma surrounding HIV in China.

"Definitely from a political standpoint, it was risky," says Johanna Hood at the Australian National University, who has studied Peng's role as one of the first Chinese celebrities to become the public face of an AIDS campaign. "She handled it, I think, very well, in that she never engages with the politics of HIV."

Peng focuses on her role as a mother and her desire to work with children, Hood says.

"I think it's been managed quite well, in what could have been a very risky situation," she says.

In a rare interview, Peng described her motivation as wanting to use her fame to help children who have been affected by HIV and AIDS: "I believe that as a public figure I should use my compassion to open the eyes of other loving people to care for them, to help them, and allow them to escape from that unhappiness and hardship," she said.

Peng's last high-profile performance was in January. She sang "Country," a song celebrating the importance of China's ordinary people to the Communist Party, during the closing act of a military gala.

In June 2011, she stepped up her role, becoming a World Health Organization ambassador for tuberculosis and AIDS — even as her husband was heading for the top. Hood says it would be a loss of face for her to step down now. But China's first ladies have traditionally played a supporting role not much seen in public. So could China be paving the way for a new kind of first lady?

"I really do hope so," Hood says. "[Peng] is an incredibly talented woman. She's very well-educated, she speaks well, she's knowledgeable, she's powerful. And she's one of the perfect people to pave the way for a new role model."

But there is official nervousness about Peng already. Her name has become a forbidden search term on Weibo, China's version of Twitter, and several online stories about her have been deleted recently.

Given China's recent history, Peng's cultural and artistic background doesn't necessarily work in her favor. The last high-profile spouse in recent memory was Madame Mao — or Jiang Qing — the wife of Chairman Mao Zedong who dictated the country's cultural life for a decade, limiting cultural fare to a series of "revolutionary operas" and "revolutionary songs."

Jiang was subsequently blamed for the decade-long Cultural Revolution, and sentenced to a suspended death sentence as a member of the "Gang of Four." She committed suicide in prison in 1991, but her legacy is one that hangs over all subsequent first ladies, consigning them to the background.

It's also clear that China's image-makers have already been at work. Gone are Peng's fabulously froufrou and brightly colored outfits. Most of her recent appearances have been in military uniform.

Her most recent high-profile engagement was at a military gala in January, singing about the importance of ordinary people to the Communist Party. It's notable that Peng hasn't yet had any major joint engagements with her husband; given her popularity among those ordinary people, perhaps there's a fear she could outshine her husband, who formally became the Communist Party leader earlier this month.