Accessibility links
Fresh Air Interview: Robert Malley Robert Malley, a program director for the International Crisis Group, analyzes the complexity of the situation in the Middle East, a region where conflicts interconnect and expand upon one another. "These alliances," says Malley, "are not clear cut ... they are alliances of convenience."

Writing for the New York Review of Books at the beginning of November, Robert Malley, the program director for the Middle East and North Africa with the International Crisis Group, and Hussein Agha described the current situation in the Middle East:

Alliances are topsy-turvy, defy logic, are unfamiliar and shifting. Theocratic regimes back secularists; tyrannies promote democracy; the U.S. forms partnerships with Islamists; Islamists support Western military intervention. Arab nationalists side with regimes they have long combated; liberals side with Islamists with whom they then come to blows. Saudi Arabia backs secularists against the Muslim Brothers and Salafis against secularists. The U.S. is allied with Iraq, which is allied with Iran, which supports the Syrian regime, which the U.S. hopes to help topple. The U.S. is also allied with Qatar, which subsidizes Hamas, and with Saudi Arabia, which funds Salafis who inspire jihadists who kill Americans whenever they can. 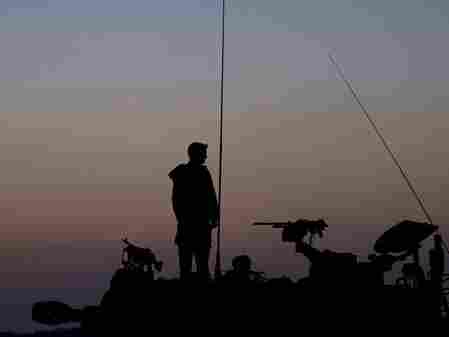 After a week of recent fighting between Israel and Hamas, an Israeli soldier stands on top of a mobile artillery unit in a position near the Israel Gaza border. Ariel Schalit/Getty Images hide caption

Malley and Agha, a fellow at St. Anthony's College, Oxford, wrote this, too, before the latest fighting between Israel and Hamas, and before President Morsi's recent power grab in Egypt. Elaborating on the ever-increasing complexity of the situation in the region, Malley tells Fresh Air's Terry Gross that if there is ever going to be a lasting peace between Israel and Palestinians, Hamas and Fatah will have to join ranks in the interest of their shared aim of independence.

That, he says or, Israel will deal separately with Fatah in the West Bank and Hamas in Gaza, creating not a two-state solution but a patchwork that is today more in tune with realities on the ground, but less likely to promote a permanent peace settlement.

Malley says that the situation in the Middle East is one of the more things change, the more they stay the same, and that the U.S. is facing many of the same dilemmas it faced a decade ago, only with different actors.

"I don't know a single case of a national liberation movement that has succeeded, that has been able to act effectively on behalf of its people, when it was divided. One of two things always happens: Either one branch of the national movement eliminates the other ... or they find a way to get along and to at least unify their ranks for the purpose of resolving the conflict and achieving independence. I think at this point it's inconceivable that Fatah will eliminate Hamas, and I can't see that Hamas is going to eliminate Fatah, so the only solution if what you want — if what people want — is to see a meaningful negotiation between an empowered Israeli government, a representative Israeli government, and an empowered and representative Palestinian national movement, the only way to do that is for Palestinian ranks to unify. Now, they're going to need to unify on a platform that is compatible with peace, but they're going to need to unify if what we want is a negotiated settlement."

On the delicate balance the U.S. must strike between satisfying our national interests in the Middle East and respecting basic human rights

Obama and Netanyahu Stave Off Another 11th Hour Moment...For Now
This Is Not A Revolution
Does Gaza Ceasefire Address Long-Term Goals? Nov. 23, 2012
Renewed Violence In Gaza A Test For New Leaders Nov. 17, 2012

"I think the U.S. now is caught in that age-old dilemma that we thought we might have escaped with the Arab uprisings. We had the same problem with Mubarak and we still have the same problem with a number of leaders in the region: So long as they satisfy our interests when it comes to basic strategic needs (and, in particular, the relationship with Israel), are we or are we not prepared to excuse what they do at home? During the Mubarak era we did it and then when he was overthrown we said mea culpa, we made a mistake, we should never underestimate what's happening domestically because it plants the seeds of future instability and we shouldn't be prepared to trade those respects for basic democratic and human-rights rule at home for the sake of our strategic interests in the region. ... Well, here we are a year and a half later, exactly the same dilemma. ...

"It's understandable that ... right now for the United States the priority is to keep the cease-fire in place, make sure that relations between Egypt and Israel remain relatively solid, make sure that Egypt takes steps now to prevent the smuggling of weapons into Gaza. Otherwise the cease-fire might unravel. Now, if that means we have to temper our criticism a little about what they're doing at home, well, maybe that trade is worth it. I can understand it, and I suspect that if I were sitting in the administration ... I might reach the same conclusion, but from an outsider's perspective, it looks so much like what we used to do and which we said we would not do again that it raises serious questions."

"In some ways, the region is topsy-turvy and it preceded what happened in Syria. Syria is bringing it really to light [that] all the alliances — or so many of the alliances that we were familiar with — are things of the past, and this is something that I think the United States is going to have to cope with and deal with. ... In Syria, you have obviously countries that are theocratic countries ... like Saudi Arabia ... that are certainly far from being democratic ... that are on the side of those who are rising up against President Assad, but they're also supporting the Salafists in Syria, who are not rising up for the sake of democracy, but for a very different purpose. ... Then you have a country like Iran which is backing not just a secular regime or semi-secular regime in Syria, but one that has repressed its own Islamists, but backing it because of an age-old alliance between those two countries, and you have an organization like Hezbollah...which is backing the regime in Syria even though its former ally in this axis of resistance against Israel, Hamas, is opposing the regime.

"So, I think, the fault lines have become slightly clearer but they're fault lines that are not democrats versus non-democrats. Although many Syrians are rising up because they want to change the nature of the regime, the fault line is very much Sunni against Shiite; it's Persian-Iranian against Arabs. That's why a number of these alliances seem to us at least as Americans quite unnatural. ... The region has become really a smorgasbord in terms of its alliances, and ... something this unnatural just can't end well because these alliances are not clear cut, they don't make sense in terms of the political logic, they are temporary alliances, they are alliances of convenience."

"This is a revolution and it's not a revolution. It's all kinds of things, games within games. Yes, there is a sense of a popular uprising of people who are profoundly ... dissatisfied with their economic conditions, with the sense that they were being ruled by unaccountable autocrats, with the sense of deepening corruption of a regime that was narrowing with people who were not just exploiting the masses but exploiting parts of the elite in order to monopolize more of their economic power, and of countries who have lost all sense of dignity because they didn't have any role on the regional scene. So there is that, but there is so much else, as I say: There are games within games ... there's a Sunni-Shite confessional clash, there's a newly minted cold war ... between the United States and Russia when it comes to Syria in particular. ... So, so much is happening all at once that it's hard to choose one term and to describe it as a 'revolution' or as anything else."