Accessibility links
From 'JK' To 'Eye Gunk': Taking U.S. Slang To China One of the most well-known American women in China is someone many Americans have never heard of. Jessica Beinecke is host of OMG! Meiyu, an English-language learning Web show produced by Voice of America. Her offbeat videos have racked up more than 15 million views over the past year. 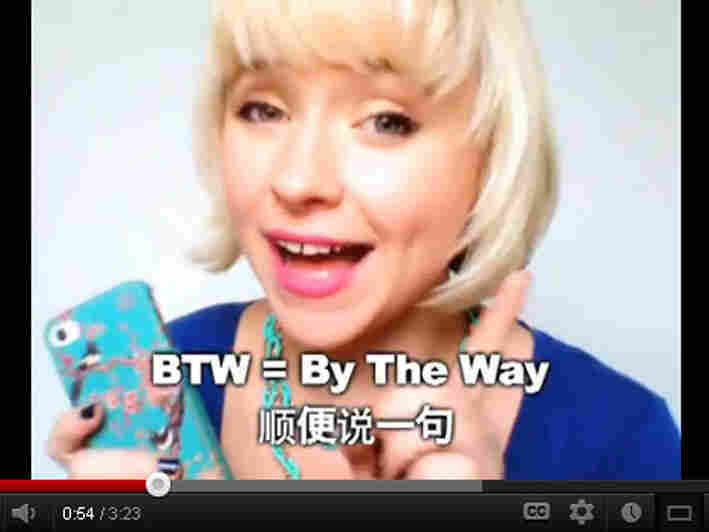 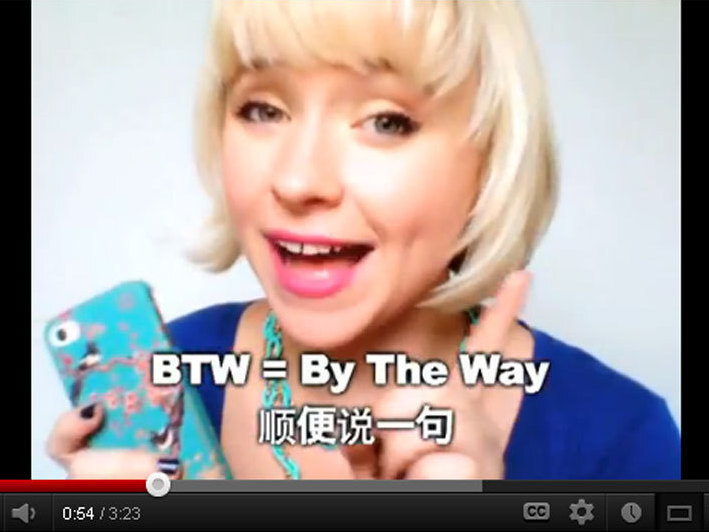 In one video on her hit video blog OMG! Meiyu, Jessica Beinecke teaches slang terms like "BTW," "JK" and "whatev."

One of the most well-known American women in China is someone many Americans have never heard of. Jessica Beinecke is host of Voice of America's OMG! Meiyu, an English-language learning Web show that teaches American slang expressions to Chinese students.

Beinecke's fun, offbeat videos have racked up more than 15 million views over the past year — on YouTube and other Chinese social media sites.

"American English slang can be pretty ... funny at times," she tells NPR's Neal Conan. "But sometimes it's fun to see how we can juxtapose American culture and Chinese culture to help everyone understand it a little bit easier."

Each week, Beinecke asks followers on Weibo — the Chinese version of Twitter — what words or expressions they would like to learn. She gets hundreds of responses each time, leading to her explanations of expressions like "eye gunk," "big mouth" and "raining cats and dogs."

"They get a lot of access to American culture," she says, "but we just sort of help them make sense of it and pick out some key words that young Americans actually use on a daily basis."

During Thanksgiving week, Beinecke explained phrases like "stuffing your face," and different uses of the term "gobble" — gobbling up food versus the sound that the turkey makes.

In the segment "Yucky Gunk," Beinecke explains "all of the icky stuff that comes out of your face." It garnered a combined 1.5 million hits on various sites.

The show began running in July 2011, and since then has become a breakout star in China and even has a fan club based in Beijing.

"I try to make it a little more fun and engaging, because if you're singing and dancing along with Bai Jie, you don't really feel like you're learning, you feel like you're playing," she says. "So I think that also ... adds to our popularity."