Accessibility links
Movie Reviews - 'The Collection' - A 'Collection' Of Horror's Goriest Tropes The Collection, a sequel to 2009's The Collector, dives back into the world of a serial killer and his growing body count. Critic Ian Buckwalter says it's self-aware of the genre's indulgences — and unlike in most horror franchises, the open ending is its strongest feature. 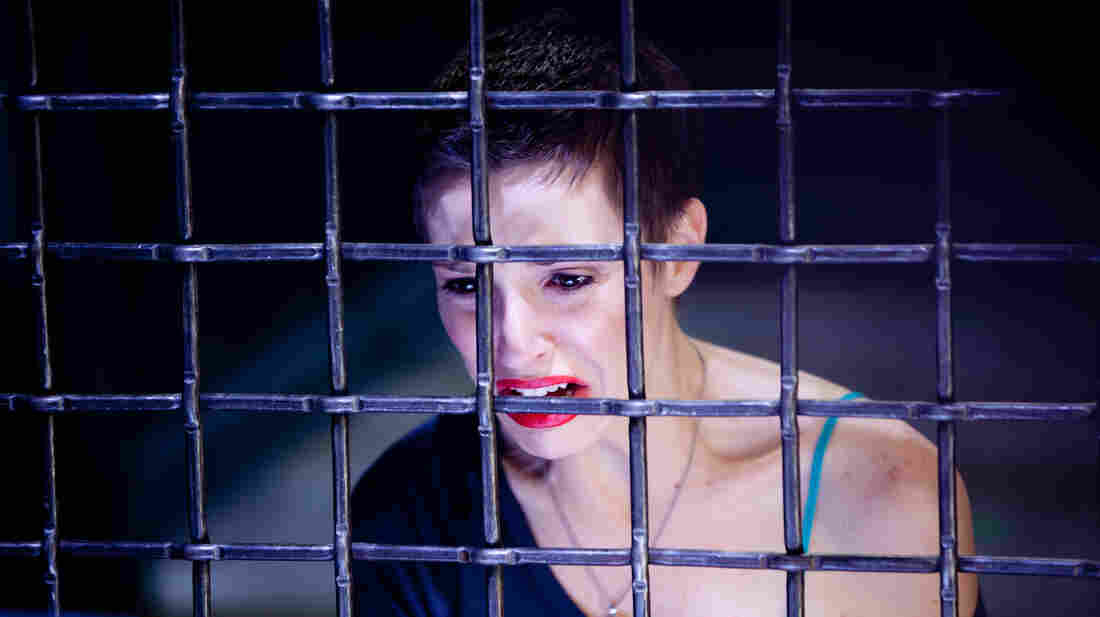 Elena (Emma Fitzpatrick) is captured by a serial killer known as "the Collector" and must fight for her life to escape. Bob Mahoney/LD Entertainment hide caption 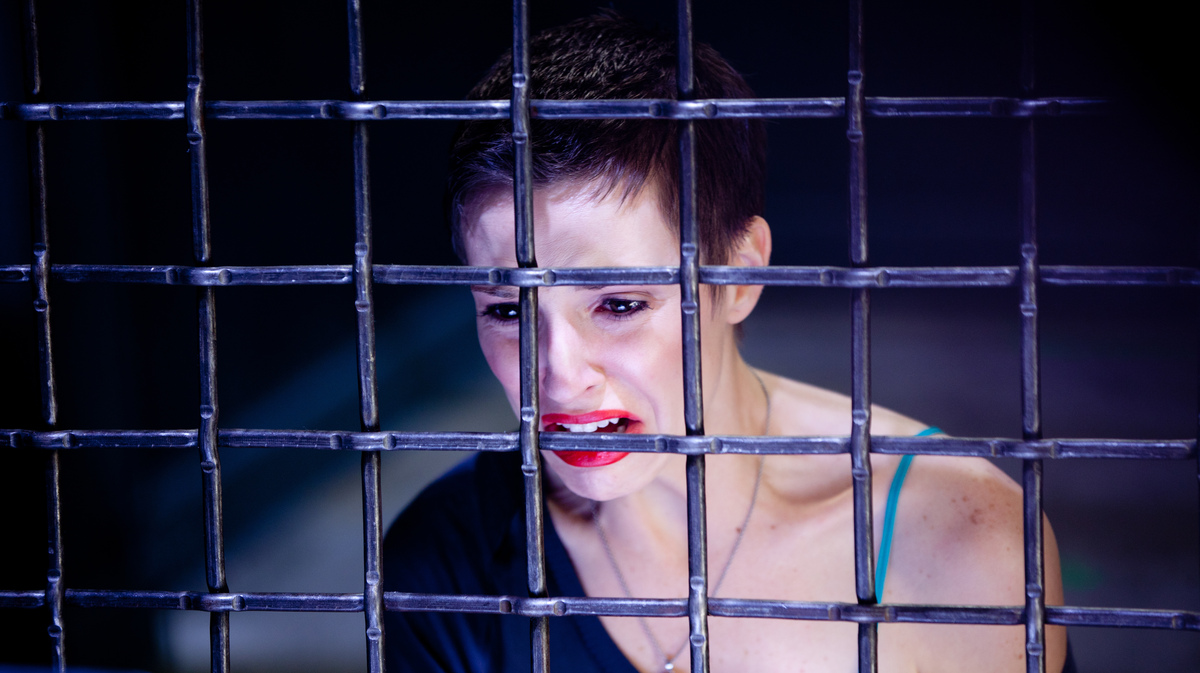 Elena (Emma Fitzpatrick) is captured by a serial killer known as "the Collector" and must fight for her life to escape.

For those who had come to dread yet another installment of the Saw series and its ilk — not out of fear, but from boredom at the films' dull repetition of elaborate torture and murder methods — 2009's The Collector was a breath of if not fresh, then at least less stagnant air.

Coming from the creators of the latter Saw installments, and originally intended as a prequel (an idea they thankfully ditched), the film did include some of the same grisly spins on Rube Goldberg-inspired slaying. But they'd been couched within a sly and intermittently effective inversion of Home Alone, with a home invader setting the tripwires and booby traps. The film was still a fairly generic gore fest, but it built enough of a cult following to justify the similarly low-budget sequel that its open end demanded.

For the follow-up, writer-director Marcus Dunstan and co-writer Patrick Melton treat their original as if it were their Alien. The first film left their hero Arkin (Josh Stewart) not unlike Ripley in that series, confined in a small space and heading for points unknown. Only in this case, that space is a footlocker instead of a hibernation chamber, and instead of defeating the villain, Arkin has been trapped in that footlocker by The Collector's answer to the alien: the unnamed "Collector," a diabolical, black-masked psycho with a taste for killing whole families and taking one away alive as his trophy.

Following that template, Arkin returns in The Collection, after escaping at the start of the film, to lead a band of mercenaries to the villain's labyrinthine lair on a rescue mission — again, just as Ripley does in Aliens. Just in case you were in danger of missing the connection, they even include a scene in which Arkin briefs the soldiers on their adversary before maintaining that he's only there for informational purposes, not to take part in the mission, just as in a nearly identical scene in James Cameron's film.

The homage is ham-handed, but the result is surprisingly fun. Just as Aliens was an action companion to the gothic horror of its predecessor, The Collection also effectively blends genres, with this team of commandos getting stuck in the hotel that the Collector uses as his home base-slash-personal museum of macabre oddities fashioned out of spare body parts. They'll need to fight their way out, of course — along with Arkin, who inevitably gets dragged in along with them.

Their objective is Elena (Emma Fitzpatrick), a young woman captured into the collection in the film's opening sequence, which finds the Collector ambitiously doing in an entire underground rave crowd with what amounts to a giant, ceiling-mounted thresher. Yes, it's just as splattery as it sounds. 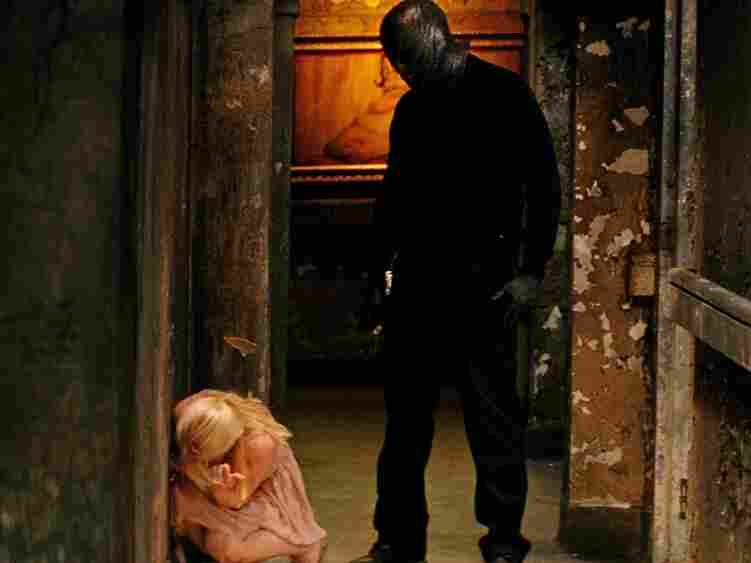 That underlines an important point: despite its willingness to step back from genre norms and its nicely paced thrills, don't mistake The Collection for a crossover success. If you have an immediate dislike for horror movies that order their stage blood by the barrel, this isn't the film for you.

But genre aficionados are likely to revel in every crunched bone, gratuitous decapitation and slow-motion iron-maiden impaling. The Saw films and their like plod grimly from one kill to the next, but there's an energy to The Collection that enlivens it. It might seem odd to describe anything this ghastly as playful, but one gets the sense that Dunstan recognizes the excesses of the film and is having fun with them. The way he frames the Collector as he bursts into a room at the film's climax — with double doors opening on him, bathed in dramatic light, wielding an assault rifle and flanked by attack dogs — is too self-consciously over-the-top to be anything but an acknowledgement of its own ridiculousness.

It should come as no surprise that the ending leaves things open for yet another sequel. That's normally where the groans come in during the twist of a generic horror's waning moments. But in this case, it may be the movie's strongest moment. Rather than serving up a standard-issue open ending, Dunstan allows The Collection a sense of closure while suggesting an interesting turn in the structure should things continue. If he can continue to churn out enjoyably trashy sequels like this, franchised horror doesn't always have to be such a killjoy.