Accessibility links
The NFL's New Target Demographic: Kids The National Football League could coast nicely on its colossal audience. But as NPR's Elizabeth Blair reports, execs have turned their attention to the nation's children, targeting them with NFL Rush Zone: Season of the Guardians, an animated TV show co-produced with Nickelodeon. 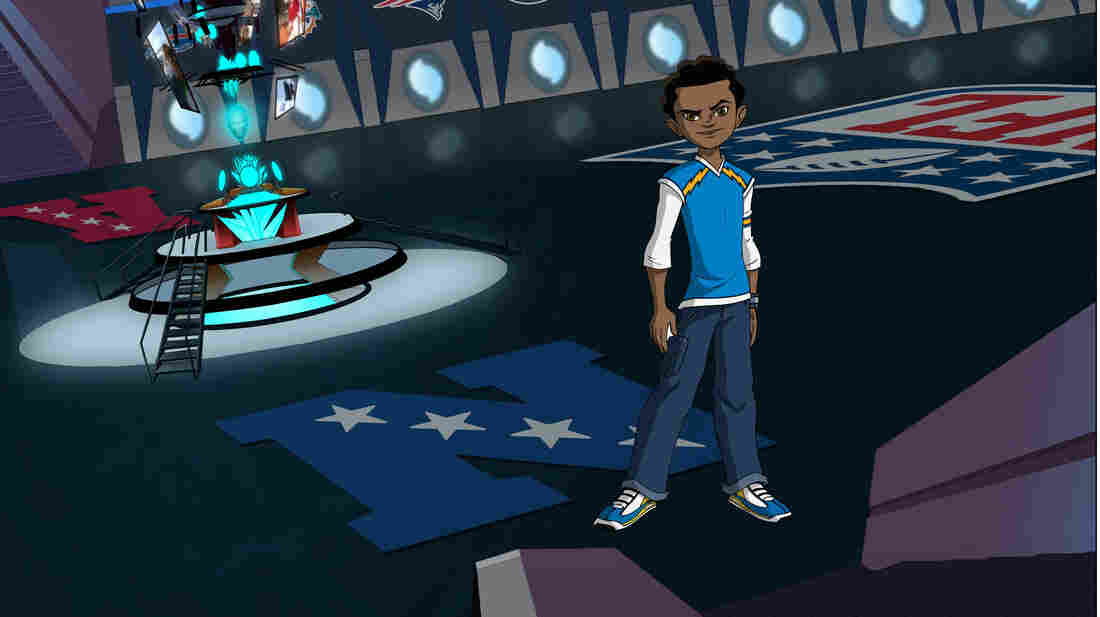 Eleven-year-old Ish Taylor is charged with protecting the NFL — and the world — from a scheming supervillain in NFL Rush Zone: Season of the Guardians. Nickelodeon hide caption

When the NFL wants to make a play for a particular demographic, they go long. To attract Latinos, it forged partnerships with Univision and Telemundo. To keep women happy, it came out with a clothing line featuring shirts that actually fit better than those boxy jerseys.

Now, to engage children, the NFL is going where kids go: Nickelodeon. NFL Rush Zone: Season of the Guardians is a new series rolling out Friday, co-branded by the NFL and Nicktoons.

The hero is 11-year-old Ish Taylor, who lives in Canton, Ohio — conveniently home to the Pro Football Hall of Fame.

Peter O'Reilly, the NFL's vice president for fan strategy and marketing, says Ish and his friends are superheroes called "guardians."

"They've really been tapped to — with special powers and special responsibilities — to protect football and the world from the evil forces that are out there," O'Reilly says.

Stars of the NFL show up: Drew Brees of the New Orleans Saints, DeMarcus Ware of the Dallas Cowboys and Calvin Johnson of the Detroit Lions.

The NFL is a powerful brand, and Nickelodeon is clearly thrilled it was picked. A Nickelodeon press release boasts that this is the first time a major sports league has partnered with a cable network to create an original series.

Keith Dawkins, a senior VP at Nickelodeon, says the two companies came together because they recognized a common goal.

"They wanted to see if there was a different kind of way that they could tap into a fan base at a young age — 6, 7, 8 years old — and create these lifelong fans of the NFL. For us, [our interest is] the Nicktoons network — all animation, all the time, [a] 24-hour network really focusing on boys 6 to 11 — so that's when we realized there was a common sweet spot there," Dawkins said.

Rohit Bhargava, a marketing consultant and author of the book Likeonomics, says it's "a great idea that's starting to get its legs."

"The NFL is one of those few brands you can look at and say, you know what, they know what their brand and the media platform for their brand is going to look like in 10 years," he explains. "And a lot of brands don't have an answer for that."

But as a parent, Bhargava says the NFL should also address the real dangers of football.

"Just the safety of playing football, [given] the discussion around concussions and kids playing football. And so I think this effort to kind of involve children in the NFL, but also to think about the role for football for kids in a responsible way, is going to be a huge thing for the NFL moving forward," Bhargava says.

Ish — the hero of NFL Rush Zone — plays pee-wee football, but injuries are the least of his problems. He's got 32 NFL teams to protect from evil villains with names like Wild Card and Sudden Death.