Accessibility links
Street Art Brings Life To A Miami Neighborhood Just a few years ago, Miami's Wynwood was known as a rough neighborhood of warehouses and shoe factories. Today, it has become the center of Miami's art scene, known for its galleries, studios and street murals. Many attribute that transformation to the work of developer Tony Goldman.

One of the nation's largest art fairs, Art Basel, opens this week in Miami. But days before the fair launches in Miami Beach, the party had already started across the bridge, in Miami's Wynwood neighborhood.

At a trendy lounge and art gallery, a couple of hundred people are watching artists at work. The event, sponsored by Heineken, features six street artists putting their own spin on the beer maker's logo. Heineken also commissioned the artists to paint a series of murals on buildings in Wynwood, a neighborhood now famous for its street art. In fact, street art has become so common that some artists say finding good wall space can be difficult.

"For Basel, I started looking for my walls as early as last February," says Trek 6, who prefers to be called a writer — as in writing graffiti — rather than a street artist. (Though he doesn't like the term "graffiti" either.)

Trek 6 started putting his art on walls in Wynwood back when it was a rough neighborhood of warehouses and shoe factories. Over just a few short years, and with help from Art Basel, it has become the center of Miami's art scene, known for its many galleries, studios and street murals.

"I saw this get transformed from a place where you don't want to ever get caught ... to a place where now everybody at all hours of the night with family and everything are out here looking at murals, going into alleys, looking for artwork," he says.

For those who come to Wynwood for art, the first stop is often a grassy courtyard with walkways, tables and a restaurant surrounded by 40 large, colorful, arresting murals. It's called Wynwood Walls, a public art space created by developer Tony Goldman, who died earlier this year. 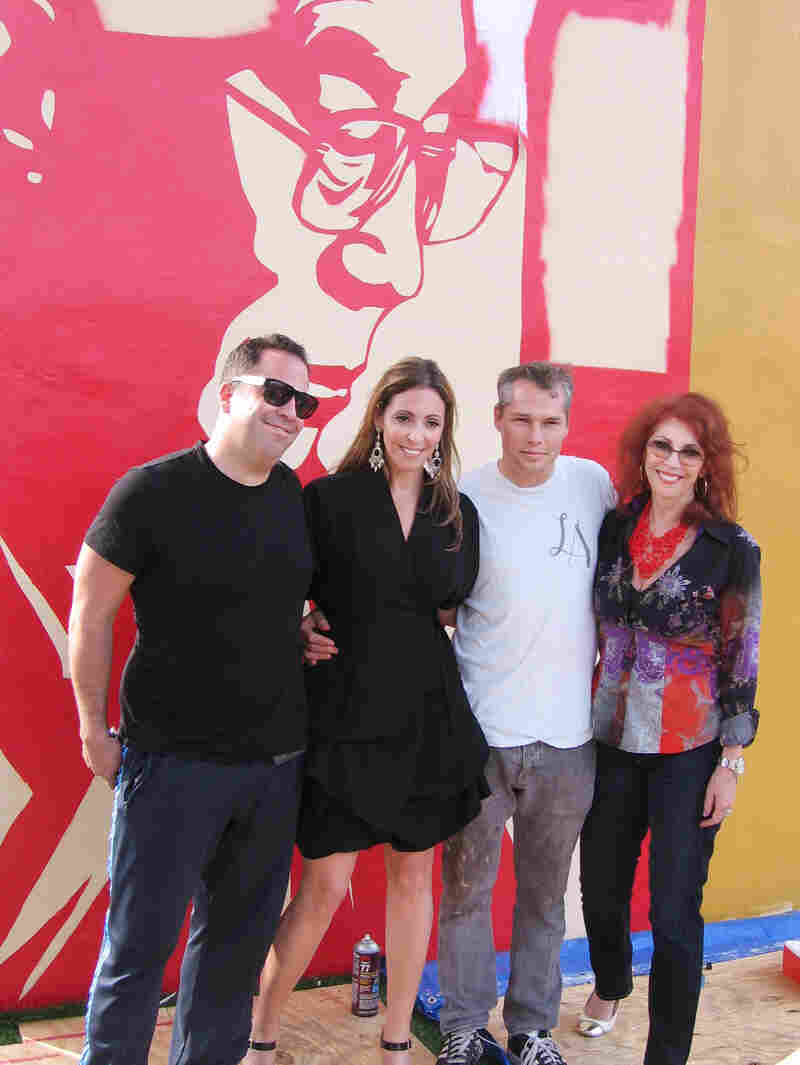 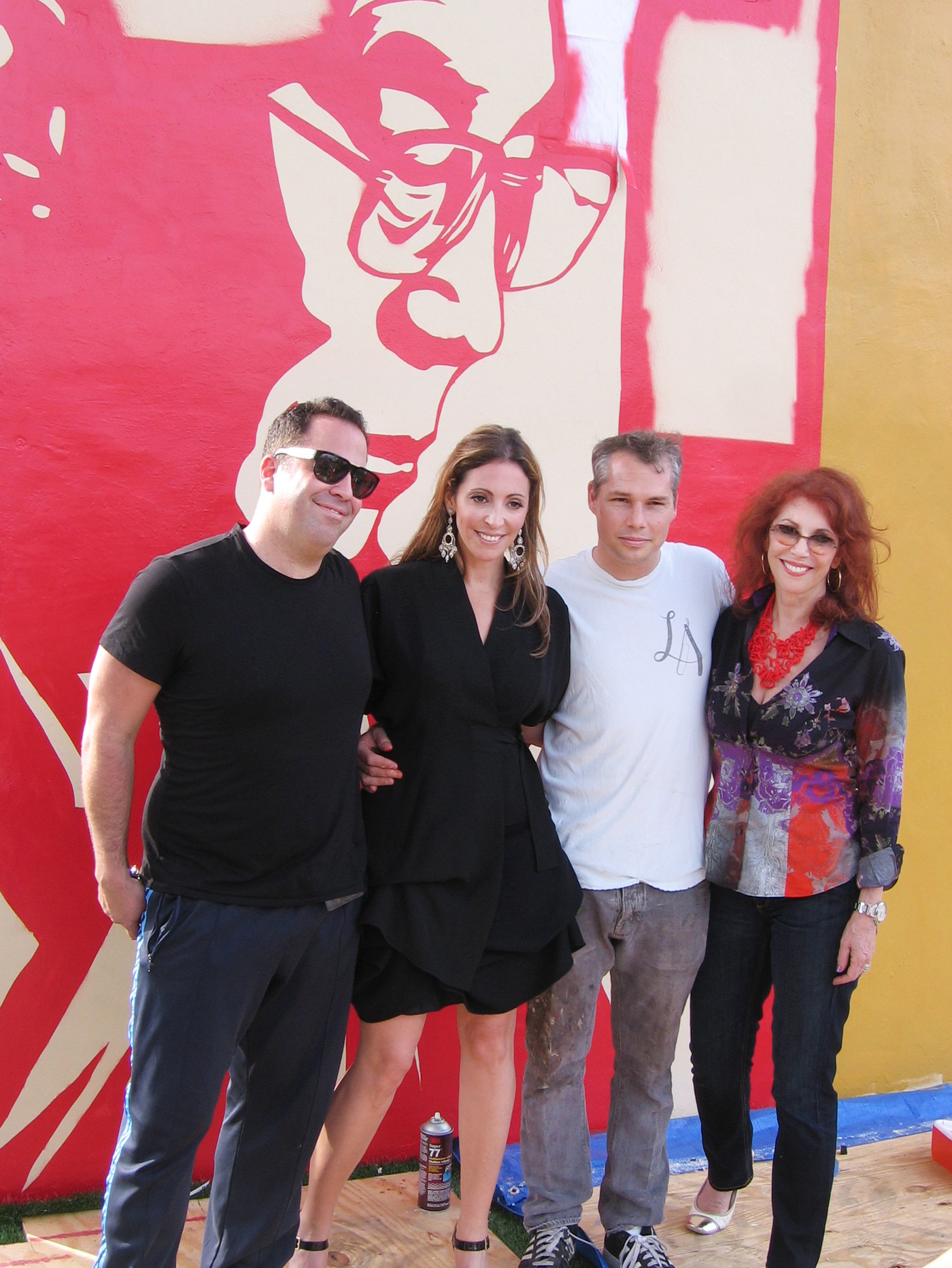 "You feel the breeze in your hair and it's not intimidating," Goldman Srebnick says. "You can see children running around or you can see people with sketchbooks sitting on the grass and sketching something that inspires them."

But art was here long before Wynwood Walls. Two well-known private art collections have public galleries in the neighborhood and, as Tony Goldman used to say, street art is in the community's DNA. Unlike SoHo or South Beach, Wynwood's architecture isn't particularly remarkable, but the blank walls of the neighborhood's boxy warehouses and factories did draw artists to the area. Goldman's idea was to use art to help promote the neighborhood. He took a gravel parking lot between some of his buildings, planted it with grass, prepared and lit the walls, and then invited great street artists in to collaborate.

Many of the walls are repainted after a year or two, but Goldman Srebnick says some of the murals are so distinctive and powerful that it's hard for her to imagine replacing them. Ron English's mural is one of those. It's a painting of giant toy creations in bright greens, reds and blues. The colors appear to bleed off the wall onto the pavement and nearby rocks.

"It's kind of something where you would close your eyes and you could imagine this whole image of beautiful color and vibrancy and energy and kind of wacky creativity," Goldman Srebnick says.

There's also a mural by Shepard Fairey, who's best known for his iconic Obama "Hope" poster. Fairey revisited Wynwood in the weeks before Art Basel to repaint a mural of his that was deteriorating. At the center of his new painting, there's a portrait of Tony Goldman, whom Fairey refers to as a friend and supporter. He says Goldman was someone who appreciated the value of creativity.

"Creativity is a really important part of making communities vital, and the ripple effect from what Tony's done here in Wynwood is extraordinary," Fairey says. "I think the whole neighborhood owes a ton to Tony for having that vision."

Throughout Wynwood, in an area that just five years ago was desolate, there are now galleries, coffee shops, restaurants and visitors. And much of it, Goldman Srebnick says, is because of the seeds her father planted with Wynwood Walls.

"Anyone that has this passion and excitement for creativity, they want to come here," she says. "And I think that Wynwood is really kind of settling into its personality."