Accessibility links
A Battle For The Stolen Childhoods Of Kenyan Girls Early marriages and the sex tourism trade are grave threats to girls growing up on Kenya's Swahili Coast. Families often sell their daughters into marriage; others push them into prostitution. A coalition of educators, religious and traditional leaders is fighting back. 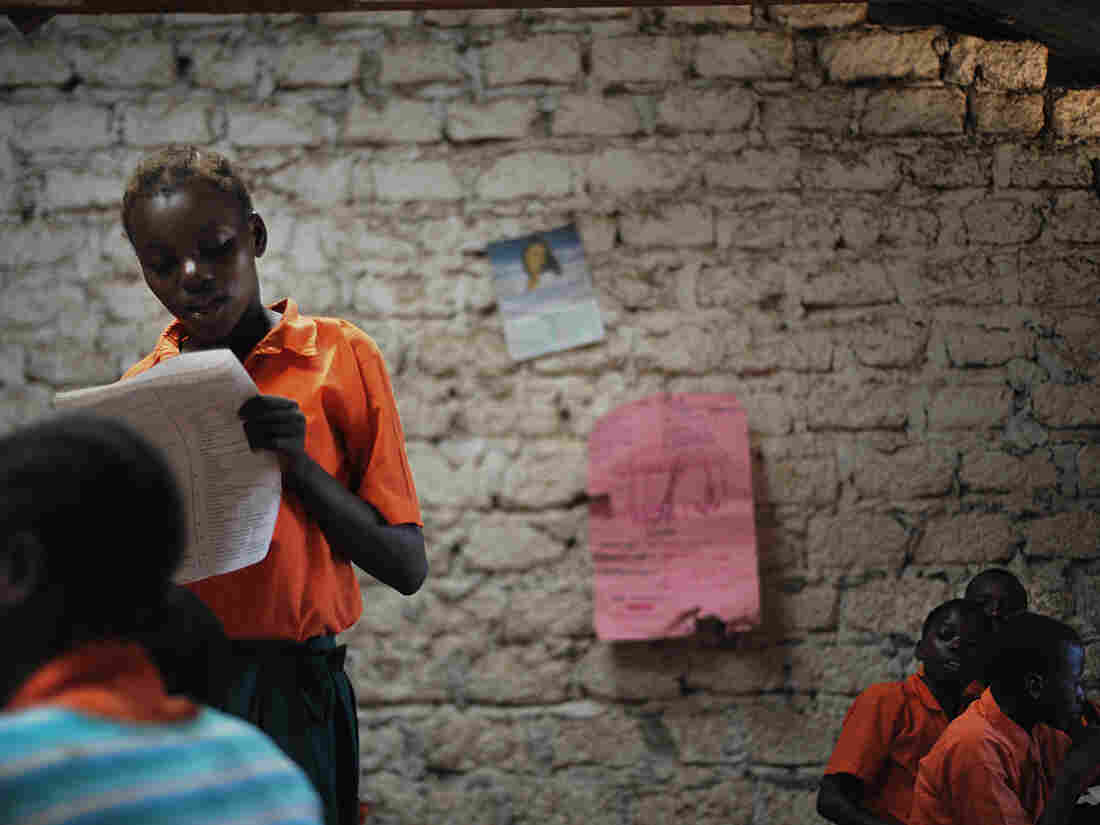 A schoolgirl participates in a lesson in Kilifi, about 30 miles northeast of Mombasa on Kenya's Swahili Coast, in 2010. Tony Karumba/AFP/Getty Images hide caption 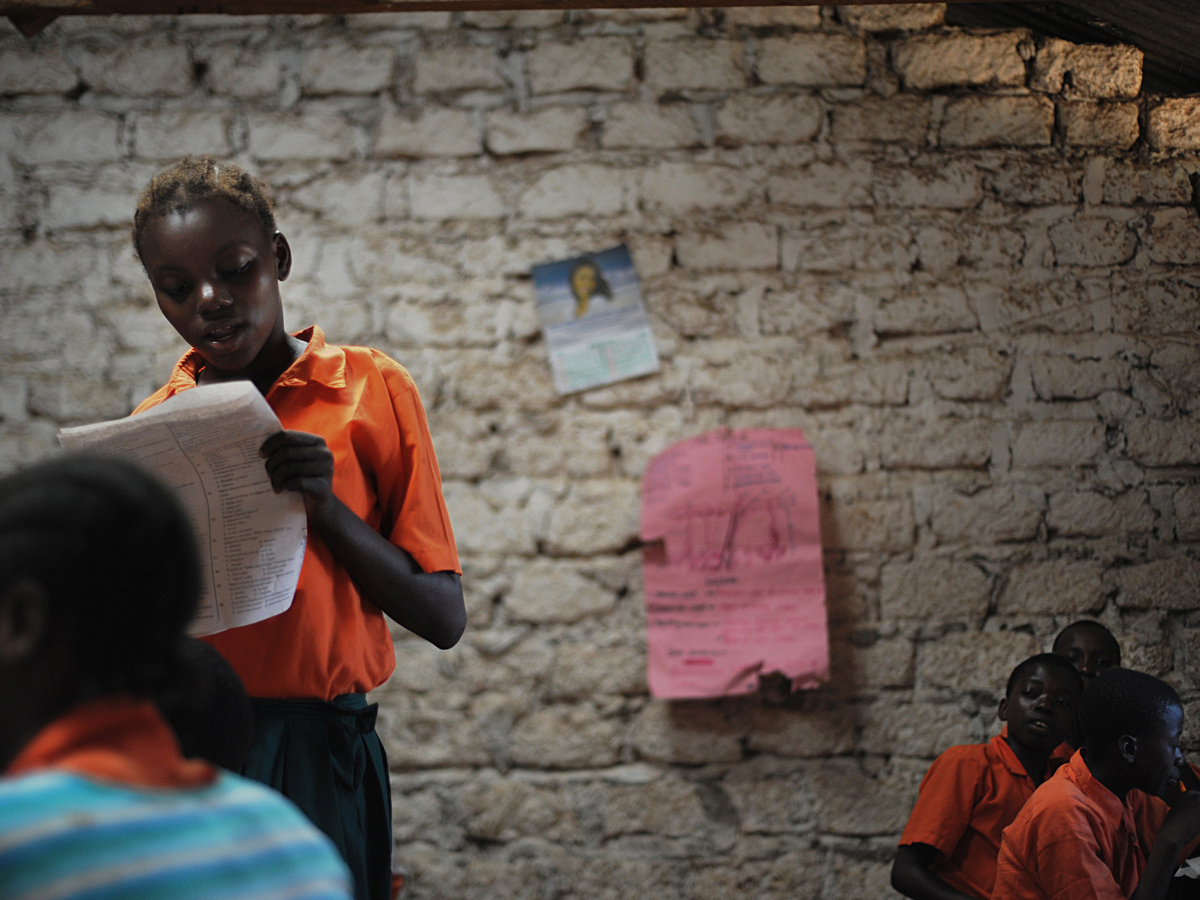 A schoolgirl participates in a lesson in Kilifi, about 30 miles northeast of Mombasa on Kenya's Swahili Coast, in 2010.

Life can be especially cruel for girls growing up on Kenya's Swahili Coast. Some families sell their daughters to earn the bride price, while others encourage them to become child prostitutes for tourists. The girls drop out of school and have babies, and their childhoods are stolen. Now, a coalition of educators, religious and traditional leaders is fighting back.

Thirteen teenage girls — all with babies on their laps — are gathered around a table in the town hall of Msabaha village, not far from the beach resort of Malindi.

Dhahabu Lazima, 17, was just 13 years old when her father ordered her to marry.

Poverty is actually the driving force. Our cultural values are being seriously eroded.

"I was in class 4 then, when he married me off," she says. "I was very angry with my father for using me as a tool to get money, in a marriage that I really suffered."

"I tried talking to him before I went to the husband's place. I told him, 'Father, I want to go through education, I want to learn,' but he wouldn't listen to me," Lazima continues. "He told me, 'If you don't go, I will curse you.' So that is what I feared and I had to get married. I feared getting cursed by my father."

Across the table, 18-year-old Janet Reheme wears a T-shirt that reads "Sweet Baby." Her infant son is transfixed by a microphone.

She says her family had no income, and they needed to pay school fees for her siblings. She was 15 when her mother sold her to an abusive 28-year-old man to be his wife.

In many places in the developing world, where tribal tradition runs deep, as soon as a daughter reaches puberty she is considered ready for marriage.

Along Kenya's Swahili Coast, where the warm Indian Ocean greets the continent's powder-white beaches, some families now encourage underage girls to sell their bodies to male tourists to earn money. The arrangement is what a girl calls mzungu wangu — "my white foreigner" in Swahili.

On the coast, brokers for sex tourism are called "beach boys," because that's where you find them. At a local tavern, a woman in a tight T-shirt chats with a beach boy nicknamed Rasta to see if he has any clients for her.

Rasta laughs easily and tucks his dreadlocks under his marijuana-leaf hat. He has agreed to discuss his trade.

"Most of the tourists ... like the teenagers, the young ladies," he says.

One Italian man always requests young girls, he says, and offers to pay more for them. But Rasta says he has two daughters himself, and he will not procure underage prostitutes for tourists. He sends them to other beach boys who will.

Within the Giriama ethnic group, on Kenya's coast, pushing young girls into early marriage or sexual activity is often passed off as merely the "tradition" of an underdeveloped, uneducated people.

A project spearheaded by the charity Catholic Relief Services is trying to change that notion. Giriama elders, or kayas, have been enlisted in an interfaith council that seeks to reach people and inform them that it is illegal for girls younger than 17 to marry and that violators can go to prison.

John Baya Mitsanze dresses in blue and white scarves that signify he is a Giriama traditional leader.

"It's a big problem, a serious problem — especially when you have young girls getting pregnant while in school," Mitsanze says. "Poverty is actually the driving force. Our cultural values are being seriously eroded."

UNICEF studied sexual exploitation of children in Malindi and listed several reasons why the crimes go unreported: cultural acceptance, a complicated verification process for sex crimes against minors, and rampant corruption among police who demand bribes to take action.

The Malindi Child Protection Center was opened by the government three years ago to try to curb early marriage. Naomi Kazungu is its manager.

"It's like when you have a case and it's supposed to be taken to court and it's for a child, like it's an early marriage case, nobody can give you money," Kazungu says, meaning that there is no one to pay off the police in order to pursue the case.

She says she has referred 13 such cases to the police, but they have made no arrests.

Local leaders are so concerned that Malindi is gaining a worldwide reputation for sex tourism that the local marine association is launching a campaign against child sex exploitation. Steve Trott is the chairman.

"What we are seeing is certain tourists coming from, mainly from Europe, coming here for the sun, sex and sand experience," Trott says. "And that's something we need to stop it in its tracks."

If there's a hero in this story, it is Esther Kutto, principal of Dabaso Primary School in the beach resort of Watamu.

Her teachers act like social workers: If they notice a girl has dropped out of school, they go looking for her. And if they find that the girl has been married off, or sold to a white foreigner, they notify the police. Like the kaya elders, Kutto educates her students' parents that early marriage is wrong.

Kutto says underage pregnancies at her school have dropped from 29 in 2009 to five so far this year.

So passionate is the principal about saving girls from early marriage that two years ago she repaid a bride price of $70 for one of her students who had been married off. She snatched the teenager away from her indignant husband and brought her back to school.

The girl is about to graduate, and Kutto expects her to become an advocate to convince other girls to take a stand against early marriage and sexual exploitation.