Accessibility links
U.S. Steps Up Aid (But No Arms) To Syrian Exiles The U.S. is emphasizing the assistance it provides to Syrian refugees, but the Obama administration is still not showing any signs that it's prepared to arm the rebels. 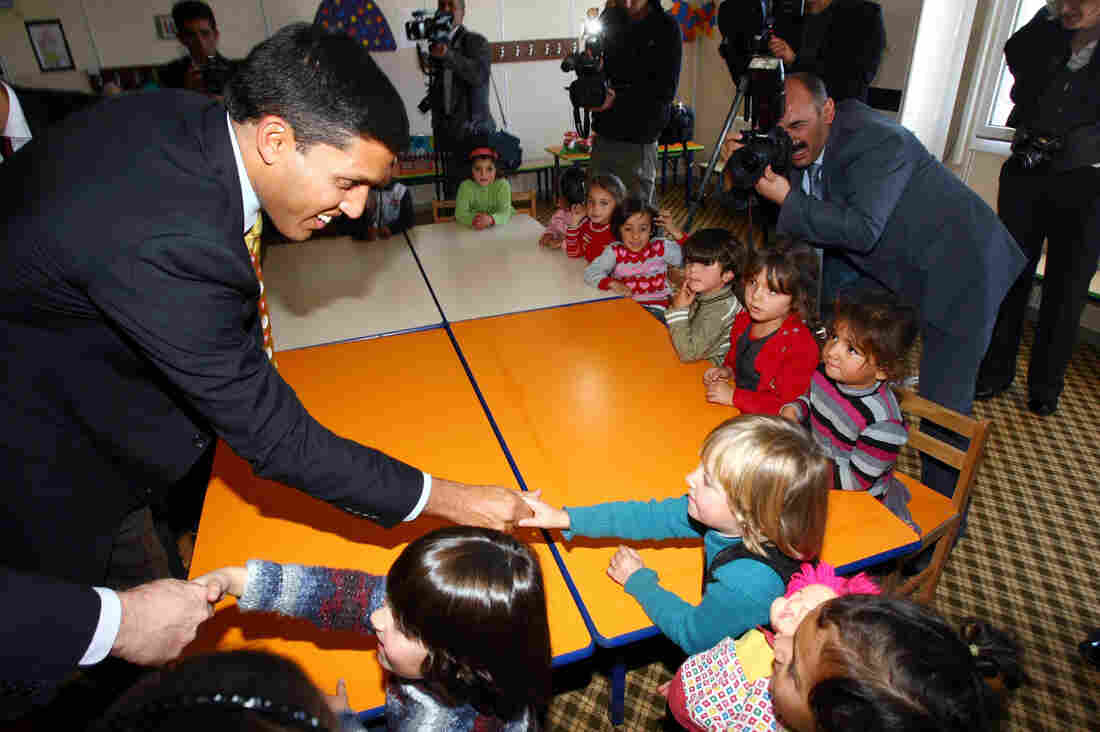 Rajiv Shah (left), the head of USAID, speaks with children during a visit at the Oncupinar Syrian refugee camp in Turkey, near the Syrian border, on Nov. 27. Adem Altan/AFP/Getty Images hide caption 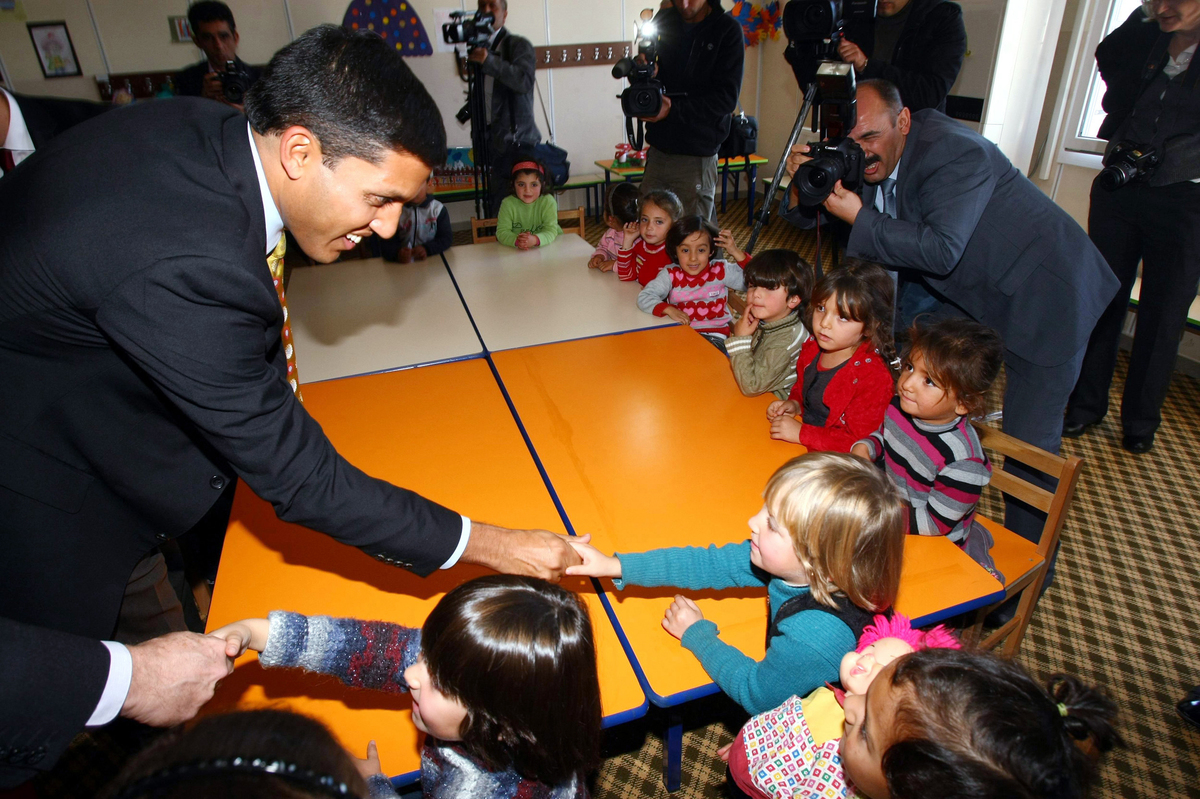 Rajiv Shah (left), the head of USAID, speaks with children during a visit at the Oncupinar Syrian refugee camp in Turkey, near the Syrian border, on Nov. 27.

The Obama administration remains wary about arming Syria's rebels. But when it comes to humanitarian aid, the U.S. contribution, over $250 million, is second only to Turkey.

Then there is non-lethal aid, an additional $50 million for communication equipment and training courses.

If you are surprised by the numbers, so are Syrian activists, who say American support is still almost invisible on the ground. Now, U.S. officials are highlighting the American aid profile.

Rajiv Shah, the head of the United States Agency for International Development, or USAID, made the first high-level visit to Turkey's largest refugee camp last week.

The Killis camp, within sight of the Syrian border, houses more than 13,000 refugees. Shah was accompanied by a delegation of Turkish officials and a large contingent of the Turkish media in a tour to showcase U.S. support.

With more than 130,000 Syrians registered in border camps, Turkish officials say they are overwhelmed by the influx. The U.S. is stepping in to help with a new $3.9 million dollar U.S.-funded program to provide food aid for all the residents of the Killis camp.

Matthew Nims, the deputy director of the USAID office for Food for Peace, explained that every family gets an electronic voucher card. "It's a stipend through an electronic Visa card," he says.

The cards are accepted in the food markets in the camp. Nims said that by the end of December, 40,000 e-vouchers will be distributed and by this summer, the program will expand for 100,000 Syrian refugees in Turkey.

As the U.S. steps up aid programs outside Syria, for the first time, U.S. officials acknowledge U.S. aid is also going inside the country.

"We know we've reached more than 300,000 Syrians with medical support," said Shah, referring to field clinics and hospitals in rebel held areas. "We know there's some hospitals in Homs and Dera'a — you walk into that hospital — 80, 90 percent of the medical supplies are coming from American assistance."

But many Syrians remain skeptical of U.S. support because it does nothing to end the rule of President Bashar Assad, said Elizabeth O'Bagy, an analyst with the Washington-based Institute for the Study of War. While American support is largely focused on humanitarian aid, she said, Saudi Arabia and Qatar are sending cash and weapons to rebel groups.

"This had led to the perception that the U.S. is not helping at all and actually created a certain amount of resentment towards the U.S. for not being more active," said O'Bagy.

But the U.S. State Department is supporting Syria's political opposition, in projects that have been under wraps until recently.

One program, a multimillion-dollar media project called Basma, or "fingerprint" in English, is run out of an office in Istanbul where Syrian activists write and produce reports for a Facebook page and the Basma website. A promotional video explains the goals of Basma: "to support a peaceful transition for a new Syrian nation that supports and guards the freedom of all of its citizens."

One of the reporters on the team, who can't be named because she still has family inside Syria, said, "It's our dream to be like the voice of new Syria."

But the media effort is not well-known inside Syria as local, grass-roots media outlets begin to emerge.

In another U.S.-funded program, kept quiet over security concerns, young activists, mostly those in the front lines in the early days of the revolt, are invited to Istanbul for workshops. They gather in hotels, from towns and villages inside Syria. They are now members of revolutionary councils — civilians trying to restore services and local government in places out of regime control.

One of the trainers says the program tries to prepare them for leadership in a country that's been ruled from the top down for 40 years.

"Someone who's a doctor or a lawyer or owned a bakery are now finding themselves in positions where they have to make decisions and they have to call the shots. ... They're unsure over how to proceed," said the trainer.

But they are also uncertain even after the training ends because the U.S. program doesn't include resources, cash, to fund projects in places where garbage is piling up, fuel for bakeries is running low, and thousands of Syrians are now homeless and cold as winter sets in.

Money is power in Syria, O'Bagy tells NPR, and it's the armed groups who have the cash; the most religiously militant have plenty of private backers.

As the fight grinds on, rebel groups, including the Islamists, are growing more powerful, while the more secular, civilian activists say they are still begging for support.

Rima Marrouch contributed to this article.