Accessibility links
Is Morsi Morphing Into Authoritarian He Opposed? Once referred to as the Muslim Brotherhood's "spare tire," Egyptian President Mohammed Morsi has proven much more formidable than many Egyptians expected. But critics say his latest moves, including one to push through a hastily drafted constitution, could tear Egypt apart. 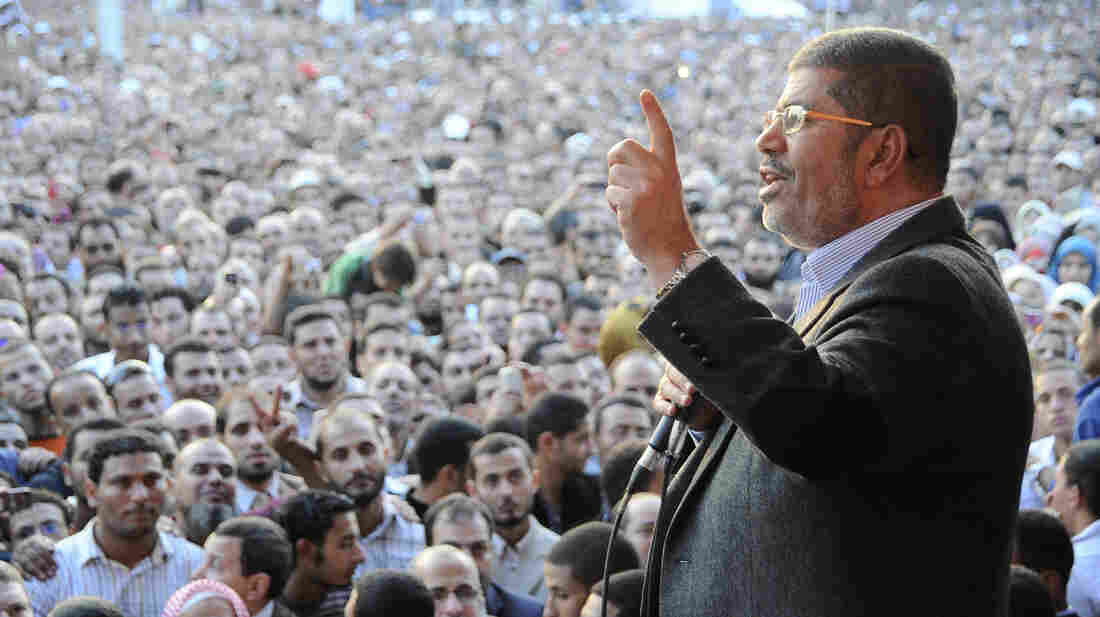 Egyptian President Mohammed Morsi speaks to supporters outside the presidential palace in Cairo on Nov. 23, a day after he issued decrees that gave him sweeping powers. AP hide caption

When Egyptian President Mohammed Morsi was elected, some Egyptians jokingly referred to him as the Muslim Brotherhood's "spare tire." He was the backup candidate of the Islamist organization, whose first choice for the presidency was barred from running.

But Morsi has proved much more formidable than many Egyptians believed.

Before becoming president, Morsi was unaccustomed to the limelight, something that was clear during his first press conference after being elected last summer. Unaware that he was being taped, he urged someone to call his relatives and tell them he was going to be on TV.

This was the man Egyptians had elected as their first leader after decades of authoritarian rule. He refused to move into the presidential palace, deeming it too opulent. His veiled wife became the target of jokes by secular Egyptians. 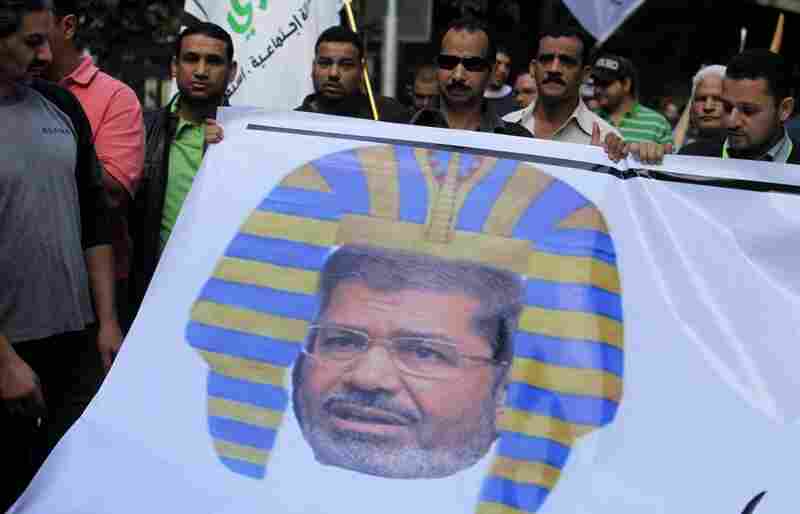 Egyptian protesters hold a banner depicting Morsi as a pharaoh, during a rally expressing opposition to Morsi's decrees, in Cairo, on Nov. 23. Andre Pain/EPA/Landov hide caption 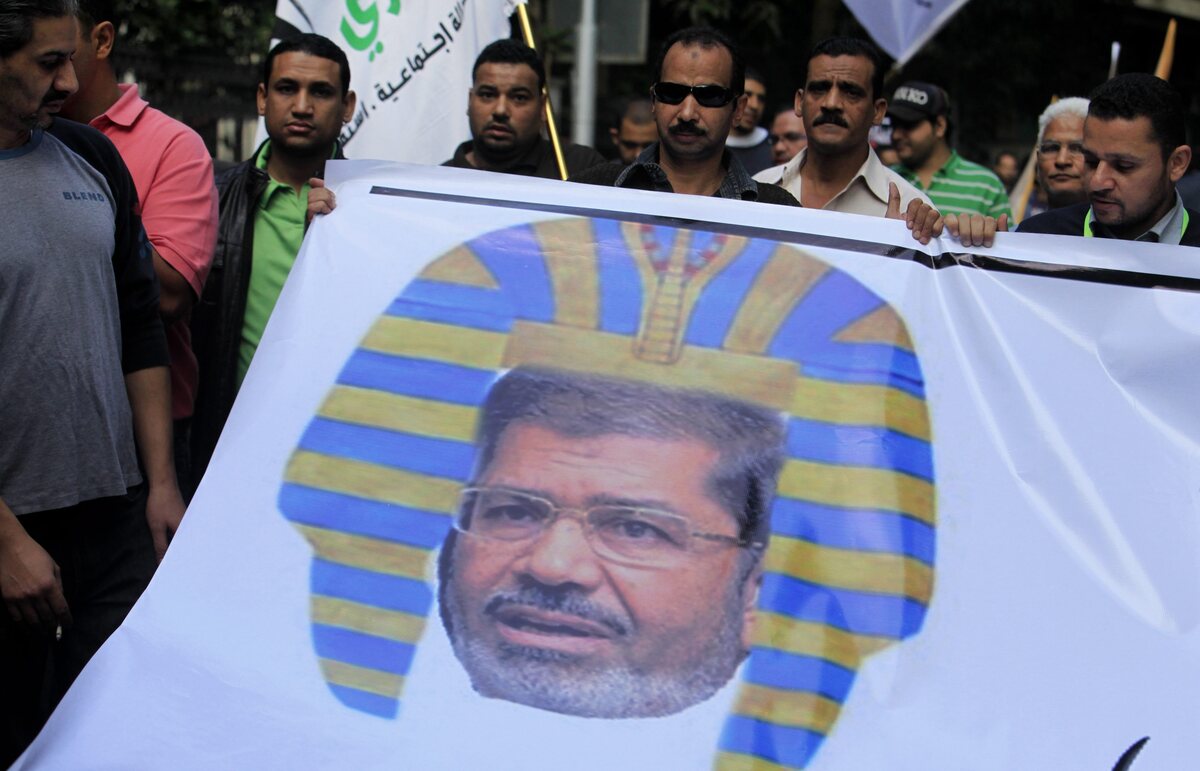 Egyptian protesters hold a banner depicting Morsi as a pharaoh, during a rally expressing opposition to Morsi's decrees, in Cairo, on Nov. 23.

But his man-of-the-people charm earned him support among much of Egypt's poor and middle class, and legions of loyal Muslim Brotherhood followers.

And his supporters and opponents soon discovered that he is a powerful force.

On inauguration day he stood in Tahrir Square, before a huge crowd, and threw open his jacket to show he was not wearing body armor.

"I am one of you, and I always will be," he said. "I will achieve the revolution's goals."

It's a promise his critics say he broke by effectively putting himself above the law until a new constitution is in place.

The critics complain that Morsi is now trying to push through a hastily drafted version prepared by an Islamist-majority body. The president has scheduled a referendum on the constitution on Dec. 15.

He says he and other Egyptians face the impossible choice of leaving Morsi with absolute power or voting for a flawed constitution.

"This means that we are not only creating a pharaoh, but the equivalent of a god," he says.

Houdaiby says that Morsi is rallying his supporters and demonizing the opposition, leading to what he called a frightening divide in Egyptian society.

Egyptian Judges Prepare For A Strike

But Gehad el-Haddad, an adviser to the Muslim Brotherhood, says that Morsi faced a true threat from the nation's top constitutional court, the members of which were all appointed under the old regime. They've ruled against the Islamists and Morsi repeatedly over the past six months, and were threatening to further delay a new constitution.

Morsi's latest move, Haddad says, is just further proof that he's willing to do anything to protect elected institutions from remnants of the Mubarak regime.

"I think that the pattern has always been up and down," Haddad says. "We enter into a stalemate of events where there's little progress happening ... insufficient change going on, but then he takes major steps to unblock the type of challenges Egypt's facing."

Tarek Masoud, an expert on the Muslim Brotherhood at Harvard's Kennedy School of Government, says those first impressions of Morsi, as a subservient figure, were dead wrong.

"This is one of the toughest politicians I've certainly ever encountered, in Egypt or elsewhere," he says.

Masoud says even members of the Brotherhood complained about his stubbornness while he served in parliament during former President Hosni Mubarak's era.

Morsi "would get into the most raucous fights, with members of the National Democratic Party, with ministers in Mubarak's government," Masoud says. "This is a very tough customer."

That's exactly why the Brotherhood chose him, Masoud says. He would stubbornly pursue the group's broader goals.

Early in Morsi's presidency, he shocked the nation by forcing the retirement of Egypt's top two generals and stripping them of power.

Then he successfully brokered a cease-fire between Hamas and Israel, winning him international accolades.

Observers and critics say the U.S.-educated engineer may have gone too far with his move against the judges. But he and the Muslim Brotherhood will likely get away with it, says Shadi Hamid, an Egypt expert at the Brookings Doha Center.

"They believe that they have the overwhelming majority of Egyptians on their side — with both Morsi's decree as well as the constitution — and once they have a referendum vote, they will be able to claim a majority," Hamid says.