Accessibility links
A Rebel Fighter Sees Islamic Law In Syria's Future Islamist rebels are among the groups fighting to topple Syrian President Bashar Assad, raising concerns in the West about what their role would be in a Syria without Assad. NPR's Kelly McEvers recently spent some time with these Islamist fighters in the embattled city of Aleppo. 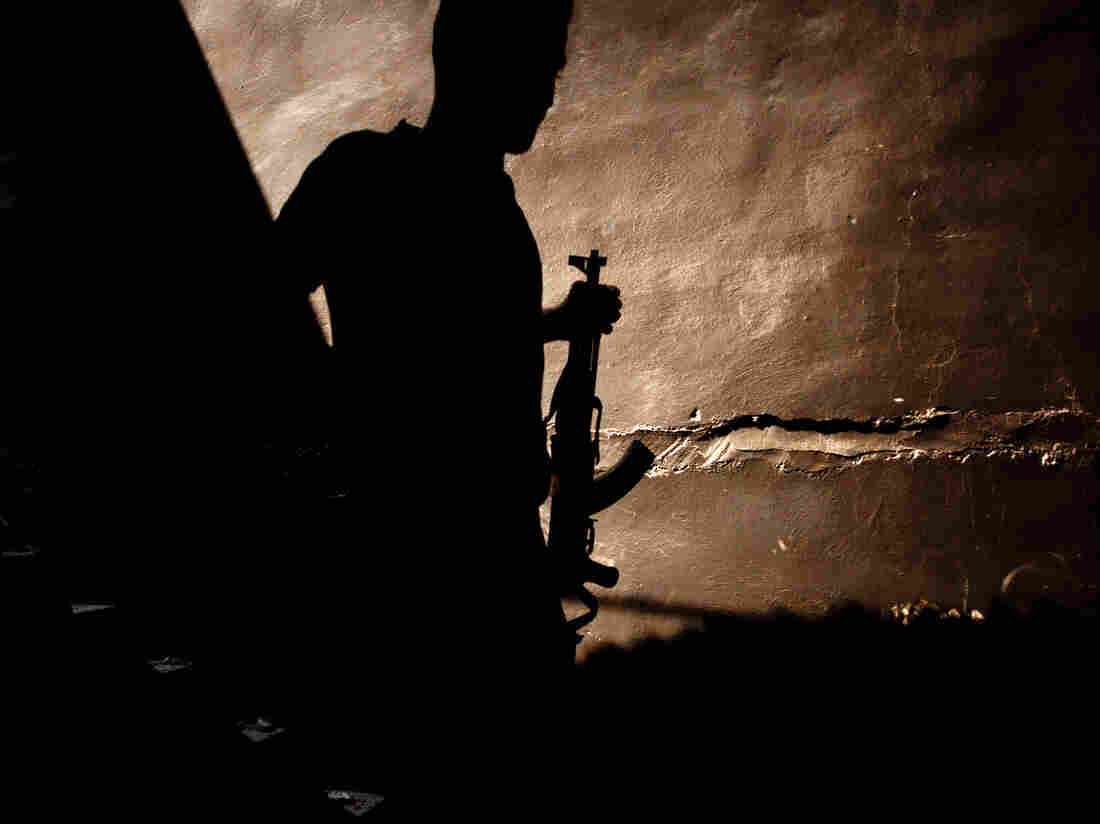 A Syrian rebel walks past the stairs of a bombed building in the Saif Al Duli district in Aleppo, Syria, on Sept. 10. The vast majority of those fighting against President Bashar Assad's regime are ordinary Syrians and soldiers who have defected, but Islamist rebels are also present among the fighters. AP hide caption 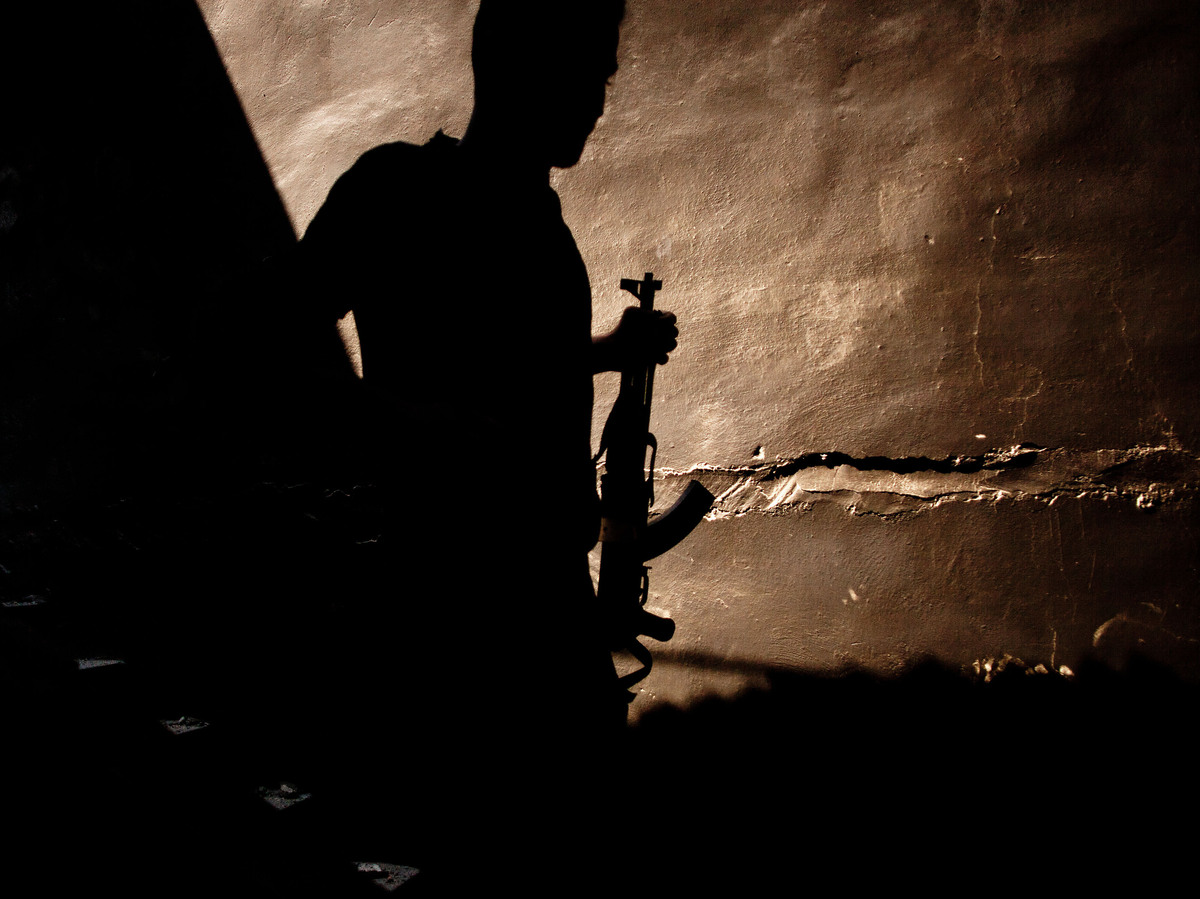 A Syrian rebel walks past the stairs of a bombed building in the Saif Al Duli district in Aleppo, Syria, on Sept. 10. The vast majority of those fighting against President Bashar Assad's regime are ordinary Syrians and soldiers who have defected, but Islamist rebels are also present among the fighters.

It's about 9 o'clock in the morning, and already it's been a long day for Abu Anas. He has lost two men to a sniper serving the Syrian regime. Four more have been injured.

But Abu Anas walks with a striking calm through the bombed-out, ruined streets of Aleppo, a city that has been at war for months. He wears a black headband bearing Islam's holy creed: "There is no God but God. And Muhammad is his messenger."

Abu Anas commands a unit of Kataib Ahrar al-Sham, the Brigades of the Free People of Syria, a religious group that like other rebel groups wants to bring down President Bashar Assad's regime. But it's what it would do after that downfall that sets his and other Islamist groups apart.

Abu Anas believes that once the Syrian regime is toppled, a dawlet islamiyah, or state governed by Islamic law, should replace it. As far as he's concerned, that state would be one of peace and equality.

I ask him, "What if other people don't want Islamic law?"

"People are the ones who is going to decide," he replies through an interpreter. "If the people doesn't want that, that's their decision."

It sounds fair enough, but Ahrar al-Sham isn't known for its tolerance. Aid kits for refugees include religious materials urging women to cover, and the group refused to meet with NPR's female interpreter until recently. That said, the fact that Abu Anas is even talking to me, a foreigner and a non-Muslim, is something. That plus the fact that his group believes in the people's right to choose their leaders shows that it's not the most hard-line Islamist group in this fight.

That honor falls to Jabhat al-Nusra, a much more secretive and violent group. The group doesn't meet with the Western media. And though it claims to only attack military targets, its use of suicide bombings has killed scores of civilians. What's more, it's been approved and lauded by known al-Qaida figures online. Sources in Iraq tell NPR the group is linked to that country's branch of al-Qaida.

I ask Abu Anas if he believes in suicide attacks.

It's clearly a mixed picture. To call all of these guys straight-up al-Qaida would be a mistake, but to call them warm, fuzzy democrats wouldn't be right, either.

These days, terrorism experts say, it's less about whether a group will launch suicide attacks and more about who gets the weapons.

Lately, Abu Anas' group and the more hard-line jihadists have worked side by side to take Syrian army bases and weapons with the less religious, more moderate rebels who call themselves the Free Syrian Army.

Some analysts say this was a calculated move on the part of the Islamists. Not only are they vying for weapons and power, but for the first time they are bowing to public pressure to be less extreme. Last month Islamist fighters released a video denouncing the political opposition that's working to bring down Assad. They later retracted the video after criticism from Syrian civilians.

Charles Lister, an analyst at IHS Jane's Terrorism and Insurgency Center, says the retraction was a good thing.

"However, that was a retraction of a video that came out while Assad is still in power and whilst they [the Islamists] have relatively little to lose," he says. "I think the situation could feasibly change if Assad was actually to fall. There'd be an awfully lot more to play for. And so I think some kind of tension is inevitable."

But will it be so easy? By many accounts, the militant Islamist groups now number in the thousands and are growing every day.

It's another morning, and we're driving into Aleppo. The driver offers a friend a ride. The friend, Omar, is about 16. He sits next to me.

We find out Omar has just completed several weeks of training with Ahrar al-Sham, Abu Anas' group. The training was in "sports, shooting, taking care of your weapon," Omar says through an interpreter.

I ask, "Is he pretty good with a Kalashnikov now?"

"God willing," he replies. It turns out this day is Omar's first day reporting to work.

Omar says he and his parents fled Syria after the regime's army shelled their village. They went to live in a refugee camp at the Turkish border. Omar's brother-in-law joined Ahrar al-Sham, so Omar figured he should join, too. We ask Omar why he wants an Islamic state, and how that would change Syria.

"The government would stop killing people. It's the only way to get them to stop the killing," he says. "Beyond that, I don't know. The rest of it is up to our leaders."