Accessibility links
Kitchen Window: Learning To Cook Under Pressure The pressure cookers of a generation or two ago stoked fear with their explosive reputation. But don't let those bygone notions keep you from bringing faster, more flavorful meals to the table.

Learning To Cook Under Pressure

Learning To Cook Under Pressure 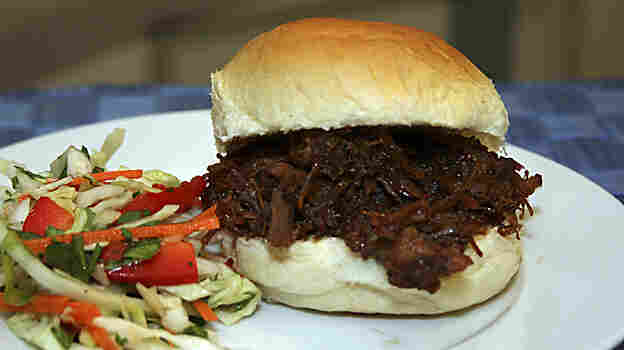 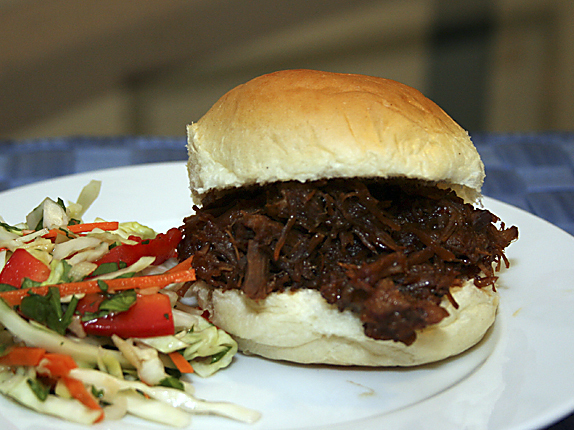 Depending on your age and how much time you spent in the kitchen with your mother or grandmother, you may remember a big scary pot on the stove with what looked like a small weather vane on top. As it heated up, the top would begin spitting, hissing and wheezing like an asthmatic cobra.

It seemed to me that my mother put an assortment of raw ingredients into her pot, closed the lid, turned on the heat, and magic happened inside. A while later, she'd breathe a sigh of relief (no explosions), open the lid and produce a completed dinner.

At that point in my mother's kitchen, she'd warn us, "Stand back, just in case the top blows." What? I thought. Pots exploding in the kitchen? Cooking was that dangerous?

As far as I know, my mother's pressure cooker never lost its top, but those early versions could be dangerous. Even if most of us never saw one blow up, the threat was frightening enough to keep an entire generation of cooks away from pressure cookers. And if we weren't scared, we were mystified.

It seemed to me that my mother put an assortment of raw ingredients into her pot, closed the lid, turned on the heat, and magic happened inside. A while later, she'd breathe a sigh of relief (no explosions), open the lid and produce a completed dinner.

Even after I learned how a pressure cooker worked, my fear and awe remained, and I know I wasn't the only American cook who felt that way. While other culinary cultures have embraced the pressure cooker, it was for years an oddity in the U.S. kitchen. Now, though, we're catching up to the rest of the world, as more of us learn what an enormous help this magical kitchen tool can be. 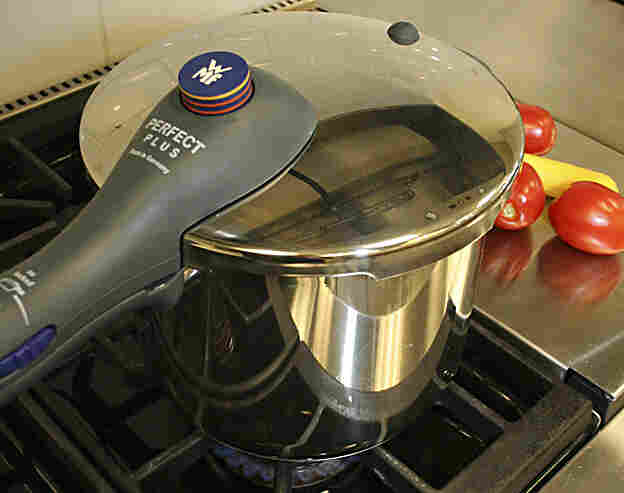 Today's pressure cookers have cast off the reputation of their mystifying, potentially dangerous forebears. Dave Scantland for NPR hide caption 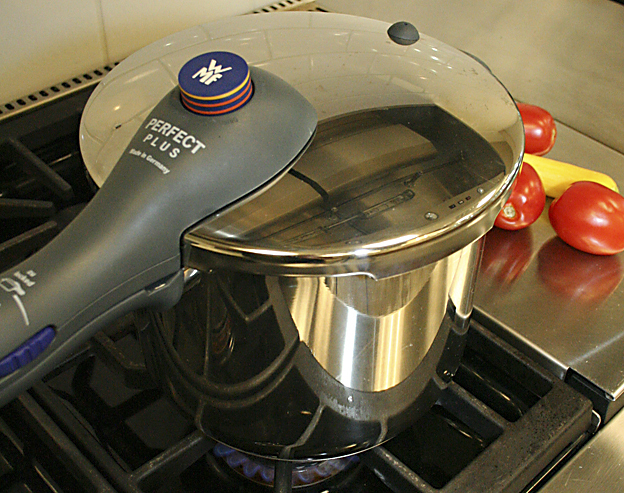 Today's pressure cookers have cast off the reputation of their mystifying, potentially dangerous forebears.

But contrary to what many cooks believe (as I used to), the liquid inside a pressure cooker is not boiling. In most cases that's actually the point of using one: You want hotter but not boiling liquid for braising, where boiling the meat would toughen it, or in stock making, where boiling will cloud the stock.

The higher cooking temperature results in not only a faster cooking time but also more flavor, as the physical reactions that produce new flavor molecules happen faster at higher temperatures. So not only is your pressure-braised meat tender in less time, but it's just as flavorful as it would be had it simmered in the oven for hours.

Janet A. Zimmerman is an award-winning food writer and cooking class instructor based in Atlanta. Her work has twice been featured in the anthology Best Food Writing (2008 and 2010). In 2010, she received the Bert Greene Journalism Award from the International Association of Culinary Professionals. She is a senior manager for the Society for Culinary Arts & Letters, a nonprofit organization dedicated to culinary education, and the guide for Cooking for Two at About.com.

Even after I realized how much time a pressure cooker could save me, I was hesitant about adding one to my kitchen. I remembered the soups and stews my mother created with hers, and frankly, those dishes didn't entice me.

First, I lived alone, and a big batch of split pea soup or beef stew was the last thing I wanted taking up refrigerator space. But mostly, I was hung up on the idea that anything I cooked in a pressure cooker had to be a start-to-finish meal. That is, everything would go in at once, and when the lid came off, that was it. Those kinds of recipes just weren't in my repertoire.

Then I saw a demonstration of pressure cookers at the cookware store where I worked. The rep steamed some beets and made a salad with them. She started a risotto dish the usual way — sauteing onions and Arborio rice in butter, then adding wine to reduce — before adding broth and locking on the lid. Then she finished the dish with butter and cheese after the pressure was released. This was my kind of cooking.

She also addressed my last issue with pressure cookers. While I was beginning to understand its potential value in my kitchen, it still seemed like an expensive piece of equipment given its limited use. But she pointed out something that never would have occurred to me. Without the locking lid, a pressure cooker pot is just like any other. With a regular lid, a pressure cooker becomes a heavy, well-constructed pot you can use for any traditional cooking task.

I now use my pressure cookers (yes, I have two) to steam dense root vegetables in minutes and to braise tough, flavorful meats in less than half the time traditional cooking takes. With a regular lid, I cook pasta and blanch or steam quick-cooking vegetables. My pressure cookers are among my favorite cooking tools. And I never worry about explosions.

I love this salad when tangerines are in season. If you buy a seedless variety, you can simply peel them and add the segments as is, although I think the presentation is more elegant if they are cut from the membranes. 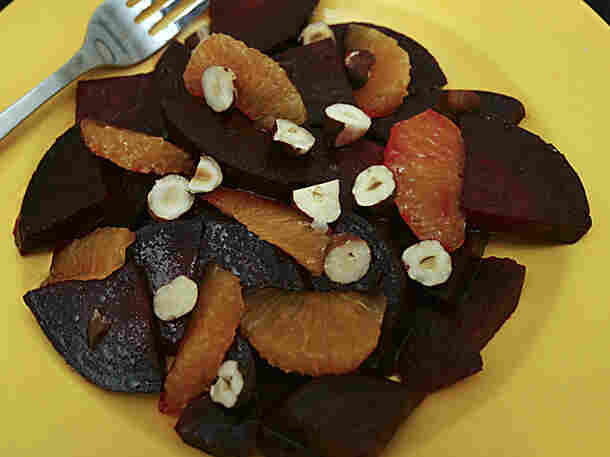 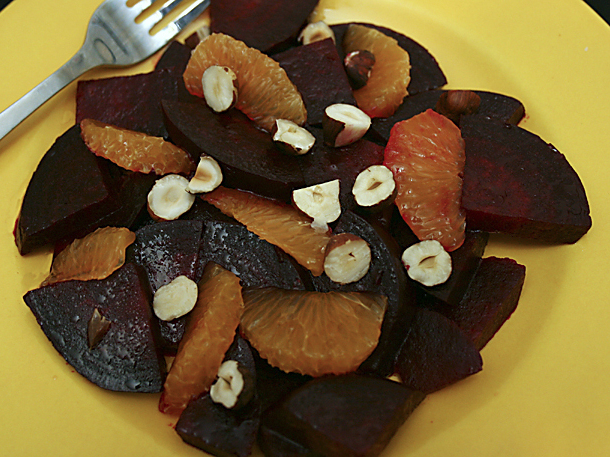 2 to 4 tangerines (depending on size and variety)

Wash the beets if they are dirty. Cut off the greens and stem end, trying not to cut too deeply into the flesh. Trim off the root end.

Place beets in a pressure cooker on the steamer rack with about 3/4 of an inch of water in the bottom. Over medium heat, bring to high pressure and cook for 8 to 9 minutes. Let pressure release naturally.

Let beets cool slightly and peel. (Beets are easiest to peel when they're just cool enough to handle.) Cut in half (or quarters, depending on size) and slice into large bite-size pieces.

Cut the peel off the tangerines, going all the way to the flesh. Carefully cut in between the membranes to remove the segments, also removing seeds, if any. Work over a bowl to collect the juice (you should get the tablespoon you need for the dressing).

Whisk together dressing ingredients or shake in a jar. Pour about half the dressing over beets and toss gently. If using the optional greens, spread them out on a serving platter. Arrange beets over greens, or place in a large shallow bowl if not using greens. Top with tangerine segments and drizzle with remaining dressing. Sprinkle with hazelnuts and serve immediately.

This makes a delicious and unexpected holiday side dish. Using a potato ricer or food mill removes most of the stringy fibers and gives the potatoes a smoother texture, but they can also be mashed by hand for a more rustic finish. 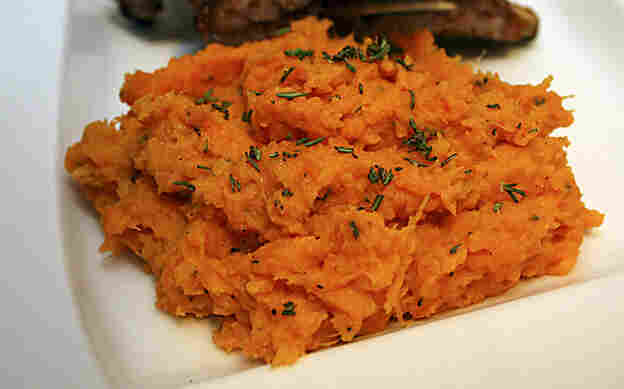 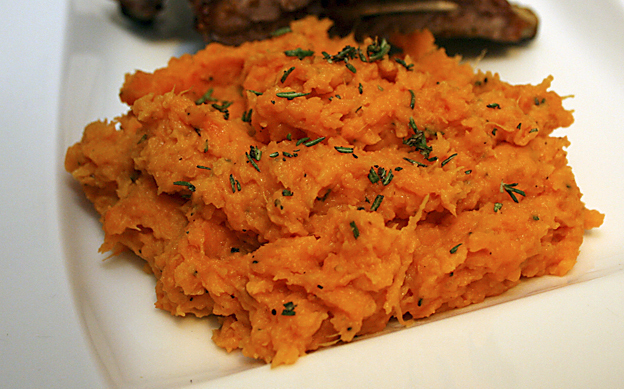 If sweet potatoes are small, cut in half lengthwise. If large, cut into four pieces. Place in pressure cooker on the steamer rack with 3/4 inch of water in the bottom. If they won't fit in one layer, stack them so that the steam can circulate around all the pieces.

Over medium heat, bring to high pressure and cook until tender, 9 to 10 minutes (for mashing, slightly overdone is better than underdone, so I cook for 10 minutes to be sure they're completely cooked). Release pressure naturally.

Let cool slightly, then slip the peels from the potatoes and cut into chunks. Press the potatoes through a ricer or food mill (or mash by hand). Add cream, butter, cheese, rosemary, salt and pepper. Stir to combine. Add more cream if necessary to make a smooth puree. Adjust seasoning.

I like this pork shredded and served on buns with a tangy Asian-style coleslaw, but it's also great served over rice. For small amounts of pork shoulder, country-style ribs work quite well (make sure you get them from the shoulder and not the loin). 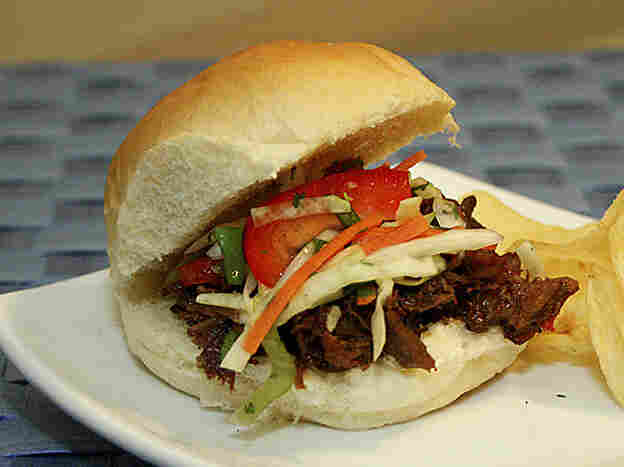 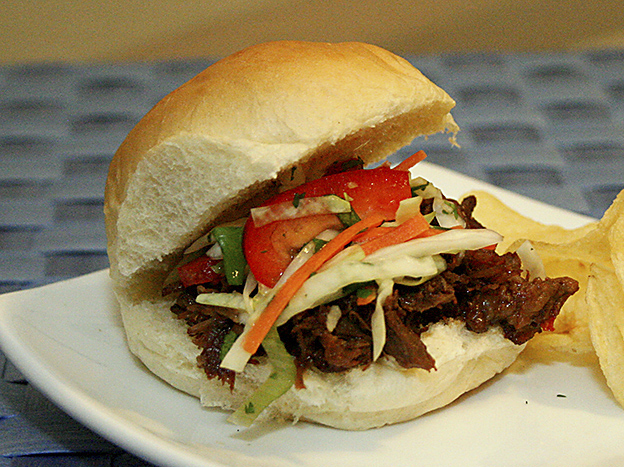 Trim pork, removing as much visible fat as practical, and cut it into 2-inch (more or less) cubes.

Put pork and sauce in a pressure cooker. Close and lock cooker and bring the pressure up to 15 psi (usually the maximum setting). Cook 30 minutes. Remove from heat and allow pressure to release naturally.

When meat is done, strain mixture through a coarse strainer into a fat separator. If using in sandwiches, shred meat and set aside while you finish sauce. If serving over rice, leave meat in chunks.

Bring sauce to a boil, stirring frequently to prevent scorching. Reduce to consistency of ketchup.

When sauce is ready, toss meat in it to coat and rewarm.

Dark beer and onions have a great affinity for beef, and this dish is a perfect example of that. Pressure cooking short ribs results in tender, succulent meat, and the braising liquid, when reduced, makes a luscious sauce. 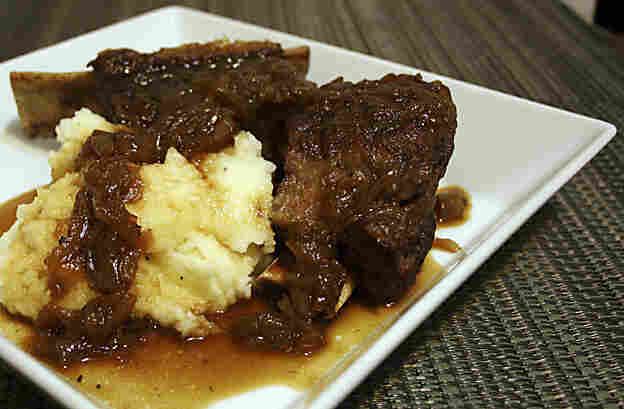 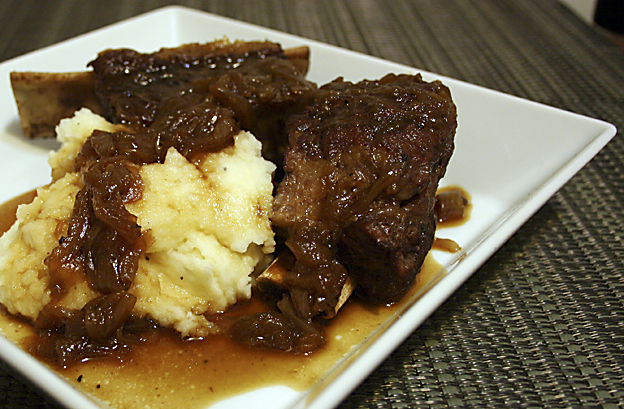 Canola or vegetable oil for browning

Liberally salt short ribs on all sides. Coat bottom of a large saute pan with oil (you can use pressure cooker for the initial steps, if you want to work in batches). Heat over medium-high heat. When the oil shimmers, add short ribs in a single layer without crowding. Brown on all sides, working in batches if necessary. Remove and set aside.

Add another coat of oil if pan is dry. Heat and add onions. Sprinkle with salt and thyme and stir until onion slices separate and onions just begin to soften. Add about half the porter and stir to deglaze the pan, scraping up all the browned bits from the bottom of the pan.

Pour the onions and beer into the pressure cooker (if using a separate saute pan). Add the rest of the beer and the beef stock. Place the short ribs in the pan in a single layer. The liquid level should be about halfway up the ribs. If not, add a little more stock.

Lock on the lid and, over medium heat, bring to 15 psi (high pressure). Adjust the heat to stabilize pressure and cook 40 minutes. Remove from heat and allow pressure to release naturally.

Carefully remove ribs from sauce (they'll be quite tender and will fall off the bones if you're not gentle). Place on a sheet pan and keep warm in a low (170-degree) oven while you finish sauce. Strain onions out of sauce and set aside. Pour sauce into a fat separator. Allow fat to settle, then pour defatted sauce into a medium saucepan. Stir in mustard and brown sugar.

Bring sauce to a boil, stirring frequently to prevent scorching. Reduce to consistency of gravy. Add onions and heat for a minute or two. Taste for seasoning and adjust (if the beer is highly hopped, you may need more brown sugar to balance the bitterness).

To serve, pour the sauce over warm short ribs. Serve with mashed potatoes or noodles.

Move Over, Microwave: A Pressure Cooker Comeback? (With Recipes) June 11, 2011