Accessibility links
Vets Flock To Colleges ... But How Are They Doing? The new GI Bill has helped send a large number of veterans to college in a short span of time. But many face special challenges, and there's no real data yet on how they are performing in school. 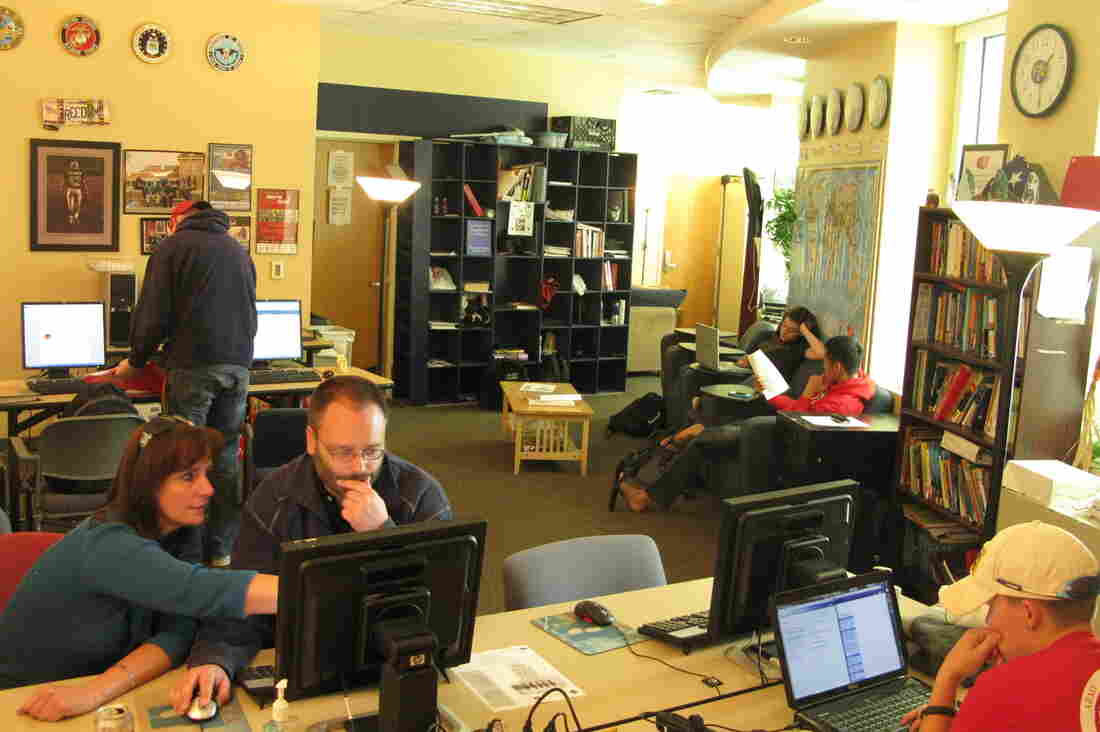 Record numbers of veterans are returning home from war and heading to college. The biggest draw: the generous benefits of the Post-9/11 GI Bill, which in three short years has helped 860,000 vets go to school.

But there's still little known about how these students are doing.

For years, Sarah Yaw has been working with veterans at Cayuga Community College, a small school in rural, upstate New York. She took a leave in 2009, around the time the Post-9/11 GI Bill went into effect. When she returned to the school, she found a dramatic change.

"In that time period we had a 400 percent increase in student veterans on campus," Yaw says.

It was particularly remarkable because the school was not recruiting vets. They just started showing up, she says.

How many [veterans] are graduating? And once they graduate, how many folks are getting employed?

Michael Dakduk, of Student Veterans of America, who is working on a database to answer these questions

Yaw says many of the vets showing up at her door were the first in their families to go to college. And they brought new challenges, like one vet who started school just weeks after leaving the service.

"So, I asked him how he was doing. And he said, 'I can't get through the parking lot.' And what he meant was, this space is not secure to me, given my training and my combat experience," Yaw recalls.

She realized vets like him needed a lot more than traditional college counseling, so she formed a consortium with other educators in the upstate area.

GI Bill money goes to students, not to schools, so there wasn't any extra money for counseling this new population. But she and her colleagues put their heads together and came up with ways to help these new students.

That sort of thing is going on all over the country.

At the University of Arizona in Tucson, vets and administrators built their own vets center.

Duan Copeland served in the Army. Now he's a student of microbiology, and a member of the local Student Veterans of America chapter. He likens the center to a USO, with free sodas and free printing.

Despite his baby face, Copeland, 29, is a lot older than many students on campus. Does he feel like an old man here?

Wondering About The Cost Of War? We Have Answers

Vet Walks On New Legs, With A Little Help From Mom

There's a couch, a TV and a bunch of computers. In the corner, clocks tick off the time in Baghdad, Kabul, Tucson and in Muskogee, Okla. That's where the government processes GI Bill benefits.

There are about a thousand people using GI Bill benefits at the University of Arizona. With no extra funding for the school itself, the university is paying for this center out of its own budget.

Money is tight at most public schools, and staff here know they must prove the need for this place. So they are gathering data about these nontraditional students. When students enter the door, they swipe their ID cards.

That swipe creates a record, which helps the center justify more support and more space from the university.

Like all good gathering places, this one has a den mother: Maralynn Bernstein. She hands out hugs, along with an endless stream of advice, about how to navigate the maze of GI benefits and the university bureaucracy.

Every time Bernstein tries to leave to get something to eat, someone grabs her with one more question. Bernstein says she got involved with this center because she realized the university did not know much about its burgeoning population of veterans.

Thanks to the vets center, the university knows more about this population. Bernstein says a lot of veterans arriving here are going through a bit of culture shock.

Learning To Ask For Help

Many also bear scars from their years of service. Dan Standage started this office in 2008. He lost his vision while in the military, and as a blind student, the first thing Standage had to learn was how to ask for help.

He says that was hard for him, because it went against his military training.

"The training that we received teaches us to be part of a team, not to be an individual," says Standage. "So anytime you do anything for yourself, it just feels awkward."

Now, Standage is getting a degree, a master's in orientation and mobility, so he can help other blind people get around.

Are Vets On A Path To Success?

There are no national statistics on veterans' graduation rates, and that lack of data recently led to a slight panic among supporters.

Some press accounts cited information that said only 3 percent of vets were getting degrees. Veterans' advocates quickly debunked that number, but it just pointed to a need for data.

Michael Dakduk, executive director of Student Veterans of America, is working to develop a database to show what nearly 1 million new vets are doing with the $24 billion and counting that they've received.

The Department of Veterans Affairs says it is also starting to develop this information, thanks in part to a strong shove from the White House.

But it won't be easy. As with traditional students, the information about graduate rates and job placement is pretty sketchy. The VA points out that most education stats only track "first-time, full-time students." That leaves out many vets and many other nontraditional students.

Support for the Post-9/11 GI Bill is high right now. But backers of this program know they have to prove success, especially in an era of budget cuts. Many say the best way to ensure that graduation numbers are strong is to provide plenty of support for vets when they start school.