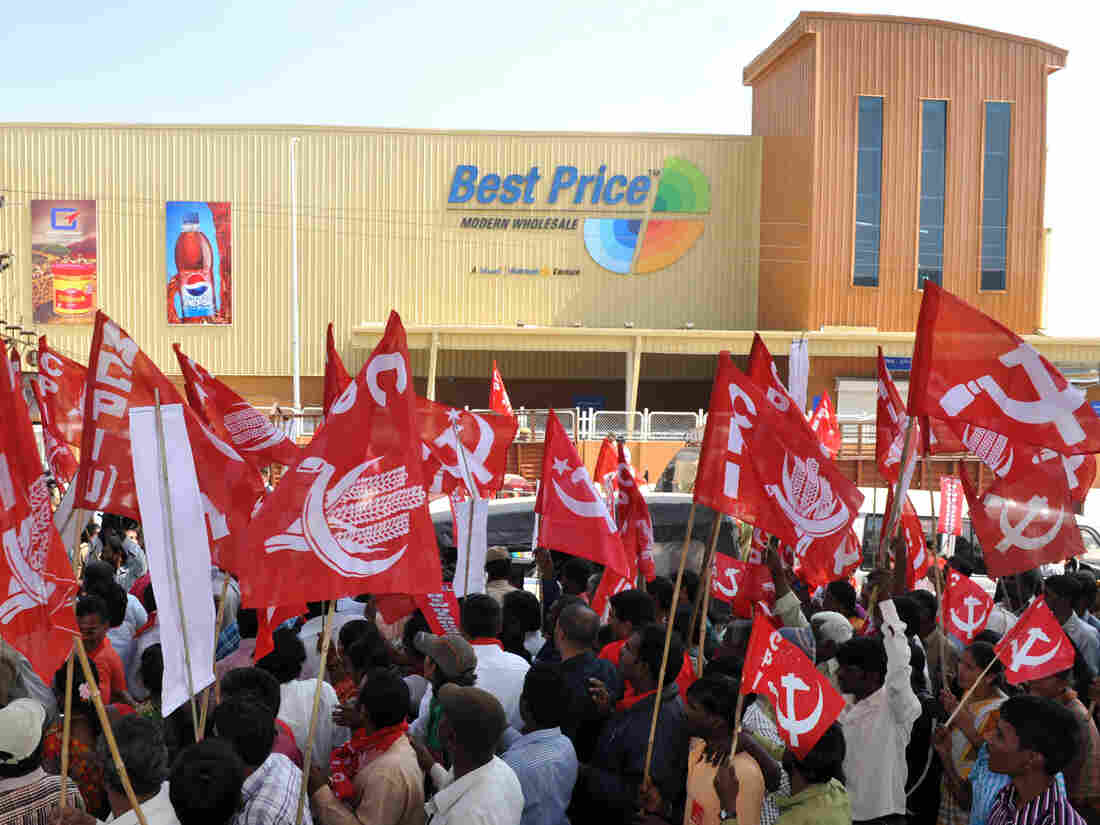 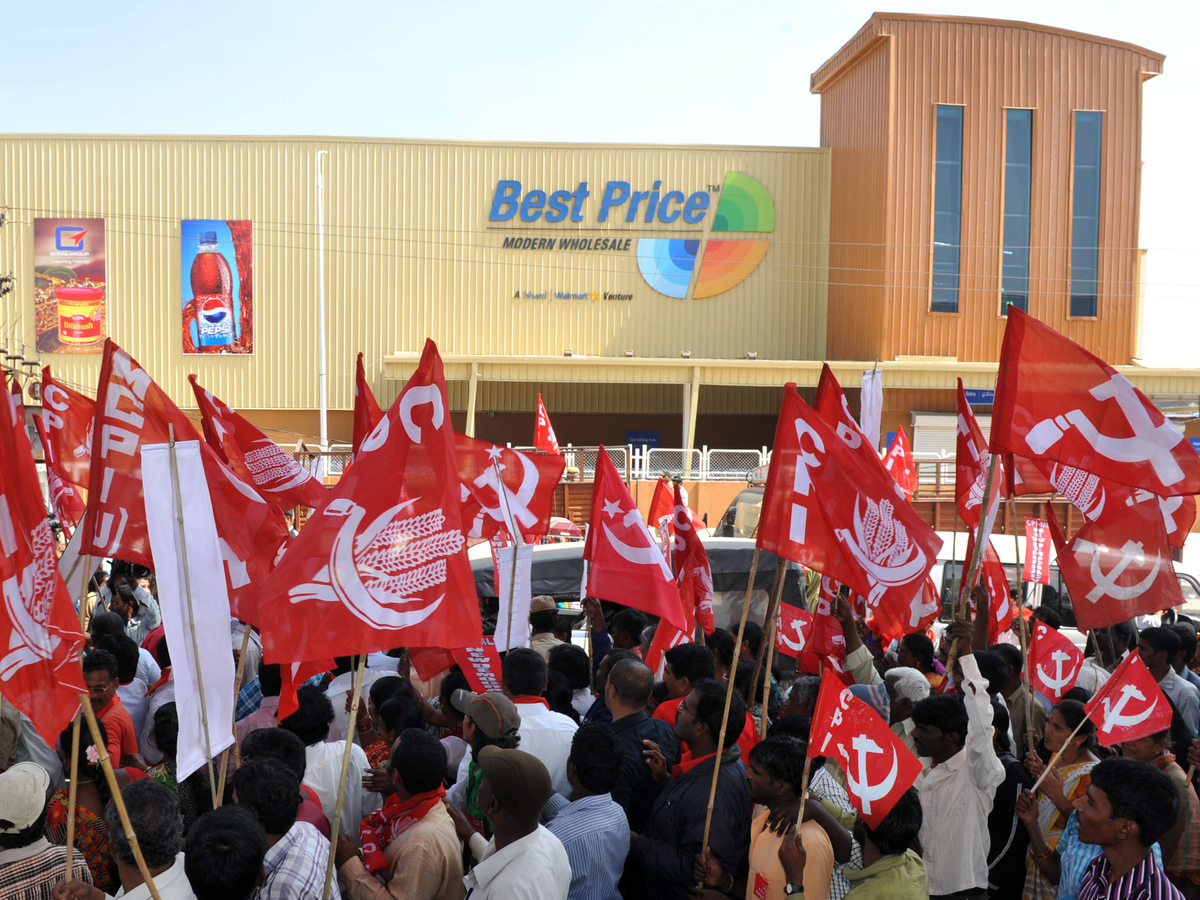 Indian leftist activists rally in front of a Best Price store, owned by Wal-Mart and its Indian partner, Bharti, in Hyderabad in November. The rally was organized to protest foreign direct investment in India's retail sector.

Wal-Mart has long stirred controversy as it has moved into American towns, and many small businesses found they were unable to compete. Now the fight has come to India, where Parliament has been hotly debating whether to ease restrictions on direct foreign investment by such giant retailers.

But the two days of verbal sparring leading up to the vote revealed deep suspicions about bringing global chains like Wal-Mart to a land of mom-and-pop stores.

For the past two days, India's political opposition let loose a full-throated assault against big-box retailers hoping to come and capitalize on India's rising middle-class consumers. The impassioned proceeding veered more toward a shouting match than a parliamentary debate, with MPs staging noisy disruptions.

Such is the heat that multinational retail chains generate in India, where pushcart vendors, hole-in-the-wall shops and small, family-owned corner stores known as kiranas make up 98 percent of India's $450 billion retail sector.

Single-brand outlets like Ikea are allowed to open stores in India. The new measure, which is part of the biggest economic reform package in two decades, clears the way for multibrand retailers: International supermarket chains like Wal-Mart and the U.K.'s Tesco will be able to set up stores and own 51 percent interest. Up until now, Wal-Mart has operated in India, but as a minority partner with a local company.

Under threat of losing India's investment grade credit rating and facing the worst economic slowdown in a decade, the central government pushed the retail reforms. Bringing in big international players like Wal-Mart would attract investment, create jobs and improve the country's lagging infrastructure, the government says.

But the leader of the opposition BJP Party, Sushma Swaraj, isn't buying it.

"The big retailers are resorting to predatory pricing," she said, arguing that foreign investment in retail will destroy small retailers and take away jobs. All around the world, she said, large supermarkets tend to reap high profits but pay low wages. She said farmers would also be exploited.

"I'd like to ask Wal-Mart and Tesco: Would you buy from farmers directly?" She said the Indian middlemen employed by the millions in India's food supply chain today would be replaced by international middlemen.

The opposition leader warned the prime minister, who sat expressionless through the raucous debate, that he's better off fighting for the rights of his own people than the rights of multinationals.

The anti-corporate rhetoric lit up Twitter with praise for the straight talk that also managed to twist a few facts — like the claim that McDonald's imports potatoes for its fries because India's aren't good enough. Not true, McDonald's said, proudly proclaiming that farmers in Gujarat provide its spuds.

In response to the opposition, Telecommunications Minister Kapil Sibal pointed out that the BJP had also proposed direct investment in retail when it was in power in 2004 but had now changed its mind. Sibal also noted that foreign direct investment in India, which totaled $47 billion last year, provides jobs for the country's young.

"They can take India forward, and that's how we make our policies," Sibal said. "We don't make our policies on the basis of whether we are sitting on this side or that side, but what we can do for the people of this country."

'An Idea Whose Time Has Come'?

Sibal said multibrand giants cater to middle-class consumers with expendable cash and cars. They would not, he said, dislocate the small urban shop owners who cater to the hundreds of millions of less well-off Indians who have neither the means to get to a big-box store nor the money to buy the merchandise.

The remark drew derision from the opposition, who said the government can't be for the Wal-Marts of the world and say it's for the poor.

But analysts like economist Ashok Gulati say big-name retailers will affect only a fraction of India's retail sector, which is largely informal. Gulati, who is also the chairman of the Commission for Agricultural Costs and Prices, says while opening up India is fraught with tensions, it can no longer be delayed.

"Modern retail is an idea whose time has come, and nobody can stop it in South Asia," he says. "And this is the way the system is going to go. And the wisdom lies in recognizing this and giving it an Indian signature."

A signature that Gulati says spurs not only competition in India's vast market but also inclusiveness.