Accessibility links
Pot Is Legal In Washington State, But Don't Drive High Last month's ballot initiative that legalized marijuana contained a deal-sweetener for hesitant voters — a new DUI standard that may make life riskier for regular pot users. Regular users of medical marijuana say they'll be stuck on the wrong side of the law. 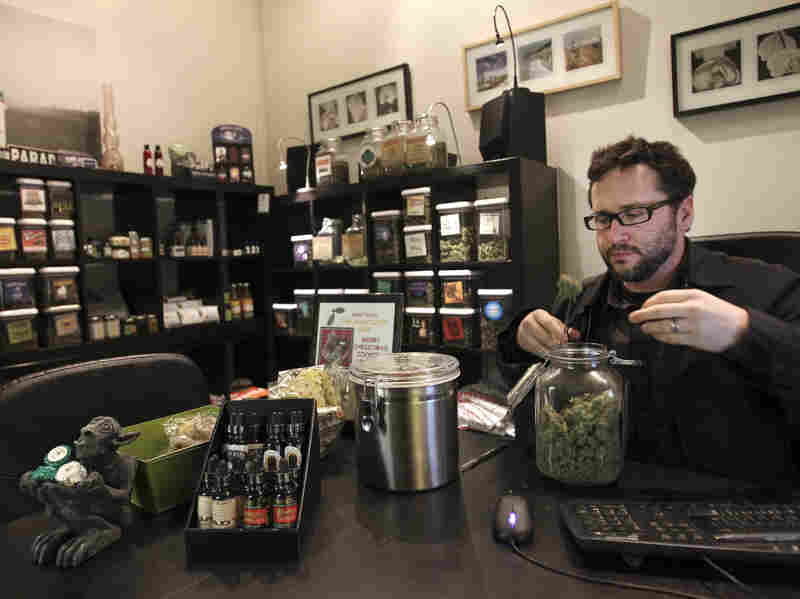 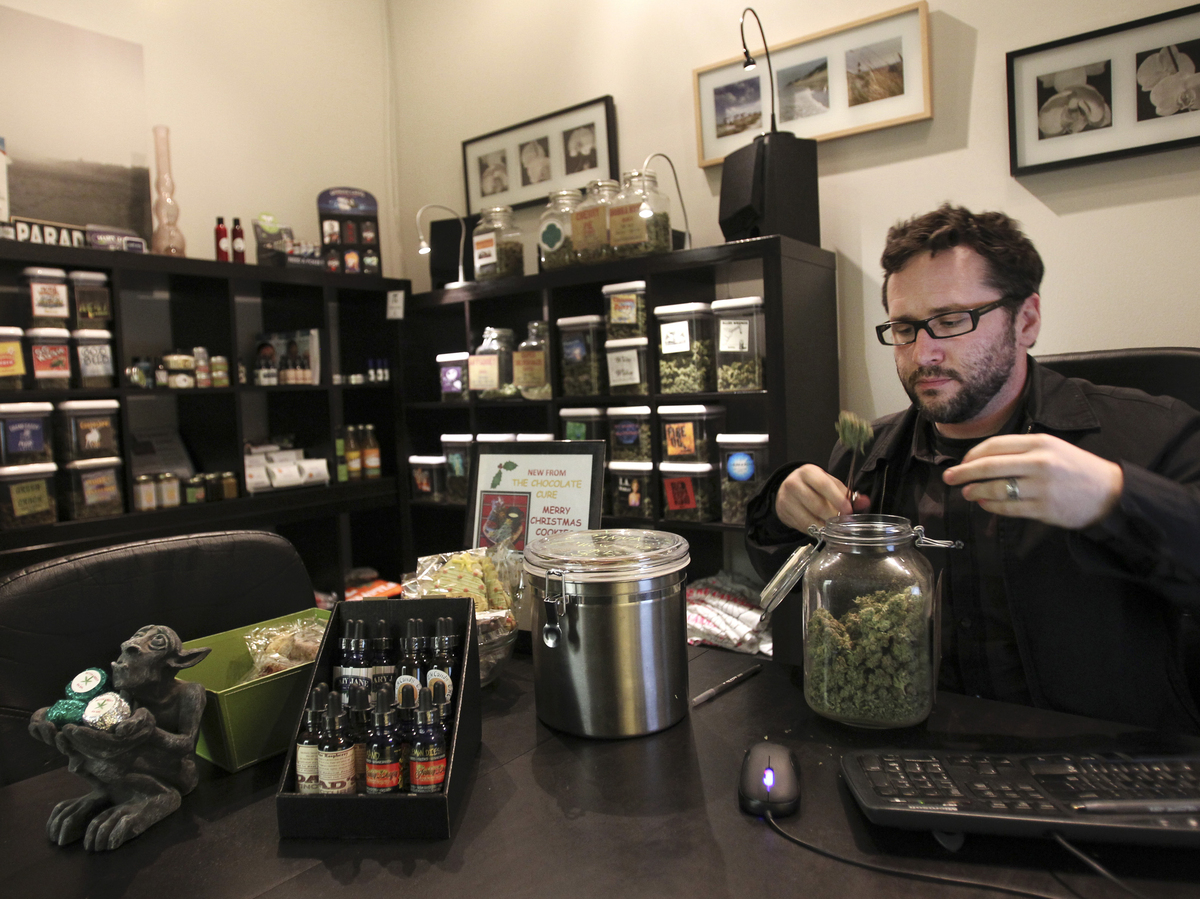 Chris Guthrie, vice president for operations at Canna Pi medical dispensary, inspects a medical marijuana product at his clinic in Seattle on Monday. Marijuana will be legal in Washington state from 12:01 a.m. Thursday.

Marijuana is legal in Washington state as of 12:01 a.m. Thursday, but the ballot initiative that made it legal last month contained a new DUI standard — a deal-sweetener for hesitant voters — that may actually make life riskier for regular pot users.

The new law makes it legal for adults to possess up to 1 ounce of marijuana, but illegal for that same adult to drive if the THC content of his blood reaches 5 nanograms per milliliter.

Steve Sarich, who uses medical marijuana for back pain, says he wakes up at four to five times the legal limit. Six weeks ago, he said that if the legalization initiative passed — along with the new DUI standard — he'd either have to hire a driver, or leave Washington.

"I haven't left the state yet," he says. "But, you know, I realize that I take my legal life in my hands every time I do get behind the wheel."

Sarich ran the most vocal opposition campaign to the initiative — mainly on the issue of the new blood-content limit. He's convinced that he and other regular users of medical marijuana will be stuck on the wrong side of the law.

Peaquin says driving impaired by pot was already illegal. What changes now is that pot users have to learn to think in nanograms per milliliter. Even for someone who has built up a high tolerance, Peaquin's advice is simple.

"I'm telling him, do not get behind the wheel," he says, "even if he's feeling totally fine, because the mere fact of having that level in his blood and driving a car makes him a criminal."

Surprisingly, the advice from the Washington State Patrol is a mellower. Spokesman Bob Calkins says pot users should keep in mind that troopers won't be pulling people over for random blood tests.

Besides the DUI question, pot users in Washington face another conundrum: Where to get it? The new law legalizes possession, but there's still no legal way for recreational users to acquire it. The law calls for the state to set up a network of licensed growers and pot stores, but that will take at least a year, assuming it's not challenged by the federal government. Marijuana is illegal under federal law.

In practice, though, pot is readily available, especially in places like Seattle's University District. You could go with the dealers outside the Jack in the Box restaurant, or just walk into a medical marijuana store.

Three young guys are sipping Starbucks cups filled with mushroom tea; they plan to round off their afternoon with a bit of weed. Questions about Thursday's legalization are met with a shrug.

"Nothing really changes for medical card members. If you have your cannabis card, then you're set," says one of them. "Nothing changes. You can still go to the dispensary and get your buds."

The reality is that it's easy to get medical marijuana cards for complaints like "anxiety," usually from alternative medicine clinics. Still, some obstacles to the untrammeled enjoyment of marijuana do remain in Washington. One pro-pot group was all set to hold a legalization party in a county-owned facility until officials realized it would run afoul of the state's strict ban on smoking — any kind of smoking — in public spaces.