After African-American and Latino voters turned out in record numbers to reelect President Obama, leaders for both groups are turning up the pressure on him to return the favor.

They say that minorities, who put aside their disappointments with Obama's first term to support him again, now expect the president to spend his political capital on policies that will help their communities begin to recover from the recession. In the post-election euphoria, some leaders claim, certain voters are saying, "It's our turn."

"I hear that everywhere I go," says Rep. Emanuel Cleaver, D-Mo., outgoing chairman of the Congressional Black Caucus. "You're hearing it from African-Americans and Latinos, including Latinos [in Congress] here on the Hill. ... I'm already trying to figure out how to respond to that — 'Well, we're the ones who pulled him over the top in Ohio, we're the ones who pulled him over in Florida. You owe us.' " 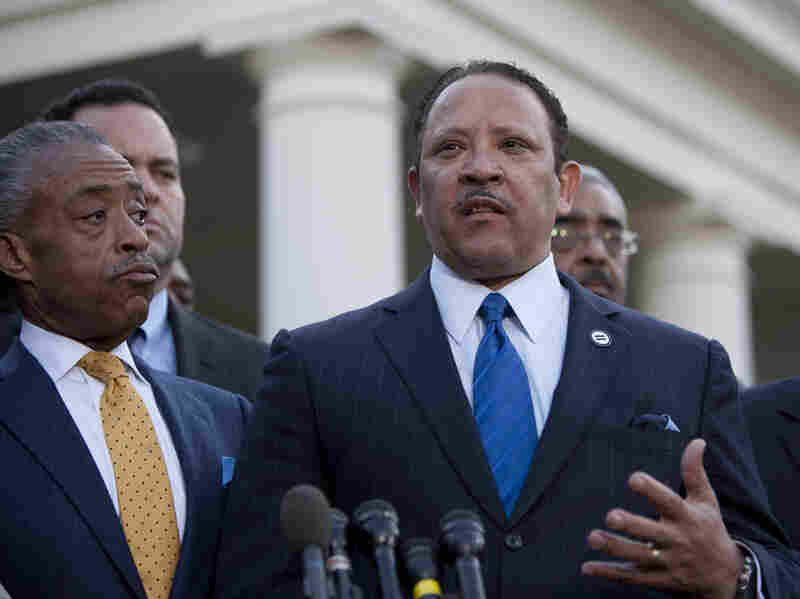 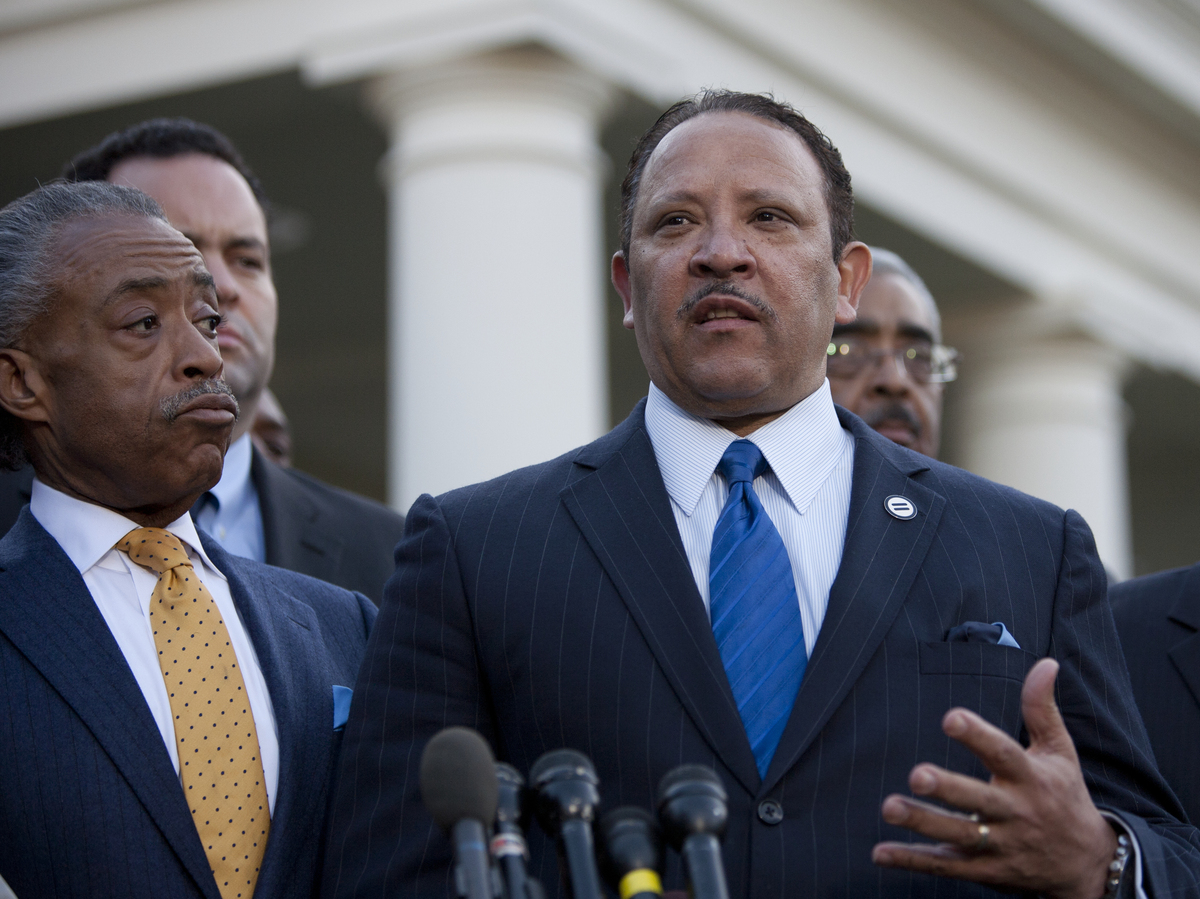 On Monday, nearly 60 black leaders held a closed-door meeting in Washington to begin crafting an agenda to be delivered to the White House and Congress early next year. The leaders said the policies will be culled from five areas: economic inequality, education, health care, criminal justice and voting rights.

"Against the backdrop of high unemployment, a difficult set of economic challenges, a great deal of hope and promise that we have in our president's second term, we felt it was important for us to come together," Marc Morial, president of the National Urban League, told reporters after the meeting.

Morial's organization, along with the NAACP, the National Coalition on Black Civic Participation and the National Action Network, convened the event.

As the economy has slowly improved, the fortunes of many blacks and Latinos remain stalled. The nation's unemployment rate dropped in November to 7.7 percent, but remained at 10 percent for Hispanics and fell a percentage point, to 13.2 percent, for blacks.

A Mandate To Serve All

Obama's economic policies have been criticized from all quarters. But as the nation's first black president, he has faced lingering questions about his commitment to address the needs of minorities, especially through the use of targeted measures.

Obama has favored broader programs designed to address economic conditions for all Americans.

However, he has taken political risks on behalf of other core supporters, such as gays and lesbians. He ordered the Justice Department to stop defending the constitutionality of the Defense of Marriage Act. He ended the military's "don't ask, don't tell" policy, which banned gays and lesbians from serving openly, and he announced his support for same-sex marriage. The moves energized the lesbian, gay, bisexual and transgender community.

This summer he solidified his support with Latinos by halting the deportations of young illegal immigrants.

Blacks, having invested great stock in the re-election of one of their own, now hope he will turn to more of their concerns.

"I do think there are heightened expectations. But I think people will figure out very quickly if that expectation is real or not, based on how he behaves," says Emory University political scientist Andra Gillespie, author of the book, The New Black Politician: Cory Booker, Newark, and Post-Racial America. "I think everybody is kind of waiting with baited breath to see how he responds to the lack of a re-election imperative. This is where we may see what President Obama is made of."

For Latinos, the November election has sparked momentum for their top issue, immigration. Congressional Republicans have since embraced immigration reform as a priority. Bipartisan talks are under way in the House on legislation that could be introduced early next year.

Obama has said Congress should "seize the moment," yet Latino leaders insist that voters have given the president a mandate to lead the effort. Some Latino leaders believe Obama should have fought more aggressively to push the DREAM Act through Congress in 2010. (The bill would have established a path to citizenship for young people brought to the United States as children who attend college or serve in the military.)

I think everybody is kind of waiting with baited breath to see how he responds to the lack of a re-election imperative. This is where we may see what President Obama is made of.

Latinos also criticized the Obama administration, before it changed its policy, for deporting a record 1.1 million people in three years.

"Not only the president but others have said in the past, 'How much political capital do we need to spend on this issue?' Everybody understands now that you need to spend all of it," says Rep. Luis Gutierrez, D-Ill. "With the same vigor and energy that Latino people voted for this president, he should do this."

For African-American groups, it's not so simple as identifying a single priority. Many of them separately advocate for policies that address such issues as disproportionately high unemployment, low student achievement and high incarceration rates.

They also have differed about publicly criticizing Obama and whether doing so provides fodder for conservatives and weakens the president politically.

Cleaver and other black politicians acknowledge tamping down their criticisms this year to avoid endangering the president's re-election chances.

Scholar and activist Cornel West, a former Obama supporter, is one of the few prominent blacks who have remained outspoken critics. Shortly after the election, West said he was "glad there was not a right-wing takeover, but we end up with a Republican, a Rockefeller Republican in blackface, with Barack Obama, so that our struggle with regard to poverty intensifies."

In response to criticism, the White House has more aggressively promoted the positive impact that Obama's policies have had on blacks, such as increased funding for historically black colleges and universities and for Pell Grants for college students, and the Affordable Care Act. (Blacks and Latinos make up an estimated 50 percent of the uninsured.)

But even some Obama supporters say his broad policies must be more narrowly tailored. Ron Busby, president of U.S. Black Chamber Inc., which represents business owners, says most black companies aren't large enough to qualify for many of the loans issued by the Small Business Administration.

Busby, who served on a committee that advised the Obama campaign on business policy, decries the decline under the Obama administration in the number of federal government contracts awarded to black vendors.

"You can say rising tide floats all boats, and that's great to say if we're all in the same boat. But we're not. My boat," Busby says, referring to black businesses, "is sinking."

As a practical matter, there is wide agreement that a "black" or "Latino" agenda from Obama supporters has little chance of passing the Republican-controlled House, particularly if it would increase spending.

One idea discussed at the Monday meeting was the shaping of "race-neutral" programs aimed at communities with sustained high joblessness. Such measures were included in the president's jobs bill that failed in the House last year.