Accessibility links
Movie Reviews - 'Hyde Park on Hudson' - A Historical Comedy That Hangs On The Details Written by an American and directed by a Brit, Hyde Park on Hudson reflects the relationship between the two countries in both plot and production. Critic Ella Taylor says Bill Murray makes a fine FDR, and the film does justice to history's little details. (Recommended)

A Historical Comedy That Hangs On The Details

A Historical Comedy That Hangs On The Details 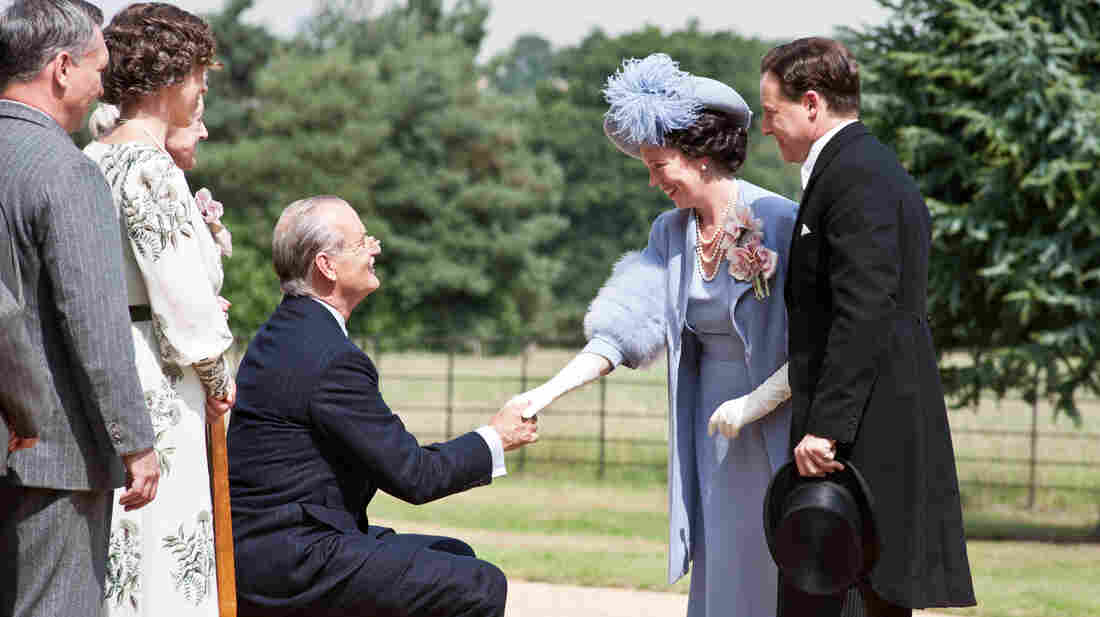 In Hyde Park on Hudson — a sly, modestly subversive dramedy about a crucial weekend meeting between England's King George VI and American President Franklin D. Roosevelt on the eve of World War II — the diffident young monarch (Samuel West) confides his frustration over his lifelong stutter while the two men enjoy a postprandial drink expressly forbidden by their womenfolk.

"That damn stutter, these useless legs," says the president (Bill Murray), going on to bestow fatherly advice about the need to project confidence. That counsel gives George a much-needed ego boost while clarifying why, in real life, Roosevelt was never seen in public using his wheelchair. Ever the canny politician, Roosevelt tells the younger man that "people don't want to see our flaws."

Times have changed, I guess, but this hugely entertaining movie is about the wisdom and — with trenchant wit and sympathy — the human flaws in one of America's most idealized heads of state.

Politically a lot was riding on that June 1939 weekend in the beautiful Hudson Valley retreat, to which the king and his prim bride, Elizabeth (Olivia Colman), had been sent to solicit American support in a war Britain couldn't hope to win alone. Sharply written by an American who lives in the area, Richard Nelson, and directed by Brit Roger Michell (Notting Hill, Persuasion), Hyde Park is about the birth of the two countries' special relationship — and at least one other, more intimate connection besides. The second one came to light when letters between the president and his fifth cousin, Daisy Suckley, were found under Daisy's bed after her death.

The weekend plays out through the eyes of Daisy, portrayed by Laura Linney as a timid virgin plucked from genteel post-Depression poverty to become the president's escape from the demands of his office — his confidante and more. To that degree, the movie is Daisy's take on their relationship, and the surprises it springs on an unworldly woman.

But the movie keeps peeling back like an onion to reveal more layers in Roosevelt's complicated domestic arrangements, observed with slightly wistful fascination by George and with horror by his very proper missus, whose idea of meeting Americans is waving at busy field hands. 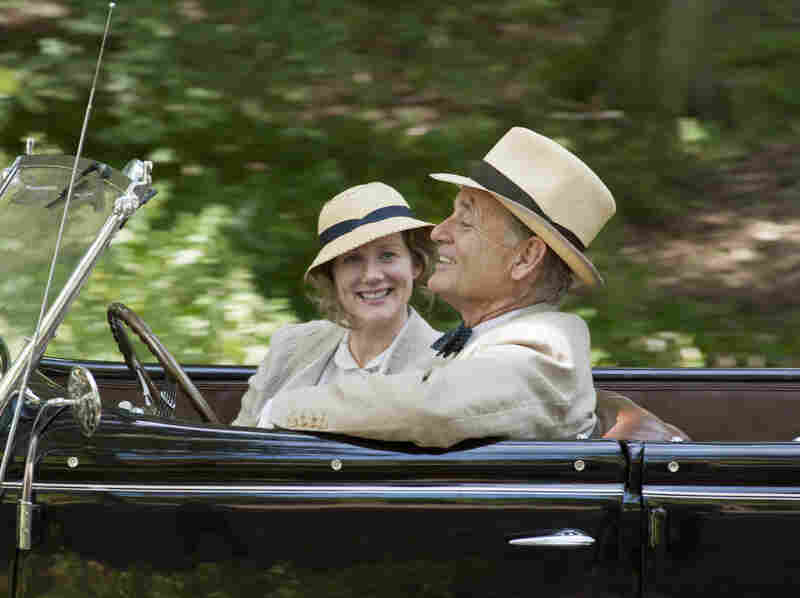 The film's story is told in large part from the perspective of Roosevelt's distant cousin Daisy (Laura Linney), with whom he carries on an affair. Nicola Dove/Focus Features hide caption 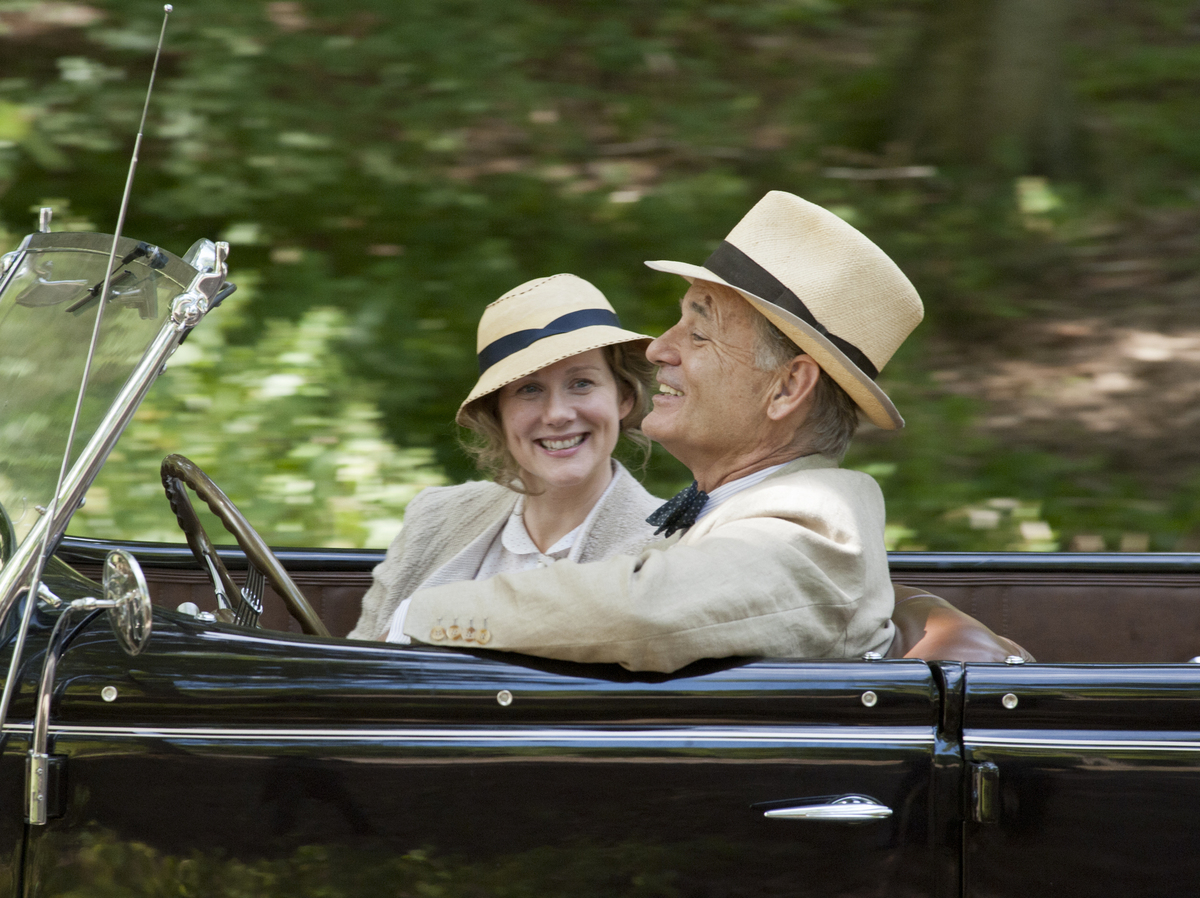 The film's story is told in large part from the perspective of Roosevelt's distant cousin Daisy (Laura Linney), with whom he carries on an affair.

The star of Ghostbusters, Groundhog Day and Wes Anderson's quirky postmodern comedies may seem like an odd choice to play Roosevelt. But there's no miscasting Murray, precisely because he never disappears into his characters. If anything he disappears into himself, and dares you to follow him there, implying there are secrets he may or may not share.

In Hyde Park, actor and character share an evasive cunning beneath the hail-fellow-well-met charm that made Roosevelt such a hit with the press and the public. Here, FDR is also an ambivalent overgrown schoolboy trying to keep everybody happy while stomping all over their feelings. He's always running away from the women who keep his life going: his hypervigilant mother (Elizabeth Wilson); his devoted secretary, Missy (Elizabeth Marvel); his wife, Eleanor, played by a discreetly butch and very funny Olivia Williams as a no-nonsense type who has better things to do than drop curtseys to, as she plainly sees it, a couple of useless royals; and Daisy herself, compliant and complicit. Until, that is, the scales drop from her eyes and she comes to see FDR the man, not the myth.

The camera whirls and twirls around these strong women, wickedly relishing the way they compete and collaborate to make him into the sage statesman who will brave his own country's isolationism and enter the war. Hyde Park may look like another of those immaculate, slightly waggish period pieces about minor scandal in the better homes and gardens of transatlantic blue bloods. But it is also a deadly serious comedy of international manners alerting us to how the path of history hangs on seemingly minor details.

As for George, whom we last saw played by a lugubrious Colin Firth in The King's Speech ... well, Firth is a major stud and all that, but West brings to this reluctant king a more persuasive speech impediment, and more important a nascent sense of fun. Despite the earnest propriety he shares with his hilariously paranoid wife (upon whose empire the sun has somehow failed to set), there's an adorable cutup and a hedonist just waiting to be sprung in this George. The Yanks may be just the people to let out his inner child, but according to Hyde Park, it's a tray full of hot dogs that clinches the deal.