Accessibility links
3 Strings And A Snakeskin: Okinawa's Native Instrument In subtropical Japan, the sanshin is a ubiquitous part of life. The instrument even follows Okinawans long after they're gone — played at grave sites, when families pay respects to their ancestors. 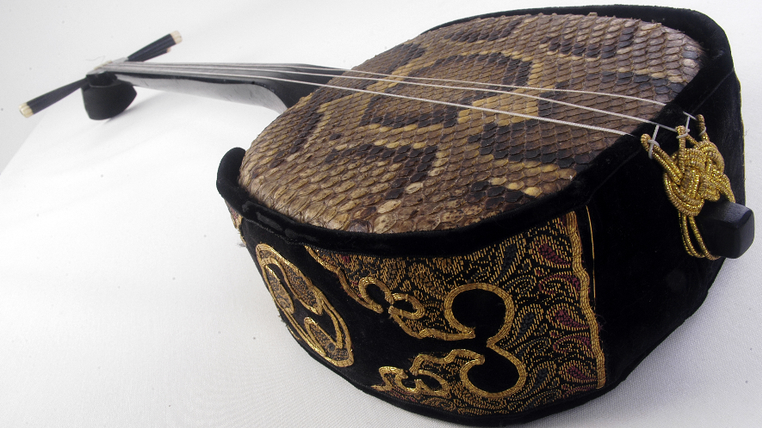 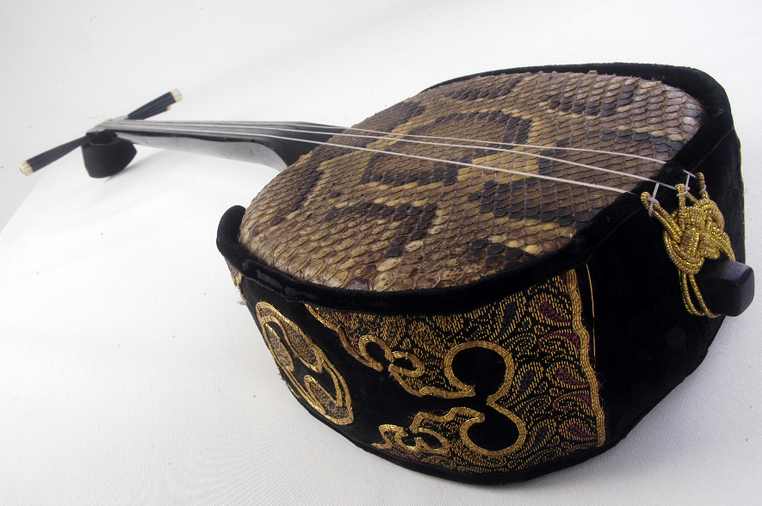 In subtropical Japan, the sanshin is a ubiquitous part of life.

Jamaica has reggae and Hawaii has its distinct, Polynesian-influenced melodies. But far more obscure — because it's not sung in the English language — is another island-music genre: the native songs of Okinawa in subtropical Japan. Okinawan music remains enormously popular at home, and has been featured in collaborations with Western artists like Ry Cooder, as well as the world-music label of David Byrne.

In the capital of Naha, student Kazuki Oyama sits cross-legged on the campus of Okinawa University and runs through a number with his performing-arts club. The long-necked instrument they're playing looks like a banjo, but it's covered in snakeskin and has just three strings. Oyama says the simple-looking instrument — known as the sanshin — is tough to master.

"Unlike the guitar, you pluck the strings one at a time and the music is written not as notes, but as Chinese characters," Oyama says.

British writer John Potter was so besotted with the Okinawan vibe, he moved to the city three years ago.

"More than anywhere else in Japan, Okinawan music still plays a big part in people's lives," Potter says. "Even though younger people might be more interested in modern pop music and hip-hop and things like that, they would also — even if they didn't have a tremendous interest in Okinawan music — they would also know about it. It's just there all the time."

Okinawans are renowned for their longevity, strong community ties and laid-back attitude. That's kept traditional music front and center as native music grew irrelevant in the rest of modern Japan. Music here is so ubiquitous, Potter says, it even follows Okinawans long after they're gone — it's played at grave sites, when families pay respects to their ancestors.

"Since this is music by the common folk, the themes are love, romantic problems, or someone got drunk and in hot water," Oshiro says. "They're like songs anywhere. It's also about life lessons and hopes for a good harvest."

"The sanshin comes in between the words; it fleshes out the words, fills in the spaces in between the words rather than playing melodies," Potter says. "So it's used in a kind of different way to maybe a guitar accompaniment. You won't find a big sanshin solo in the middle of the song — it's simply used to accompany the words and make the words stand out more."

Ethnomusicologist Matt Gillan says this music — once the culture of a scorned Japanese underclass — has been dramatically rehabilitated in recent decades. He recalls an elderly sanshin musician who was warned early in his life to find a different career.

"The sanshin had this image of rather undesirable characters who drank too much and messed around with women," Gillan says. "So he became a professional musician anyway. About seven years ago, he was made a 'living national treasure' by the Japanese government."

Sanshin has also been blended with Western instruments to create a hybrid, like in the song "Haisai Ojisan," by local legend Shoukichi Kina.

Repeatedly subject to foreign occupation, most Okinawans, remarkably, don't sing the blues, but have maintained a sunny outlook on life — an attitude that colors their music. This strikes many outsiders as ironic, given the former independent kingdom's turbulent and tragic history. In their art, as in their lives, Okinawans keep saying that things will all work out in the end.